Calling a TV series about women’s rights a “feast for the eyes” sounds wrong, and pitting two groups of women against each other based on looks feels like a violation of my women’s college degree. But FX’s historical drama Mrs. America is a visual delight, using the characters' beauty routines to convey their political alignment. On one side of the aisle are the women of Stop ERA, who argued that increased freedoms for women would undermine conservative family values. I disagree with their politics but I am fully there for the eyeshadow—in the show, card-carrying members can be spotted by their baby blue lids. On the other side lies a who’s who of second-wave feminism: Gloria Steinem (played by Rose Byrne)! Betty Friedan (played by Tracy Ullman)! Florynce Kennedy (played by Niecy Nash)! For these roles it’s about style and naturally healthy, dewy skin. I couldn’t decide which look was better—each time the scene changed to check in on one group or the other, I felt newly inspired.

“In designing this whole show, my team and I were really conscious of the distinct visual difference between the ‘pros’ and the ‘antis,’” the show’s lead makeup artist Jordan Samuel explains over the phone. “Nowadays, I don’t think you can necessarily identify what someone’s beliefs are from their appearance,” he adds, “but we definitely wanted to make sure that the audience could tell the difference when they saw the two groups on screen.” He collected research from all the obvious (old makeup ads, magazine tears) and ingenious sources (old high school yearbooks). “You can literally search them geographically, and by year,” Samuel tells me. “You’d be surprised.” 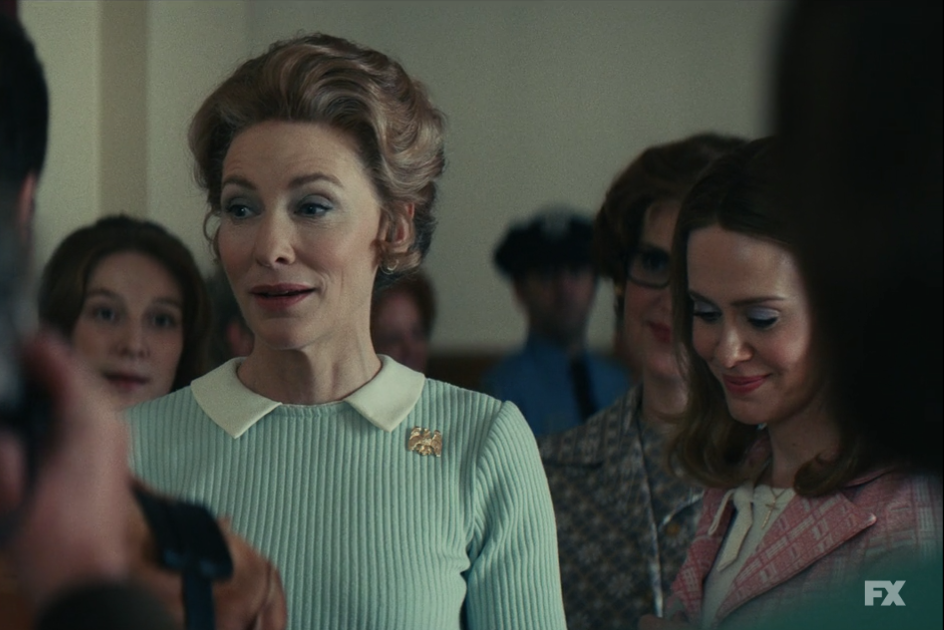 Cate Blanchett’s personal makeup artist Morag Ross designed the makeup for Phyllis Schlafly, but Samuel used photos of the real Schafly to suss out what the makeup for the other Stop ERA women should look like. “You could imagine them putting their purse on their lap, taking out a compact, and press-powdering their nose in a restaurant or in the middle of a meeting,” he explains. At the time, blue eyeshadow was a middle-of-the-road, conservative, feminine shade. “I mean, Barbie had blue eyelids,” he says. On the show the blues were a sheer, sometimes-pearly robin’s egg that was never too deep or bright. “There’s a level of desaturation that really makes something from the 70s look like something from the 70s,” Samuel tells me. “Theatrical makeup wouldn’t work, so a lot of the eyeshadows we ended up using were from the drugstore.” His team bought up blue Covergirl, Maybelline, and Revlon palettes, and stuck to the pale shades. It’s easy to get the exact look at home. 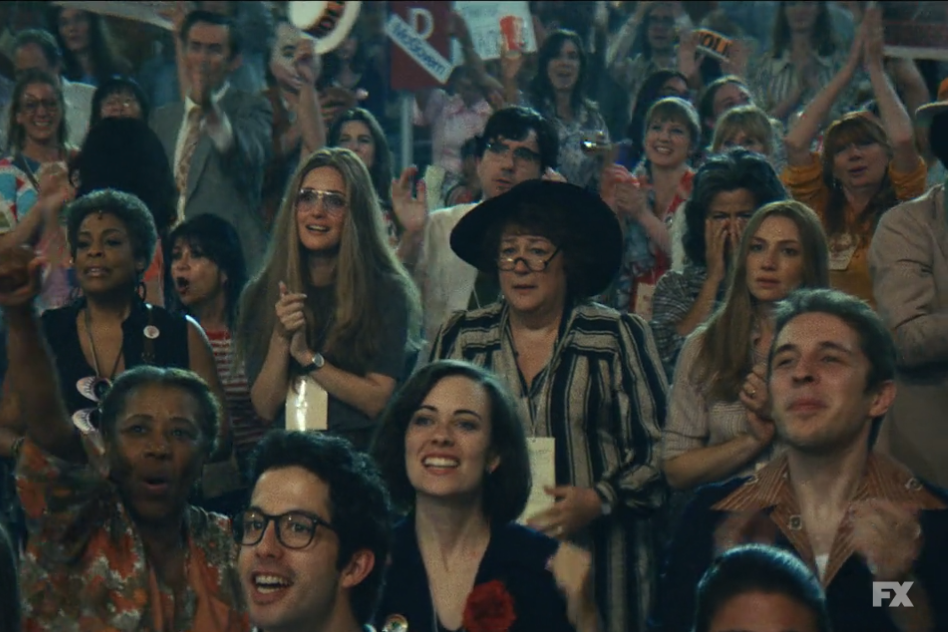 The pros rejoice at a rally

“Since the antis were contrived and powdered,” says Samuel, “the pros were glowy, with that typical ‘70s outdoorsy, sunkissed look.” The blank slate of natural skin sets the stage for signature hair (Steinem and Friedan) and accessories (Kennedy, Shirley Chisholm, and Bella Abzug) to shine. For the skin, Samuel left the actors fairly natural, just cleaning up redness and hyperpigmentation with targeted applications of concealer. And when fuller-coverage was needed, Samuel and his team went back and filled in some freckles, either using an airbrush, spattering them on with a spoolie, or drawing them by hand. But most important to the look was the obvious lack of powder. “We really had to keep up with the actors on set to make sure there wasn’t too much shine,” he tells me. Under bright, hot studio lights, a forehead oil slick was an inevitable enemy.

The rest of the show’s makeup magic is subtle, but impactful. Byrne got sleepy, Steinem-esque eyes under her tinted aviators thanks to thick liner and some false lashes applied strategically to the outer corners of her lids. Samuel erased Ullman’s brows with adhesive and concealer, and drew them back on significantly lower to turn her face into Friedan’s.

In addition to using highlight and contour for character work, Samuel also used it to believably transition the actors through a show that spans 10 years. “In the beginning of the show, we’d de-age the actors by cleaning up around the eyes, highlighting shadows away, and working with temporary lifts. Then, as time goes on, shadows become deeper, highlight areas become a little more pronounced or bulbous, or maybe you’d put a shadow where you originally had a highlight.” It sounds like a lot, but as Samuel explains, “It takes very little to make a lot happen.” The results leave the actors strikingly similar to their real-life counterparts, which lets the decorative makeup decisions look lived-in, not costumey.

Luckily, in the real world you can like blue lids and dewy skin, no pitting necessary. You can even wear them together—a little glow on the cheeks modernizes powdery lids, and a wash of blue dresses up bare skin. Actually, the combo sounds a bit like a Glossier Skywash ad, no? The best of both worlds, and all it took was five decades.