Darroch Putnam: And that's how I got involved. We met each other in southern California, got together, and moved to New York nine years ago. By the time he started working with flowers we were already married. He would style arrangements at home on the weekends, and then he would put it on his social media. That's how it blew up. We started doing events, dinners. He did a Vogue editorial for their site soon after that, which really snowballed things.

MP: The Vogue article was my first editorial gig. They wanted me to recreate a Dutch still life with flowers. It really opened up my mind, seeing those old paintings. Looking at them from an aesthetic point—composition and color—it really influenced everything we do now.

MP: With flowers I'm primarily the creative, and Darroch does everything else.

DP: I think that before us, flowers were just another thing on the checklist for an event. We created romance with flowers—it's lush, it's verdant, it's bringing the outdoors in. We shifted the focus where if you hire us for an event, you're making the flowers the center of conversation. And we are completely self-taught. Our first few weddings were super small and we just learned by doing. In the beginning we said yes to everything and just learned that way. Finding an outlet that inspired us and finding out how to make money from it was an ever-changing thing for us for sure. We've been in business for five years and even now we're pivoting to, ‘OK, we've done weddings, we've done events, we've come out with a book, what next? How can we still stay creatively inspired?’ [Flower arranging] is an industry where it's very easy to become stale and do the same things over and over again. Yes, people hire you for that, but the biggest con is that it gets harder to stay creatively inspired.

MP: We really pushed making flowers an art form, and not just a centerpiece. 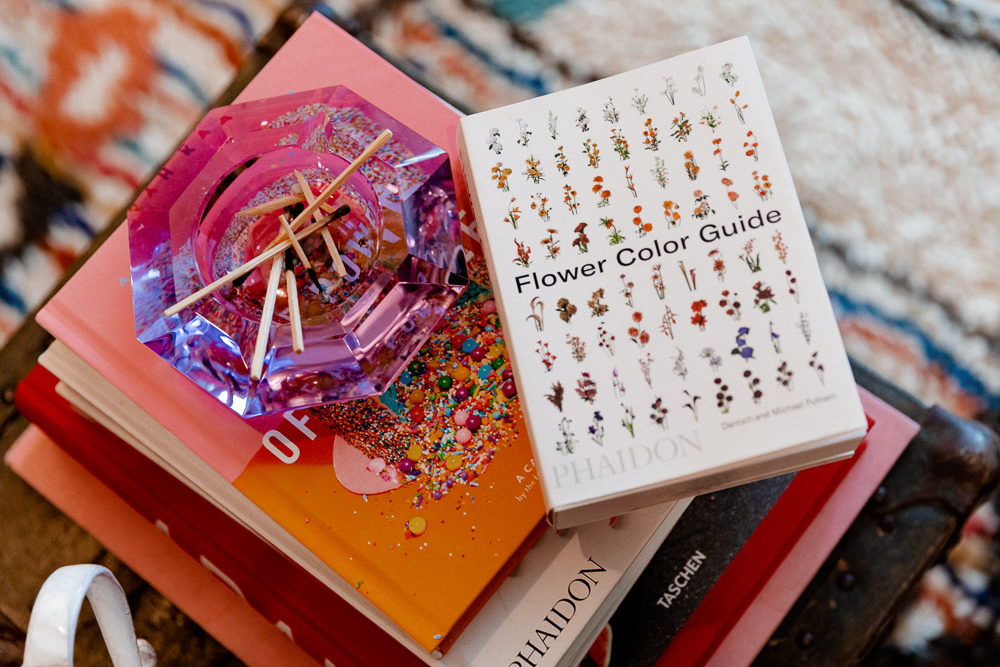 DP: For me, doing Gwyneth Paltrow's wedding was an amazing moment. We were hired to do exactly what we do best—to execute our own vision—and it was so beautiful. There was so much trust put into us. It was a very self-affirming thing of, 'Oh yeah, we can fucking do this.'

MP: Last April we had a 14-page spread in Vogue, and that was really cool because we got to work with Grace Coddington and Steven Klein, and we created this crazy fantasy set. It was amazing. And also intense—it was three 14-hour days.

DP: It's funny because flowers are always work. Even bringing them home is work, so we don't have a lot here. One thing that we’re working on now is developing an online solution to help people learn about flowers. There really is no amazing educational tool out there. We have workshops, but they're expensive. What we’re making for our website is basically our book but a much more expansive concept.

HAIR
MP: I take longer to get ready in the morning [than Darroch]. I don't wash my hair every day because it's really curly and I don't want to dry it out and get all frizzy. I’ll rinse daily, but I only wash it maybe twice a week, and on those days I use Aesop shampoo and conditioner. They also have a nice scalp oil that I like using before I go to bed—it moisturizes really well. Another great product for hair is the Violet Leaf Balm that Aesop makes. It's super moisturizing and amazing for curly hair. And so is the Ouai styling cream. That's the best.

DP: I use the Ouai styling cream right when I get out of the shower, and then when I want to wear my hair in a part I use the Ouai matte stuff. To add texture to my hair, I use Kiehl's Texturizing Clay. My hair is too fluffy if I don't put anything on. One of our friend's was losing their hair and they recommended this supplement called Nutrafol to me. It's expensive, but it's really incredible. They market it as a hair supplement but it's also an overall body supplement. 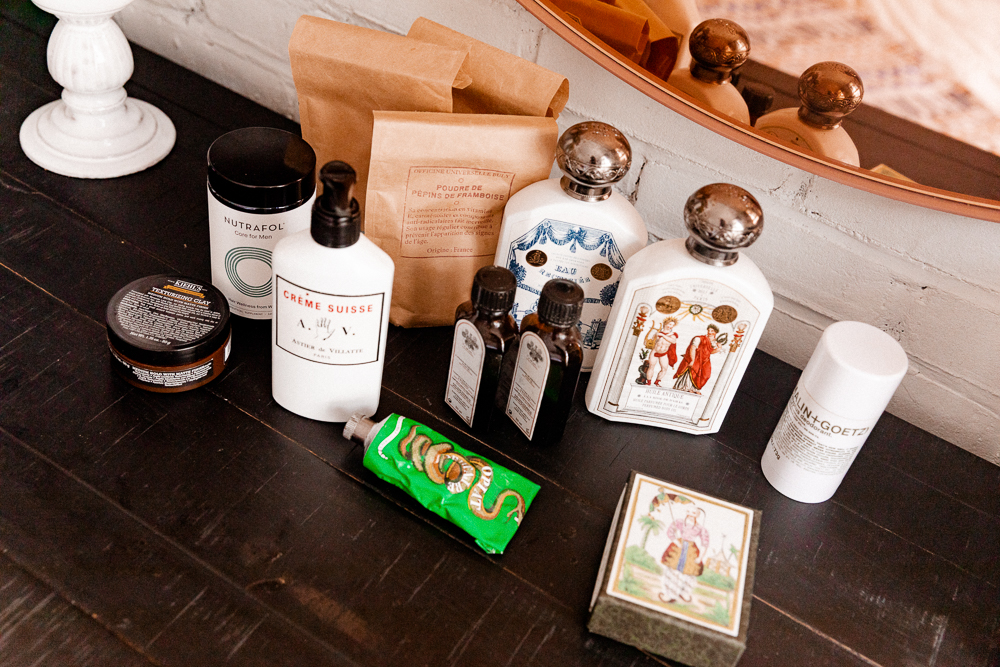 SKINCARE
MP: Sometimes when my face is extra dry I'll cleanse with the Parsley Seed Cleansing Oil from Aesop. I know I’m saying a lot of Aesop products, but I really like them! [Darroch and I] use the same moisturizer from Aesop, the Primose. I have really sensitive skin and I feel like it’s just easy on my skin. And we love the Caudalie Beauty Elixir—it's really moisturizing. I love to exfoliate my face with Aesop Exfoliant Paste—it has quartz in it and so good. I use it three times a week. I also love masks. Buly has this book of recipes for your skin, and they sell these crazy oils in the store. You talk to someone there and they're like, 'This, this, and this is the best combination for your skin.' So I take those and make my own masks. I use acai oil and cassis oil, and then I mix those with different dry ingredients. I have red clay, raspberry seeds, and raw cocoa powder. The cocoa powder is really grainy, so it's nice as you're washing it off because it's exfoliating. And then I put apple cider vinegar in my masks, instead of water. [Darroch and I] also just started using Supergoop Unseen Sunscreen. The texture is crazy—it feels like a dry oil and it literally makes your skin feel like silk.

DP: The texture is so not slimy at all, it feels amazing. We also use a tea tree face wash from Desert Essence to avoid breakouts. I always start breaking out when it gets hot outside. The Anti-Blemish Chamomile Mask from Aesop is good, too. At night I use this cleansing water from Buly that I rub on with a cotton swab instead of washing my face. And I love their toothpaste, which I think is so chic. I think it also works kind of OK? [Laughs]

MP: You know what’s really good? Biopelle. The woman who does our Botox, Jessica Plotnick...

DP: That's important to mention! We see Jessica Plotnick every four months to get Botox on our forehead and around our eyes!

MP: ...And she recommended Biopelle eye cream. She said it's literally the best. They use snail stem cells or something—I don't know. I really like it. 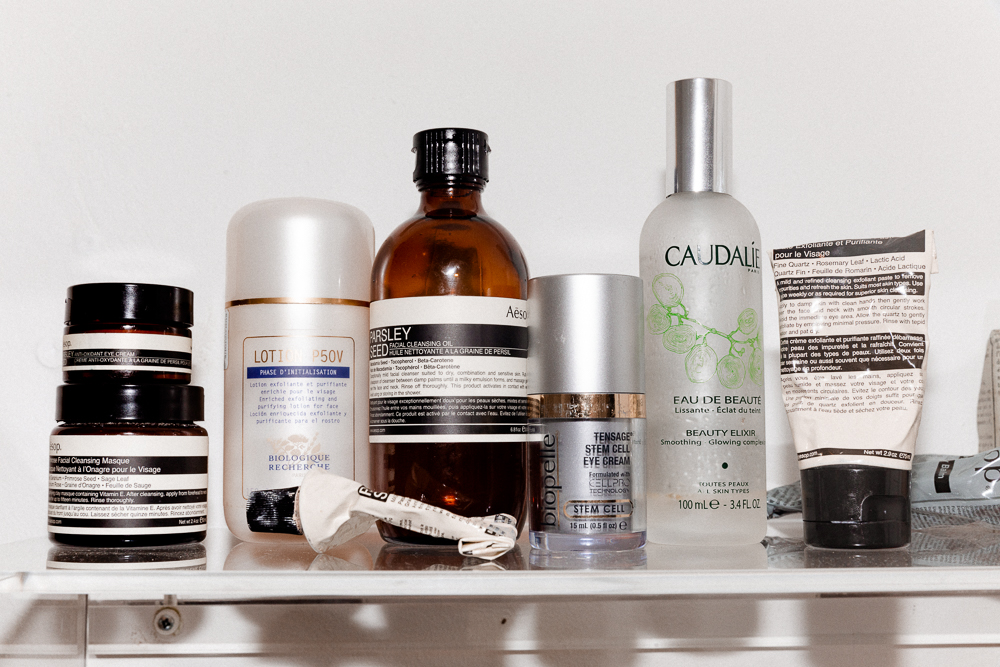 DP: He started getting Botox before I did, about a year ago. I think our job is very stressful and I started getting lines, so I was like, ‘fuck this.’ Our dentist is Jennifer Plotnick and she runs Grand Street Dental in Williamsburg—she's one of the best dentists in New York. And her sister does Botox and fillers—she's one of the best known aestheticians in New York.

BODY + TATTOOS + FRAGRANCE
DP: Ouai has a really nice exfoliating scrub that I love to use in the shower. When I get out of the shower, I use the Buly body oil, which I think is so much better than moisturizer. One thing I hate about Aesop is that their lotions don't absorb! But the Buly oil is a dry oil and absorbs so nicely. It smells like roses. It's so French, so beautiful.

MP: The smell is absolutely incredible.

DP: I started getting tattoos when I was 18. The most recent artist that [Mikey and I are] seeing is based in Warsaw—his name is Patryk Hilton, and we see him when he travels to London and get tattoos there.

MP: To take care of our tattoos we use Aquaphor.

DP: And moisturizing after every shower helps maintain them.

MP: And we use the Aesop SPF 50 for the body because it smells amazing.

DP: And the Trader Joe's spray one is really good! And easy! 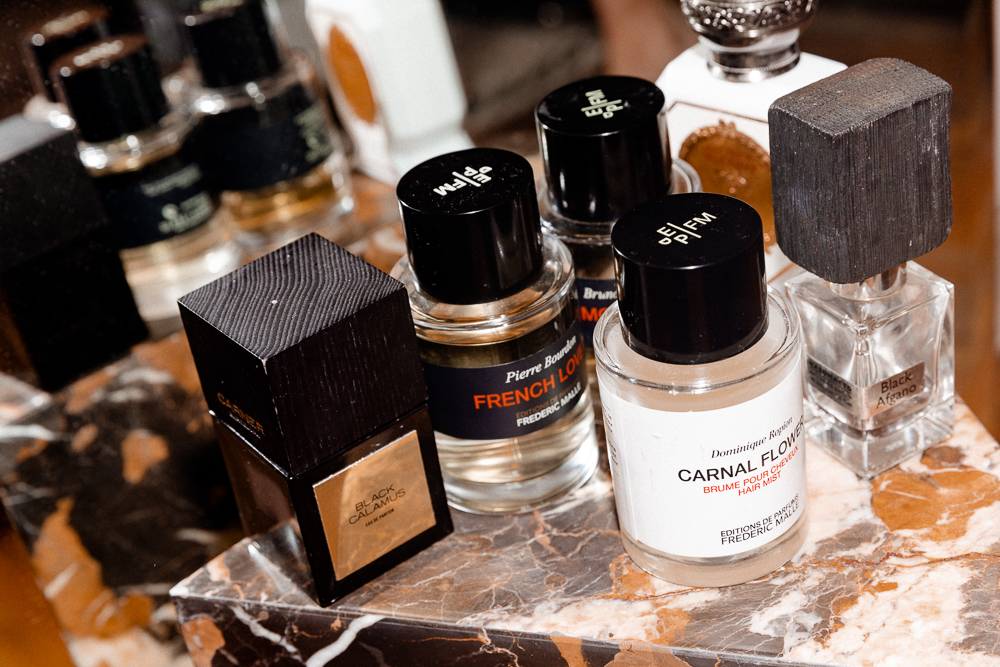 DP: For scents I love Frederic Malle. I use their Carnal Flower scent as a hair scent—it smells like Santa Barbara. It's a white flower and it's really beautiful. In the winter I like wearing Monsieur. It's kind of chocolatey with patchouli and vetiver. And I got French Lover—so good!

MP: I love Black Calamus from Carner, and I mix it with this Buly scent, Makassar. It's water-based so it doesn't last as long, but mixed with the Carner scent it’s really, really nice.

FITNESS + NAILS
DP: I work out five days a week. I see my trainer three days a week, and then I'll usually do a Pilates class, a spin class, or a barre class—barre is so hard! But I will say that I have seen more progress with my trainer in three months than I did working out on my own for three years. Classes are great, but it’s worth it to get that specific attention. I learned how to work out correctly, but to also breathe correctly. My trainer literally taught me how to breathe [laughs].

MP: I love cardio. I'm not a good runner, but I like running around Prospect Park or the East River.

DP: I'm also into crazy nail art. I see this guy Tak who used to be at Vanity Projects. I go every two and half weeks and it's such a cathartic thing. I just let him do whatever, and he hand paints the design. We usually do gel nails because of working with flowers. Being gay, for so much of my life I didn't want to be effeminate. I kind of suppressed that, and then in the last few years my attitude has been, 'Oh, I can be masculine, see my trainer and have tattoos, but I can also paint my nails and wear hair clips.’ I love when my nails throw people off. I watch people looking at them and I think that’s a fun visual.

MP: I used to bite my nails really badly, and when I started doing my nails I stopped. I don't do nail art, just solid colors. Red is my favorite color to get. Scarlet Red.

Darroch and Michael Putnamn photographed by Tom Newton in New York on July 1, 2019.