“I got into music from hanging around boys that couldn't rap. I knew I could rap better than they could, so I did. I’m still always being compared to this guy or that guy, and being called a female version of a guy. I'm a female version of Uzi, Yachty—fuck. It's ridiculous. I don’t think I ever got criticized for being too girly. Actually, I think my shit wasn’t girly enough. For a lot of the early shows, I would just ask for quick makeup. I was the type of bitch to say, "Can you just give me brows?" Some people ask why I don’t wear heels on stage. People have definitely asked me why I wear jeans on stage. It’s fucking weird that in the time we're in, a woman can't wear jeans on stage without someone saying she doesn’t care. Guys wear hoodies and jeans every show. It’s just clothes.

Makeup became a way that I could relax and meditate before a show. I never knew how much I needed that. I watch a lot of makeup tutorials. I like Makeupmouse—I think she’s in London—Sonjdradeluxe, Alissa Ashley. There’s this girl on Instagram called Melovemealot, and I like her stuff, too. I grab inspo from them, but they’ve also taught me about making the face what you want. I learned a new contour trick with my nose, and I’m having a lot of fun with that right now. I always wish my eyebrows were a little farther up, so sometimes I just draw them farther up. You kind of get to experiment. It’s like how, when I was younger and I really wanted a tattoo, I would draw it on myself over and over.

You can also make ugly beautiful. Everything Jazelle stands for is so liberating. Sometimes I'll give myself a bloody nose, sometimes I'll take my eyebrows away, sometimes I'll draw shit on my eyebrows. Sometimes I feel like it draws away from the real shit that I'm insecure about. For me, that’s probably my nose and my eyelids—once I started doing makeup, I wished I had bigger eyelids. I know, it’s fucking weird. But my best friend has eyelids like Cher—the sunken in kind—and it’s like a big canvas. With makeup, I can get bigger lids. The more I've gotten into it, the more I learn that it's about whatever makes you comfortable. 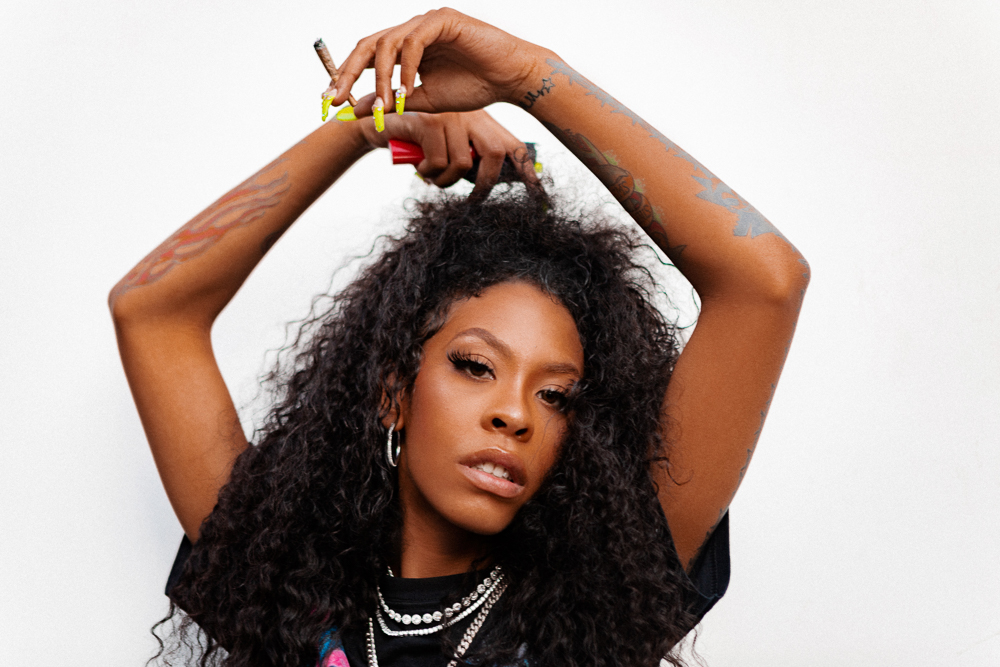 I always have a couple things with me in my bag. Moschino Pink Fresh Couture is my favorite thing. I wear it every day, and I bring it with me. I also keep Baby Tress with me everywhere I go. That's good for laying down baby hairs—I used to wear a lot of lace fronts, but I stopped. It’s also good after a show, if I'm sweating, just to refresh. I also have an eyebrow brush, and Krazy Glue. Sometimes my nails pop off random as fuck, and I hate missing a nail in a picture. If my nail pops off, I just use the Krazy Glue to stick it back on for the picture.

To take off my makeup I’ve been using Bioderma, the micellar water. Then I use the Bioderma serum—it’s like a gel, and it’s clear. I feel like it’s a drink of water for my skin. After that, I’ll put on the lotion version of it to seal everything. I’ve been using the Milk Sunshine Oil, but another thing I really, really like right now is the Tonymoly Rose Oil Stick. If I have two shows in a row and I’ve been sweating, it might cause a couple bumps that makeup won’t sit right on. I put the rose oil where I get dry, and then put foundation over it. It’s so bomb. I was using Huda Beauty foundation for the majority of the summer, but now my skin has gotten a little bit darker, so I’m using Black Opal stick foundation. I got it from the beauty supply store—nothing fancy. Then, I like to use the Rude Cosmetics Mimosa highlighter palette. A lot of times when I get palettes I only use one color, but with this one, I run the brush up and down, up and down the whole thing. If I'm going somewhere with my kid, I'm going to do a more natural glam. No lashes—just Milk mascara in the blue tube, freckles, and super thin eyebrows. I’ve been using this Maybelline Tattoo Eyebrow—the brush has three little pricks, so when you use it, it looks like hairs. I do a little contour, and a little highlighter. I like Diamond Ball-Out, the one that's super sparkly. 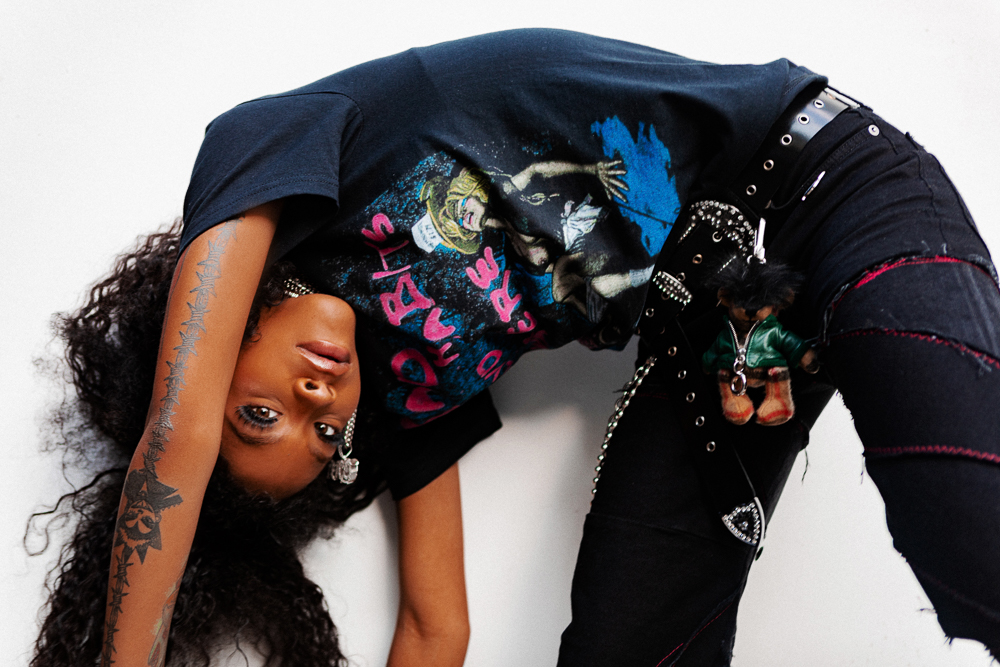 I'm really happy that I can inspire people with my looks, because I never even meant to do that. I was just having fun and trying to be creative—I love when I see people trying to do the same thing. I love Euphoria—it’s fucking amazing. I have so much respect for guys who wear makeup. Aminé will wear liners, and I love that. It's just about being creative and bringing that virtual vividness—I don't think it has anything to do with gender or being gay. It doesn't matter. You can be straight and you can put on eyeliner. Anybody can do art on their face.”

Rico Nasty photographed by Tom Newton at Afropunk in New York on August 24, 2019.