The Makeup On "Euphoria" Is Surprisingly Easy To Do At Home

When I sat down to watch Euphoria, I figured I’d be looking at a Gen Z-version of Skins—all drugs and teenage promiscuity, ripe for 15-year-olds to watch on their laptops when their parents think they’re asleep. But then I started watching and… The makeup. The makeup!!! Since the first episode, it’s all everyone’s been talking about. And while naysayers will point out that Euphoria’s makeup is too good to be realistic, seeing it reminded me quite a bit of the very real makeup I used to wear in high school.

In high school I was not cool and I hated everyone, save maybe five people. I wasn’t bullied—people either respected my particular brand of strangeness and left me alone, or had no idea who I was because I’d spend my free time in the art room bugging the teacher—but I wasn’t invited to parties, either. In lots of ways, the character on Euphoria I identify most with is Lexi. But my real-life high school style fell closer to that of Kat—I was into Hole and piercings, Ghost World and Daria, chokers that looked like dog collars and Ibsen plays and my boobs. I was really into being sad. I poured my heart out on a (secret, obviously) Tumblr site where I followed—in a weird, meta moment—Barbie Ferreira, a peripheral member of the Rookie clan I knew would become my best friend if I ever met her (she plays Kat on Euphoria now). I imagine the characters as Rookie girls, too—although Euphoria's lead makeup artist Doniella Davy told me that their Tumblrs might be filled with photos of Twiggy, Nina Simone, and ‘70s glam rock. A rare moment of truth-telling would reveal that maybe what I felt as shyness came off as standoffishness. Unlike Kat, I was a virgin, and would remain as such until after high school.

The way I interacted with beauty was informed by all of that. You know how they say to dance like no one’s watching? I used beauty like no one was watching, because I was pretty sure they weren’t. I dyed my hair lots of colors with Manic Panic (pink, blue, purple, red, black—my armpit hair was teal) and wore makeup that was either super goth or too, too saccharine. It usually wasn’t “pretty”—rather, I felt like it took me out of the matrix of pretty altogether. It was a blast! Then I got to college, saw a chance at normalcy, grabbed it, and stopped.

In Euphoria, Doniella uses makeup as a window to how the characters are feeling. “Makeup is emotionally evocative,” she told me, “and can express irony, playfulness, rebelliousness, joy, fearlessness, disorder, vulnerability, wanting to be loved, not wanting to be loved, delirium, elation, heartbreak, confusion, rebirth, surrealism, wonder, anxiety, and euphoria of course.” The expressiveness reminded me how intense feelings are when you’re a teen—years later, they still seem so vivid. “I wanted to create a euphoric version of reality through makeup,” Doniella said, “and use colors and textures that would be bold enough to hover above reality. I wanted to inspire people to recreate their own versions of the looks or try things they didn't feel were allowed or appropriate for everyday.” In truth, I hadn’t even thought about makeup like that in so long, let alone worn it—could I, still? Before the season came to a probably unsatisfying end, I had to give it a try. And while Doniella used mostly professional products on the show, I used whatever I already had lying around. To really put it to the test, I wore a different look to work for a whole week. Here’s how I did: 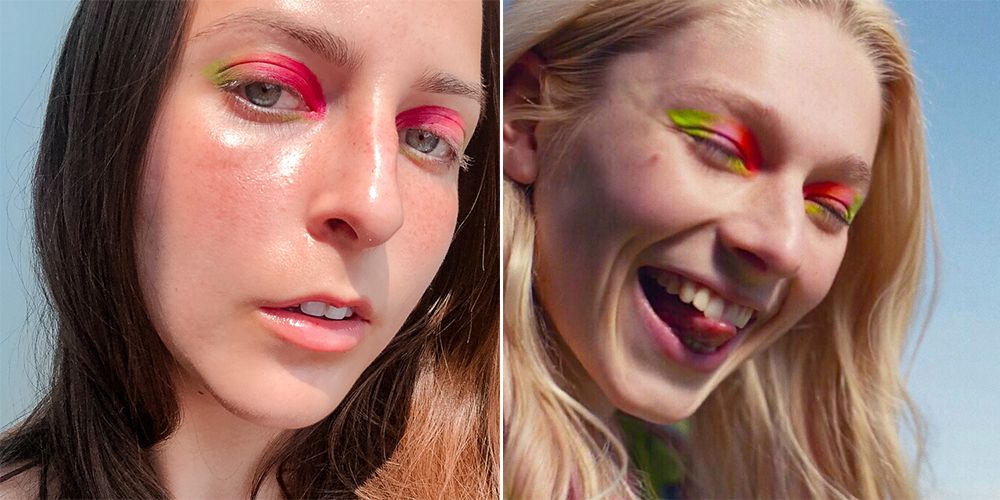 I started with the look that first caught my eye—the neon watermelon-y eye on Jules. I opted to use liners instead of shadow, because I thought I’d have more control. I started by making the inside shape with MAC Chromagraphic Liner in Basic Red, making sure it reached above my crease so the shape would be visible with my eyes open. Then I went in with Diorshow Pro Liner in Matte Green to draw the wing. I connected the two on top, and filled in the rest with Marc Jacobs Highliner in Lollipop (which, sorry, is discontinued). I blended the pink into the red and the green with this pink Lancôme eye Chubby—a creamier, lighter pink—and then went back in with the green and magenta on the inside corner of the bottom lash line. 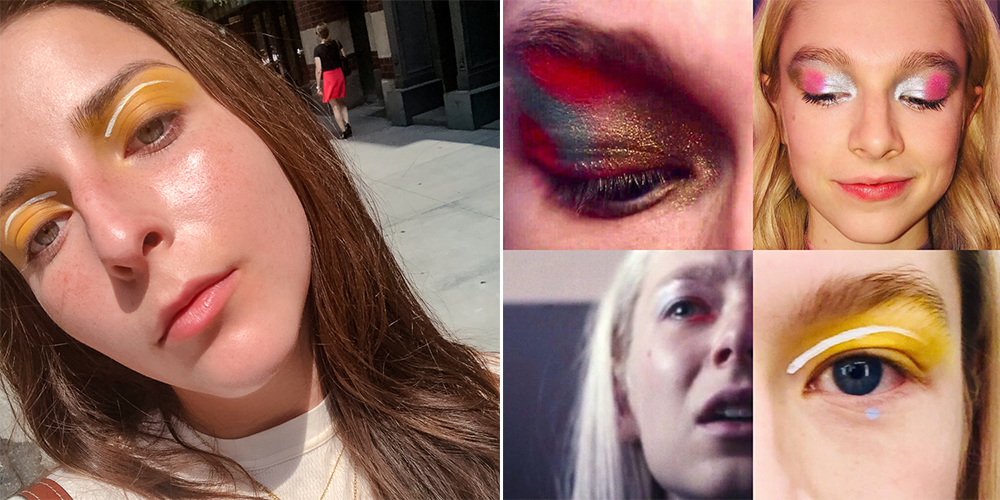 For the second day, I used Glow from the Claropsyche palette applied with my fingers all the way up to my eyebrow. I swiped Wet Tshirt white liquid liner from Fenty on my crease, and then finished with a dot of Glossier Colorslide in Early Girl under my lashes.

Day 3: And Now For Some Clouds 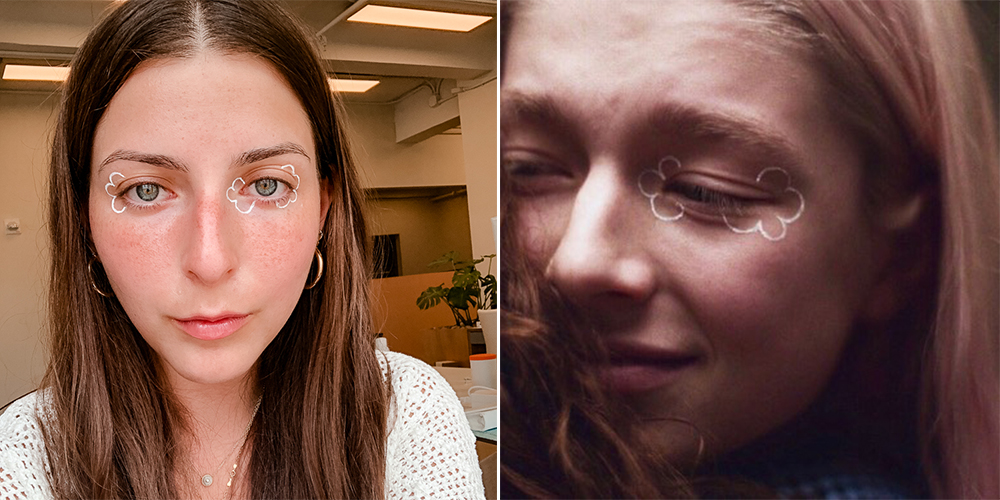 On day three, I used just the Fenty liner. This was probably the hardest look of all to actually accomplish. I had to keep wiping off the clouds with a Q-tip and redoing them, because they weren’t puffy or clean enough. And, since I had to get to work, I was on a time crunch. “Often we are under the gun of time when getting our actors ready, and don’t really have time to start over,” said Doniella. “Even with all the planning we did, sometimes shit would go sideways and we’d have to come up with a creative fix on the spot. To be honest, a mixture of intentional design and creative improvising makes for the most successful looks.” After a few tries, I got it right, and I loved it. 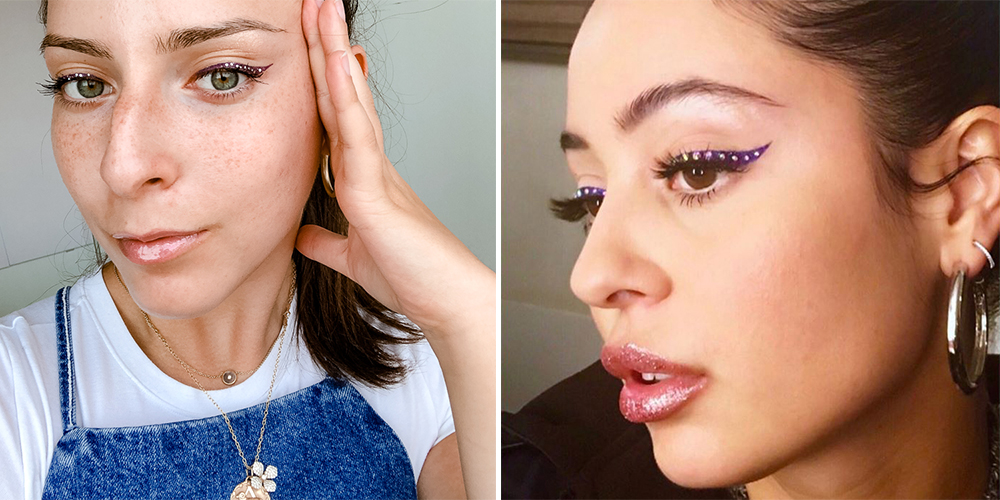 After three days of Jules looks, I wanted to try something of Maddy’s. I started this look with a Dior felt-tipped liner in Matte Purple because I find it easiest, but Doniella revealed she finds them too slippery. “My preferred method for winged eyeliner is a flat, angled eyeliner brush, a pot of cream eyeliner and a lot of practice and patience. I also love to use scotch tape to help me achieve a straight and crisp line.” I couldn’t find any rhinestones small enough to make this look work, so instead I took a pot of Glossier Play Glitter Gelee in Bijoux Bijoux, smeared some on my hand, and fished out the biggest sequins. Then, using The Detailer, I lined them up along the wing. I think it looked pretty close! I finished the look with a bunch of coats of Lancôme’s Monsieur Big mascara and a swipe of Holographic lip gloss. 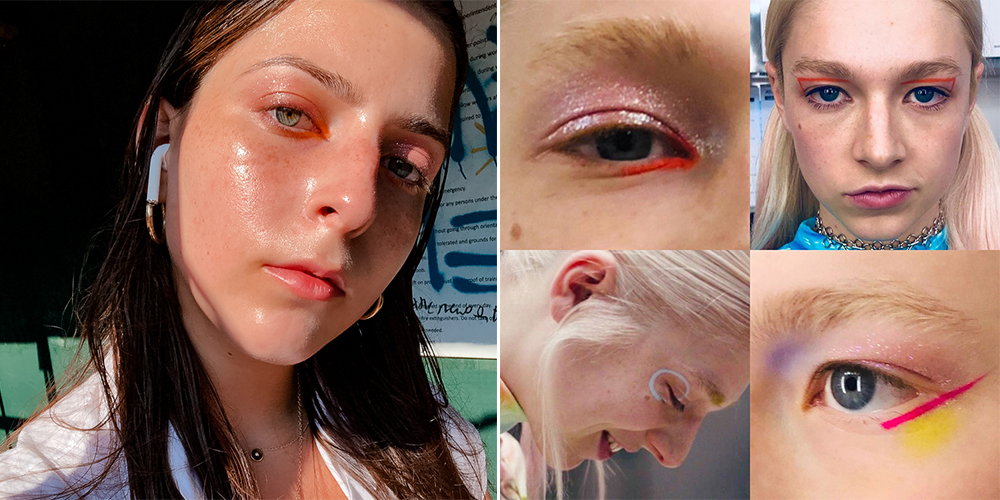 Back to Jules! The pink is Baby Jane from the Claropsyche palette again, applied with my fingers, all over my lid. To make it glittery, I used Stila Glitter & Glow in Diamond Dust on top and diffused it as much as I could. Then, I went in with Dior Pro Liner in Matte Orange [Ed note: launching this month] to line the corners of my eyes. In the show Jules wears this look in a particularly tense moment, and although Tom told me my eyes “looked sad” this day, I thought it was quite nice. 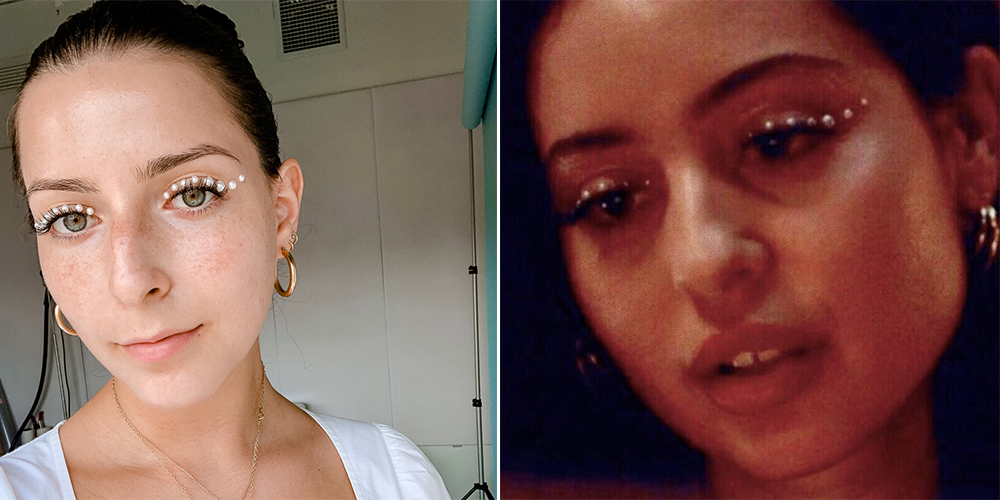 For my last look, I went big with these stick on pearls I found on Amazon. I also got eyelash extensions—unrelated to this story! But I have to admit, they add to the look. The pearls were already sticky and probably meant for scrapbooking, so I just placed them right on, using a tweezer for precision. I used three sizes—the biggest went smack at the edge of my eye, and I put the medium ones on either side of it. For the rest, I used the smallest pearls. I want to wear this look at my birthday party.

At the end of the week, here’s what I learned: I had something right in high school. No one’s watching—well, at least not in New York. I received no strange looks, no double takes, no questions about my makeup (except from one pharmacist who asked about the pearls while handing me my birth control). I genuinely had fun putting it on, and felt like myself—comfortable, confident. I’d wear all of these looks again. Surprisingly, most days I forgot I was wearing anything at all. So often, makeup in 2019 feels like you have to choose between enhanced natural or hyper sexed-up Instagram makeup—we forget the joy inherent to color, texture, and play. Doniella echoes this, saying, “I was encouraged to push through existing makeup norms, and introduce a new makeup language; a way of transcending mainstream archetypes and stereotypes and embracing a more fluid, boundary-pushing mode of self-expression.” It was nice to be reminded of that. Oh, and if you’re reading this high school Ali? It’s all going to be OK.

Photos via the author and HBO.