“I grew up in Pittsburgh, and I got my own place here 10 years ago. You know, we have all these preconceived notions of the town we grew up in—I felt like it was my duty to leave, so I went to Ohio University and moved right to New York after I graduated to work in fashion. Then eventually, as an adult, you come to look at your hometown in an entirely different way. It becomes your own, not your parents’. That’s what’s been happening with me.

I have a show on HGTV with my brother called Home Again With The Fords. It’ll be on Discovery Plus on the 17th. I had always fixed up my rentals, but I hadn’t thought about a career in design until I bought my house in Pittsburgh. I was finally able to rip out walls and make it my own, and I wrote about the process on a blog. Honestly, I didn’t think anybody would read it except my mom. But a friend I knew from fashion who worked at Hearst saw it, and she shared my information with Country Living. After they shot my house, people started calling and asking if I could do freelance interior design work. I wanted to say yes because I needed the work, but I had no knowledge of the business behind designing. I called a friend of mine named Dan Mazzarini, who is an interior designer, and he gave me a rundown. Then I gradually started going into people's houses and moving the furniture around, changing the paint colors. I got my brother to help me make new cabinets, and take off the uppers to replace with open shelving. Around that time, a friend of a friend who worked at HGTV was looking for talent for a show about people buying their childhood homes. It felt prophetic for us. I never particularly wanted to be on television, but at the end of the day I want to be known for what I’m doing in my industry, and it was a great opportunity. 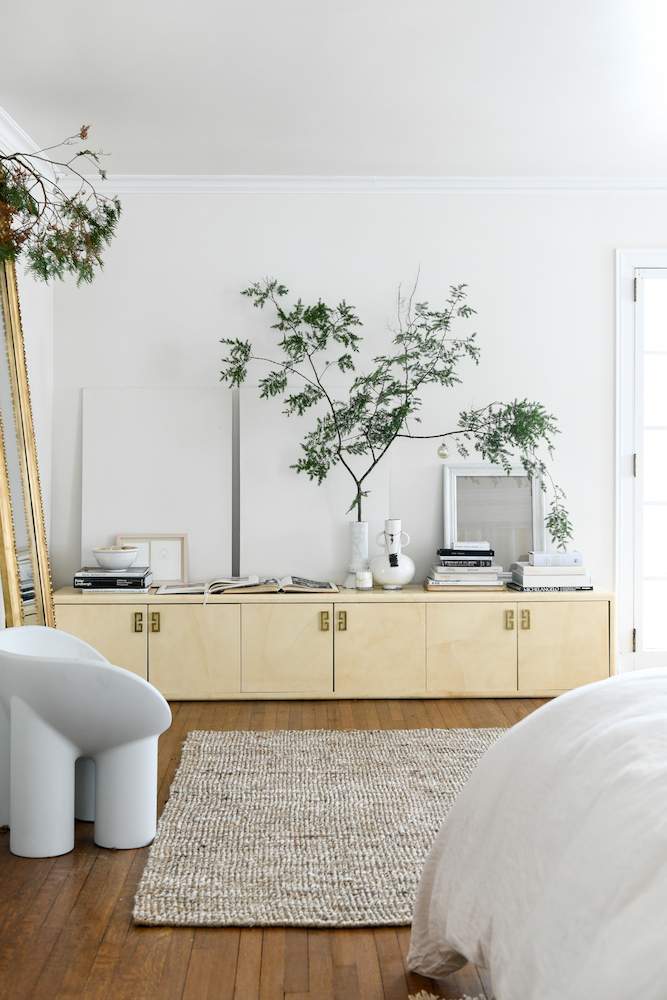 CAREER
It was probably five years between that first phone call and actually getting on television, if not more. But that gave me time to hone my craft, practice up, and figure out my identity as a designer. I love white paint and neutral color stories—I love the colors of leaves and trees, and I like to design in colors of dogs. I love to work with paint and tools. This is an industry where there are actual tools of the trade. This past year we did seven projects for the show within a six month period, and then a few projects outside the show. It's pretty much the same process, except on TV what would normally take us six months we do in two. That takes a village. We have a bigger team, and we also have an incredible network of local artists, art directors, and photographers.

When you're doing your own home, you have the luxury to wait for the perfect furniture. I kind of have to work backwards for the show. Pinterest is good because if I make something up in my head—like, say I want to put tile backwards on the ceiling—I can go on Pinterest and inevitably someone has done a version of that. I also like to use 1stdibs as an education resource—I'll go on there and describe something I saw and loved, and see what else comes up. I teach myself a ton that way, and then I’m able to search better. There’s an incredible vintage furniture scene here in Pittsburgh, and I have them all on speed dial. But if I can't find, say, the Chesterfield leather sofa I want, I can work those elements in other ways—keeping to a neutral color story makes mixing and matching really easy. It’s about context, and playing with proportions and textures.

ON BEAUTY
When I look in the mirror, I try to remind myself that I like imperfect things. I like old cars. I like old houses. I’m going to like being old. I still feel the same as I did when I was 20, but when I went into my 30s people respected me more in my career, and as I’m going into my 40s, now people think I know what I’m talking about whether or not I do. [Laughs] I like to look like how I design, which is undone but interesting, and warm but cool. Beyond that, it's not really about what I look like. It's about my vision. The people who I love and am inspired by, it’s because they’re proud of how they look and what they’re doing.

When I look in the mirror, I try to remind myself that I like imperfect things.

SKINCARE
For better or worse, I am very into the aesthetics of products. That helps me decide what comes into my house. I tend to keep to a very neutral color story, because even when my brain feels crazy and chaotic, it calms me. And there are beautiful things in beautiful packaging now—thank goodness. I like the Royal Fern cleanser and the Aesop Gentle Facial Cleansing Milk. I like the eye cream from Berlin Skin and I also like the Goop eye cream. The Pittsburgh winter is so dry, so I use either Vintner’s Daughter or the Goop facial oil before my moisturizer, which is a little facial balm called Somerset Moss I got in Venice Beach. My other go-to is just coconut oil. I put it on my face and neck. And also I like all the sprays—I’d take them on airplanes, when I went on airplanes. The Nutrient Mist from True Botanicals is really nice.

MAKEUP
I rarely ever do my makeup not sitting on the floor or in the car. I actually keep a lot of my makeup in the car because I like to have it handy. I like a little ‘60s makeup—the Twiggy thing, just cheeks and eyes. I never wear lipstick, ever, to my mom's chagrin. Everything is eyes and cheeks. I like the Bobbi Brown mascara for daytime. It’s a throwback, but I was surprised I liked it so much. For nighttime, I load it on—tons of black mascara. I use both the YSL, which is my favorite, and Givenchy Noir Couture on top of each other. And I do put mascara on my bottom lashes. I love cream blush, because I think it looks the most natural. Gucci Westman’s blush stick in Dou Dou is great for the daytime and I use Poppet for evening, because I like to look a little sunburnt. I put it on the apples of my cheeks and a little bit on the sides of my cheekbones. 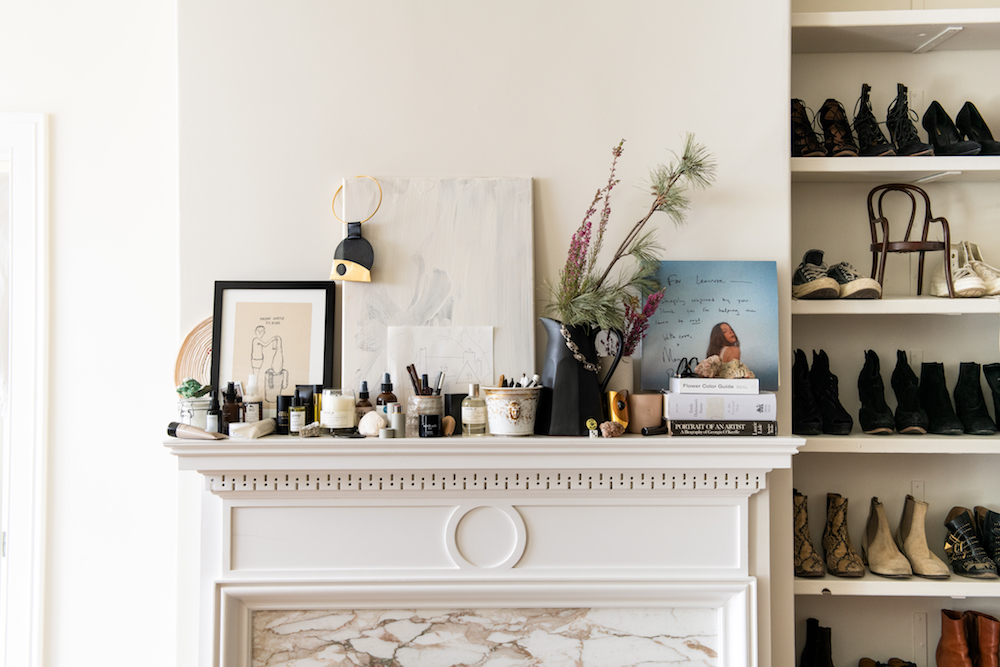 It’s so funny how, with makeup, we take red out of some places and put it in other places. I’ve been using the Cle de Peau concealer with the brush tip on my chin where I’m a little red, and under my eyes. I used to use the other one, but I like this one better. I get my brows shaped at Striiike when I’m in LA, and they also tint them, which I love because it kind of takes one step away. I want them to be as full and fluffy as possible so I’ve been using Grandebrow, but I can’t really tell if that’s working. In the meantime I fill them in with the Hourglass Arch Brow Pencil in Dark Brunette and use one of two brow gels, Dark Brunette or just clear. I use Chapstick on my lips, but I take off the blue label so it’s just a white tube. I like the one from Henné a lot too, and when I finish it I want to try taking out the Chapstick and sticking it into that other packaging. They’re the same size, so in theory it should work.

HAIR
Ashley Streicher just cut my hair. I wanted a little ‘20s French bob, and just told her to do her thing. It's pretty cute! I like to blow it under, because I like the little flip thing happening. Before this it was probably to my shoulder, but I've had bangs since I was a kid. I trim them myself all the time—I’ll just lean over the sink and chop, chop, chop. I like them better when they look messy anyway. Every once in a while I’ll go to Ashley and do something fun, but my go-to hairstylist in Pittsburgh is Meg Frattare, who’s actually my best friend from high school. She’ll do my cut and color. And Glam to Go is good for when I just need it styled. I try to wash my hair every few days, but if I’m working and I get a lot of demo dust in it I might wash it more often. I use Le Labo shampoo and conditioner, which I used to steal from the Bowery Hotel every time I would stay there. And then I use this product Ashley gave me, R+Co Sun Catcher. It says it’s a leave-in conditioner, but it just gives my hair a little heaviness so it’s not too fluffy. I put it at the bottoms and in my bangs a little bit.

I tend to keep to a very neutral color story, because even when my brain feels crazy and chaotic, it calms me.

BODY + FRAGRANCE
I either have black nail polish or nothing, and I usually get manicures from a woman named Ida in Pittsburgh. I take at least one, but maybe two, baths a day. I’m in there for at least an hour—I don’t really use any special bath products, but I love to wash my hair, read, write, and just sweat out the day. I either use the Le Labo soap or the really big Duke Cannon soap bars. For perfume, I do two sprays of Santal 33 and one spray of Molecule 01. It's my little concoction, which I am happy to share because the more people who smell like that, the better. It makes me sad that when you wear perfume for a long time you can't smell it on yourself anymore. I found Santal in Venice, where literally everybody wore it. By the fifth time I asked somebody what they were wearing and they said it was that, I just bought it. It’s not unique at all, but it’s just so delicious. For candles, I like a campfire kind of thing. I made a candle for my line with Crate and Barrel and it smells very smoky. I also like this one, Bohéme Havana, that I bought at a local store. It smells like smoky coconuts.”