The Perfect Costume For A Halloween Spent At Home

Look, I may as well just say it: if you're the type of person who loves a Halloween party, or if you're a small child with unrestricted access to the internet, Halloween 2020 is probably going to bum you out. But if you're anything like me, next Saturday is uniquely poised to be one of the best ever. Why, you might ask? Everyone knows the spookiest part of Halloween is the fear of missing out—relieve the night of its social pressures, and what you've got left is a bag of 100 Grand bars and a really good excuse to try out that avant-garde makeup look you have in your Instagram saved folder. Plus, since you'll be staying home, you don't have to worry about crucial weather, comfort, and cost logistics. You might as well just wear your underwear!

At least, that's what I'll be doing this year—although I'll be telling people I'm dressed as a model from the Savage X Fenty fashion show. For its second anniversary, Rihanna dressed an ensemble cast of models, musicians, dancers, and actors in her lingerie designs, then tapped Fenty Global Makeup Artists Hector Espinal and Priscilla Ono to create four completely different makeup looks. My favorite was the garden scene, for which Ono outfitted over 30 dancers and models in custom-made flower petal eyelashes slightly reminiscent of Pat McGrath's feather lashes for Valentino's Spring 2019 runway. "Priscilla showed me the ropes when she was creating Rihanna's lashes," says makeup artist Lauren Child, who assisted Ono for the show and was in charge of making most of the lash sets. Luckily for my weekend plans, she was able to teach me the technique—and it won't cost more than 30 bucks to do at home. 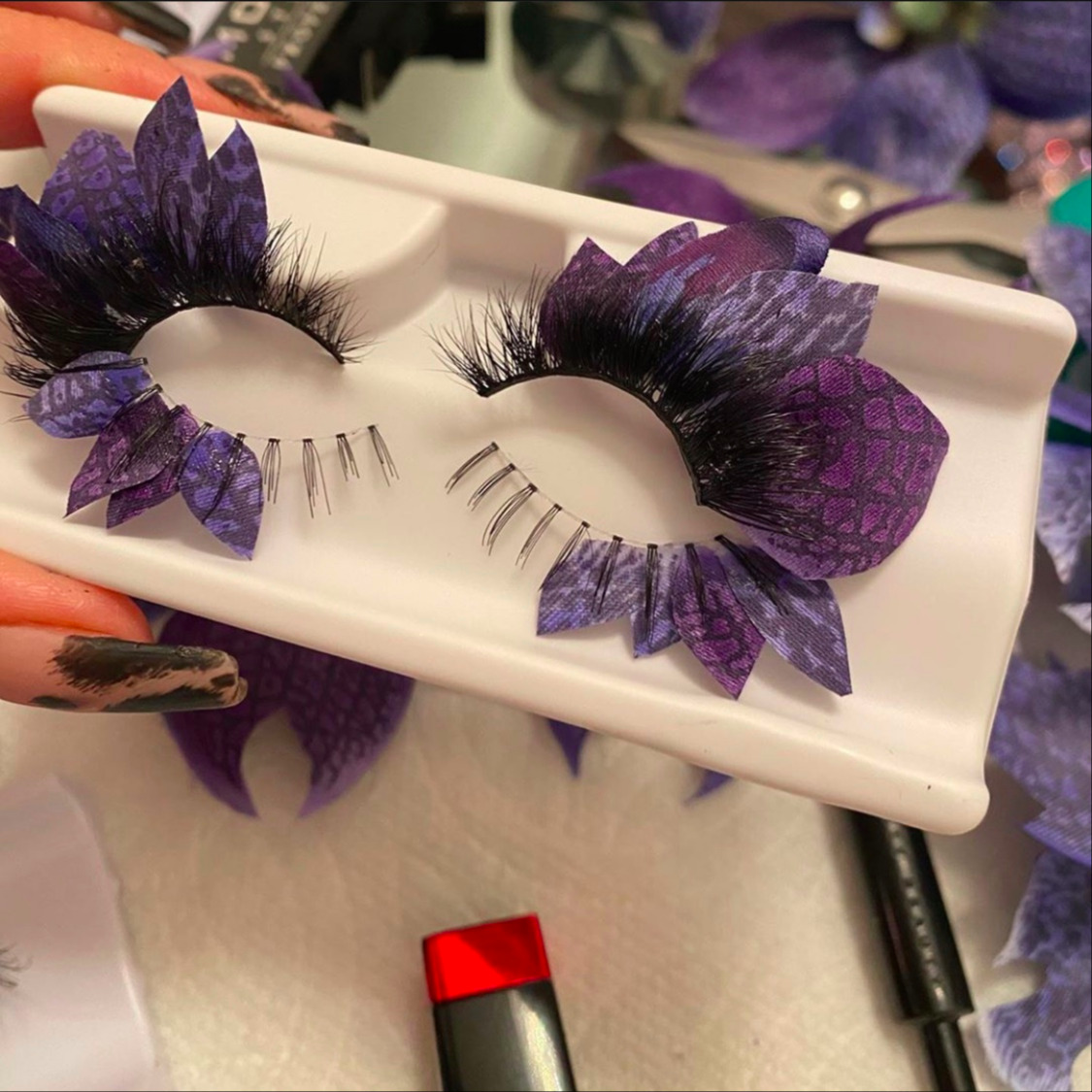 First, gather your supplies: a top and bottom set of lashes, lash glue, a small pair of scissors, and fake flowers. That’s it! Child explained over email that the ideal lash set is wispy enough to let the petals shine, but sturdy enough to hold their weight securely. “My favorite lashes to use were the Ardell Natural 104 for the bottom lashes, and Wispies Clusters 603 for the top,” she told me, which should both be available at your local drugstore. In terms of glue, Child’s favorite is the classic Clear brush-on Duo adhesive. And you can buy fake flowers by the stem at a craft store like Michaels. It’s best to pick a style with large-ish petals (you’ll end up cutting into them, but more on that later) that are brightly colored with either texture, a shade gradient, or both—don’t worry too much about getting flowers that look hyper realistic.

To assemble the lashes, Child cut the petals off of their plastic stems and then cut several tinier petals out of each. She figured out through experimentation that three or four petals for the top and three or four smaller petals for the bottom looked the most flattering on the eye—she also cut them in a slight size gradient, and placed the largest cuts on the outside corners. Top petals reached almost all the way across the lash line, while bottom petals stop around where your iris is.

“The trickiest part was getting the petals to stick to the lashes,” Child said. She placed a dot of glue at the base of each petal, waiting until it got tacky to attach the petal to the lash strip. After sticking the petal where she wanted, Child then applied light pressure to the junction with the end of a disposable mascara wand (a Q-tip would work just as well) for up to 20 seconds. "A lot of patience is required," she added, "but it was so worth it." Once all of the lashes were stuck on, Child clipped stray threads and drew a fine line of Fenty’s Flyliner in Cuz I’m Black to hide excess glue and add cohesion to the two components.

Once you've made your own petal lashes, gently glue them to your real ones and finish the look with a flushed cheek, a glossy pink lip, and enough highlighter to look otherworldly under the glow of your TV. All you'll have left to do is figure out which underwear best fits the mood—no worrying about being cold on a trash-littered street corner, no cover charge, no concern for the inevitability that your meticulously constructed costume will come undone midway through the night. "Happy Halloween," you'll say to no one at all as you stretch your nearly nakey-nakey-nakey body across the couch and pop a fourth KitKat mini out of its wrapper. Happy Halloween indeed.