“My father was in the navy, so I was born in Andrews Air Force Base and by the age of one I had moved to Italy. I lived there for five years. Then I moved to Morocco for five years, and then to Puerto Rico. I moved to Virginia Beach when I was 14, and that’s where I found my passion for makeup. I would watch my mom doing her makeup in the mornings and one day I asked if I could help. It gave her this whole new energy that made me in awe of what makeup could do. After a while she started waking me up in the morning specifically to do her makeup. I was like, ‘OK, but don’t tell anyone at school.’

EDUCATION + CAREER
I learned I had dyslexia in the first or second grade—it’s something you never really get over, but learn to live with. It makes you a little shy and very aware that you can mess up speaking at any moment. I had to learn special techniques to talk, to put together sentences that are cohesive. I never wanted to read in public, I never wanted to be the center of attention, but I did want to do well. I learned to excel in art and biology and basically anything that didn't have to do with numbers and reading. Having dyslexia enhanced my ability to be creative and to follow that path.

I went to community college for two years in Virginia Beach. Then I started working random jobs. I worked in surf shops for four or five years—loved it. And then in my older 20s I moved to D.C. The setup reminded me of Europe. It was very diverse, it had culture, it just spoke to me. But I didn’t know what I wanted to do there. I got a job at EFX, which is now Bluemercury. They sold all kinds of beauty products, but I was so attracted to the makeup counter that I couldn’t get away from it. My coworkers would say to me, ‘Carl, we sell other things…’ After a certain point, people would come in before weddings, first dates, just anything, and ask for me. And so they made a new position for me in the store where I could charge people for makeup services. 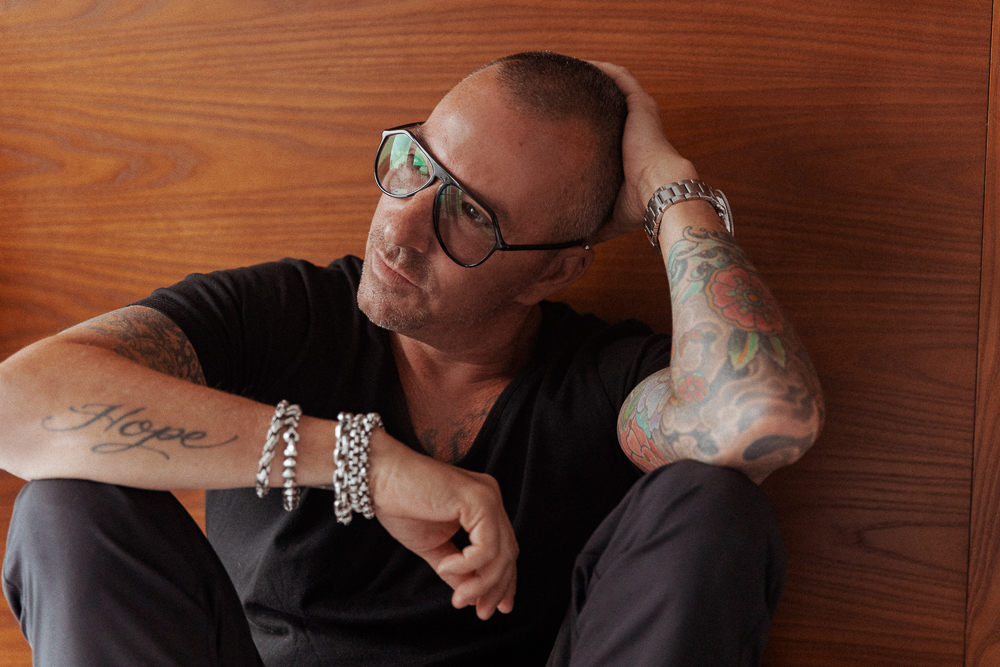 One day a woman came in asking if I could do her makeup for her wedding. I didn’t ask her what she did [for a living] or anything, I just did her makeup. And then the new issue of Washingtonian came out, and it turned out that she was the editor-in-chief. She wrote a story about her wedding, and in it, she had mentioned me. For me it was the coolest thing ever and a confidence boost. Right after I went to the Four Seasons in Georgetown and asked if I could talk to someone about being a resident makeup artist. They got the salon owner to come over and meet me for tea. I showed her the article and she hired me on the spot—I was there for 15 years. I had the opportunity to work with a lot of dynamic people coming in and out of those doors. Everyone from actors, to politicians, royal ambassadors, writers, rockstars. You name them and they probably stayed there, and a lot of them wanted makeup.

After a while [my mom] started waking me up in the morning specifically to do her makeup. I was like, ‘OK, but don’t tell anyone at school.’

MICHELLE OBAMA
I was working at the Four Seasons when I got the email from the White House. I thought it was fake! [The Obamas] had been living in D.C. for three or four months at that point, and someone was asking if I’d like to come in and do Michelle Obama’s makeup. When I went in to meet her, the first thing I said was that I was nervous as crap. She giggled and asked me if I wanted some water. I said sure and did her makeup. I didn’t ask her what she was doing, where she was going, nothing, although later I learned it was for a surprise birthday party with friends and family. I got called in three days later to do her makeup again. And from there it just started building. I hadn’t done anything for her where she’d be in public, like for photographs or TV, until I got the call about accompanying her on her first solo trip to Haiti and Mexico City. By now, I think I’ve gone to 32 countries with her. Going to Buckingham Palace was a special moment for me. Cuba as well. And I’ve done all her magazine covers, all the state dinners, the inaugurations, the parties. Pretty much any time you see her, I’ve done her makeup.

I really manifested working [with Michelle Obama]. I remember seeing her on Oprah, wearing the black and white J. Crew dress, and thinking that she’d be the best person to work with in D.C. When we finally met and I was doing her makeup for the first time, all I could think was, ‘Please don’t let her eyelash fall off, please don’t let her eyelash fall off…’ The stakes were high! I wanted her look to be approachable and professional. I didn’t want her to be over-the-top. I didn’t want the stories to be about makeup, makeup, makeup. I wanted her to feel good, look good, and to be able to be the best representation of herself. For state dinners and inauguration balls I would kick it up some, but generally I kept it just really pretty.

When I went in to meet [Michelle Obama], the first thing I said was that I was nervous as crap. She giggled and asked me if I wanted some water.

MAKEUP
I also do a lot of bridal makeup. On clients I like to use Make Up For Ever HD foundation a lot. I like Face Atelier as well. That’s sort of a cult brand you can’t buy in department stores or anything, but it’s got a huge following and you can buy it online. I just really like the coverage—it’s buildable, you don’t need a lot of powder, it’s pretty. For eyeshadows, I like Viseart—I always keep their eyeshadow palette in my kit. I really like nude lips. Make Up For Ever has a great liquid nude lip now, and Marc Jacobs has some really nice nude lips, too. Same goes for Tom Ford. Sometimes I’ll use a lip pencil all over and just a little gloss in the middle for a nude lip that’s really going to stay in place. I do all types of things. I’ll even put concealer on the lip and just sort of blank it out, and then from there build on what I want. 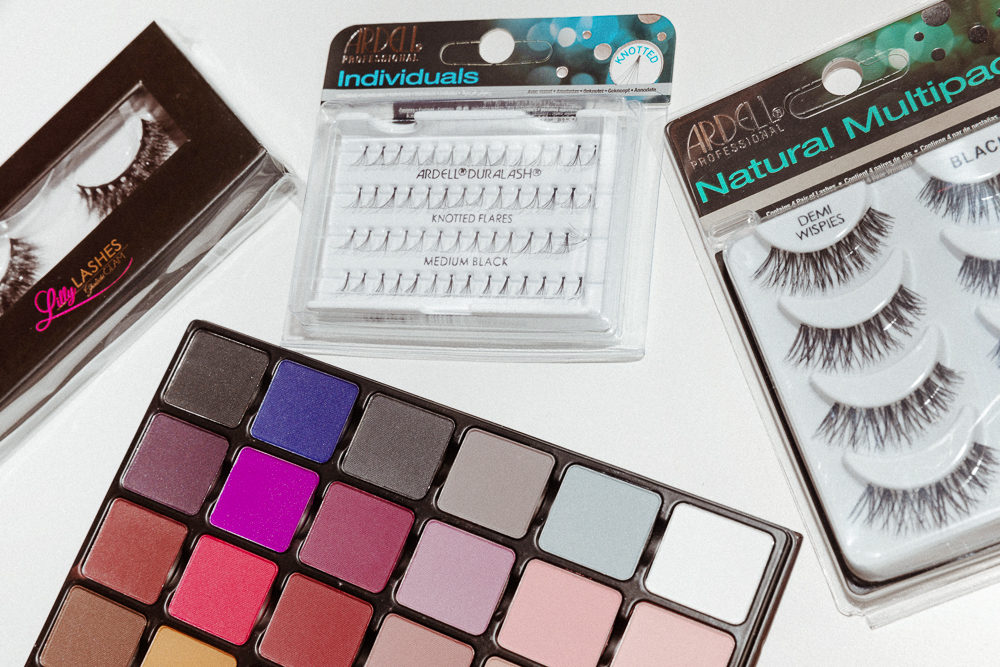 SKINCARE
I love The A Method from Tina Alster, who’s a dermatologist where I live. She has a 20-percent Vitamin C antioxidant gel that I try to use every day in the morning. That really helps my skin—it makes it feel and look wonderful. I cleanse with the Ultra Facial Cleanser from Kiehl’s—that’s my go-to. Sometimes I’ll use Cetaphil in between, if I want something really light. For moisture, I wear Kiehl’s as well—the Ultra Facial with SPF, and I don’t have a separate night cream. I have super sensitive skin, so I’ve got to keep it sort of simple. I do like the new Glossier Bubblewrap. It’s so lightweight and it doesn’t have a lot of ingredients. And I’m super, super sensitive and I like the texture, the slip of that.

BODY + NAILS
For body wash I like Molton Brown—I like the eucalyptus in the morning to kind of wake me up. For lotion I use Cerave—that works really well for my sensitive skin. I use the one for eczema. I don’t actually have eczema, I just like the slip, the feel, the smell. 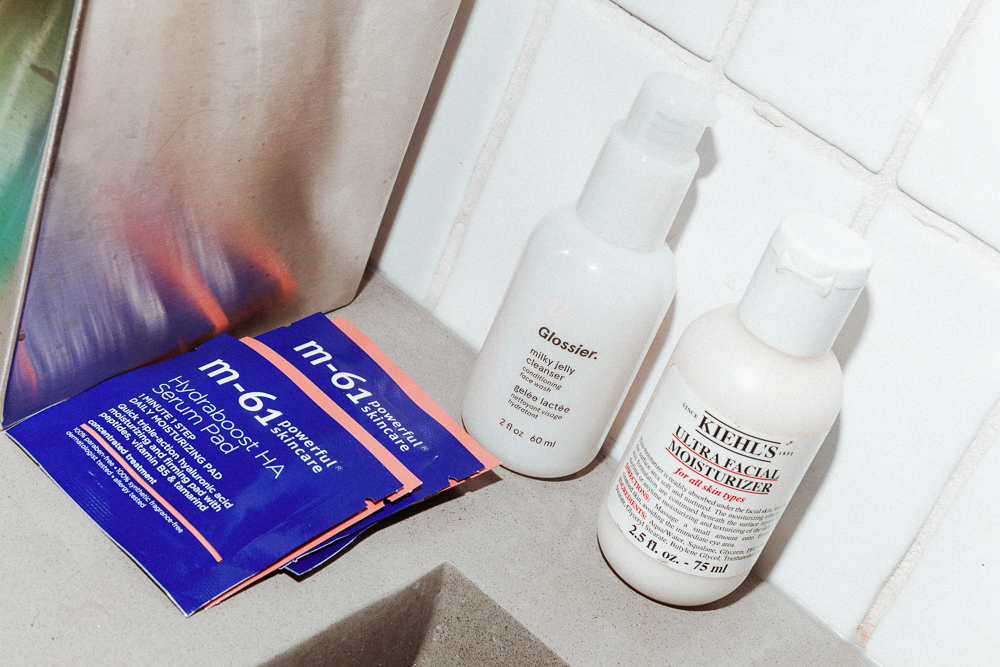 I regularly get pedicures and manicures. I go to a salon called Mimosa, where you’re served a mimosa during your appointment. I also get a massage once a week from a woman named Wazza. She comes to my house and gives me a Thai massage. I didn’t know I needed that in my life until someone recommended her to me. After my first massage she told me to drink a gallon of water and take two Aspirin, because she had really worked me over. She goes, ‘You’re going to be sore tomorrow.’ I woke up the next morning like ahhhh—she really fixed some issues I had going on.

I didn’t know I needed that in my life until someone recommended her to me.

TATTOOS + HAIR
A lot of these tattoos mean something to me. Some of them I got when I was young, but now I go to Tattoo Paradise and see Dave [Cavalcante]. They’re all like a map of what I’ve done. ‘Hope’ was at the end of the administration. Water, because I love water and surfing—that’s my happy place. I got the compass because I do a lot of traveling, the word ‘real’ because I always want to keep everything very real, and roses for when I went to London and Buckingham Palace. And I have passion on my chest—huge passion.

I go to barbershops all around the world, it’s my thing. [My hair is] so short, it’s like, I dare you to mess it up. I’ll Google ‘nice barber near me,' or I’ll ask the concierge at wherever I’m staying. My favorite barbershop experience was in London. I went in and sat down, and the barber flung me back to shave my hair. When he was done shaving, he got a piece of cotton and burned it right next to my ears, to burn off my ear hair. I mean, I don’t feel like I have ear hair, but he did that. And it was just the coolest experience.”