“I’m from Nashville. I started doing community theater when I was about eight, and then I got into commercials. Acting was always something I really loved to do, but I never bet on it being my career. Even after getting into film in my teens, and doing some indie films, it took me a long time to be able to call myself an actor. Acting always felt really unpredictable and, financially, I figured I’d have a job-job and do it on the side.

CAREER
I was midway through college at NYU when Stranger Things happened. It was just like any other audition—I knew Winona Ryder was in it and that it was for Netflix, which at the time obviously wasn’t what it is now. I remember I had an emotional day, and I thought I really messed up the audition. Then I got a callback, and I didn’t feel great about that either—it was only when I got to the screen test that I figured I must have been doing something right. Ultimately, I put a pause on my education to go film it. We all felt good about the first season, but there was no way to predict this kind of thing. I remember I was out with friends in New York when it came out. One of my friends was a little inebriated and I was helping them get home, and someone stopped me to ask if I was Nancy from Stranger Things. I remember it so much because it was the first time I was ever stopped on the street. I am kind of private and introverted—I don’t mind stopping with people and having conversations, but it’s still weird to hear someone yelling ‘Stranger Things’ at me from across the street. 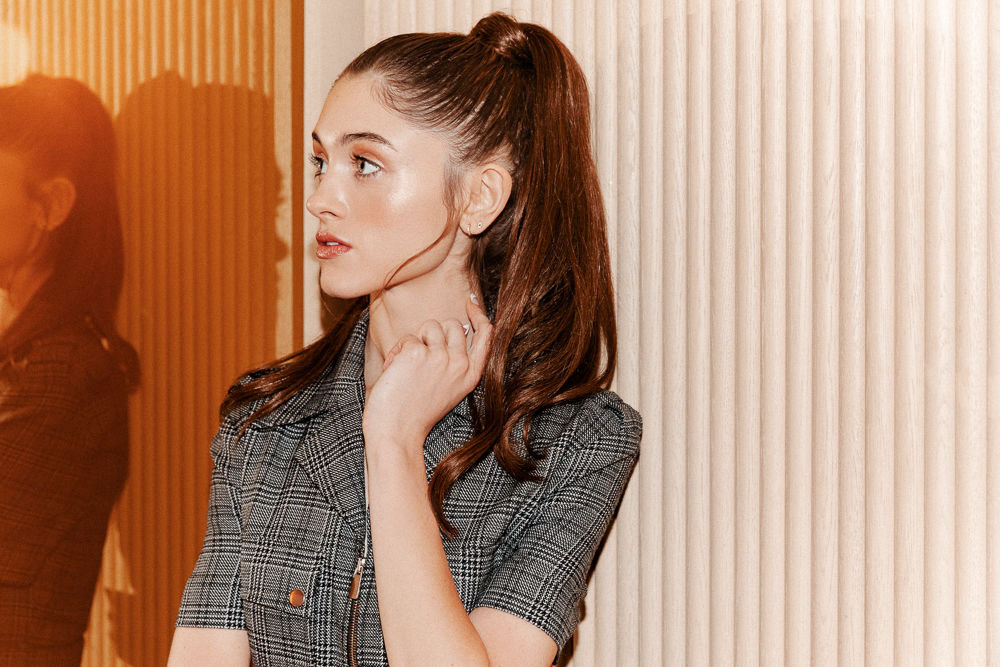 I still feel very green. You’re supposed to inhabit Hollywood confidently, and adjust to this world quickly. Learning how to do that, while still remaining true to yourself, has been tricky. I want to be very decisive about my next thing. I’m waiting for something that’s really challenging and different—something that pushes me and makes me grow in a different way. Until I read a script that gives me that feeling, I want to be picky. Sometimes I think about going back to school, but for now I’m getting a different education. I’ve been traveling a lot—my favorite place so far has been Japan. Going somewhere where you’re so out of your element, and no one speaks your language, your brain is kind of forced to figure things out. I think that’s how I’ve made the most vivid memories.

SKINCARE
Because I’m in so much makeup for the show, in my day-to-day life I don’t wear much. There are lots of touch-ups during the day, especially in the summer—they’re constantly powdering you, and then spraying you with ‘sweat.’ And some people, like the ones who have a lot of special effects makeup and prosthetics, have it way worse than I do. I will break out during filming, and in those cases I find that less is more. When I wake up, I’ll usually just use a toner or micellar water to cleanse—Fresh does this Deep Hydration Rose Toner that smells so good. On days I have makeup on, I take it off at night with the Eve Lom Cleansing Balm. Then I follow with either the Cashmere Cleansing Milk from Omorovicza or Glossier's Milky Jelly. Then, I’ll exfoliate a couple times a week with these Dr. Colbert exfoliating discs, but I try not to do too much of that. 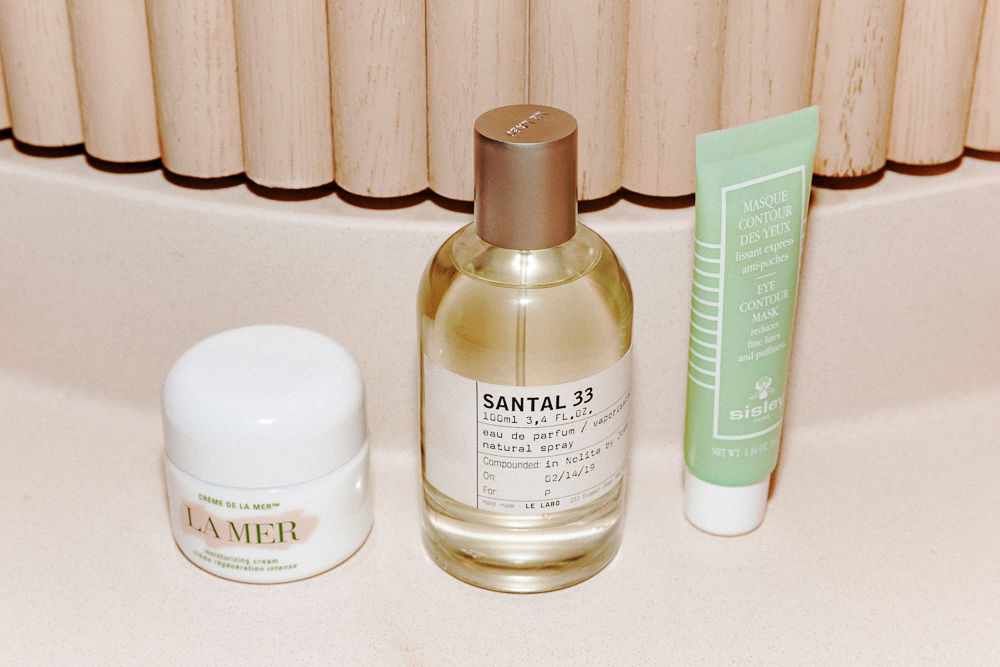 When you’re a teenager, you go through that whole ‘being harsh to your skin’ phase. Once I got into my 20s, my skin became super dry—I think it was just hormones, but who knows. Now I’m much more about moisture. I got a sample of La Mer cream from somebody, and I hoped I wouldn’t like it, but I do. I know people swear by it, and I’ve heard other people say it’s just Nivea… I haven’t tried Nivea, but I like this quite a bit. Even in the summertime, it doesn’t feel too heavy. I also see a dermatologist at New York Dermatology Group, and Shannon at Georgia Louise Atelier for facials. She saved my skin quite recently.

MAKEUP
If I am going to put makeup on, I’ll use a tinted moisturizer with sunscreen for a little coverage. There’s one from Nars that I like, otherwise it’s CC cream by IT Cosmetics. Then I use this Clé de Peau concealer under my eyes. I’ll wake up at 6 or 7AM regardless of when I go to bed, so deep sleep escapes me often. I’m a morning person. Morning light—I love it! But I always end up with dark circles.

I try not to tweeze my eyebrows much myself, but I’ll use Anastasia Brow Wiz and Boy Brow. I love a good, full brow. Usually, that’s it. If I want to do more, I’ve been using Cloud Paint in Dusk on my eyelids and my cheeks. Or I’ll use Charlotte Tilbury Eyes to Mesmerize on my eyes—this one is Marie Antoinette, and I have the other one that’s more gold, too. Other people are usually doing my makeup, so I’m not practiced at it—everything has to be fingerpainting for me. Just smudgy, washy, watercolor-y—that’s what I do on myself. 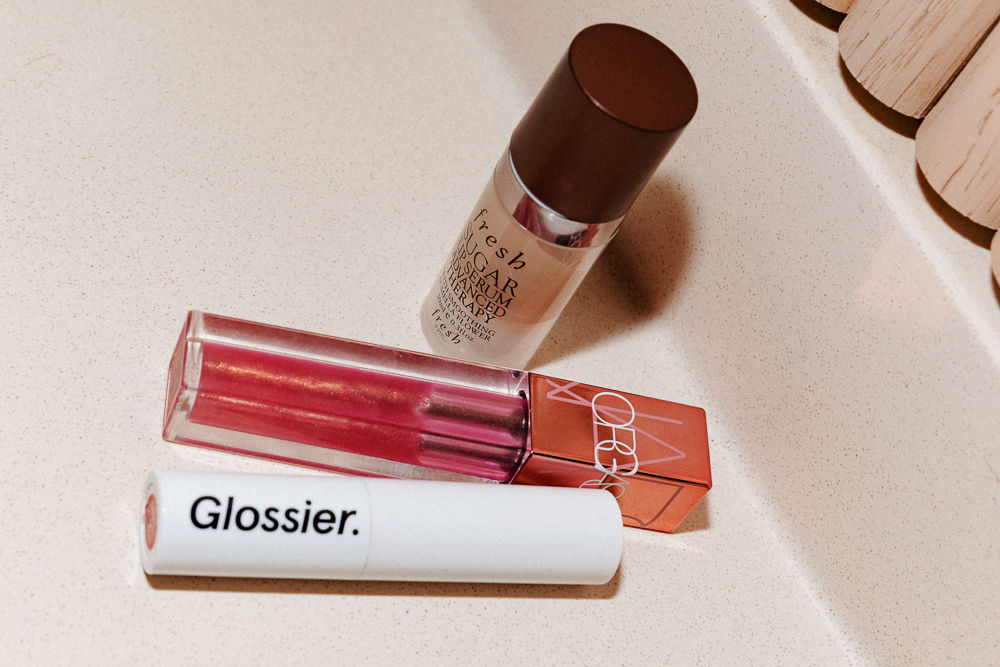 Obviously I can’t do eyeliner. I’ve completely given up on it. But I also find that it makes my eyes look strange, or somehow not like my eyes. I do love mascara, though! I have pretty naturally long lashes—thank you, mom or dad—and I like a chunkier mascara most of the time. A little Twiggy. I’ve been using the Nars Climax and Yves Saint Laurent’s Shock. For lips, I swear by Glossier’s Generation G in Zip. It’s honestly the best lip stuff I’ve ever used—I don’t travel without it. It’s a nice sheer matte and it’s not drying at all. And if I want shine, I like Orgasm Lip Gloss—it’s a nice, oily lip.

HAIR
Nancy went all in with the hair this season. I was tossing ideas around with the head of the hair department, and we decided to do a perm. That was… an experience. But for six months, it’s your job. The main issue was that I had bleached my hair that fall on an indie film—it was one of those kitchen sink situations. Then I colored over it, so when I came back and did the perm, the ends melted. Luckily it turned into kind of a natural ‘80s shag—very time-period appropriate. It was great for the show, but in my real life it was… so many bobby pins. A million bobby pins! I just wanted to be able to put it in a ponytail without bobby pins. I had bangs, too—that was more bobby pins. I really struggled with what to do with it. Honestly though, I’d be open to doing a perm again once it grows out. My hair is fine, so I like a little bit of damage to give it something. If I hadn’t been blonde, it would’ve been better.

My hair is on the mend now. I want to try to grow it out for as long as possible. I’ve gotten it trimmed since the season ended—the most consistent place I go for that is 901 in LA. Marc Mena, my hairstylist, probably knows my hair the best out of everyone. As I’m growing it out, he gave me the Great Lengths extensions. I’m a wash and go type of person, and I didn’t know extensions could be so easy! I’ve been using that Ogx Coconut Milk shampoo and conditioner for years, and it’s not failed me yet. It’s sulfate-free, and it smells really good. Olaplex was a savior when I bleached my hair, and it was a savior after the perm. I used it all season. I don’t know what it does, but it’s a godsend. Then I’ll throw in whatever moisturizing thing is around. I like Oribe a lot—they have this moisturizing shine cream that I really like, and I don’t go anywhere without the Dry Texturizing Spray. The Mason Pearson is another thing like the La Mer—it’s so hyped, and you wonder if it’s really worth it. But it’s a great brush. 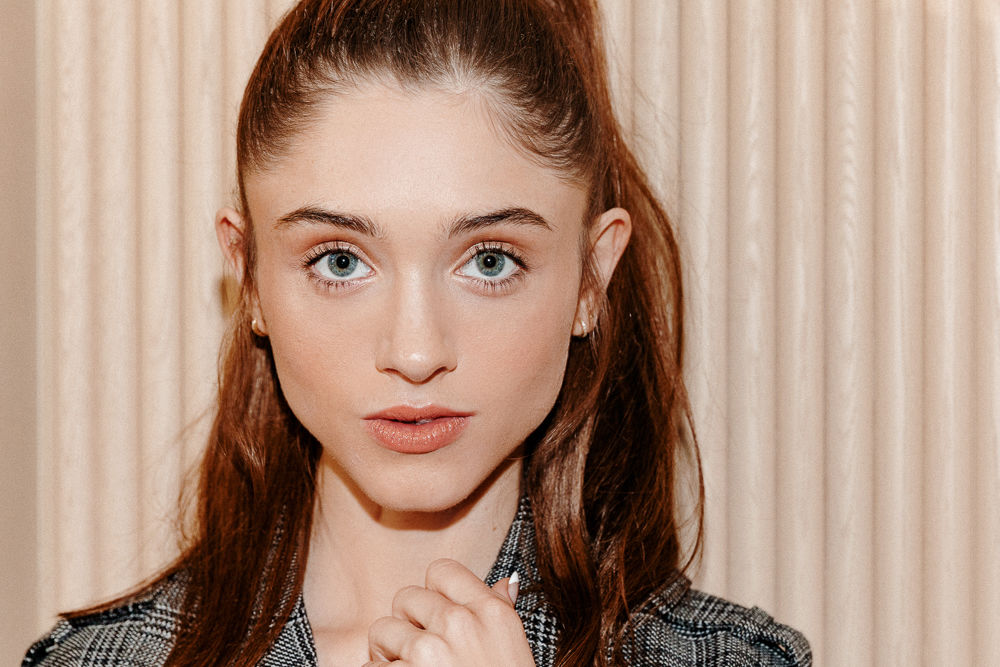 FRAGRANCE + NAILS
For fragrance, I use Santal 33, or I’ve also been using Mojave Ghost by Byredo. I have quite the arsenal of fragrances. Scent goes straight to the pathways of the brain, and scent is so linked to memory. They’re very specific, sentimental things. When I feel like starting a new chapter in my life, I switch scents.

I’m addicted to gel polish, which I know is terrible, but I have no patience to let things dry. I just got these done at a place called Art Nail. They do the most amazing nail art, but I was trying to keep it simple. This is the first time I’ve ever had nails this long. Eating anything, or just texting, is an adjustment. But I like having nails. If I can look down and have something that makes me smile, I like it. In general, with this job, you have to keep it neutral—you can’t have Cardi B nails all the time.”