“I might have been 20 years old for my first interview with Into The Gloss. I was at Columbia learning Urban Studies—it feels like a lifetime ago. At the time I wanted to be a writer, but my mentor said to me, 'Don't study writing. Study something weird so you have something to write about.' So I became attracted to the urban planning program because it integrated so many fields that I was fascinated by: Architecture, art and design, history, politics, engineering.

I had been modeling to help put myself through school and my career started to take off—I'd done this social media campaign with Tiffany and Co. with Joan Smalls, and there was all this momentum. So when I graduated and said I was moving to Miami to be a project director for an urban design firm, people were confused. There's so much temptation to go for the glossy, glamorous thing. I'm so grateful for my experience in my early 20s—I traveled all over the world. But that to me was more like an education I got when I wasn't in school.

It wasn’t until a few years later, when I was working as a brand strategist for a fashion company, that I decided to completely change my career. When you're young it's easy to get disconnected from your body and your needs. You're in survival mode, you're figuring out how to be an adult, who to be in the world. I had grown up in the most majestic, extraordinary beauty in Northern California, among the Redwood trees. Every day [of my childhood] I was hiking in the forest with my friends, or driving to the beach on the weekends. Then for seven years, from age 18 to 25, I was running around to school, to fashion shows, to meetings. I didn't know my body was craving nature. I just thought I was anxious, that I had trouble sleeping, that I easily got depressed. When I moved to Miami and got my hands on plants again, it was like my soul was remembering who I was and where I came from. It was this electric experience where my whole body became alive. It gave me a sense of purpose, and all the disorientedness I was feeling went away. 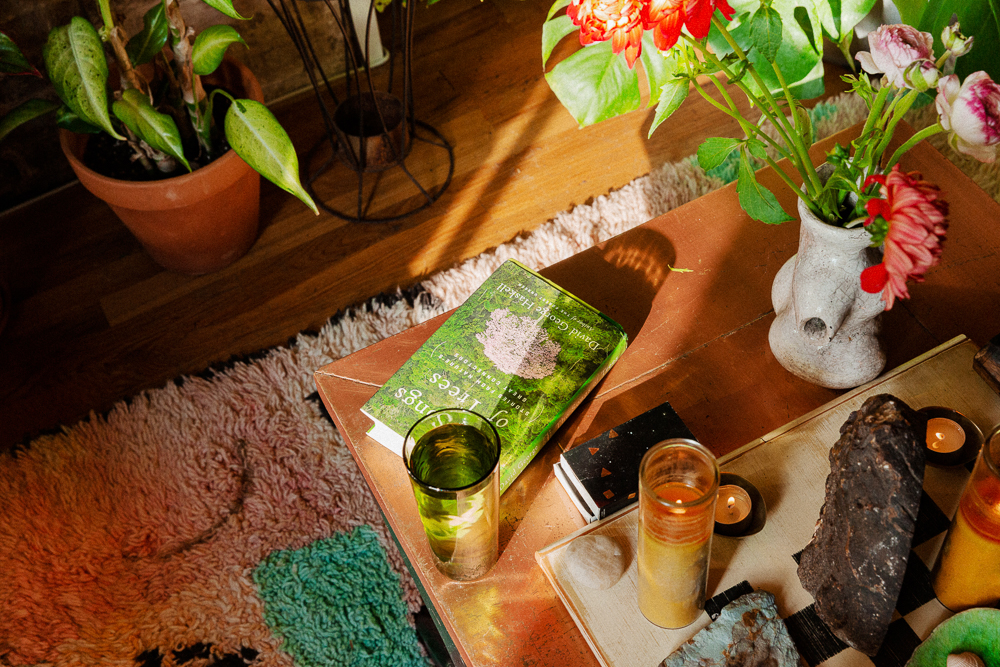 It was terrifying going off on my own. Three years ago I had zero projects. I knew nature was my calling, but I didn't know what to do. I was so committed to perfectionism and not messing up, but I realized that in order to blossom you have to take a risk. I started asking friends if they would let me do their backyards to build my portfolio. Then one night when I was about 27, 28 years old, I was sitting at a dinner next to an artist who was building a crazy 150,000 square foot experiential art exhibition in LA. He said he wanted to do a garden room, but that he didn't know anything about plants. I showed him my portfolio on my phone, and he said that if I could come up with an idea that he liked in a week, that he would give me the space. My idea was this landscape based on moon topography that was made out of sod. He greenlit my idea, and what became of it was at the 14th Factory. We didn't know if anyone would show up, but then over 100,000 people did.

That led to my project at the High Line. I was given a quarter mile stretch of the High Line, from 14th Street to 18th Street, and we brought in 13,000 flowers to create this kind of undulating maze. We partnered with a composer, musicians, a choreographer and dancers, and activated that space for three days. It led to this whole career path that I never foresaw, which is site-specific botanical art pieces. Now my work is half traditional landscapes—we just opened a retreat center called Shou Sugi Ban House that's three acres of Japanese-inspired gardens—and half botanical art pieces like what we did with Visionaire, for example. 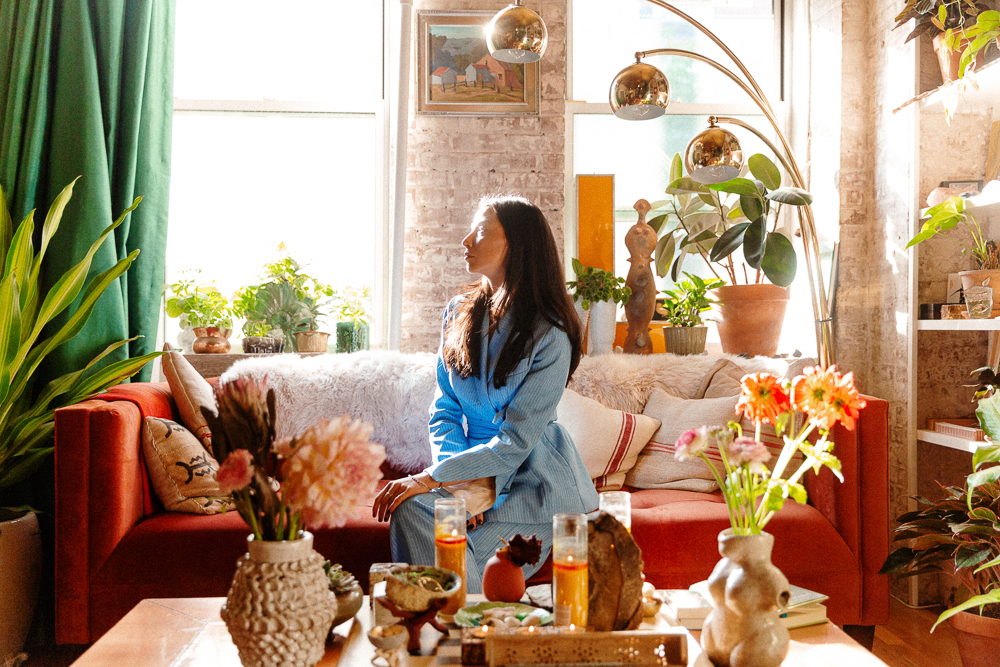 Maybe it’s a result of starting my own business, but when I turned 30 I started breaking out [with acne]. The skincare routine that I had forever just stopped working. I've been working with a herbalist and an acupuncture specialist, James Bae, to help me out. And I have a new little skincare system right now. It's by Corrine Nelson, an aesthetician and dermatologist who lives in the Bay Area, and the quality of the products are so high while being much gentler than some other fancier products. I know everyone swears by lotion P—what is it? P50? But that’s too much for my skin. She says, 'you wash first, then you clean,' so I wash with the Cleanser twice because there's so much dirt in New York, and then I use the Corey Lee Toner, followed by Salicylic Acid.

My two things seem to be killing pollutants and keeping my skin hydrated and clear—that's the game I’m in.

Sometimes I use another product I got from Tulura, which is a brand started by a facialist in New York. She's a beautiful Asian woman who really believes in the power of plants to heal. There's hemp and tea tree oil in her line—I use the Botanical Oil. Eileen also gave me this—it's literally just a plant that I always spray on at the end of the routine to kill bacteria. My dermatologist Dr. Macrene created 37 Actives, and I like that moisturizer as well, but the thing that has impacted my skin the most this past year is laser. Dr. Macrene uses lasers on me and it has cleared up my skin enormously. My two things seem to be killing pollutants and keeping my skin hydrated and clear—that's the game I’m in. 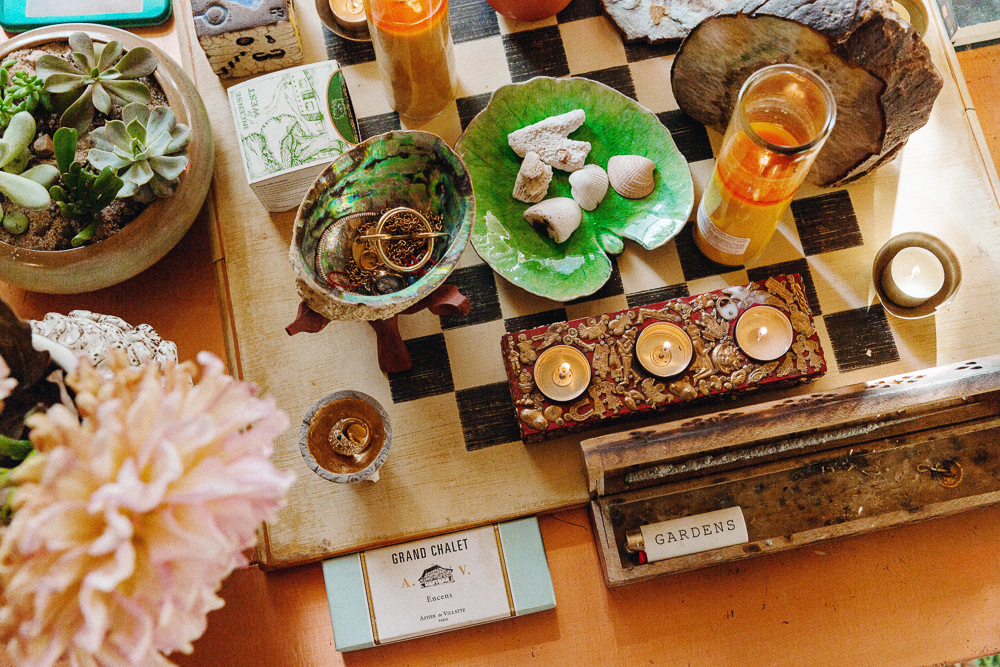 Nicole Warne is my skin guru—she’s one of my dearest friends. She gets all of her information from Melanie Grant, who is an aesthetician. She turned me on to her masks. There is a strawberry mask I'll do occasionally, and Nicole gave me these gel masks [Ed. note: both are bespoke from Melanie Grant]. Together they are super hydrating, and create a glowy, vibrant skin rejuvenation experience. This is the Nicole system [laughs]. I’ll do it all in the same night—if I have an event or a shoot, those are my fancy go-tos. And my body routine is so simple—I just put lavender body oil from Whole Foods all over. I love being covered in the smell.

For makeup, I've been using this random little brand called Illuminare because their products don’t have any pore cloggers. Nicole also put me on to Bareminerals for foundation and blush—my favorite blush is Gen Nude Powder Blush, and for a while I was having fun with Cloud Paint in Beam. I basically try to even out my skin with foundation and put on a little blush, and a little mascara. I’ll do a lip if I'm going out at night—love the Nars liquid lipsticks and Illuminare’s lipstick in Bliss 340. I've tried to get into doing more with my makeup, but I tend to feel weird. I've been loving the Glossier Play eye pencils, making my eyes green or blue. It just gives a little wink to things. I worked on the Glossier pop-up in Seattle, so I got really familiar with the products. 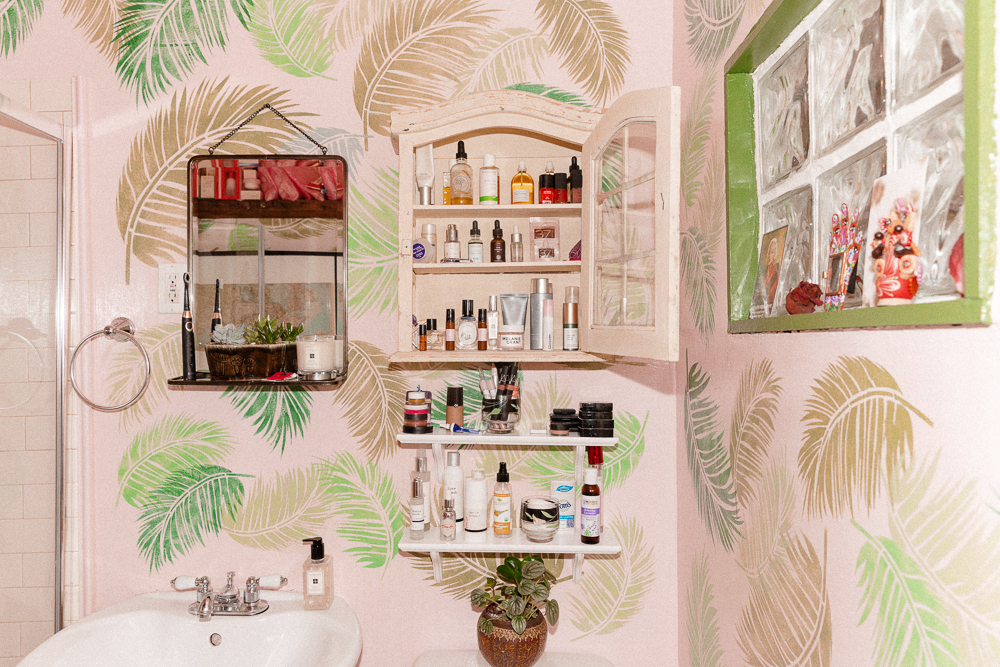 I went with my friends to Egypt, and we went to this amazing perfume shop where everything was made with stone-pressed flowers. That’s where I got Siwa Lotus Flower, which apparently helps people fall in love with you. Then I also got Lily of the Valley. I really like handmade things, as you can tell from my apartment. Nothing is mass-produced, from the plates, to the furniture, to the vases. Most of my vases are from my project manager who has an awesome company called Plant Bowls—it's all about upcycling and finding vintage pots and planting plants in them.

I go to Primp and Polish to do my nails, and I usually go for a deep red. And then I take care of my nails with a cuticle cream that my best friend made. She made it out of things she foraged in the woods, where we grew up. I love it.

Because I am in the dirt so much, I'm not precious about my hair. I use this neem hair lotion from Dr. Hauschka to strengthen and balance—neem oil is really powerful. Today I went to Rob Peetoom, which is this beautiful salon in the neighborhood. It's run by Savana Peetoom, whose dad already has 13 legendary salons in Holland. I also go to a little Japanese place called Berry. The plants in the windows drew me in.”