“I’m from Lawrence, Massachusetts, which is this New England city known for its high immigrant population. There are lots of brown people of color, and Italians who celebrate the Feast of the Three Saints every Labor Day, and the Dominican Day Parade… it’s an amalgamation of so many cultures in one town. But definitely lower income. Across the border is Andover, which is literally the opposite of Lawrence and known for its prep school. I was really, really focused and competitive in school—getting As made me feel good. I got a scholarship to go to high school in the rich town over, and it kind of changed my worldview. There are a lot of politics involved with being a scholarship student at a really fancy school, and being a black student at a predominantly white school. But before Andover I had no idea that you could be a professional artist, or anything like that. A teacher made us watch The Colbert Report during my freshman year, and I discovered satire. I’m Nigerian, and Nigerian parents are really strict and religious, and they either want you to be a lawyer or a doctor. My parents still don’t even know what I do for a living, honestly. I told my mother I was performing a comedy show at a bar recently, and she said, ‘What do you mean? You’re not a comedian, you’re a child of God.’ It’s really a cultural difference. 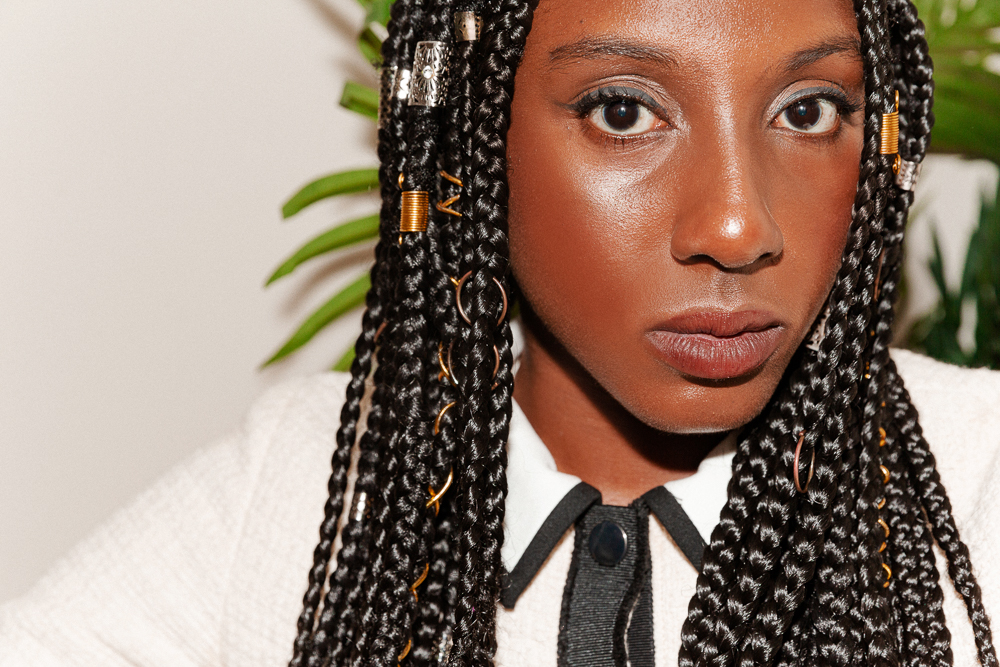 CAREER
I went to Northwestern, and when I first started I majored in math. Even though I knew I was really good at math, I would doubt myself in my classes because people were overly critical of me. People hate women—maybe you’ve heard? Very quickly, I realized that if these math classes were just a microcosm of what was to come, then it wasn’t for me. On a whim, I applied to a Comedy Central internship for eight minority students, and got it. It’s the same internship that helped Donald Glover break into the entertainment industry. I got a joke on The Colbert Report, which was so cool. I came to New York after I graduated and started working for Above Average, which is this Lorne Michaels offshoot. Now I write for Desus and Mero—I find them really radical and thought-provoking.

I also do a lot on the side. I have a live show called Pop Show, where I do musical comedy. I don’t actually think I’m a pop star, but on stage I am—I have the microphone, so you have to listen to me! I also shoot videos for my webshow Baited, where I race bait people. If I ask you if you've ever dated a black person, what’s your answer? That’s race baiting. As children, we learn that Martin Luther King was real good and racism is real bad—and that’s kind of all we learn about race in America. The more comfortable we are with this, the more we can connect interpersonally with others despite implicit biases. I am very wary of the idea that if you say one wrong thing, you’re out—but with that being said, you shouldn’t say racist, sexist, or homophobic things. If people yell at you for that, you have it coming.

As children, we learn that Martin Luther King was real good and racism is real bad—and that’s kind of all we learn about race in America.

WELLNESS
I don’t work out. I used to be a member of Equinox, but I quit—not because I was protesting Equinox, but because of poverty. It got to a point where I was only using it to go to fancy bathrooms throughout Manhattan—it’s not reasonable to pay that much to pee in Gramercy. Instead of working out, I sit a lot. LTS—love to sit! My new thing is that I’m trying to be a vegetarian. I was raised in a household where it’s not a meal unless there’s meat, but I love animals. I will say, I frequently relapse. I didn’t realize that you’re not a vegetarian if you eat fish. Also, chicken nuggets are not vegetarian. So, I’ve been a vegetarian for the past three days.

SKINCARE
I went to the dermatologist and she read me for filth. She said, ‘You have dermatitis, and acne, and discoloration,’ and she made me buy $100 worth of ointments. She really did that. All that is to say, I’m in the midst of a skincare transition. Really, I want to have the face of a baby—and that’s a lot to ask. I’ve been cooling on using the Kiehl’s Midnight Recovery Cleansing Oil ever since that dermatologist said I was ugly, and I usually wash my face with Cetaphil. Then I’ll do the Kiehl’s Ultra Facial Toner. I like to look at the cotton pad and say to myself, ‘Wow, I’m a dirty girl.’ After that I use the Fresh Black Tea Essence, which I found by Googling, ‘How do I look like a googoo gaga motherfucker.’ Does it do anything? I don’t know. But it smells great! Then I use this Drunk Elephant C-Firma Serum that I keep in the refrigerator, but again, I don’t know what it does. And then I usually use the Kiehl’s Ultra Facial Moisturizer with SPF 30. I’m African—I don’t think my parents have ever put on sunscreen, and the idea of it is very foreign to them, but they look nine. My parents are nine years old. I’m open to the idea of sunscreen because I want to look four. I’m not about to get played by the sun. 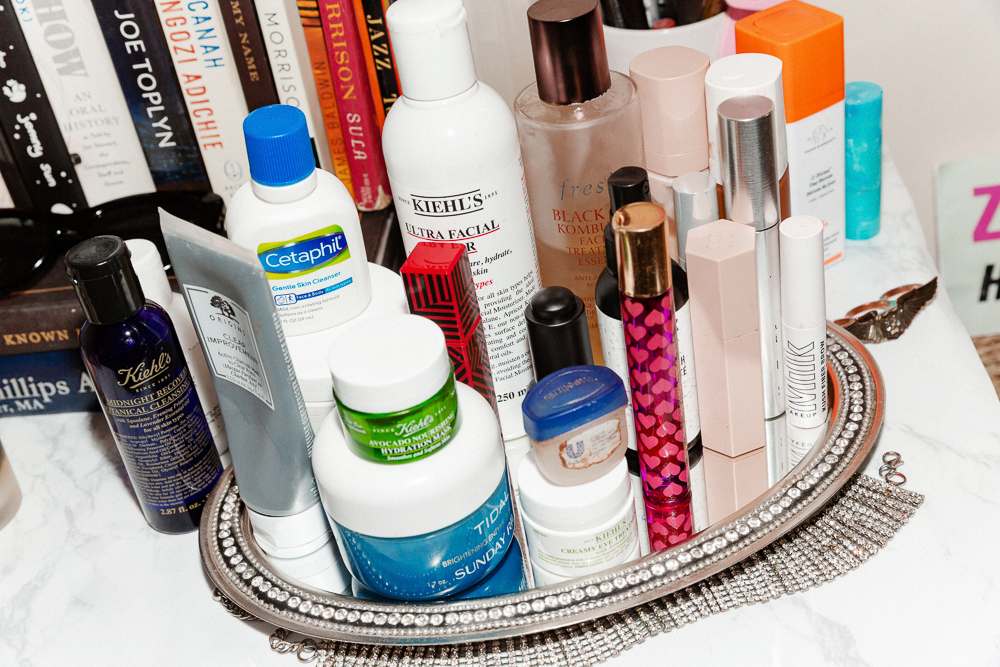 At night, if I’m doing a video or photoshoot the next day, I’ll cleanse and then do a mask. I love the Origins Clear Improvement Active Charcoal Mask because it makes me feel like someone is pulling my skin apart—it’s some Eyes Wide Shut shit. For hydration, I love this Kiehl’s Nourishing Avocado Mask. I got it as a free sample and have been milking it ever since. It absorbs so well. I also love the Ultra Facial Overnight Hydrating Mask, which is fresh as hell. Good Genes isn’t a mask, it’s lactic acid, but people love it. I haven’t really felt the effects, but I do feel very successful putting it on. Like, oh my God, am I Estée Lauder? Then I’ll use the Midnight Recovery Concentrate and Sunday Riley Tidal Enzyme Water Cream. I think it’s good? Last, I use the Creamy Eye Treatment from Kiehl’s. Skincare is time consuming, but the reward is having the face of a newborn baby. I don’t want to brag, but I was carded seeing Girl’s Trip at Union Square Cinema.

MAKEUP
My mother was a beauty queen, just absolutely gorgeous, and she never wears makeup. I didn't realize I could wear makeup until high school. I had no idea what I was doing—I was probably messing up my skin and that’s why I’m ugly, according to my dermatologist. I’m clearly still traumatized by this visit—I have to let it go. Now, I’ll start with the Fenty primer and then use Naked Skin from Urban Decay in Deep Peach, which is a color corrector. I have eczema, so I have some dark spots—I blend that below my nose, under my eyes, and on my eyelids. You’ve got to blend, ladies and fellas. Then I put the Fenty Match Stix in Suede over those patches, and then I use Fenty foundation in 445. After that, I look like Naomi Campbell. I use the Espresso Matchstick to contour and Cinnamon to highlight. I’ve been on shoots where they’ve told me to wipe my face because it was too shiny for the cameras—I love a highlight. 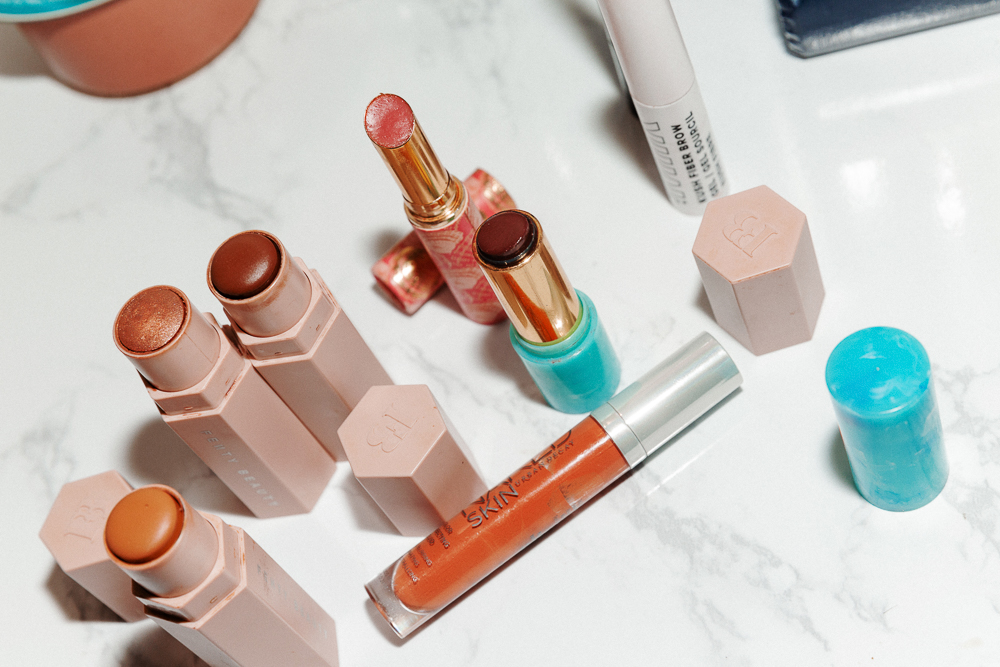 I rarely wear eyeshadow but I do love Revlon Colorstay Liquid Liner, which I think is the easiest to do a cat eye with. And then I use Milk Kush mascara. They told me it will make my eyelashes thicker, and I believed that because I’m the most gullible consumer. But it does make my eyelashes look really long—I look like a camel. I use the Milk brow gel, too. For lipstick I love Tarte—Nude is fantastic and I swear by Yachting, a dark purple, brown-ish one. That’s the kind of color my mother always wore, if she wore any makeup. Woah—I’m becoming my mother.

HAIR
I had a relaxer when I was a kid, which I never wanted—I was bullied into it by some very strong-willed hairstylists. They’d slap acid on my head, and then I’d cry, and they’d say, ‘Shut up, why are you crying?’ I think having acid on your head is bad for you, but hey, whatever, live your truth. Now my hair is natural and I have a straight-up ‘fro. I definitely break combs and brushes frequently. Lil’ Wayne said, ‘tougher than Nigerian hair,’ and that’s real, which is why I’m team wig life and team braid life. I have two wigs that I got from Alibaba. One looks like Rihanna in the summer, and the other looks like Rihanna in the winter. I’ll spend $200 on a wig and have it for a year—I just have to flat iron it and make sure I wash it so it doesn’t get too stiff. Braids are easier, but they cost more because I have to redo them every six weeks. When I got braids as a kid, I used to think that my mother was oppressing me. Now, I have a person who comes to my house to braid my hair, and she does it in two hours instead of eight. She’s fantastic—her name is Inna. I get medium-sized braids because you get the best effect without having to sit there for a miserable amount of time.

This is a protective hairstyle, so I can avoid using a ton of product. I wash my hair with Cantu shampoo and conditioner, and then use a Cantu leave-in conditioner. When I wear my hair out, I use castor oil just to give it some moisture. I’ll either wear it in two puffs, or slick it back with edge control and put on a phony pony. If I’m doing that I’ll blow it out straight, but in general I really try not to put too much heat on my hair. It will fall out. I’ll look great, and then I’ll be effectively bald.

FRAGRANCE
I wear Estée Lauder Beautiful, but don’t think I have it right now—I might, but I’d have to go through a bunch of tampons to find it. I wait to get it from my mom for Christmas every year because I’m cheap. It smells like old glamour—it’s my favorite. If I don’t have that, I’ll use whatever I can find. I like this Tarte rollerball because it smells like Juicy Fruit. Or I use one that I stole from my roommate, Jimmy Choo Man Ice—for the man who likes ice! It makes me smell like a dude, which wards off predators.”