“I partially grew up in Maryland and New Jersey, and my parents moved us to Newport Beach when I was 15. I started out modeling when I was a baby, but I would cry too much, so I stopped. I came back to it when I was 12. I was always going on castings, but the plus industry wasn't fully formed at the time. And also I was a size 10, and the plus sample size is closer to size 14, which is what I am now. I probably booked one job each year I was in high school. It was hard because everyone was telling me to gain weight, but that’s not what you really want to do when you’re in high school. I had this never-ending battle of not being good enough, not feeling beautiful in any area of my life. And that's really hard when you're pubescent and hormonal and just want to be loved. So I took a break from it all and quit modeling.

At the same time I wanted to be a singer, so I started taking singing lessons when I was 12, and began writing music on a ukulele at 15. I put out my first song when I was 16, and most recently I released an EP in June. My uncle is Steve Aoki and he's always been an influence for me. And I've always sung for him, even when I was younger and bad [laughs]. Growing up, I didn't understand the weight of my family. He and Devon [Aoki] are both massive Asian influences in the music and fashion industries, and I’m so grateful for how the two of them paved the way. 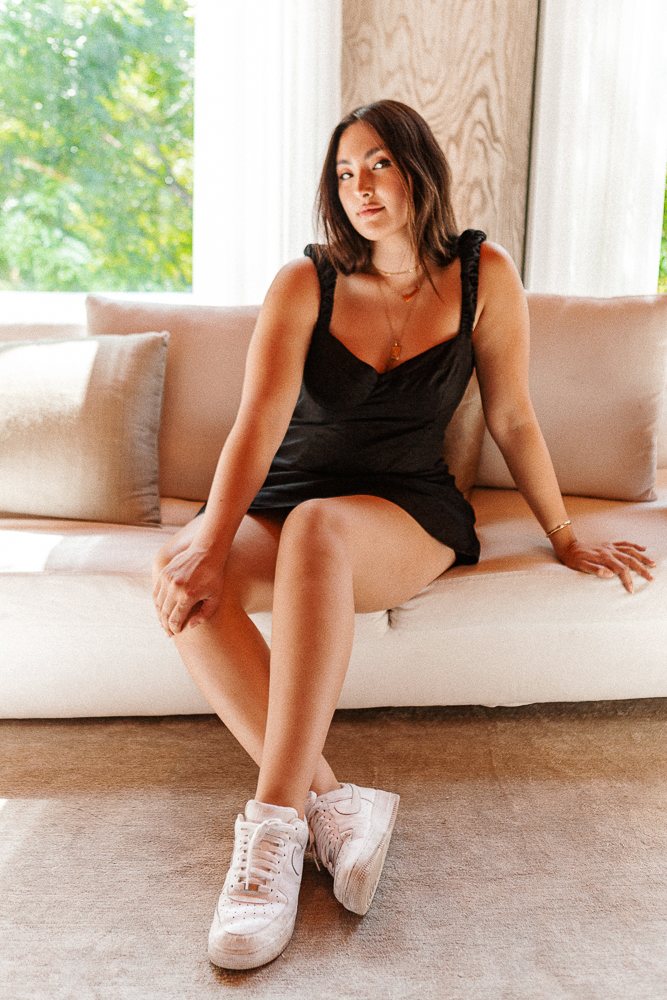 I came back to modeling in 2016, after I found my worth and a love of my body. I was so tired of holding this stress of always thinking, ‘I'll be happy when I'm 40 or 50 pounds lighter.’ It felt like I’d spent my whole life chasing a number on the scale. I just decided I wasn't going to live by that anymore. I started following plus-size models on Instagram like Hunter McGrady and Ashley Graham. I saw their body positivity and didn't believe it was real at first. But it is! It works!

I’ve had terrible acne most of my life—it even kept me from doing work. But then I went on Accutane for six months and it changed everything. Getting off of that, I was only using Cetaphil for a while, but when I started working more the heavy makeup began taking a toll. That’s when I started using a makeup wipe by CeraVe, the Ultra Gentle one, at night. After that I use Glossier's eye makeup remover—I've gone through like four bottles and it's so good. It doesn't sting your eyes or feel harsh or drying. Then I go in with Farmacy’s cleansing balm. That is key. Using the cleansing balm after two makeup removers gets rid of everything else. Then I wash my face with Farmacy’s face wash because the balm is kind of oily and you want to get that off. After that I use my moisturizer, Peter Thomas Roth’s Water Drench. I like that it's really lightweight and not greasy. I only use it at nighttime because if I use it in the morning my makeup will slide off. 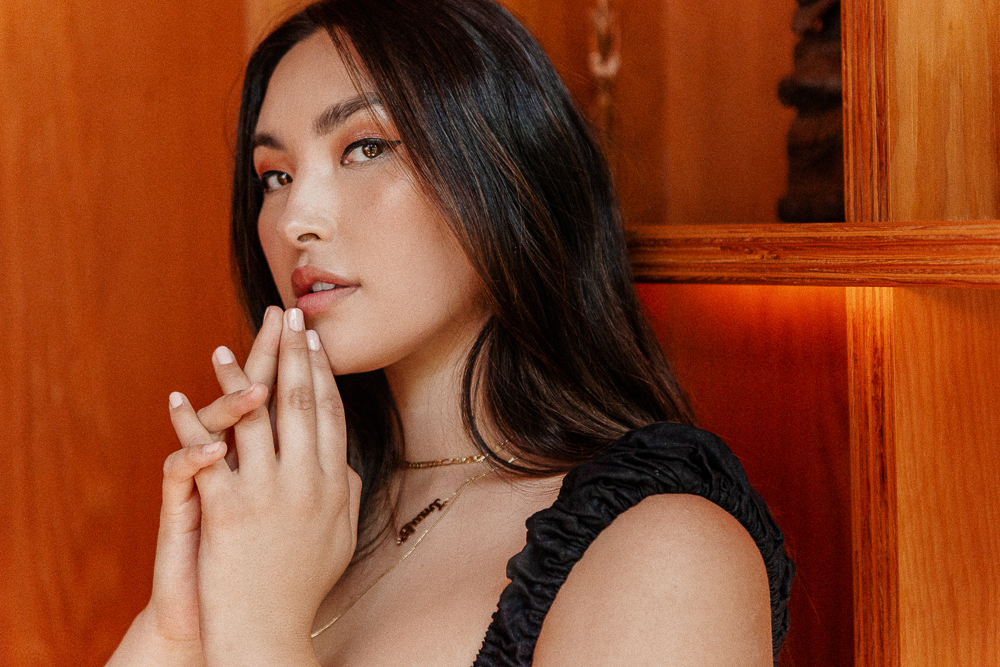 The biggest thing that's helped my skin is Caudalie’s Overnight Detox Oil, which is actually a serum. When I started using it, I noticed my skin clearing up a lot. It's not tightening, but it's refreshing, and when you pat it into your skin you feel cleaner. After that I use an eye cream by Sunday Riley. I don't know if it's helping me or not, because Asians start aging when we’re like 90. In the morning, the only thing I use is the Farmacy face wash and Elta MD sunscreen. The Elta MD sunscreen is so nice. I've been using it for years because every dermatologist that I've ever gone to has recommended it. It goes on clear, but it leaves a nice residue afterwards. People will say things to me like, ‘Wow your makeup's so smooth!’ or ‘What highlighter are you using?’ But a lot of times it's just the sunscreen on my skin.

My goal is to wear as little makeup as possible. I do Make Up For Ever’s HD foundation stick in my t-zone, because that's where most of my [acne] scarring is. Then I use Tarte Shape Tape under my eyes. With that concealer, you just need a dot and it covers your entire face. Then I use a bronzer from Marc Jacobs, and the Milk Lip + Cheek stick in Perk. I put a little on my nose, so it looks like I have a tan. My favorite step is when I use Charlotte Tilbury's beauty wand. It's a liquid highlighter that has a sponge at the end, so I just do a few dots on my cheekbones, my brow bone, and my nose. A little goes a long way with that, too—sometimes I go a little overboard and have to take some off. I used to use so much makeup [when I had acne], but now I'm adjusting to my new skin. I sound like a snake [laughs]. 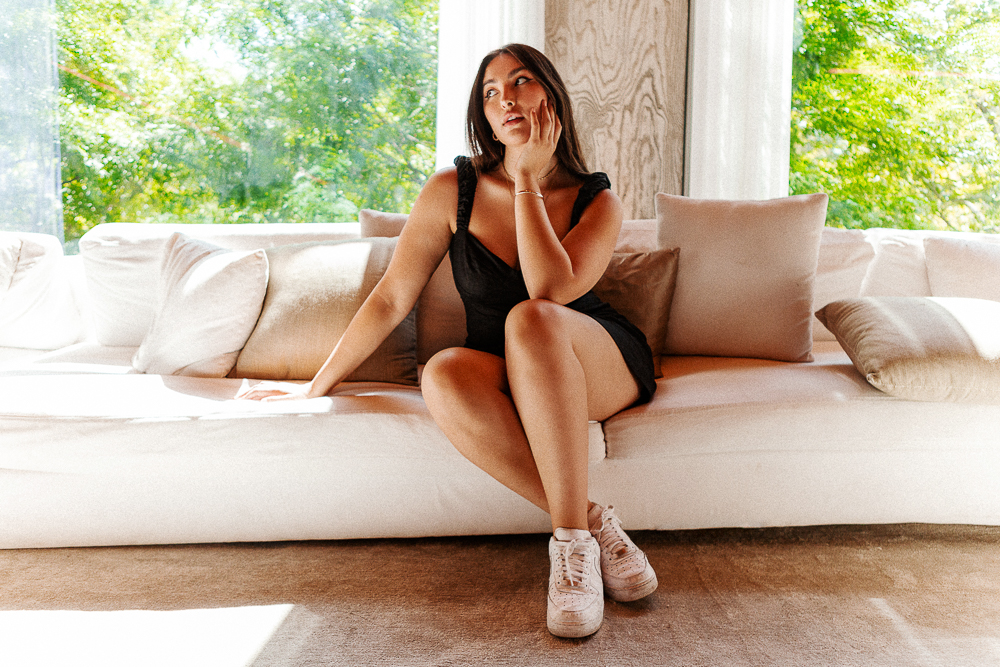 After the beauty wand, I use Glossier Boy Brow. I fill in a little bit with the Hourglass brow pencil at the end, but Boy Brow is my main brow product. I watch a lot of makeup artists and what they use, and if I notice a consistency with a million of them, then I'll just start using the product too. One thing that everyone in the industry uses is Boy Brow—I use it in Brown. Then I do Urban Decay Primer Potion if I'm doing eyeliner. Kat Von D Tattoo eyeliner is my favorite eyeliner—I can go all day and it's still there. I also use the Shu Uemura lash curler that people have been raving about forever. I was using my CVS brand for years, and then I tried the Shu Uemuera one and then I thought, ‘Holy shit, I'm never going back.’ Sometimes I don't even wear mascara because the curler kind of works as a lash perm. Then I use a Maybelline mascara, and my last step is Burt's Bees lip balm. I have a million of them because they're all tinted, and because naturally, my lips are kind of a dead, zombie color. I could probably do without everything else, except for that lip balm.

My hair has a natural wave to it, but sometimes I'll use Bumble and Bumble’s heat protectant and a curling iron to give it more body, and then Oribe Dry Texturizer to make it look beachy. I use Biolage shampoo and conditioner. I'm strict about the Biolage conditioner, but for shampoo all I care about is that it's sulfate free, so it won't strip my hair color. Raphael Silerio at Ramirez Tran in LA cuts my hair. I have him thin half of my head, but it always grows back in two weeks. He adds a lot of piecey-ness—I hate when my hair is flat.

You know when you chew gum and you feel like you’re the freshest bitch out here? It's like your whole body chews gum—my favorite thing ever.

For body, I always use some random body wash from Target, but if I have time to go to Sprouts I'll get Jason. I mix it with Dr. Bronner's mint body wash because it makes me feel super clean. You know when you chew gum and you feel like you’re the freshest bitch out here? It's like your whole body chews gum—my favorite thing ever. When it comes to lotions I always want something repairative and moisturizing and kind of oily, so I use Eucerin's Intensive Repair. For some people it might be too thick, but living in California where it's super dry, I need that moisture.

I did not know people got spray tans until two years ago. I would go out in the sun for hours and my poor skin would get so damaged. But then in 2016 a [modeling] job asked me to get a spray tan, and I caught on. I don't do them often, but when I do, I go to Heathers in West Hollywood. The maintenance is just too much for me. To be a consistent tanner you need to go every two weeks, and then you’re sticky and gross for a whole day. 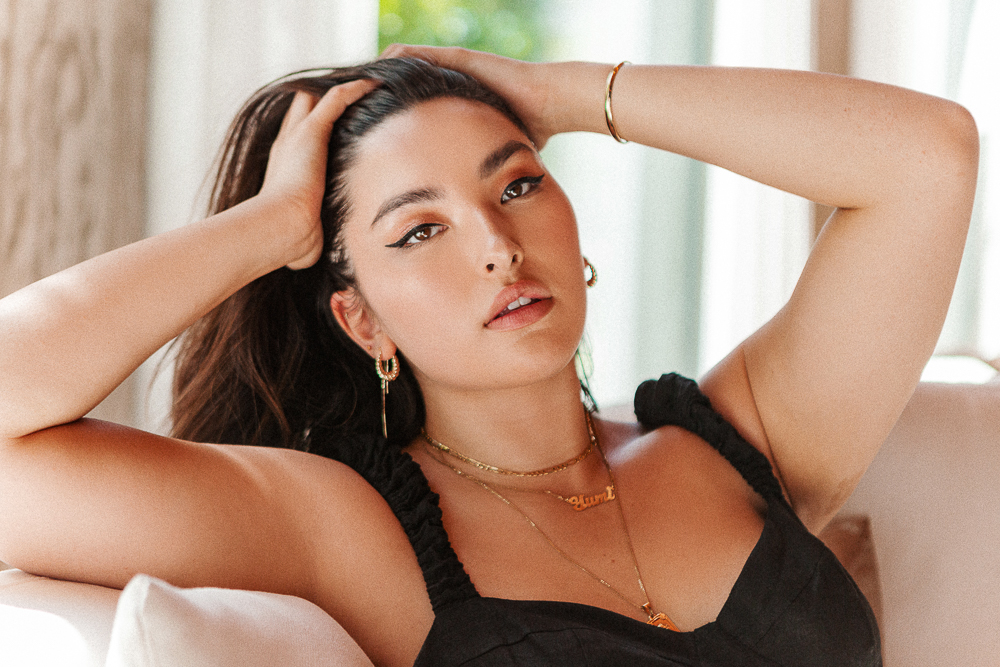 I'm getting better about fitness. When I do work out, I go to the Cobra Fitness Club in LA. I'll go to a cycling class or whatever they have. They have a weekly class in Runyon and other parts of LA. They do barre, too. I'll go to those classes, but I moved into a building that has a gym, so I'll do 30 minutes of cardio and work out one part of my body there every day. Nothing crazy. I also like Alexis Ren workouts because they are doable. I did one last night. If you're traveling, YouTube is a good way to work out for 10 minutes.

My go-to fragrance is Dolce Gabbana's Imperatrice. I've been using that for the longest time because I'm obsessed with clean smelling things. The other thing I'm obsessed with is Glossier's You perfume. I usually don’t trust perfumes from brands that didn’t start out as a perfume brand, but when I smelled it, I thought, ‘Oh, I really like this.’ I switch between those two, and then I switch on and off with Le Labo's Santal, which is the city scent of LA.”