“I'm originally from Thailand. I was born in the north, grew up in Bangkok, and when I was 10 or 11 I moved to the States—to Omaha, Nebraska. A lot of my mom's side of the family lived there. On one hand it was exciting because it was America, but then there’s not much to do in Omaha. When I started, there were two other Asians and two other black kids at my school, and that was pretty much it. I retreated in the beginning, but then I thought, ‘Fuck it. I don't care about fitting in.’ I was a nerd and did my own thing, and what I liked most was going to a vintage bookstore called the Antiquarium. They had cool cassettes and old vinyls too, so I also got into music. And then I would go to the one bookstore in the mall that had a ton of fashion and international magazines. That was when I was 11 or 12, so I became interested in fashion very early on. 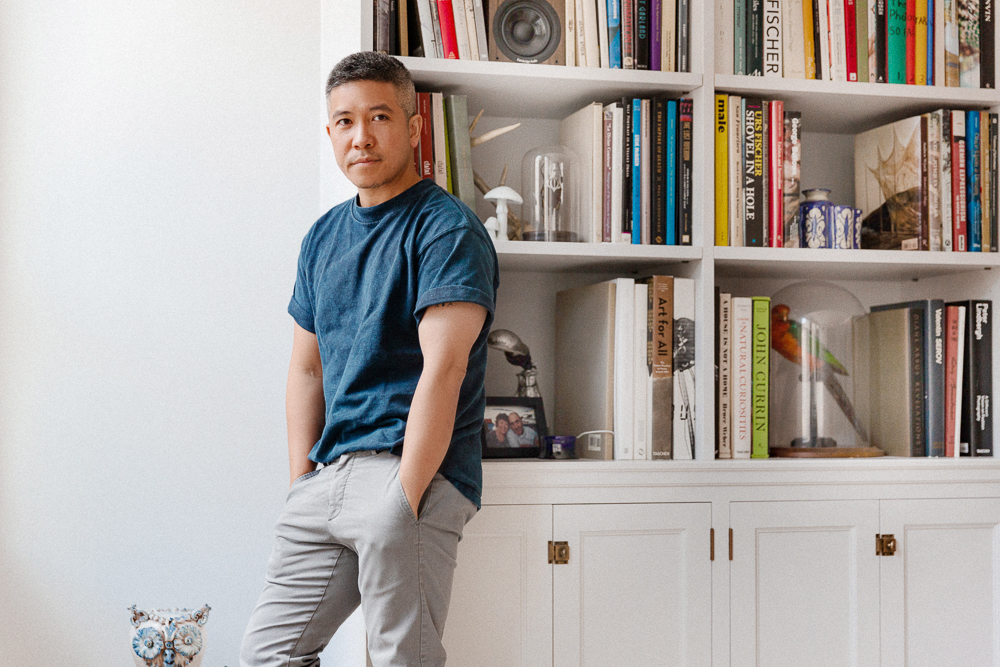 EDUCATION + CAREER
For college, I got a scholarship to go to BU [Boston University], so I went there and majored in business. I thought I'd get the degree and figure something else out for myself afterwards. I moved to New York as soon as I graduated. I knew I wanted to do something creative for a living, but my mom discouraged me from getting into fashion. She was a seamstress, so for her it was just a way to put food on the table—not something you could make a career out of. But after a month living in New York, I got a job at J. Crew as a production assistant. I stayed in production for six months, got laid off, and then was re-hired in a merchandising role. With that job I got to see fashion from a different perspective. I worked with designers, and I thought it was all pretty cool. After about a year doing that, I wanted to explore more high fashion stuff. I had a friend who was working at Harper's Bazaar, and she knew that Kate Betts was looking for a fashion assistant. I said I didn't write, but she told me to try it anyway. I got the job and spent four years at Bazaar. I started as a Fashion Features Assistant, and then moved on to front of book stories. 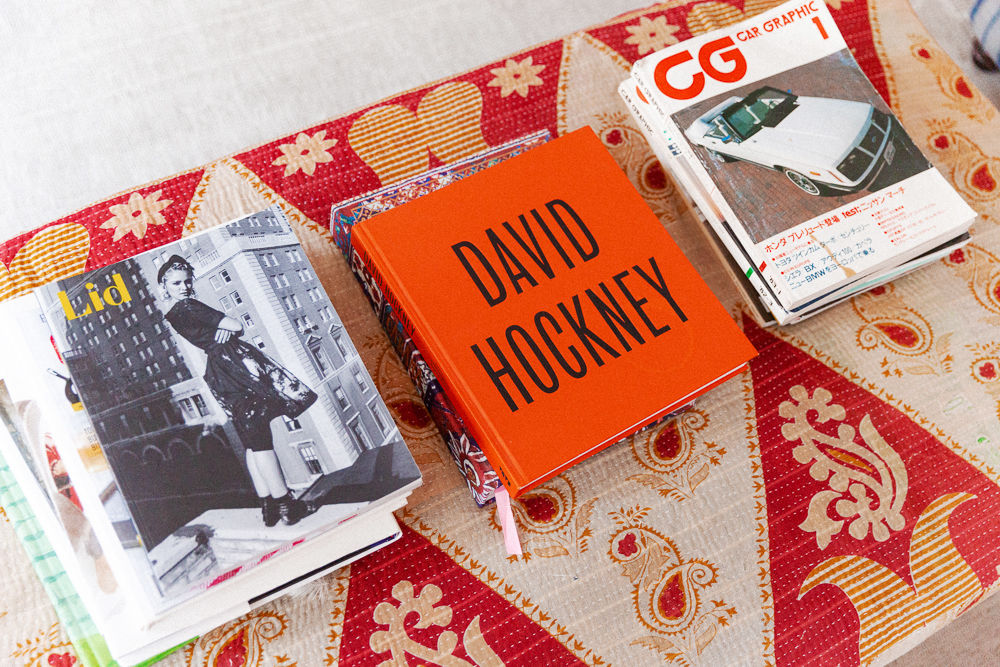 I started thinking about my next career step after two and a half years into that job. I knew I enjoyed hanging out with designers, so I decided to take classes at Parsons at night and on the weekends. I knew how to sew from when I was younger, but I needed a crash course on pattern-making, construction, and machine sewing. After a year and a half of that, I looked for a job in design, but people wouldn't hire me. My response was, 'Fuck it, I'll just start my own collection.' That was the summer of 2004. I put a collection together in three months. We did 10 looks and I had a photographer friend help to take the pictures, and then I had a casting friend from Bazaar who helped me get models. I didn't know what to expect the day of the presentation, but it was packed. The next day Vogue called because Anna Wintour wanted me to come in and show her the collection. For me the collection was marrying the idea of American downtown casual clothes with French couture. For example, I used silk taffeta, but washed it to give it a T-shirt finish. It was bringing a fucked-up, casual approach to precious fabrics. Sally Singer did the review. I remember she said it was like somebody took their grandmother's couture and stuck it into the wash.

I'm looking to address a broader spectrum of people with my clothes today. People who don’t have a lot of time, who have a lot to juggle, and who don’t want to spend too much. All of that feeds into the customer, which is also me. I used to buy designer clothes, and even though I can still afford to buy them, I don't want to. That's not a choice I want to make anymore. Why don't we just do something more simple? Pare back everything. Runway used to be 150 styles. Pare it back to 23 styles that are really well-designed, great quality, and reasonably priced. It's really that simple. I also started a magazine because I was missing editorial. I'm a magazine junkie, and I will always be, but I hadn’t really looked at magazines for the past five years. Or I would only look at vintage magazines I bought from eBay, or cool magazines from Tokyo. I paid attention to what I was responding to and what I wasn't responding to, and went from there. 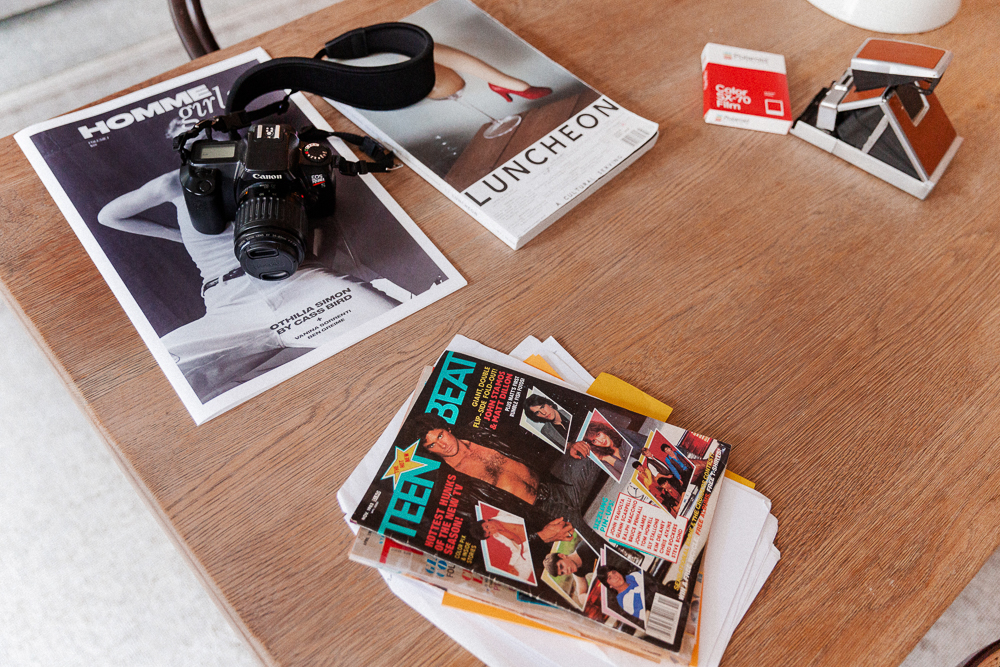 SKINCARE
You always hear that Asian skin doesn’t age, but that's not true. I started paying attention to my skin two years ago, after my mom and I went to Thailand to visit family. While we were there, my mom went to this amazing hospital to treat her dark spots. The hospital is in Bangkok, and going from floor to floor, you can literally see a dentist, get Botox—anything. She went there and did one laser treatment that was 15 minutes long and $200. She came out and her face was messed up, but then two days later she was so beautiful. After that she started to pay more attention to her skin—and, mine. I had never worn sunscreen before then, when she told me to put it on.

You always hear that Asian skin doesn’t age, but that's not true.

Now, I wash my face whenever it feels dirty. That could be midday, after a meeting or something. I don't have a lot of products, but of the ones I have, a lot of them are hydrating. At night, the first thing I do when I get home is wash my face, and then I put on this high-potent CBD oil from Saint Jane. I don't feel the ‘calmness effect,’ but it makes my skin glow a bit. It also evens everything out—I used to get dark circles under my eyes, and it took those away. I cleanse with Kiehl's Ultra Facial. My husband's been using the Aesop cleanser, but it's so expensive. I'll spend money on oil, but I don’t think it’s worth it for a cleanser.

After the Saint Jane oil, sometimes I put on another layer of Aesop—the Mandarin Facial Hydrating Cream—right before bed. It’s just so I have another layer of hydration. Sometimes I’ll do Aesop's Chamomile Facial Hydrating Masque. It's a mask that you can keep on, or if it's too thick for you, you can wipe it off with a toner. You feel like it's doing something. I don't have dry skin, but I'm nervous about dry skin—I don't know.

In the morning I put on a CBD cream, Superflower. The Saint Jane makes my face look oily, so I only use it at night, whereas Superflower does not. Sometimes I use eye cream from Aesop. The eye cream from Tata Harper is really good, too—apparently you can eat it. Then I put CeraVe sunscreen on top of that—it's light and it doesn't sting my eyes. Other sunscreens may smell, or they're too thick and oily. This one kind of dissolves. But overall I haven't really gotten into a routine, I'm sort of nervous about that. I think that when you start to do something, you'll have to do more, and I don't want that kind of responsibility. 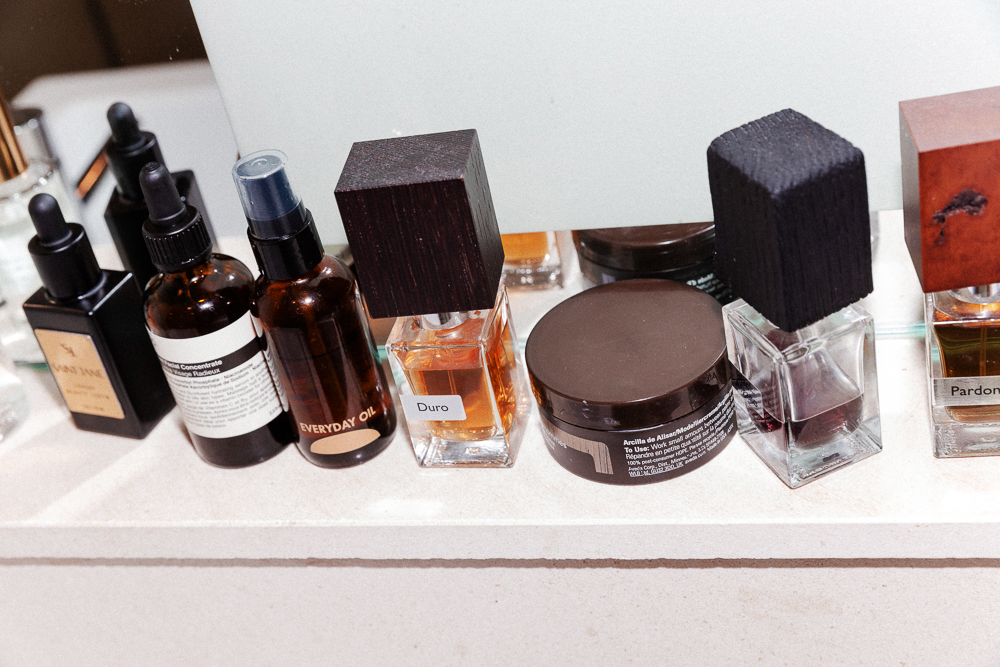 FRAGRANCE
I like dark, tobacco, leathery scents. Monsieur is my favorite fragrance—I always use it, and I've been using Wonderoud from Comme des Garçons for a long time. If I’m wearing something like a Wonderoud, I’ll put my Fueguia Malabrigo oil on top—it blends well. I bought it in Tokyo, but they have a store on Crosby Street, too. I have one light scent, L'Erbolario Black Juniper, but it's also kind of dark—I found it in Capri, actually. It's from a traditional Italian pharmacy brand. And I found these fragrances from Nasomatto in Capri. All of their scents use different ‘woods’ in the notes. Pardon is good for winter, it's really deep, and Duro is a bit lighter.

When it comes to candles, I get a lot from Richard Ginori. We buy a lot of Astier de Villatte. We like the Palais De Tokyo one too, but the Atelier De Balthus is newer and I also like it a lot. My friend owns 12.29, and one of the candles they make is called Forgotten Memory. It's based on a scent I made for one of my runway shows and it's one of my favorite candles overall. Farmhouse Pottery, Frederic Malle, and Saturdays also all have good ones. My husband loves candles, so we buy a ton of them. 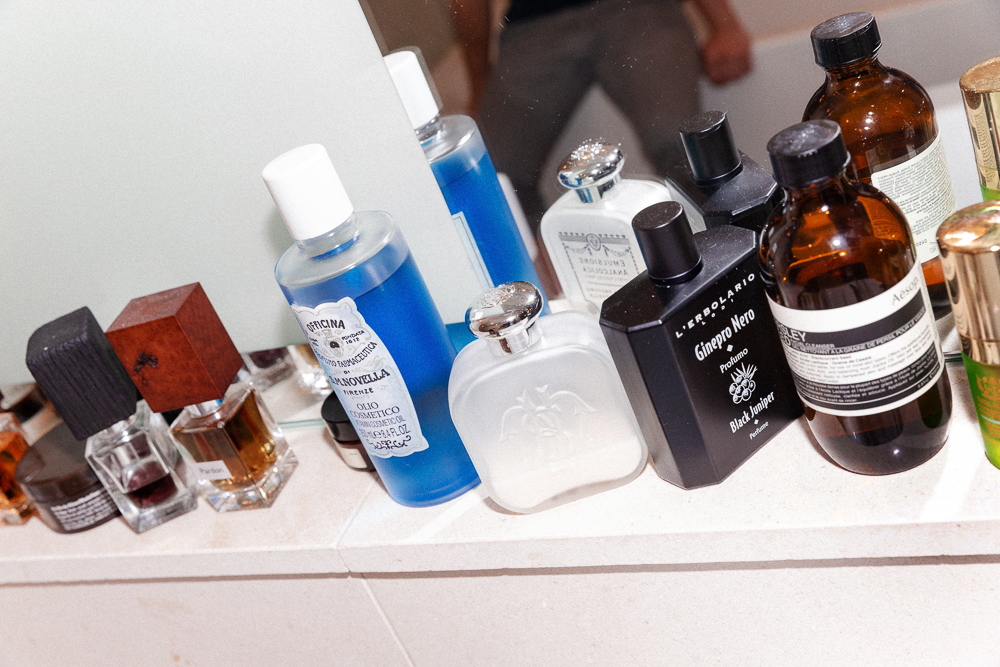 BODY + HAIR
We use Santa Maria soaps a lot, and I use a Kiehl's body gel sometimes, or an Aesop scrub. I also use a simple drugstore body lotion from Cetaphil. And I like the CeraVe Healing Ointment, too. It's good for dry skin.

For my hair, I only use a pomade from Aveda. I've used other pomades, but this one works really well—it's natural and clean. I cut my hair every seven days with a guy named Eli. He used to be at Fellow Barber on Crosby Street, and now he's at Tuft on the lower east side. I prefer a really close fade. I have a lot of gray hair now, so I like to keep the fade tight so you don't see that much [gray hair]. Clean and simple.”