“I grew up just north of Chicago in a big Italian family—I have one brother, a half sister, a half brother, and two step brothers. I also have a bunch of cousins who were like my brothers and sisters, you know? We all lived on the same block. My grandma would take me to flea markets, auctions, and estate sales, and those became a love of mine. I have an uncle who was a raw foodist for 30 years, and he would assign me books to read, and meditations to do, and take me to conferences all over the midwest. But there were no artists or queer people in the family… that we know of. My whole family played hockey, so I played hockey—and we owned a few bars, so I basically grew up in a bar. My family is loud, and obnoxious, and passionate, and every conversation we ever have goes to level 100 immediately. The first word I ever learned was ‘fuck.’ When I was in third or fourth grade, my mom made us audition for The Wizard of Oz. I got cast as a munchkin, and I immediately knew acting was what I was going to do for the rest of my life. I quit hockey after that. There were a lot of screaming matches—the majority of my family never thought I’d be able to be an actor. But I always thought that if it was one in a million, I’d be that one.

CAREER
I was taking the train to the city by myself, doing all these different acting workshops downtown. I booked a production that wound up running for five years—I was doing eight shows a week, and missing school every Wednesday, all the way into high school. In school, I was a thespian and did a lot of shows. But by senior year I decided that I wanted to stop acting and go to art school. When I got to art school, I became obsessed with sustainable development and transferred to the business school at Loyola Marymount in Los Angeles. I had long hair, was working at a raw food restaurant in LA to help support myself, and going to Jesuit business school—one of those things was not like the others. I dropped out, and went back to acting—within a couple months I booked a Nickelodeon pilot. I booked my first TV show called The Beautiful Life when I was 20. And now we’re on season six of Younger, and I'm publishing a book in the fall.

I never wash my hair with shampoo. Ever. The texture is better without it.

BEAUTY
When I was growing up, my mom always wore tons of makeup, and did her hair in curlers. She made sure we kept eyes on the hair above her lip—if we saw something, we would let her know and help tweeze. As an actor, I was in a full face of makeup seven days a week, from the time I was 11 years old. It was always so much a part of my life.

From a very young age, a lot of people, including strangers, would tell me I was beautiful. It was only when I moved to New York and had convesations around queer identity, that I started to look at beauty differently. It was also around the same time I got sober from alcohol. Beauty is a construct, you know? It’s something that has been taught to us. We have to re-frame that language, because it’s not helping anyone who doesn’t fit into that category. Beauty is so much more about who we are as people, and how we treat ourselves, and how we treat others. It’s not just what we look like. Inner beauty really does grow and sprout as external beauty. Only when you’re taking care of yourself and the people around you, do you have the power to be beautiful. Fashion has always played a huge part in my life—I saw what other people were doing, and I wanted to create my own version, carve my own path. I can get by doing makeup, for sure, but I don’t do full looks. It’s not that I can’t—if I sat down and tried to learn, I know that I could. I have makeup on right now—concealer, foundation. That’s full beauty, right? 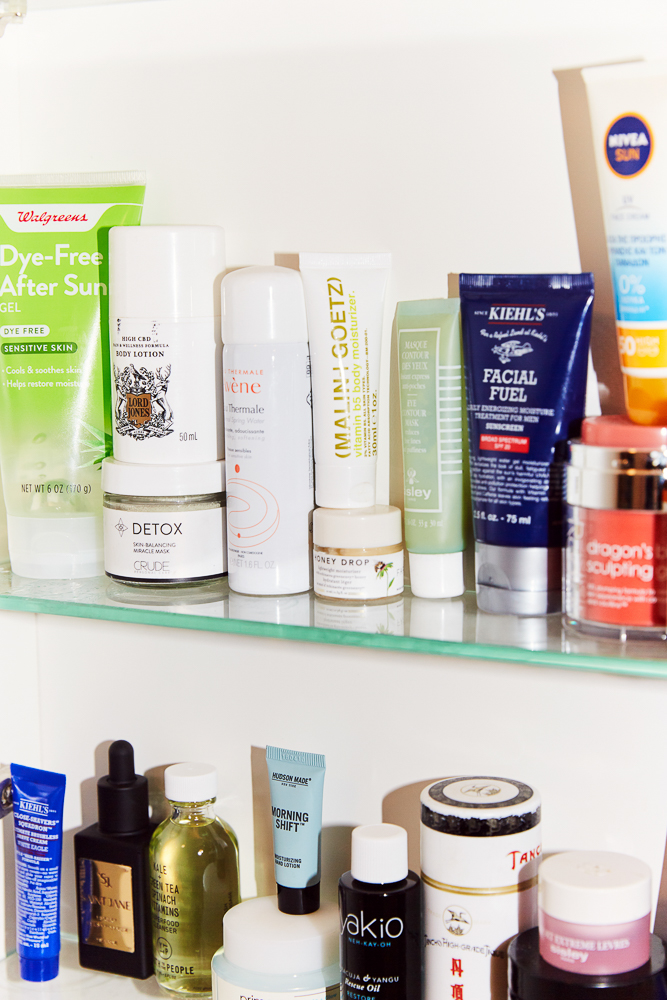 SUPPLEMENTS
Let’s go to the good shit. Gaia has been everything. The things I take every single day are turmeric, adrenal health, gem maca powders, chlorella and spirulina. I’ll heavy dose those last two every day—like, a handful of pills. It’s straight sun-sourced algae, and it helps regenerate your cells and keeps you really healthy. Oil of oregano and olive leaf are both for immunity, but if I’m feeling a little sick or have a sore throat, I’ll hit the oregano. The olive is more preventative. I like kava root if I’m stressed out, and obviously melatonin if I’m going to sleep. Ginger, obviously, is great. Starwest Botanicals tea is also great. It’s all organic loose leaf that you can get from Amazon for super cheap. The maté is for a pick me up. Upstate I have a lot more teas. I take massive amounts of superfoods.

TATTOOS
Tattoos are a big part of my life. A big part of my family’s too—it was a tradition that we all got tattoos at 16. My first was something with Chinese characters because it was the early 2000s, but I’m getting it covered soon. It’s supposed to say ‘health,’ ‘wealth,’ and ‘happiness’ on my back, but once I was at the pool with my ex-girlfriend and her grandma, who is Chinese, and she said that the ‘wealth’ is actually an ancient symbol that means your sex life will be abundant and therefore you will be wealthy. [Laughs] That’s not why I’m getting it removed, though. I’m not Chinese, we don’t need that on my back right now. I also have a tattoo of my grandma—she’s a fucking asshole, let me tell you, but I love her. I put sunscreen on them when I remember to, but more regularly I use coconut oil and aloe. This aloe is from Walgreens—I was so upset because I wanted an organic aloe, but nobody makes it. What I should be doing is getting an aloe plant. I also keep an antiseptic in the shower, because I’m always getting tattooed and it’s good to clean them if they’re fresh. I’ve gotten like 12 tattoos in the past four weeks. I need to calm down.

I’m obsessed with brushing my teeth—I do it four to five times a day. I love the way it feels, but my dentist is really mad at me because I’m destroying my gums.

SKINCARE
My skincare routine is the type of thing where sometimes I’ll use face wash, or sometimes I’ll use hand soap. I’ve always had really great skin and it annoys the fuck out of [my partner] Bethany. We got married and moved in together last year, and sharing a bathroom changed my skincare. I think a little smudged eyeliner is cute, especially when I have an event the next morning, but they won’t let me go to bed with any makeup on. Realistically, I’ll use anything in the shower as a face wash. I have this Kiehl’s Facial Fuel which I’ve been using, and sometimes the Ultra Facial Cleanser lives in the shower. I also have a Joanna Vargas vitamin C face wash that’s really great.

I’ve also started using this Joanna Vargas Daily Serum, and sometimes I go with a vitamin C or retinol from Sonoma Naturals. Some organic shit. I really like this brand Cannuka, which is cannabis and manuka honey. They make these thick, oily creams that I am just obsessed with. I use the eye cream, which is basically a balm, all over my face. We can afford it. This Sisley eye mask was really the first eye product that I started using on my entire face. I use it every day, multiple times a day. It’s just ultra deep moisture. I also like Rodial’s Dragon’s Blood eye mask, and Skin Food. I put a very thick layer of Skin Food on every day. That’s my favorite texture. I don’t even have dry skin! It’s that dew—I love it. 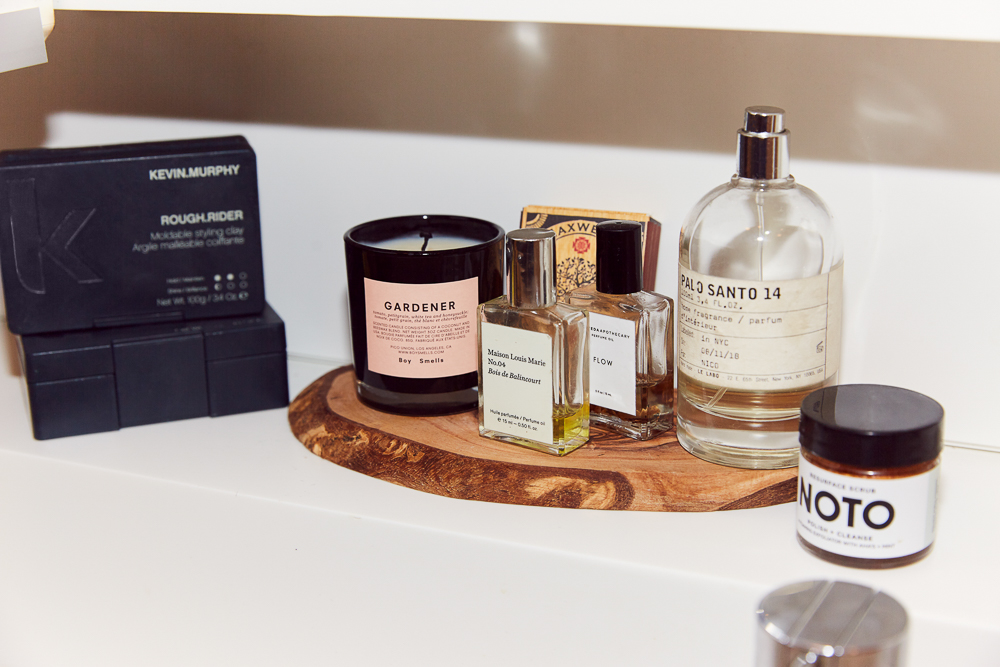 HAIR
I never wash my hair with shampoo. Ever. The texture is better without it. I just put the Trader Joe’s Lavender Salt Scrub on my scalp to clean it. That’s an incredible product. This Goop Himalayan Salt Scrub is actually really good, too. I also like to put coconut oil in my hair, and I do that in the shower because it’s less messy.

My hair eats product. Depending on what I’m doing with my hair, I’ll use different things. For [my character] Josh on Younger, this Got2B Glued is what I use. It’s the cheapest, Walgreens classic, punk rock hair glue. While my hair is wet I’ll douse it in gel, blow it out, and then put some more in to finish it. Murray’s pomade is really, really thick and does not wash out at all. If I’m doing a classic pompadour, I’ll use that and then spray the shit out of it to make it as hard as possible.

I sometimes play with this hair color, Mofajang. I saw an Instagram ad for it and totally loved it, so I bought it on Amazon. It’s just temporary. This bun situation is new for me—to hold this type of [style], I’ll use this product from Kevin Murphy. It’s a super matte, dry clay. It gets your hair so dry and so thick, and it does not wash out. 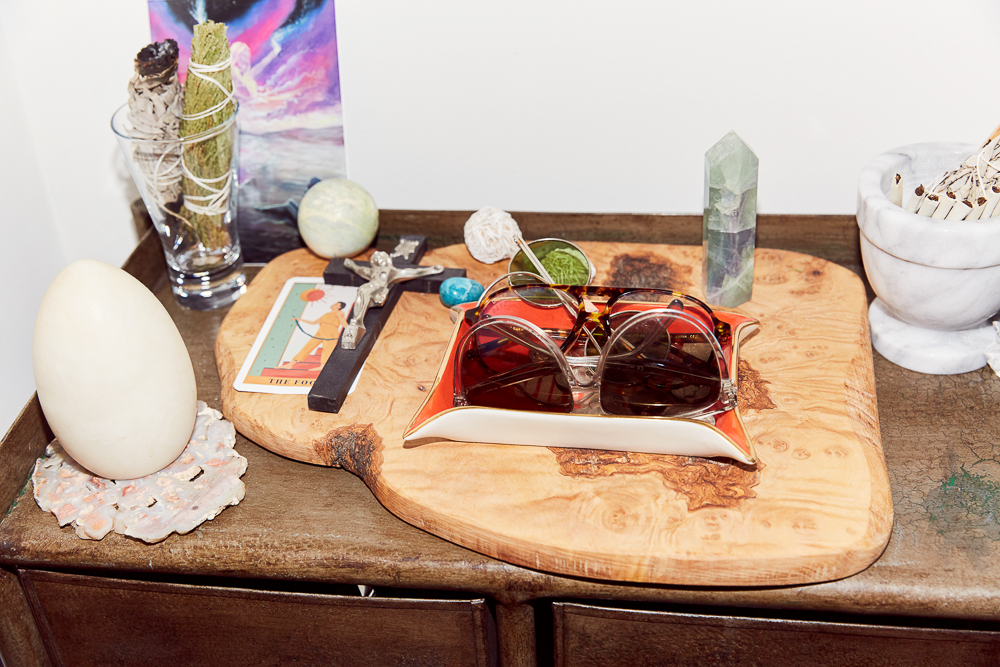 BODY + FRAGRANCE
I’m obsessed with brushing my teeth—I do it four to five times a day. I love the way it feels, but my dentist is really mad at me because I’m destroying my gums. Whatever, there’s surgery for that. We use baking soda toothpaste. For deodorant, I’m all about charcoal—I don’t put anything under my arms that’s not charcoal. This Schmidt’s one is fantastic. When I’m in the shower I wash my body with bar soap—it’s organic, and actually from Cannuka, too. Tiger Balm is my go-to for everything if I’m in a tiny bit of pain. Oh, and Lola makes great condoms.

For fragrance, I mostly use Le Labo Palo Santo 14. Or I do a mix of Maison Louis Marie No. 4 with Ayurveda Apothecary Flow, which smells just like roses. I also love Holy Basil oil as a smell—basil is my everything. My Italian family is part of it, but I also do a lot of work with healers down in South America, and basil is one of their original medicines. Basil and Frankincense is a really incredible combo.”