“I was born and raised in Soho. Then I lived uptown for a little bit, and then in the East Village for the longest time. Soho in the '80s was very different, very industrial. All those lofts were there, but [instead of apartments] they were factories and studios for a handful of artists. My mom's an artist, and she was friends with a woman who was a set designer for a very off, off Broadway fringe theater company. They needed a kid in one of their shows, so when I was 12 they put me on stage. I think I had three lines, and I got paid $100. Then I became a member of the company and they helped me find an agent.

CAREER
I don't feel like I became a grown up movie-wise, until maybe some of the more recent Jason Bourne movies. Or the show Riviera that I'm working on now. I consider my 20s to be a bit juvenile, I was kind of learning as I go. 10 Things I Hate About You was my first big role. I auditioned for it in New York and then they flew me to LA for the screen test, along with a then unknown Heath Ledger. I was 17 when I got cast, and we filmed it the summer before my senior year of high school. Filming was so much fun. We were all very open-hearted and just excited to be there. 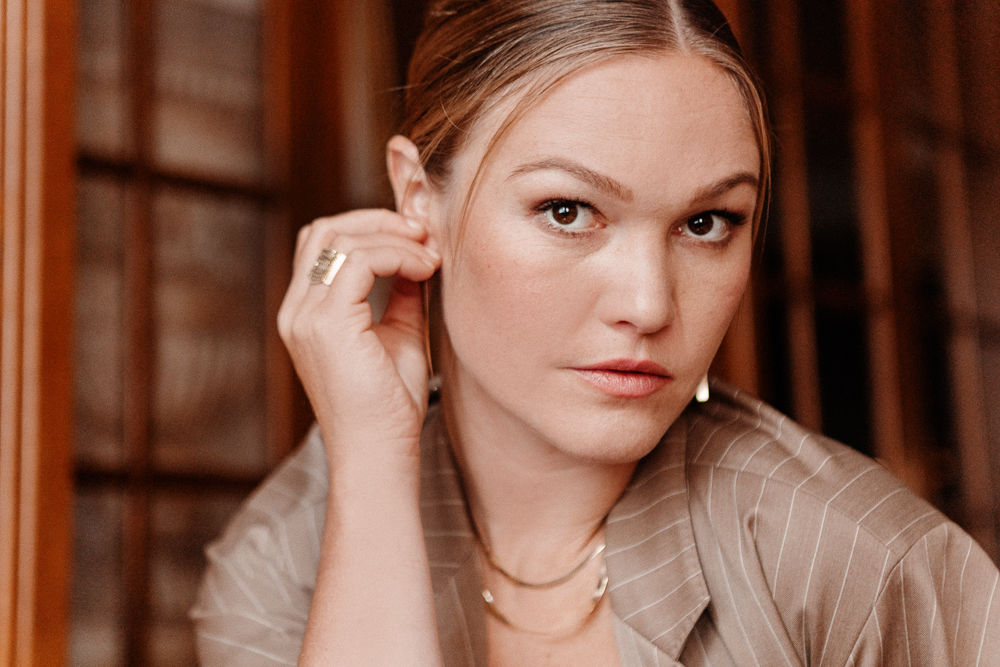 The first big thing I bought with my acting money was college tuition. In order to continue working, I took what some would call a gap year first, and then I enrolled. Columbia helped me keep perspective, and it also insulated me from my major life change [of becoming a movie star]. I studied English literature. I've always been interested in language and words, but honestly, it was the only major that I thought I could get away with. But looking back now, it was actually a good choice. Because largely what you learn is how to tell stories, how to write...and it directly applies to what I do now.

Actors aren’t really in that much control over what they work on, especially when they're just starting out. You sort of have to go, ‘Sure, I'll try this. Yeah, I'll go live in Germany for three months.’ The Bourne movies started when I was maybe 19. I remember sitting in my dorm, reading the scenes for my character and a synopsis of the movie. I had to miss final exams to film it, but that was lucky, because I had no idea that I was going to be in many [Bourne] movies later on.

The first big thing I bought with my acting money was college tuition.

Now I'm a little more conscious of which roles I decide to play. My role in Hustlers is obviously the most recent, and I’m working on a British TV show called Riviera right now. I play a woman who was married to a billionaire living in the South of France. After he's murdered, her whole world is turned upside down. She's hellbent on figuring out who did it, and then finds herself being corrupted by that world and trying to stay afloat. We film all over, like in Cannes and Monaco, Italy and Argentina. It's a bit daunting, but it's fun.

SKINCARE
People have this misconception that actors are good liars. I think we're actually really good truth tellers. A good actor is empathetic and observant, which I'd like to think I am. The focus on physical appearances is actually the hardest part of this job. I definitely learn a lot from makeup artists. Then, being in different countries helps. What they sell in pharmacies and drugstores here in New York versus France or London is very different. 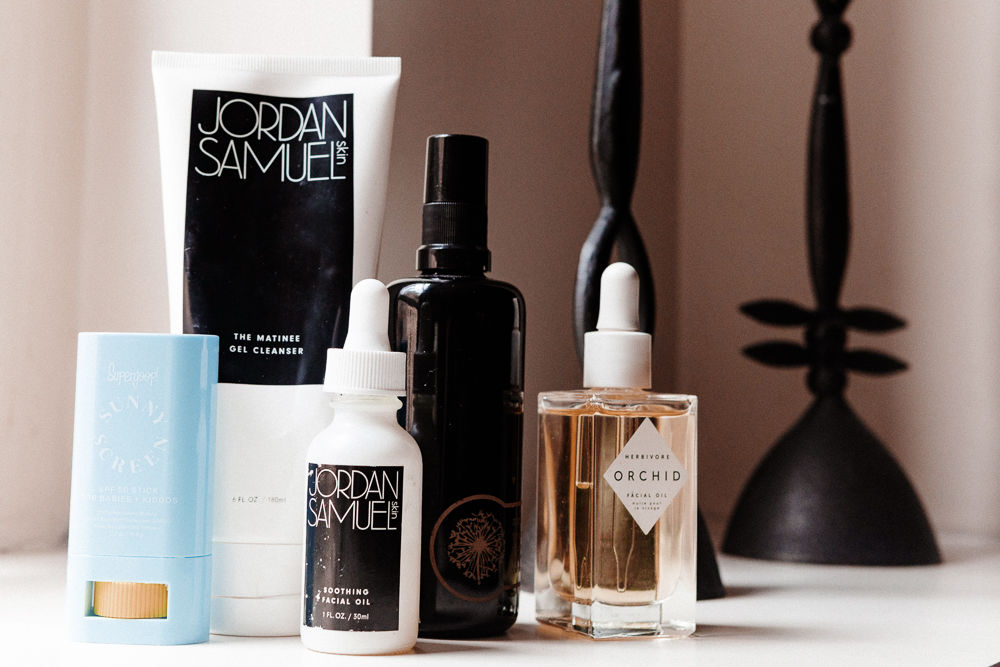 For skincare, I gravitate towards more natural products. I’ve also discovered that it's good to change things up, because climates change, and sometimes you need more moisture, sometimes you need more of something else. Right now I'm really enjoying Kai. They're natural but smell really great. I also really love Jordan Samuel Skin. [Jordan's] an aesthetician, and he has a small company based out of Seattle. I really like the products, but I haven't been for a facial yet. I keep saying I'm going to go... But I like his whole line and his serum is really light, so it works especially well in humidity and warmer climates.

I use Jordan’s gel cleanser, too. It’s really good for removing makeup, feels good on the skin, and I always use that after filming. He actually used to be a ballet dancer, and so he kind of designed it for ballerinas, because they sweat so much under their makeup. Herbivore is another really lovely brand. The oil is nice. It's very hydrating, doesn't feel too heavy, and it smells great.

I get facials a lot when I'm working, because I need to cleanse out the makeup. Here, I've gone to Cleusa Beauty. She's called the goddess of skin, Dayle Breault. I broke out in my 20s all the time—by the way, if you need to get rid of a pimple, Mario Badescu's little pink product is a good one. Now that I'm in my 30s, I'm all about anti-aging, wrinkle prevention. Supergoop sunscreen is good—it helps. I think anything with zinc oxide is better than titanium [dioxide]. I also can be prone to redness, and May Lindstrom’s Blue Cocoon cream is really helpful. It’s very soothing. I've had experiences filming in really cold climates, and when I take the makeup off at the end of the day, my skin will be really irritated from the wind or whatever. But Blue Cocoon is really good at soothing that.

A couple times a week I’ll exfoliate with Dayle Breault’s scrub, although I have to be careful because sometimes it can be a little harsh. Or I’ll use these pads from Dennis Gross. Those are nice because they don’t make me as red. Then, protection. Drunk Elephant has a sunscreen that's kind of tinted, so I’ll wear that, and I find that it also gives a nice little base if you just want to even out your skin. 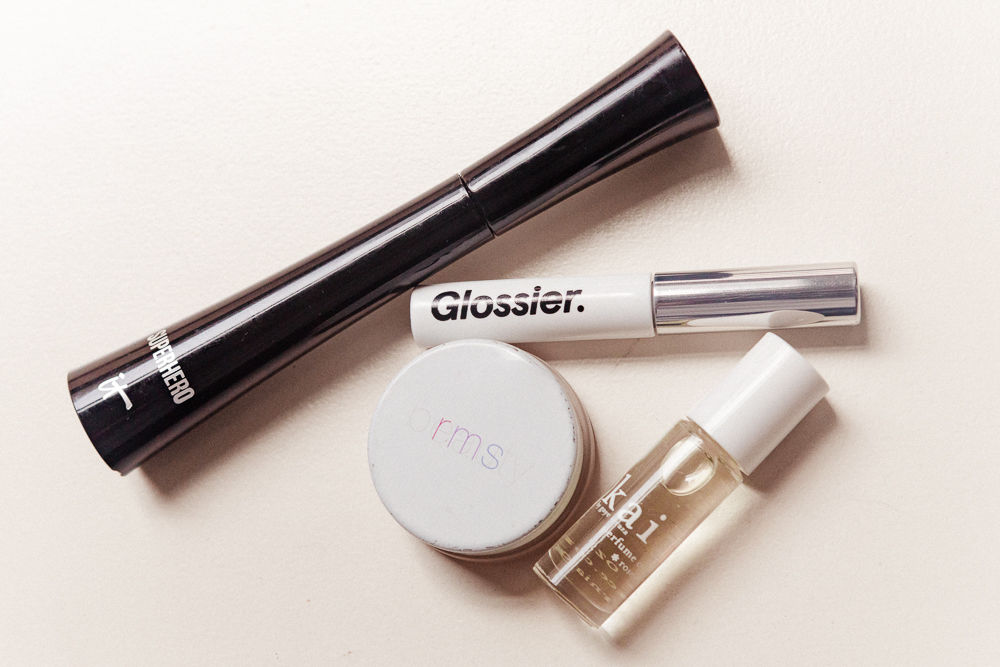 MAKEUP
I try to let my skin air out when I'm not working. I don’t wear foundation as a day-to-day thing, but I feel a bit naked without mascara and some brows. It depends. My favorite mascara right now is by It Cosmetics. I tint my brows at this place in Williamsburg on North 4th sometimes, and then to groom them I use the brush from Glossier. Or sometimes a makeup artist will tint them for me.

RMS Beauty has some really good concealer—the one in the little pot. It's natural and it mostly feels nourishing to the skin. For lip color, I'm a big fan of the Clinique Chubby Sticks. NARS also has good tinted lip colors—I don't like lipstick that's too goopy. I might wear red lipstick on a night out, maybe, but red lipstick is very hard to not smear. I'm more about stains.

For eyeshadow, I like Nars. I like a smoky eye, usually with cooler tones, like slate and charcoal. I'll do a little eyeliner on the outside of the lid, and I’ll use my hands and fingers to apply the eyeshadows. A smoky eye just makes me feel a little edgier, and I find that my eyes can take a lot of color.

HAIR + BODY + FRAGRANCE
If I'm going to blow dry or use an iron, I put on a thermal protectant first. I like the smell of Oribe’s. Other than that, I don't use a lot of products in my hair—I'm sort of giving it a break right now. I find the Kai conditioners really nourishing. If anything, I'm trying to tame my curls. I usually wash it and put it back in a bun like this, to kind of pull some of the texture out. And then as it gets more dry, I'll let it out. Or maybe I’ll blast it dry.

Weleda has a really nice rose deodorant, and Kai has a good body lotion in rose, and there's gardenia in that too. And then they have a nice perfume. I don't like perfume perfume. I actually hate the smell of alcoholic perfumes, chemical perfumes. So I go with either an essential oil, or Kai’s rose perfume.”