“I’m a southern belle from Houston. Texas is cool now, but from the second I was born I wanted to leave and live here [New York City]. When I was younger I was always doing theater, and I was a bible camp theater kid, which is a horrible mashup of subcultures. I was into the bible stuff until I went to college, and then I was so horny I had to stop believing in God. [Laughs] Well, the God I had grown up around. But I still wanted to be performing. I was always obsessed with getting straight A’s and going to the best school I could go to. That way, I could get the fuck out of Texas and feel like I was better than everyone else, even if it wasn’t true. I went to Princeton and studied English and poetry, but I was always acting in student things. At that time, it was hard for me to say I wanted to be an actress, because I didn’t see people who looked like me doing it. Not that I’m weird looking—I’m just not a supermodel. Finding the confidence to say I wanted to do that, and seeing myself represented, was a big turning point.

CAREER
I came here the day after graduation and started taking some classes at UCB. I was doing a million other things, too—waitressing, babysitting, SAT tutoring, working at Casper, the mattress showroom. I think when I’m not busy, I go really crazy. I like structure, having to be somewhere, being around people. Then after about a year of being here, I started doing stand-up and performing more regularly. The first time I did stand-up I was fucking terrified, but once you do it, you get a little high off it and you want to go back. Now I’ve been in New York for six years, and I feel like I’m self actualizing. I’m living in my own place for the first time, I’m doing exactly what I want to do with collaborators I really want to work with. Every Wednesday at Club Cumming in the East Village I host a cabaret comedy night with my brilliant co-composer and collaborator Henry Koperski. I was always doing musical theater, so when I started stand-up I wanted to bring that into my set. I started writing songs with Henry, and that’s when everything kind of took off. I think musical comedy can be really cheesy and shitty, but being really truthful and specific is when the songs turn out the best. He’s on the keys, and I sing and host comedians. Then, I also have a monthly show at Joe’s Pub—it’s me with a full band for an hour, doing my original songs and stand-up. 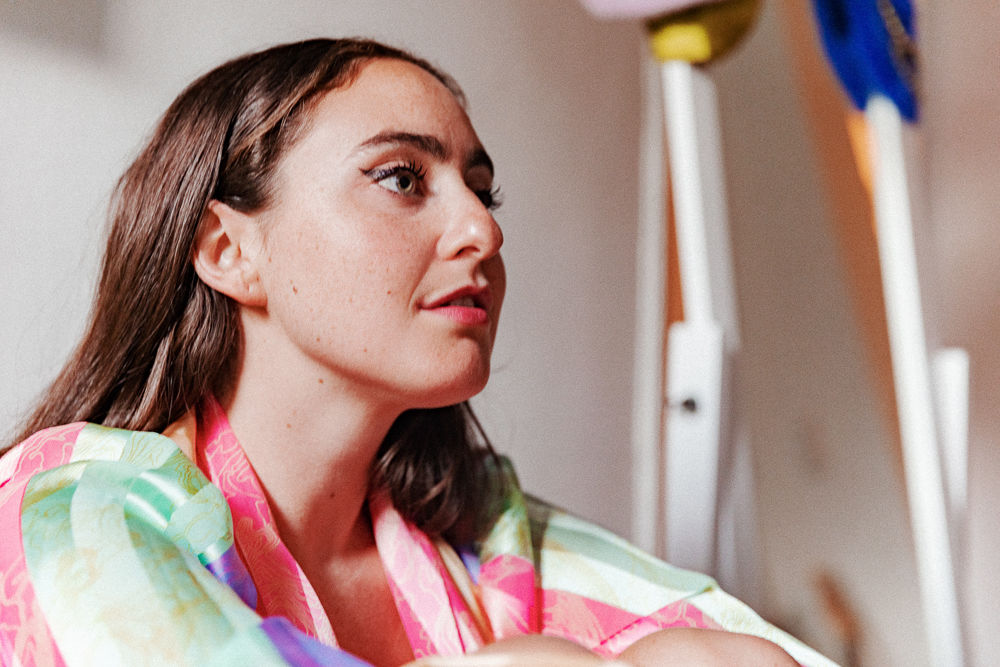 I’m here for another month, and then I’m going to do my show every night for a month at the Fringe Festival. It’s the biggest arts festival in the world, and people from all over come and do the show. I’m fucking terrified. I’m writing and auditioning in between. I feel so grateful that I’ve always had to make my own work and do my own thing, because now when I walk into an audition room I have this extra confidence. Actors can feel very powerless, just waiting for the next thing—if they want me involved that’s great, but if not, I know I’ll just keep doing my own thing. I was on High Maintenance last season, and Broad City, and I’ll be on Search Party when it comes back on.

I also have a podcast called Seek Treatment with Pat Regan. We’ve been doing it for a year, and we have a good following. It’s about boys, sex, dating, and love… we talk a lot about body image and depression and food and mental health. All the good stuff. I’m trying to kind of do it all at once. I’m a woman who wants everything, so a lot of my work is about that—wanting to fall in love a million times a day, be a movie star, look absolutely perfect, eat amazing food, go to the most exotic places... I just want absolutely everything, and I don’t want to apologize for it. 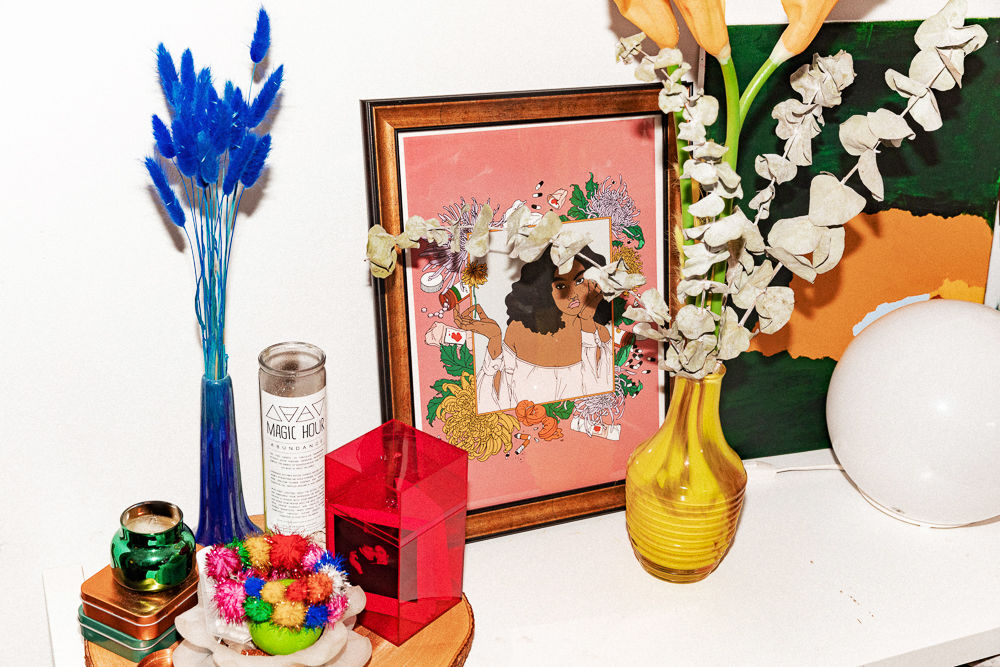 SUPPLEMENTS
I can’t get sick because I’m always traveling and singing, and I am so fucking neurotic about it that I’m unbearable to be around. So, I have my hypochondriac station. I have my Wellness Formula—obsessed. A makeup artist that I knew for 12 minutes told me to take B-12 shots, so I’ve actually been doing that. I constantly have a UTI—my vagina is broken. I am literally addicted to these Zicam zinc tablets. Oil of oregano—obsessed. I eat raw garlic and ginger if I feel any kind of tickle in my throat. I’m always drinking honey. If I have a show, I’ll inhale steam. Apple cider vin—obsessed. Xanax—we live, we laugh, we love. I get really bad migraines with visual aura because I’m an old-timey lady who needs to be by the ocean, so my migraine doctor told me to take Q-10 and magnesium. All my ailments are so vintage.

SKINCARE
I know—my skin is the one thing I absolutely have going for me. When I shower I use Cetaphil Extra Gentle Daily Scrub. My dermatologist gave me this Revision Skincare Soothing Facial Rinse, and I use that as a toner sometimes. My dermatologist also gave me a retinol but I always forget to use it. I do like moisturizing, though. I’m better about it in the winter. I use Kiehl’s Midnight Recovery Concentrate or this No. 7 moisturizer I got in London, which makes me interesting [laughs]. I try to use sunscreen because I am definitely going to get skin cancer, and I love the Supergoop Unseen Sunscreen. You feel like you’re wearing nothing—it’s so nice. I like the stick too, but I prefer the other stuff.

BODY
I literally never shave my body hair because I’m the laziest woman in America, but when I do I like to lotion afterwards. Or sometimes when I’m bored I’ll just cover my whole body in cream and lay there. This Kiehl’s Nourishing Dry Body Oil is good. My mom gave me this Soy Milk and Honey Body Polish, and I like it—I love to scrub! I prefer to use a bar soap to body wash, and I use Dove Original Clean deodorant.

HAIR + NAILS
My hair is curly. I’ll wash it once a week—my mom used to buy Paul Mitchell shampoo and conditioner, so that’s sometimes what I buy. Starting when I was 23, I used to straighten my hair nonstop. Then I spent two years trying to embrace my curls. Now I feel like I’ve accepted my curly hair, and am allowed to straighten it when I want. Usually I’ll blow dry it myself so it’s a little straighter, but I go to Drybar a lot. Like, at least twice a month. I love it, it’s so fun. It depends on the look, but in general I like a blowout with some big waves.

I really like fun, bright colors on my nails. For a while I was doing yellow nails, and now I’m really into this purple-y blue. I go wherever—literally whatever cheapy place is just there. I have mixed experiences everywhere I go. But I am obsessed with massage—there’s a place called Renew on West 8th, and it’s heaven. I go there all the time because it’s so cheap, like $40 for an hour. 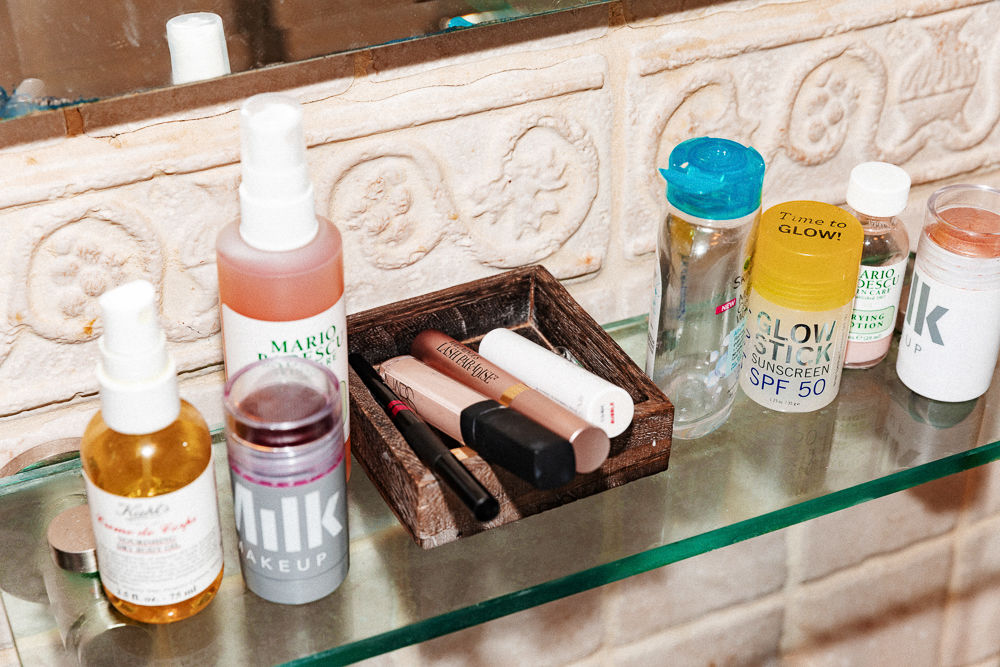 MAKEUP
When I’m performing I don’t use foundation—overall I like keeping it natural, except for the eyes. Then it’s more playful—I don’t want to look stiff, I want to look vibrant and interesting. I’ll do a little Nars Radiant Creamy Concealer under my eyes. I feel partial to Nars for some reason. I also really like Milk. I put their highlighter, Lit, on the high points of my face, and I’m obsessed with their lip and cheek thing—this shade is Quickie. I feel like it looks so perfect. My lips get colorless sometimes but this barely looks like I’m wearing anything. I put some on my cheeks, too. The Bubble Kush lip balm also gives you a little color, and it smells expensive.

Then, of course, what I feel naked without is my liquid cat-eye liner. I just picked this Maybelline Master Precise All-Day Liquid Liner up at the drugstore one day and I didn’t think the brand mattered, but then I tried a different one that was much worse. It’s super thin and very black. I really liked Too Faced mascara, but I was on set and a makeup artist said L’Oreal Voluminous Lash Paradise is the same thing, but way less money. So now that’s what I use. If I want to play around I love to do a red lip. My dear friend Stephanie Styles, who just made her Broadway debut in Kiss Me Kate, got me a tube of MAC Ruby Woo years ago. That’s my favorite—it’s the perfect blue-red. If I want a red lip and I’m performing, I’ll use Rimmel London Play With Fire. It stays on for like seven months—you have to scrape it off. Every once in a while I’ll be into a dark lip, and for that I like this Nars Audacious in Liv. 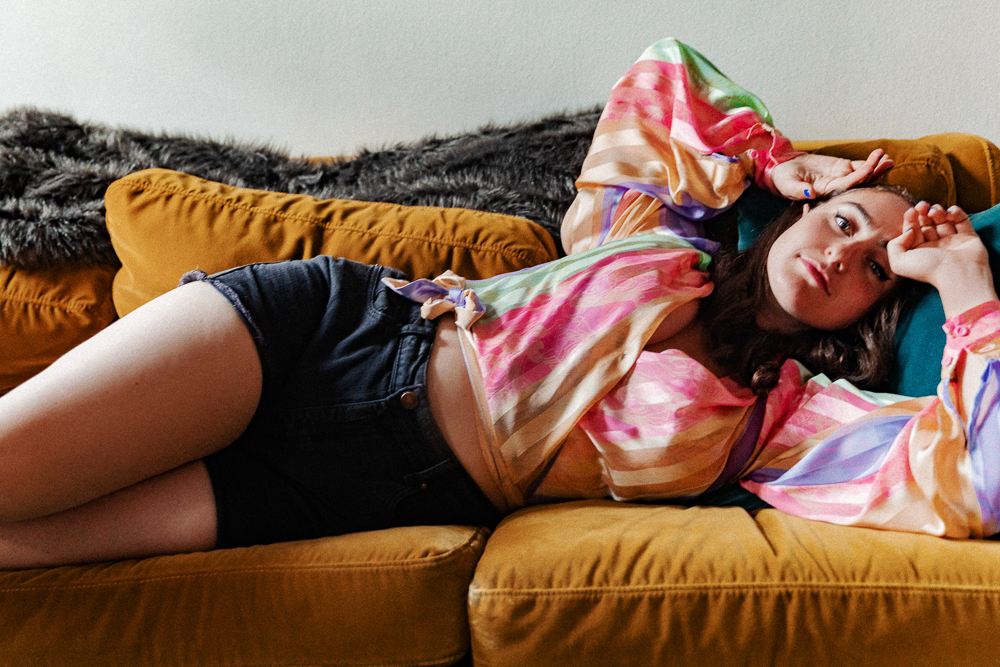 STYLE
After a show when I come out into the lobby, I want it to be obvious that I was the woman in the show. I’m very glamorous. I like anything over the top, colorful, lots of sequins, feathers. I try to wear a look every time I perform, especially if I’m doing a variety show. I have Rent The Runway unlimited, and they have a pretty good selection. I rent all this stuff that I’d never buy because it’s out of my price range. I’ve finally accepted my body and like showing it off—now I wear things I might have been scared to wear before. I love exaggerated silhouettes and bold, form-fitting stuff. I always want to look really sexy—a lot of the clothes I see in stores are so sexless. I walk into Madewell and Uniqlo and think, what is this drab, vanilla wafer hellhole?

I just want to look hot as hell because it’s powerful. An ideal pre-show ritual would be I wake up with nothing to do, and I don’t speak all day to save my voice. I like to go on a long run and sweat out my whole life and get rid of all my anxiety. Then I take a long shower, and sometimes a hot bath. Sometimes I just get in the water first and soap up after in the shower. Then I play music, get my Drybar, do my makeup. It doesn’t take me long—I’m pretty quick to get ready. I’m always out late—I’ll hang out at the venue of my own show, or the venue of my friends’ shows.

At night, I use micellar water to take off my makeup—this one is Garnier, but it doesn’t have to be. The thing is, if I told you guys how often I fall asleep with my makeup on, you’d have me shot and killed. It’s almost every night. I’ll have a show, pass out, and kind of reapply it when I get up. I have horrible habits—no one should follow my advice.”