“I come from a restaurant family. They got into the industry not because of passion, but because of the Chinese Exclusionary Act. If you were Chinese in America, you could either work in a laundromat or the restaurant industry. Isn’t it crazy? In 1948, my aunt Ruby Chow opened up a restaurant that pioneered Chinese food in Seattle. Frank Sinatra, Sydney Poitier, and Sammy Davis Jr. were all in my aunt’s restaurant, and Bruce Lee was her dishwasher. It was very glamorous. The restaurant itself was housed in a building that was a brothel in the ‘20s. I think there are a lot of similarities with what my aunt built and what we’ve been building at The Beatrice Inn. When I bought it, I had this idea of buying a piece of New York history. Fitzgerald and Hemingway drank there when it was a speakeasy in the 1920s. Then it was an Italian restaurant owned by the Cardia family for over 50 years. Mimi Sheraton, one of The New York Times’ first food critics, told me she had her first pesto there when she was a child. She’s 93. Then the Sevignys bought it, and opened up a nightclub. I was never cool enough to get in. I had to buy it to get in. [Laughs]

I’ve been cooking for almost 10 years now, but before that I lived in LA for 10 years doing commercial real estate. My family was always adamant that I didn’t go into the restaurant industry, encouraging me to go into business, or be a doctor or lawyer instead. A lot of people ask if I wish I had switched sooner, and the answer is really no. All of that experience helped me transition from being a chef to being an owner. There are so many aspects of the industry that I love. Of course there’s the eating aspect—you’ll never catch me not hungry—but what I love about the hospitality industry in general is that it brings people together. My best memories, best relationships, and best ideas have all happened around a dinner table. If those are my best experiences, and you and your friends can have that around one of our dinner tables, what greater gift can I give? There’s a lot of magic in it for me. 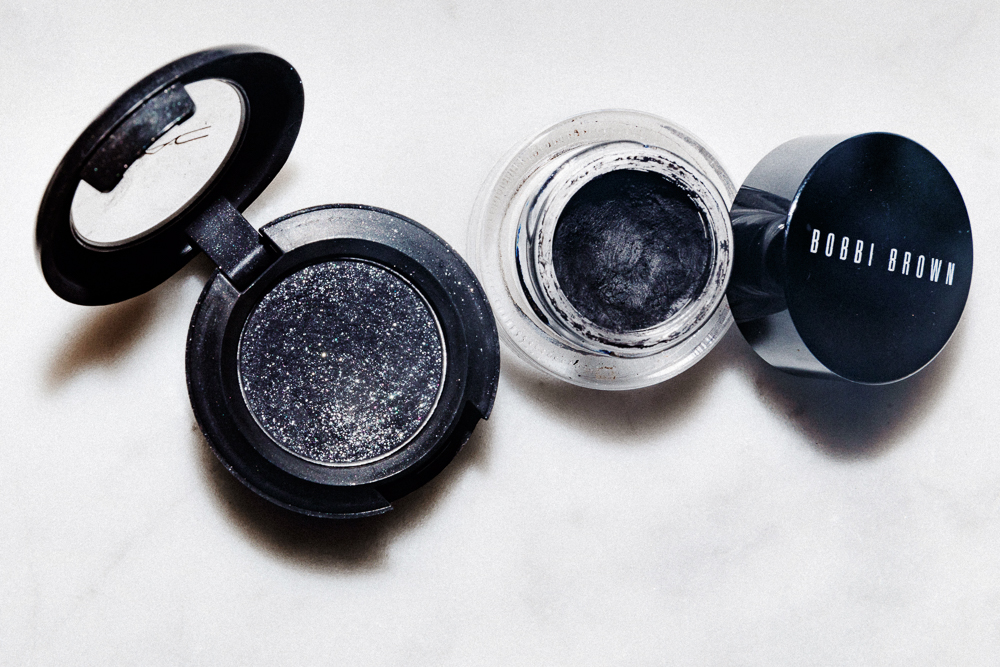 This is the same makeup and jewelry that I wear when I’m in the kitchen. I’ve probably been doing this smoky eye since I was 14. I use two shades of black—Carbon by MAC to start, and I follow it with a darker black that has a little bit of shimmer in it. I finish with Bobbi Brown gel eyeliner right on my lashline, underneath, and on the waterline. I don’t use mascara because I got extensions. I live this life where I’m sleeping four hours a day, and I need to be able to consolidate my routine. My brows are microbladed for the same reason. I went to Claire at Laurel Microblading in the East Village—I had to book six months out because she has such a cult following. I had always been really hesitant to get microbladed, but her work is so natural. I brought her photos of what my makeup always looked like, and now I don’t have to spend time on them.

When I started to do more photoshoots is when I got into cream contour sticks. I use a cream contour from Bobbi Brown on my cheekbones, and over that I use a MAC powder to stay matte. When I’m just running around, I’ll wear an oversized hoodie, white Air Force One’s, and all the diamonds, but no makeup. Just this By Terry lip balm, and definitely some amazing sunglasses.

I use the Murad Clarifying Cleanser with a Clarisonic twice a day. Everybody tells me it’s too much, but I’m in front of a lot of heat and oil in the kitchen all the time. In the morning, I use Inca Rose Collagen Serum with this Advanced Plumping Serum with Pure Botanical Hyaluronic Acid from Patyka Paris, and then follow it with the Youth Remodeling Cream from the same brand. When I’m in Paris, I go crazy and spend hundreds of euros stockpiling. I also really love the Ahava Time to Revitalize oil, especially in the summer. I used to think that when I was in the sun my skin produced more oils, but really it starts to dry out. This is one of the greatest things to bring my skin back after I’ve been outside for a long time. I also do weekly facials at Skin Laundry, which I think has really helped me maintain balance.

This is the same makeup and jewelry that I wear when I’m in the kitchen. I’ve probably been doing this smoky eye since I was 14.

To moisturize my body, I use Ahava—I am really big on moisturizing. And once a month, I go see Grace at Tribeca Spa of Tranquility for the Korean Exfoliation. It’s so good. I work with my hands, so no manicures, but I’m big on the pedicures. I either use Poor Little Rich Girl [Ed note: discontinued] or Bordeaux from Essie. There’s a really small place on the Upper West that I go to. Pedicure and a good foot massage, you can’t beat that.

The big secret to my hair is that I eat a lot of beef and beef fat—Shalom Harlow actually has the same philosophy. It’s all the collagen. So, that’s step one. Gives us a good base—everything else is extra. I’m really crazy about getting trims, so I’m at Blackstones religiously. The owner, Joey Silvestera, has done my hair for 10 years. Every three or four years he tries to convince me to dye it, but I just can’t—I’ve always had jet black hair. My hair is wavy, and it doesn’t do well in humidity. For years in the summer I’d wear it straight and blow it out, or just put it up. I found Color Wow Pop and Lock three months ago, and put it to the test when I was in Asia. The humidity there is crazy—101 degrees, 100-percent humidity. I combed it through when it was wet, blew it out, and ran an iron through it to give it waves. It kept my hair completely smooth for days. I was shocked.

I love Alterna shampoos, and I shampoo every three days. I also deep-condition once a week. What I think is really important is that I don’t use hot water on my hair. I’ll shampoo and condition using lukewarm water, and then will run ice cold water over it for five minutes. It leaves my hair super shiny, and I’ve found that it actually retains color better. 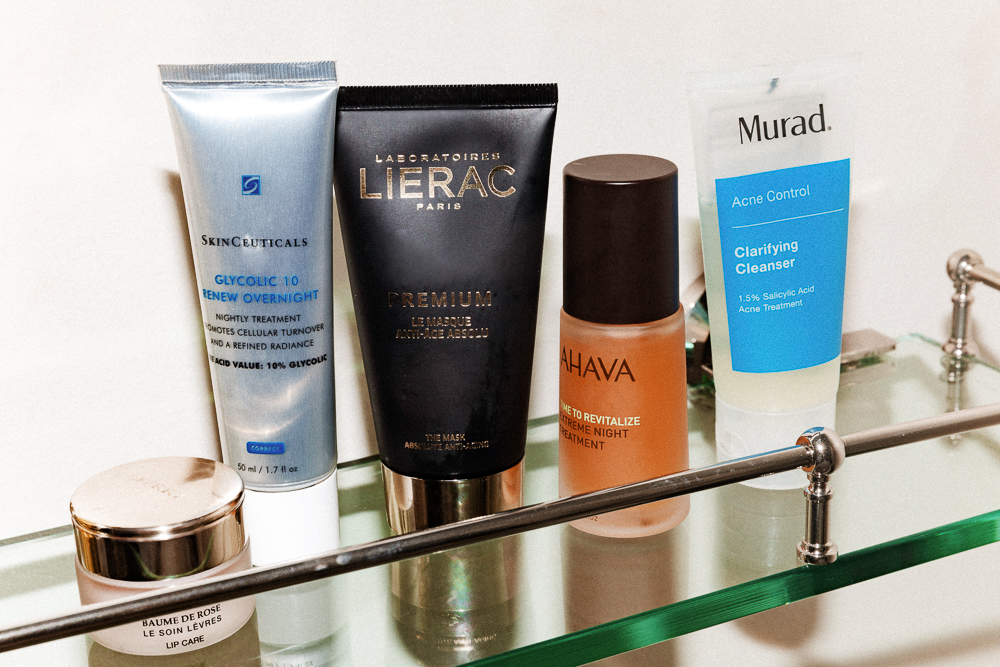 I always say that I keep an apartment on the Upper West Side, live at The Beatrice, and have a gym membership at Equinox so I have some place to shower. [Laughs] The restaurant’s closed on Sundays, so I love sitting home on a Sunday night braising oxtail and making a good pasta. The big secret is actually that I’m a little weird about going out to dinner—I only go out for sushi. The first reason is that I’m an ardent believer that I have the best meat in the city. But the second is that creatively, I’m a little scared that if I go to the newest, hottest restaurant, I’m going to be subconsciously inspired by someone else’s food. I love sushi, and I don’t cook it. Two of my go-tos for omakase are Sushi Nakazawa and Sushi Seki, but I rarely bring anyone there. It’s a very solitary pleasure for me. There is just something about coming in from a busy New York street and having somebody take control of your destiny. It’s surprising, and interesting, and refreshing. It almost allows me to forget all the things I’m thinking about, all the dishes that I’m working on, and be really immersed in the food. That’s why I love it. 9PM is normally the earliest that I’ll ever want to go for dinner, and when I’m in Paris, I do the 10PM tables. I am a complete nocturnal animal.

The big secret is actually that I’m a little weird about going out to dinner—I only go out for sushi.

I like a very long, leisurely dinner, followed by cocktails at a bar, and a couple cigarettes on a very nice walk to digest all the food that I’ve eaten. I think I must be a very old-European at heart. So when I do see my friends, we all go to cocktails. It’s interesting—when I moved to the city, I was going to cooking school full-time, working full-time, and going out every night. I don’t know how I actually did it. Going out is a lot more fun now, but it’s a function of being in the industry, and having all these amazing friends who also have restaurants and cocktail bars. I love the bar at The Grill, because it screams old-school New York in this cool, modern way. I love ZZ’s, because it’s tiny and quiet and quaint. I love Pearl Oyster Bar, because I think it has some of the best lobster rolls in the city. If you strung it all together, I’m probably just a girl that loves nostalgia. My drink is a vodka martini, dirty, and three olives, or just whisky rocks—all other times it’s champagne. I think Coco Chanel said you should drink champagne when you’re in love and when you’re not in love, and I couldn’t think of a better philosophy. For the days that I’m going out and don’t have to touch food for other people’s consumption, I either wear Chanel Mademoiselle or Gucci Envy [Ed note: discontinued]. 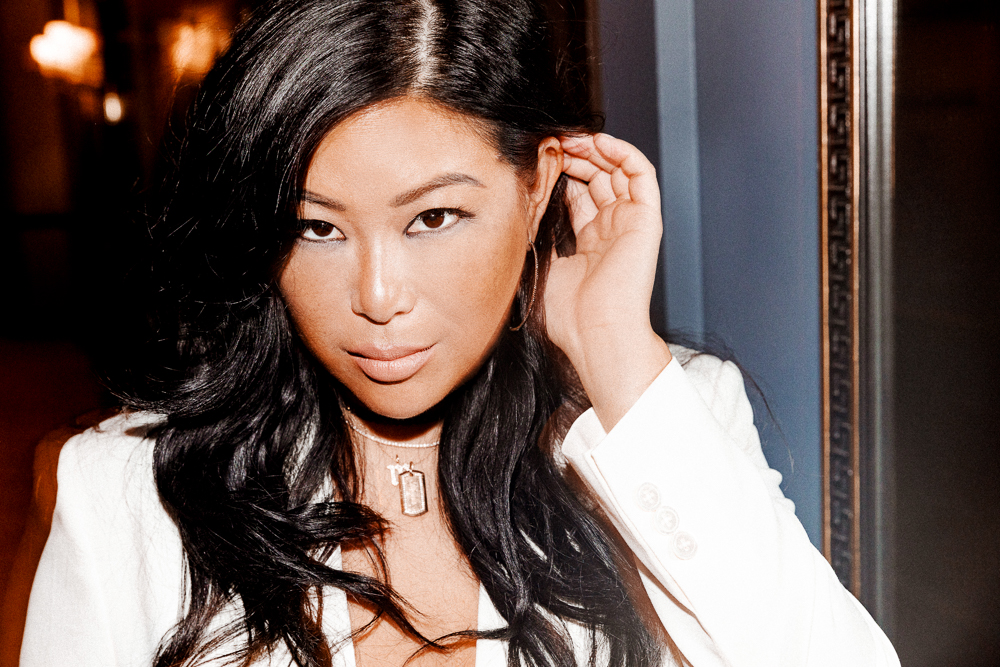 At night, I use the hyaluronic acid again, but follow it with the Inca Rose stem cells. It’s totally regenerative. When I wake up in the morning I’m glowy, my skin is completely smooth, and I look really rested no matter how much I’m not. The Lierac Premium Anti-Age mask is something I do every other other night. I start with that, and I’ll do it for 30 minutes. Then I take it off, and do the Skinceuticals Glycolic 10, which I wear overnight. Together, they give me a very youthful glow. It’s fantastic.

If you ask other chefs, it’s very typical for them to say they don’t have anything in their fridge. In my fridge I have five different types of champagne, maybe half a stick of really good French butter, and smoked tinned oysters. I’ll come home, pop a bottle of champagne, and sit on my sofa with smoked oysters and some really beautiful crackers. Maybe I’ll do the Inka Rose Gold Mask—it’s my Sunday thing.”