“When I was 18 I had no idea what I wanted to do in life. I thought maybe I wanted to be an actor, so I moved to New York to find work. But by the time I was 21 or 22 I was working as a restaurant hostess. From there I became a manager. One day the chef showed up drunk—well, back then you didn’t have chefs, you just had institutionalized cooks. He was super drunk, and he was being a dick, so I fired him. But then I had to take over being the cook. That was one of the first times that I stepped into a kitchen. I thought to myself, ‘I kind of like this.’ I did that for a while and eventually moved to a different restaurant, and from there—while in school studying psychology at Fordham—I decided that I wanted to open up my own place.

I opened up an espresso bar called The Living Room in Carroll Gardens. At that time I paid $800 a month on rent, and I only spent $2,000 getting it up. I did the floors myself, I didn’t have a cash register. And I was still going to school. I was up at 5 in the morning for a 6 o’clock opening. Then I would go to school, come back, and close the place down at around 11 at night. Only three of us worked there because that was all I could afford. That was the first time I learned that being a business owner doesn’t mean you make money, it just means you sign people’s paychecks. But I loved it—it became an addiction. The rush, the unpredictability, the instability, and the fly-by-day, fly-by-night mentality. I think it’s a constant theme in my life. There’s madness to it and I need that. 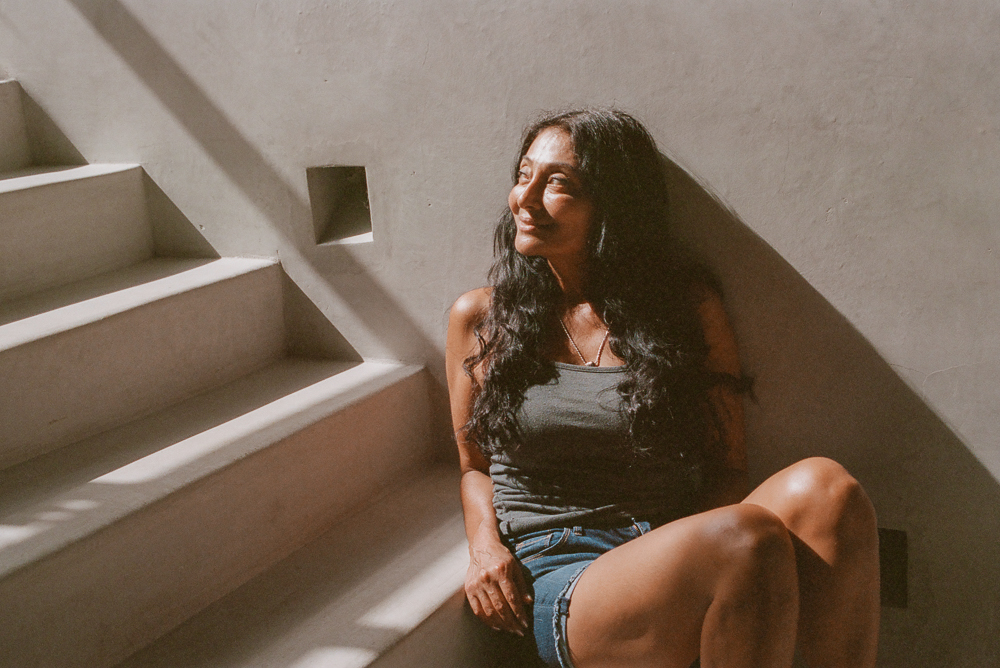 After three or four years of that I sold my baby. I had also gotten married, and divorced. I moved to LA where I’m from originally to be with family for a little bit, and then I came back to New York. That’s when I opened up my second place, The Neighborhood Kitchen, which was a cooking school. There was everything from a home chef series to kid cooking classes. It was really cool. Then the person who owned the building asked me if I wanted to take over his restaurant on Atlantic Avenue. So I straddled the two, and I opened up my second restaurant called Soju. It was pan-Asian, but after a little while I turned Soju into a gay bar called Dragon Bar. It was super fun—I was unprepared for half the stuff that happened, but I still have some of my closest friends from that. Then I opened up a high-end dive bar called Bucks Lodge. Lots of PBRs and whiskey shots—you know, when Deer Hunter was in. After that, I swore I’d never get in the business again. The glory behind it was no longer there. It was worse than any marriage I could ever think of. If you’re sick, you work. If you’re not sick, you work. If you get paid, you work. If you don't get paid, you work. It was exhausting.

But then Chopped called me. And so I went on the first episode of Chopped, and I won. They immediately called me back, and I was so stressed out that I had this big cold sore on my mouth. I didn’t win the second time around, but they called me back again anyways, for Chopped Impossible. Television became my new thing. I was on the first season of The Taste with Anthony Bourdain, and then I was on Beat Bobby Flay. Then I got called for Mission Menu. We did one season of that. 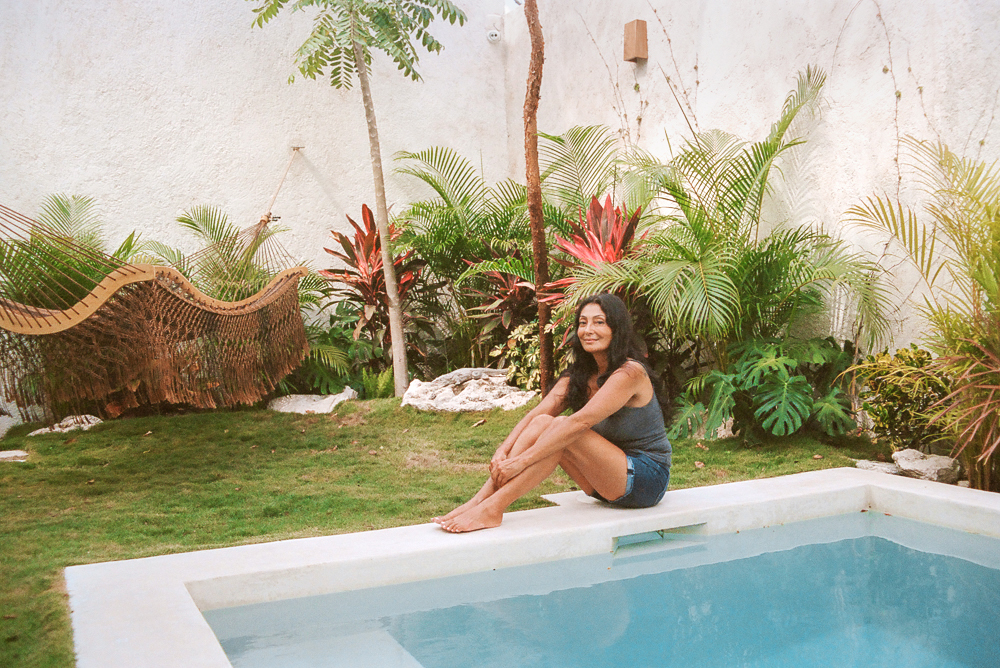 I kept pushing. I went back into the restaurant world, and I opened up a steakhouse in Fort Greene. That went well for a while, and then I finally burned out. Right after that I did real estate and became a commercial real estate broker because I knew so much about commercial leases. There was one guy who owned several big properties, and he used to call me up daily and tease me and make me cry. He would just bust my balls—but that’s how that industry is in New York. It was tough. Then I just gave up! I moved to Playa del Carmen—actually, I was going to go waitress there for the winter, but after three months I ended up staying. I sold everything I owned to make it happen—my furniture, my car, my jewelry. Since then I’ve lived in Tulum and Mexico City, working in restaurants, of course, along the way.

OK, so skincare. My mom is Korean, and I use a lot of Korean products. I love my snail slime. And I also use pig gelatin—it’s amazing. I wash my face every morning with liquid Dove hand soap, or whatever bar soap is around, either Caress or Dove. But that’s pretty much it. The ocean is very medicinal here—you just go swimming, and the salt water is very purifying. 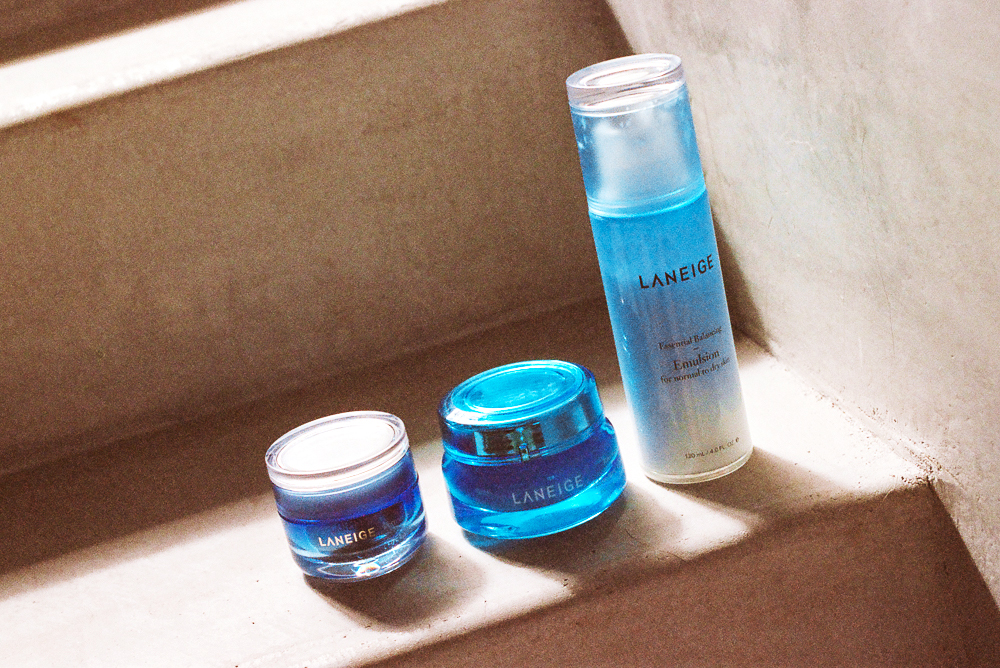 After I wash, I go with my light moisturizer, Laneige Water Bank Moisture Cream. It’s incredible. It seems like it keeps all the moisture [in my skin], and it makes my face feel like silk. Or if I don’t use that, I’ll use the Laneige Emulsion for Normal Skin. Then I use an eye cream, Laneige Perfect Renew Eye Cream, which I use at night, too. If I know I’m going to go to the gym that day, I’ll use my collagen jelly pack instead of the Laneige moisturizer. It’s pig gelatin, and it really feels like fat—it does! The collagen is super repairing. Then I use these once a week—pomegranate, honey, shea butter, and calendula masks from The Face Shop in Koreatown. When I’m in the United States, as soon as I walk out of the shower my face is completely dry. Here, it’s not the same. Everything I use is super light, and you don’t feel like your skin is being suffocated. It’s easy.

A good thing is that I don’t have to blowdry my hair here. It just doesn’t make sense to do it—you just get curly again when you walk outside. I shampoo and condition every five days with Pantene, the moisturizing line. The odd thing is that even though the weather is humid, my hair will dry out quicker. The salt water does that. So I use Pantene’s 3 Minute Miracle and just leave it in my hair. And then I use Moroccanoil Argan Oil and Shea Butter Weightless Oil. It smooths everything down. 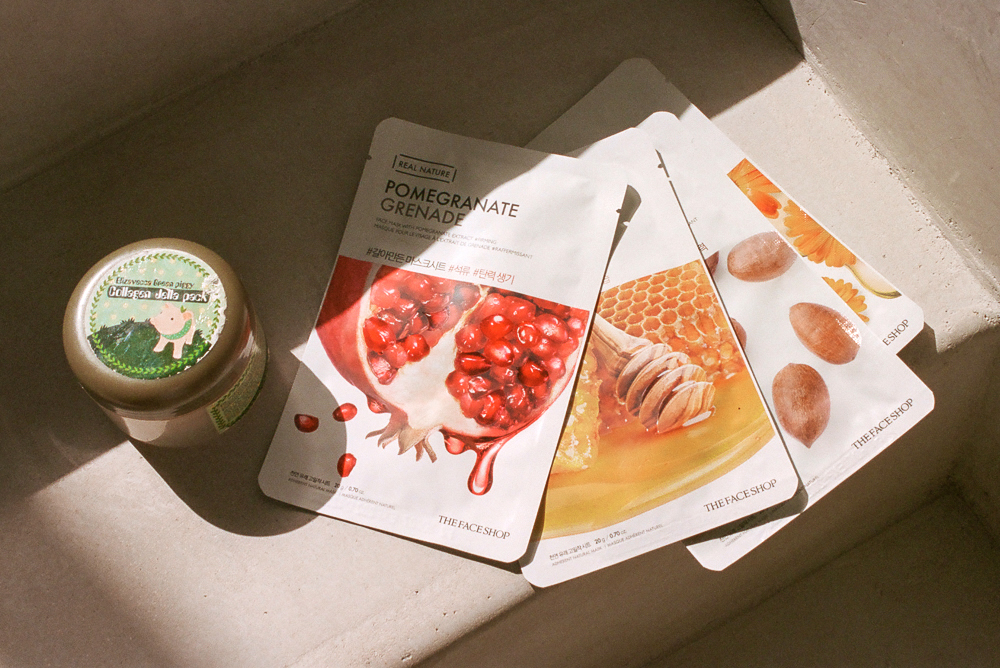 During the day I will wear just mascara, and I use the L’Oréal one in the black tube. It’s waterproof, or else it would smudge. I like it because unlike a lot of other waterproof mascaras, it doesn’t dry out my lashes. And I use an eyelash curler, too. Depending on the day, I might use an eyeliner—just a L’Oréal pencil with a smudger. If you notice, no one in Tulum really wears makeup, and it’s not often I will wear it. Liner makes me feel more put together, and I feel it accentuates my eyes a little more. It’s that little tiny extra oomph.

I get massages regularly at a place called Natalie’s in Playa del Carmen. I see this woman, Rocio, who’s been my massage therapist now for three years. I pay 600 pesos for 90 minutes. That’s like 30 bucks. It’s kind of far, but it’s worth it! She gives me the best deep-tissue, make-me-sick-to-my-stomach massage. You walk out and you’re dizzy. It's great.

Stress speeds up aging, as well as the environment, and air. Then, not eating right adds to it. And genes are a big part of that, too. I think anti-aging products can be beneficial, but they’re more preventative than ‘fixing’. Unless you’re going for a [Botox] shot, right? But, especially in New York, practicing good sleep and taking care of yourself is not an easy feat. Been there, done that. In New York, just by law, if you’re in bed for longer than five hours you’re a slacker. Here, it’s a different story. You can take time and experience great things. One thing I like to do is go to a restaurant called Arca. It’s very innovative Mexican food, but you can still go for the beer, ceviche, and fried fish. The odd thing about it is it feels like you are eating pretty healthy. You know what it is? It’s the journey—riding my bike, going to eat, and just experiencing it all. I love the tranquility, and the music.”

Diane DiMeo photographed by Tom Newton in Tulum on April 7, 2019.