“Most of my upbringing was just me doing a lot, all the time. I did gymnastics five days a week, four hours a day. I was a professional actor, I was dancing, I was singing. And I went to LaGuardia, the Fame school—it was one of the best experiences of my life. Then I got into the theater program at the University of Michigan. One year in, I thought to myself, ‘I don’t want to be here,’ but I stayed. I transferred into the film department, and I went into producing. When I graduated I thought I would go into the production business, but it was during the economy crash. There just weren’t any jobs for someone new to the industry. But I needed money, so I applied for a catering job on Craigslist. That’s how I fell into the world of food and beverage.

I liked the potential of that industry—I like food, people, culture—and I didn’t know anything at all, but it seemed much more stimulating than anything I had done before. I moved to Chicago to help break into that world. There was opportunity everywhere. Really quickly, I started working for Chef Grant Achatz, who has a three-star Michelin restaurant, Alinea. He had already opened up The Aviary, which was this cocktail mecca, and The Office, a speakeasy. And he was opening another restaurant called Next. Working with him was the first time I got to work alongside dedicated professionals. To succeed in that type of environment, you really need to buy into the whole journey. There are lots of men, and it’s hyper-militant and not welcoming. You have to prove yourself. Long hours, late nights—it’s difficult.

During that time I fell in love with champagne. I started drinking it on my days off and studied it. Eventually, I went to go work for this guy Craig Cooper at Pops for Champagne in Chicago, and he had 15 years of champagne knowledge. A huge part of understanding champagne is knowing the thought process behind the producer—that’s more important than the actual grapes, and the region where it came from. Once I knew that information, everything became much easier to understand. 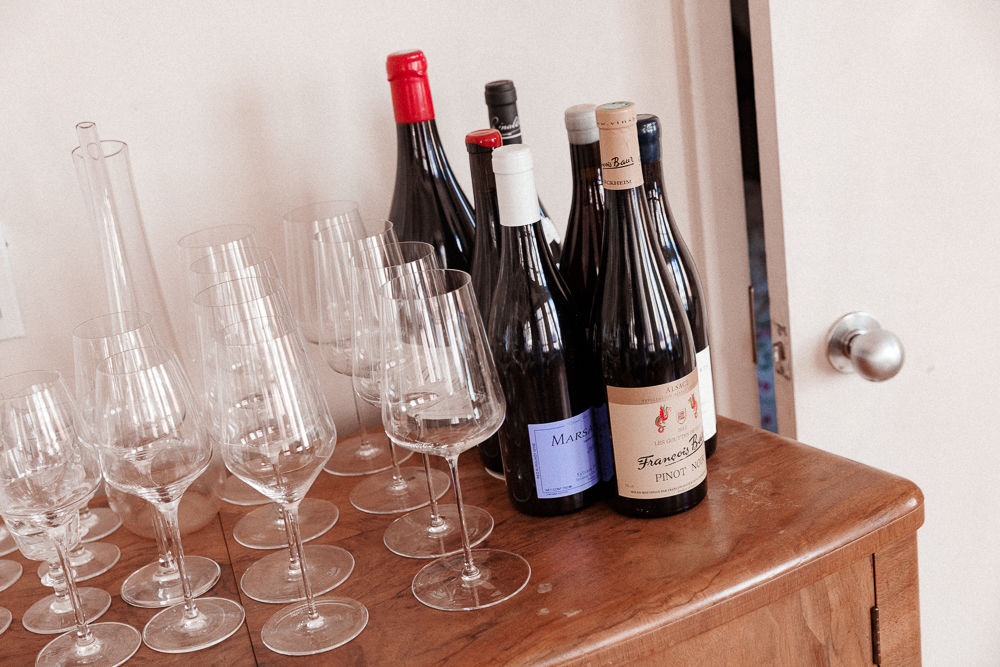 I came back to New York because I ultimately felt like the opportunities to do something with champagne in Chicago were slim. It took a little time, but four years ago I met someone who wanted to open a champagne restaurant called Birds and Bubbles, and that was kind of the beginning. After Birds and Bubbles, I went to this little hole in the wall in Greenwich Village called Riddling Widow, where I was just slinging champagne. The person who owned the space wanted to sell it, so I bought it from them and put the champagne bar—Air’s Champagne Parlor—upstairs, and Tokyo Record Bar on the floor below.

Tokyo Record Bar was the first thing I had ever done in my life that was instantly successful. People just really connected to it. When you come, you choose a song off of a list, and then a DJ collects all of the songs from the 22 guests in the room. It’s a prix fixe menu, so you just come in, relax, and listen to this fun playlist that everyone created together. It’s a unique environment unlike anything else. Seven weeks ago we opened Niche Niche, which is a wine bar-meets-dinner party. Then I'm opening Special Club, which will be an old social club and live music venue. After all of that, I will finally be doing all the things that I want to do, my way.

Right now I don’t get a lot of time to go out, but I definitely love a great restaurant. Our little pocket in Greenwich Village has so many good ones to choose from. There’s Charlie Bird, West-bourne, Morgenstern’s, Dante, Up and Up, and Carbone. I get total FOMO, so I want to go everywhere. I love, love, love, Uncle Boon’s. It will always and forever be the best. And I love going to King for lunch once a month and feel like I’m not in New York City. I still absolutely adore Maison Premiere, on a nice day. And Atla’s cocktails are amazing—they make the best tequila drinks. 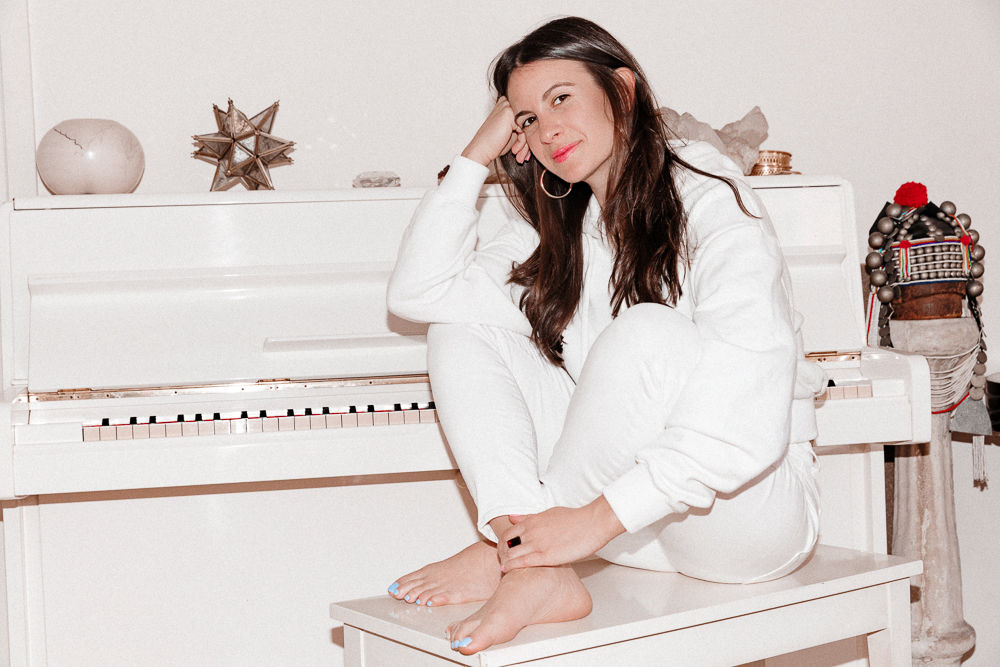 Right now, I drink every night. I’m not a big drinker—like, I don’t have a very high tolerance, so I don’t drink a lot. But I do taste [alcohol] almost every single day. I had feelings about that for a little while... When I’m not feeling good, I pull back—when I’m feeling balanced, I’m OK. I don’t think there’s anything wrong with drinking, I just think that quality over quantity is the way to go. It’s much better to spend $15 on a really good glass of champagne than spend it on two vodka sodas. My favorite champagne right now is Christophe Mignon. It’s from a small producer that focuses on the grape of Meunier. His entry level wine is very dry and bright, and fresh, and acidic, and has a lot of floral texture. Then you try his rosé, and it’s raspberry, tangerine, and it’s really juicy and delicious.

Working in this business—with the long hours—made my face break out, and if I put mascara on, it would run underneath my eyes. So I stopped wearing makeup, and my skin felt so much healthier. I got so accustomed to my appearance without it, that now when I go back and put it on, I don’t feel like myself. Once in a while I do a little something with my eyebrows. I use Chanel Perfect Brows for my brows [Ed. note: sold out, but here’s a similar one]. It’s a hard kind of powder with three different colors—black, brown, and light brown. Then I have an angle brush, Sephora Brow 20, and I use that to fill in my eyebrows.

The most that I’ll do when I go out and I want to look nice for an event is mascara, a little brow, and a soft lip. For mascara, I use Buxom—it’s clump-less. Then I use It Cosmetics’ Your Skin But Better CC Cream in Medium, and it matches my skin tone perfectly. If I’m feeling really sad, I put a little bit more underneath my eyes and under my nose—I have sensitized skin, and it can get red, so I like to kind of soften that. 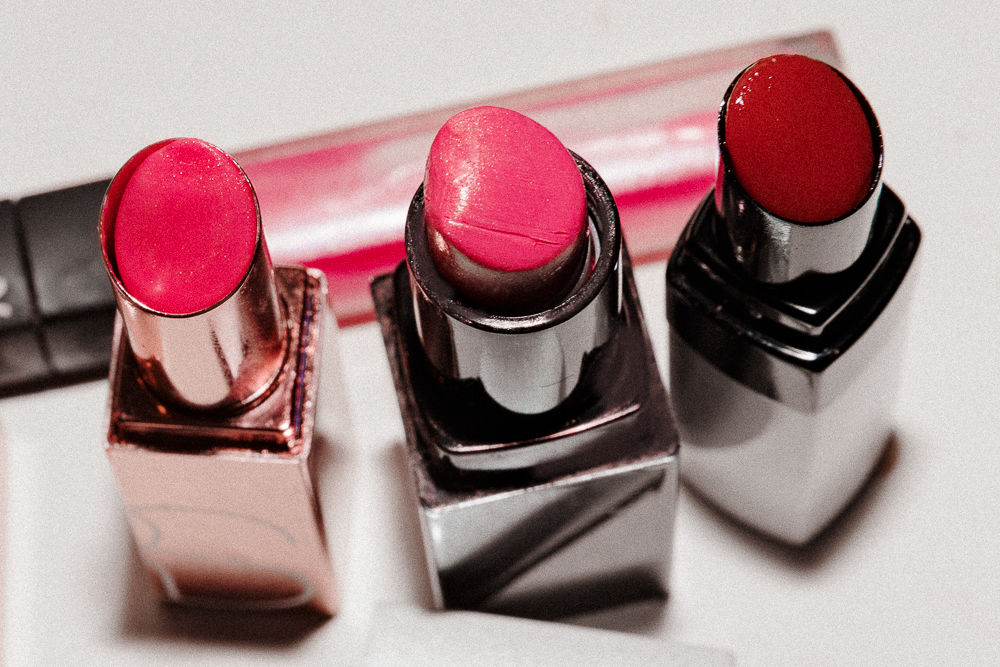 If I want some actual color, I’ll use Bobbi Brown Extra Lip Tint in Bare Raspberry. Or I have two lip colors in my bag—Laura Mercier in Tulip and Nars Orgasm—which both have a little baby pink in them. I think a red lip is gorgeous, but it makes me feel like my teeth look yellow. Honestly, my mother always used to tell me, ‘You need a lip!’ Because she was that kind of Jewish mother. But I never felt comfortable with it. Although I do like my Nars gloss in Easy Lover. It’s another baby pink, which looks natural on me. I’ve kind of figured out what my look looks like—it’s soft, and pink.

CAP Beauty changed my skin, truly. They’re the sweetest, and they actually know how to assess your skin. Two years ago they introduced me to Tata Harper’s oil cleanser, and it’s a game changer. I used to get really dry skin in the winter, and come March I would feel so dull and so sad. I don’t use it every day, and I really only use it at night, but it’s amazing. Then I started using In Fiore Calme Oil, and I also was using Vintner’s Daughter, but that’s a little heavy, now that it’s getting warmer. After I wash my face, I put on Marie Veronique’s Barrier Restore Serum. Then I’ve been into this, a face balm by Province Apothecary. You rub it on your fingers first, and then you rub that into your face. I wanted it for the winter because I didn’t think the oil was doing enough. Now I’ve kind of skipped the oil and just use the balm. And once in a blue moon, I do one of these M-61 Power Peel Pads. After a few days when my skin is feeling dull, I like to do that, and it feels really nice. 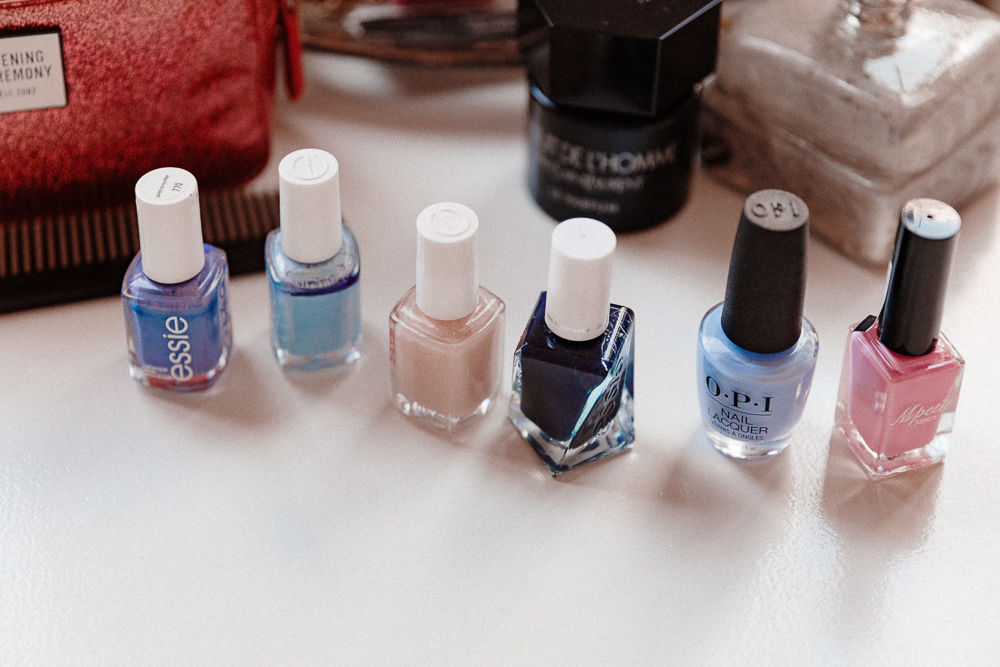 It’s really soothing for me to take a moment and paint my fingernails. My favorite colors are baby blue, baby pink—this is an OPI one, Dreams Need Clarification. For perfume, I wear Juliette Has A Gun. It smells so incredibly clean and warm. The thing that I hate about it is that I can’t smell it on myself anymore. It’s not alcohol-based, so it’s kind of intended to stick to your clothes. My mom wore Narciso Rodriguez, which is really pretty, but it’s a dense smell. If I’m in the mood for something richer, I’ll put a little of that on. And I love Philosykos from Diptyque. That scent, to me, has a nostalgic thing going on. That feels good.

When it comes to my hair, I have super duper grays coming in, but I’m into them, so I’m letting them be. I used to go to Marie Robinson [salon], and this adorable French woman would cut my hair. She gave me a great cut, but going there is not my vibe. Now a woman comes to my apartment and gives me cuts. Her name is Tovah, and she also has a side hustle as a psychic. That’s what you want from a hairdresser, right? When I’m doing my hair myself, I use this brush from CP Creative as I blow dry it with my Nano Bio Ionic. It takes 25 minutes, which is fine, but it’s time that I don’t have. So usually I’ll just let it go, and use some Kérastase Thermique heat protectant. It’s great, it’s wild, it’s all over the place, and I just don’t care. It keeps the frizziness at bay, and helps the texture a little bit. Halfway through the day I’ll put in some Humidity Shield from Living Proof. It just gives you shine, and reduces any frizz that’s creeping up. I used to be so into products, but as I've gotten older, I’ve shed them and kept focus on the few things that really work for me. 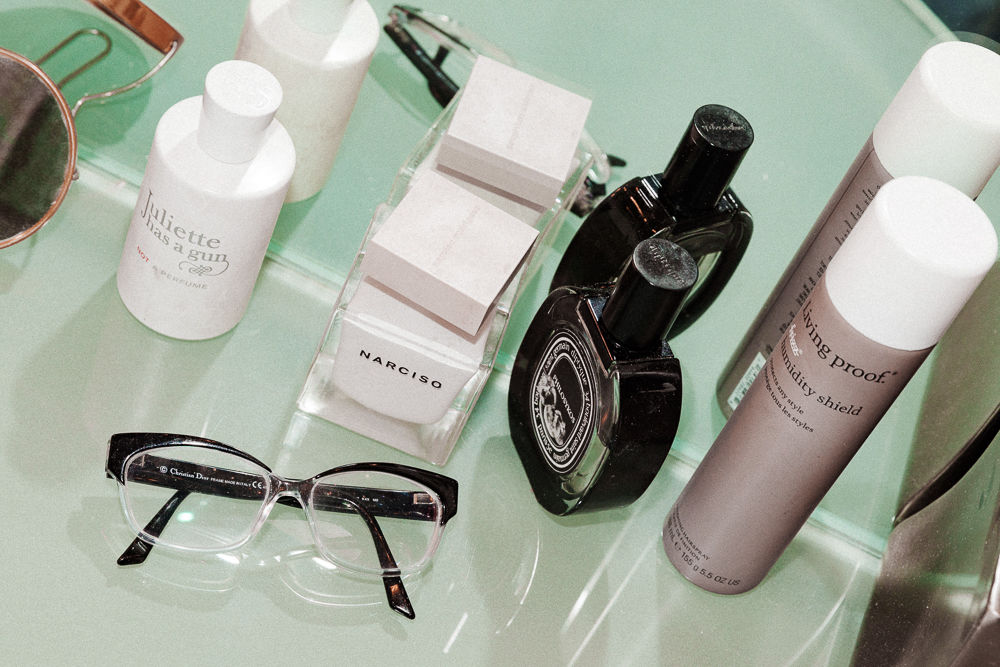 When I come home after work, I take off all of my clothes in my foyer, fill a thin glass with cold water, and put it next to my bed. I put on Brooklyn 99, and I pass out. And you know what? It works for me. When I get a hangover—and I do get hangovers—I cancel every meeting and stay in my bed all day, and I order a hamburger or a whole pizza at around 5PM. I’ll binge watch TV, and suck down a bunch of Tylenol. I’m sorry—there is no magic pill for a hangover. You just have to suffer through the poor decisions you made the night before, and hope that it was worth it. But also, if you find that magic pill, let me know.”