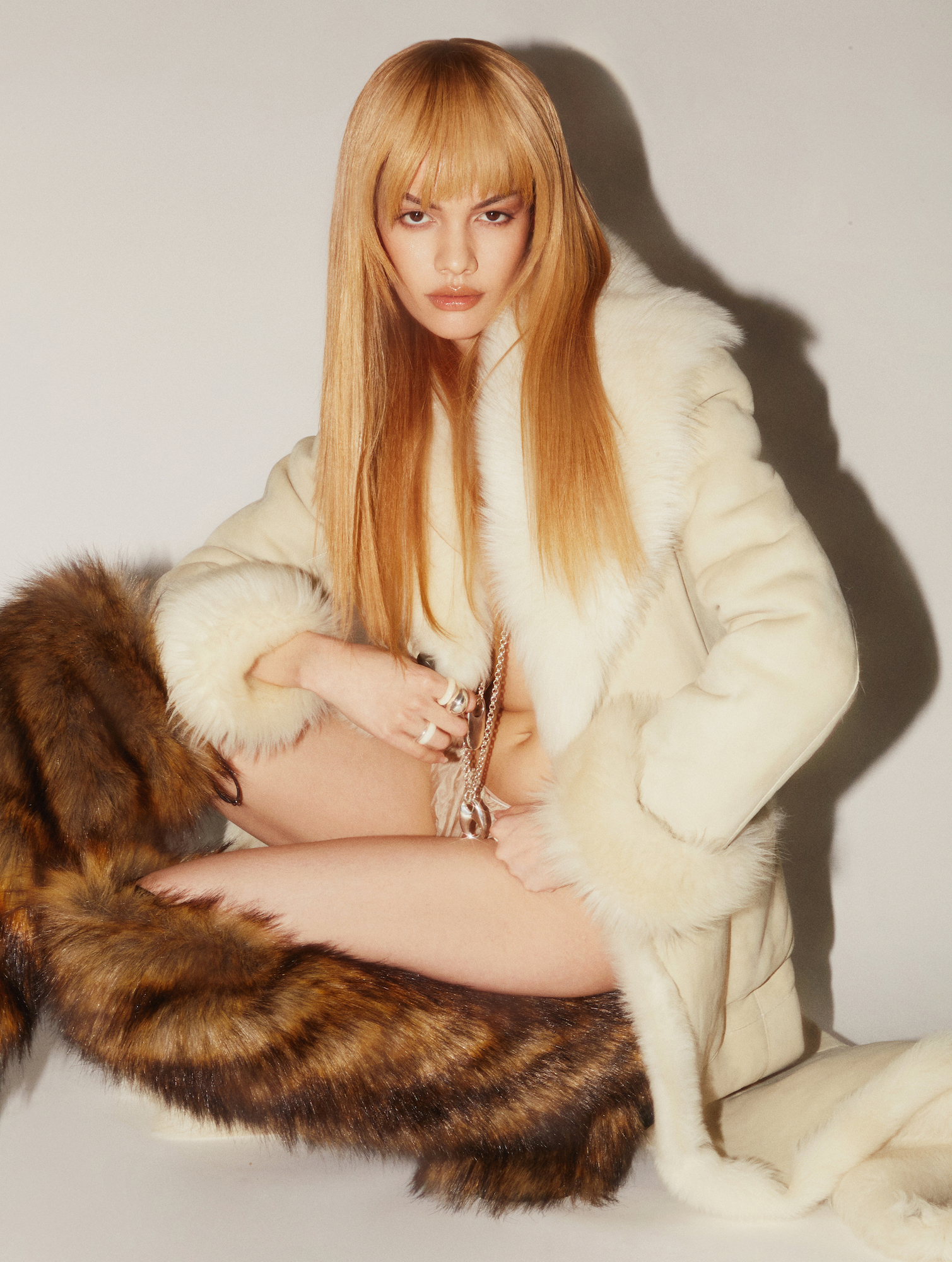 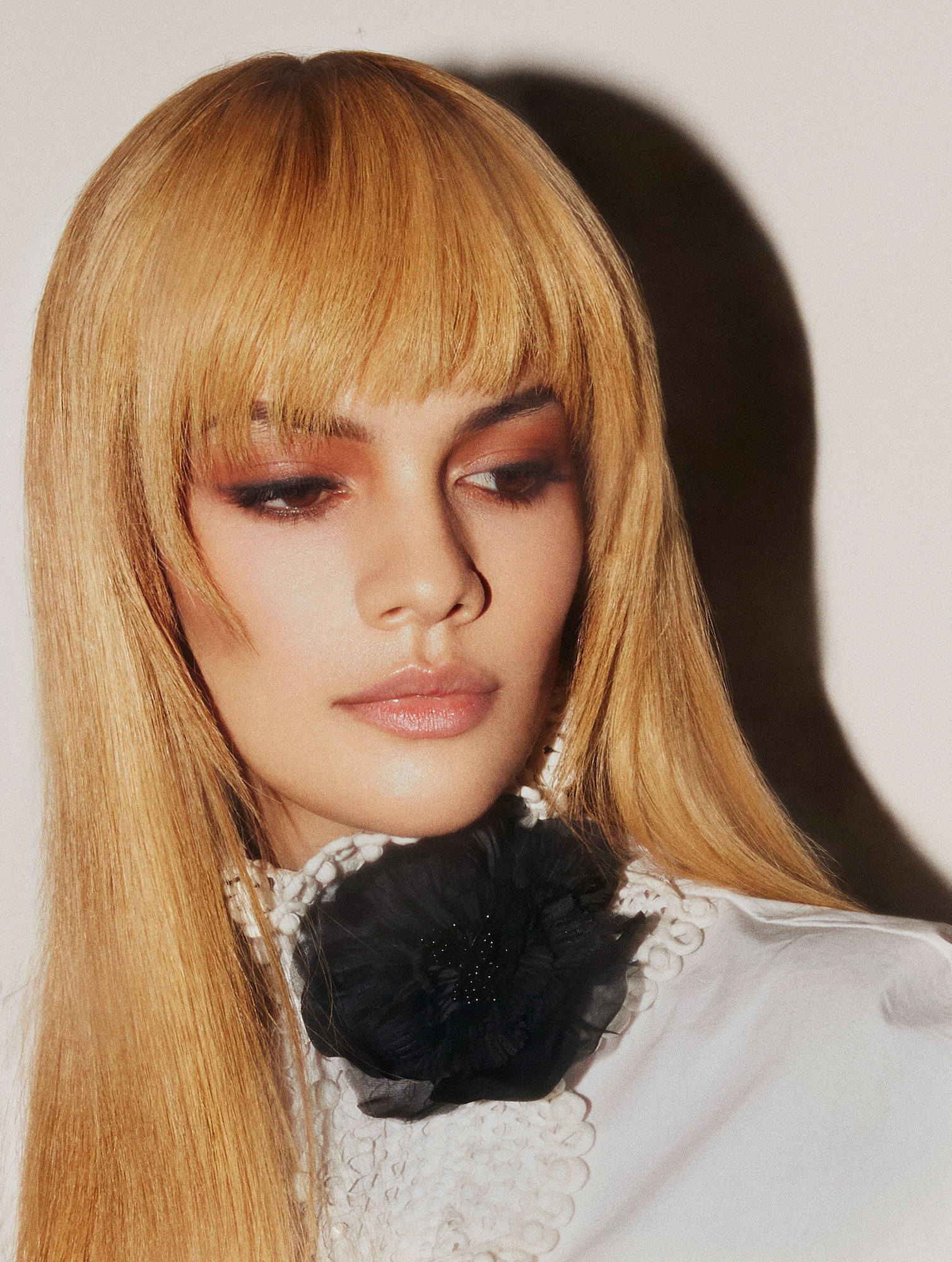 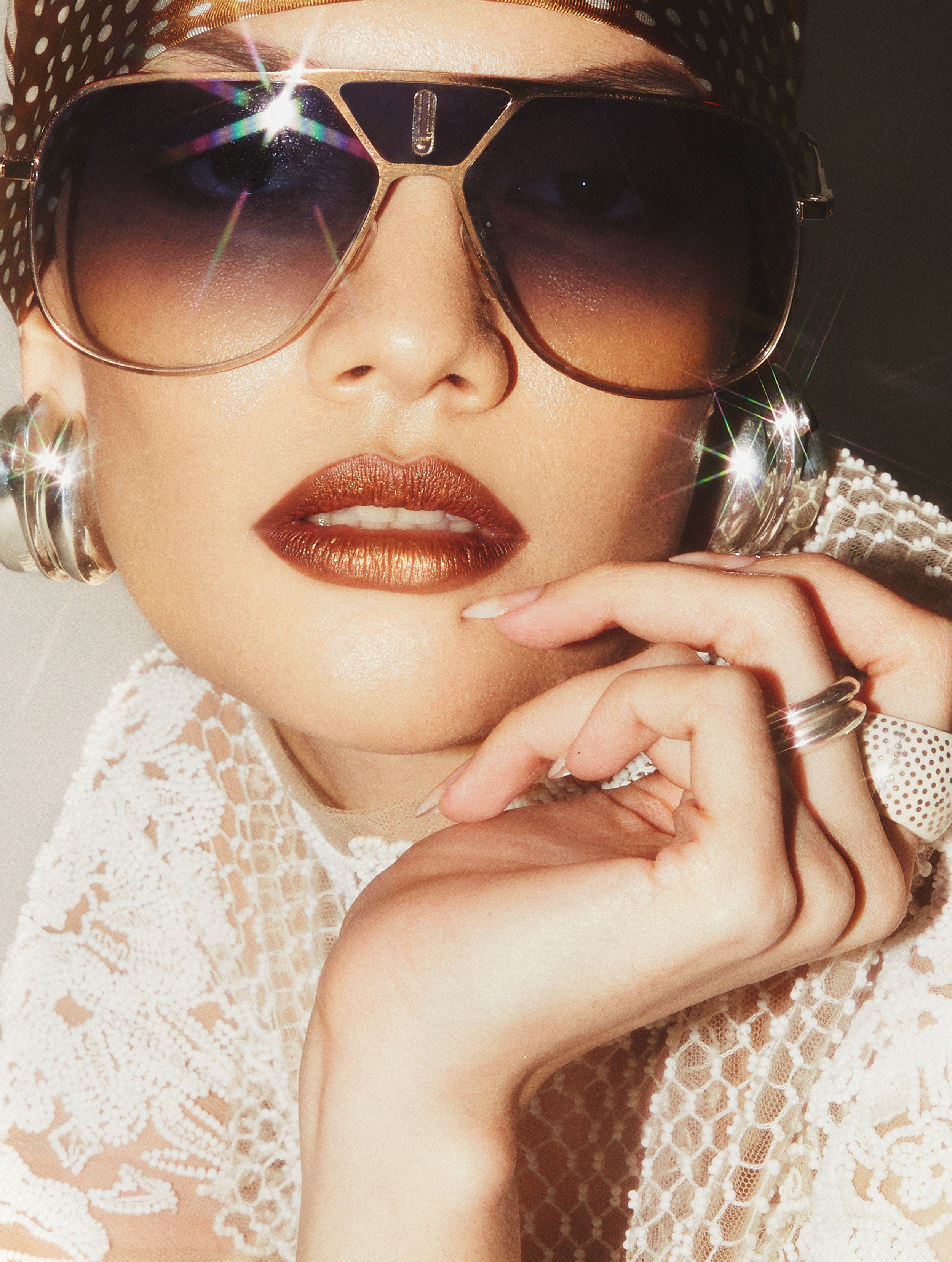 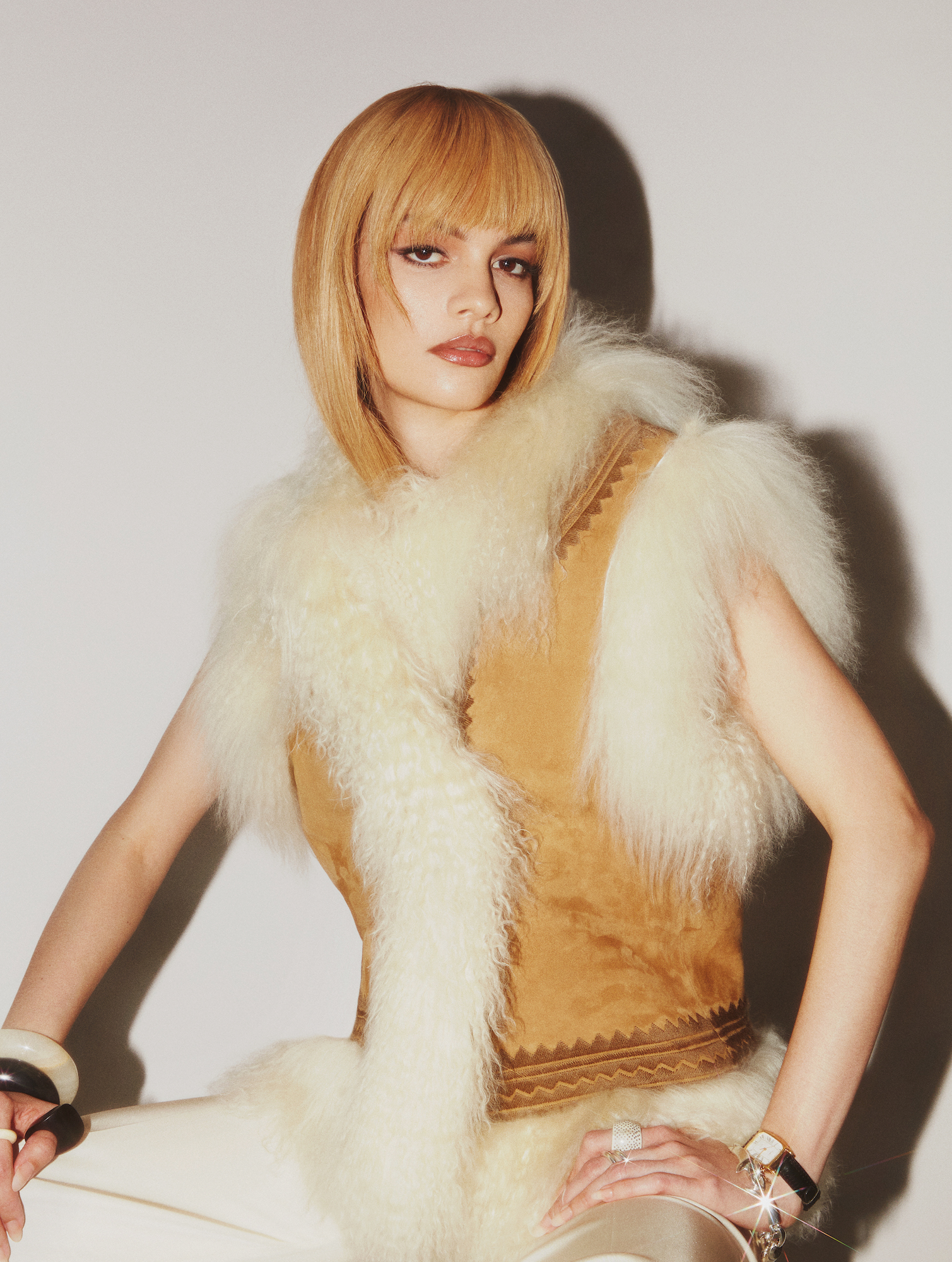 A sort of funny fact: during economic uncertainty, people tend to wear the color brown. Practical, accessible, and achievable with cheap pigments, brown is the color wheel’s version of comfort food. (It’s also, quite literally, the color of comfort food.) In Ancient Rome, poor citizens were referred to as “pullati,” or “those dressed in brown.” In 4th century England, farmers were required by law to identify their plebeian selves by wearing brown. Monks wore brown to show modesty; the color surged post WWI and again in the ‘70s, the era of stagflation. And during the early 2000s Great Recession, there was even a rumor going around that Hermès would replace their signature orange shopping bags with nondescript brown ones for shoppers who asked. Guess what? Post-pandemic, brown’s trending again!

“Everyone kind of assumes that neutral means natural,” said makeup artist Shayna Goldberg, “But that’s certainly not the case!” When ITG tasked Shayna and her creative team with interpreting the color for an editorial, she admitted, “I had full glamour in mind.” Shayna’s goal? To demonstrate the neutral tone in a way that felt wearable, but still indulgent. Paired with over-the-top tonal outfits, one thing became very clear: you can think of brown as nothing fancy. But it can just as easily be rich, and sumptuous. And maybe that little perception shift makes all the difference. Below, five takes on this fall’s brown bent.

Shayna started by prepping Mavaro’s complexion with Charlotte Tilbury Light Wonder foundation and Dior Forever Skin Corrector as needed. She also used the concealer to subtly carve out Mavaro’s brows, and defined them further with Glossier Brow Flick (to fill in any holes) and Anastasia Beverly Hills Brow Wiz (to add dimension). Georgio Armani Neo Nude Melting Color Balm Cheek and Eyes in 20, a really sheer taupe, got buffed onto the cheeks and across the lids. No mascara—said Shayna, “I love skipping mascara.” And for a healthy glow, Shayna swiped Westman Atelier’s highlighter stick in Brûlée across her cheekbones. It looks bronze in the tube, but shows up super glassy and bright under a flash. A light dusting of Hourglass setting powder kept the creamy glow in place. “It still looks light and bare, but everything has been touched and enhanced.”

To build on this no-makeup makeup look, Shayna first wanted to add a bold, glossy cocoa lip. She used Foxy Brown liner by Charlotte Tilbury to precisely define Mavaro’s lips, then filled them in with Makeup by Mario Ultra Suede Lipstick in Nicole. Finally, Shayna applied Glossier Lip Gloss in Clear (“my very favorite”) on top. Don’t want to ruin your doe-foot? “I put some gloss onto my hand first, and use the tip of my finger to press it into the center of the lips.” Less is more.

Mavaro also wears a mohair helmet from Miu Miu; her hat is the stylist’s own.

While the first look was committed to lips, for this one, Shayna put just a little bit of something everywhere. “Here I used the Neo Nude Balm again, just a bit heavier and one shade darker,” Shayna explained. She burnished 21, a deeper taupe, into Mavaro’s eyes, lips, and cheeks. Up top, she created a subtle powder smoke on Mavaro’s lower lash line and in her crease with Westman Atelier’s new Soleil Riche Butter Bronzer. And on her lips, she used a sheer coat of Charlotte Tilbury’s Iconic Nude lip liner punched up with clear gloss.

How to turn the glam dial up a notch? Just take a cue from the 80s, with defined cheekbones and a shimmery, frosty lip. Shayna carved out Mavaro’s bone structure further with Nars Soft Matte Concealer and Chanel’s powder blush in Brun Rouge 604, which she used as a contour product in the hollows of her cheeks, and not as a blush. Next, she lined her lips with MAC lip liner in Chestnut and filled them in with Victoria Beckham’s super creamy Posh lipstick in Fringe. To finish the look, Shayna pulled out Glossier’s Monochromes palette in Teak. “When I worked at MAC we would always use shimmer eyeshadow on the lips—it looks like a frost lipstick, but because it’s powder it sets it so it stays all night.” Using a finger, Shayna dabbed the metallic shadow right in the center and patted it out to blend, conceding, “It looks like frost lipstick is coming back.”

With the quick swipe of a micellar water-ed cotton pad, Mavaro goes from 80s glam to 90s cool. Shayna leaned into Victoria Beckham’s #6 liner by leaving the rest of the lips bare, save for some high-shine clear gloss. She lined Mavaro’s top lash line with Hourglass Voyeur, an inky liquid liner pen, and then turned it into a soft smoky eye. Here’s how: right after drawing on the line she quickly smudged it out, and then used a brush packed with the matte Teak shadow to soften the black edge. While she kept the bottom lash line bare, she did build up MAC 3D Dimension mascara on both the top and bottom lashes, which adds definition without extra shadow.

Mavaro also wears an archival Yves Saint Laurent shirt courtesy of Albright Fashion Library underneath a Gucci jacket, with a white tie that’s the stylist’s own. Her flower corsage is from M&S Schmalberg. In another styling for the same look, Daniel paired a Nili Lotan vest with archival Chloe pants, courtesy of Albright Fashion Library. Jewelry from Patricia Von Musulin and the stylist’s own watch complete the look.

For her final trick, Shayna makes Mavaro’s brown smoky eye even deeper and richer, emphasizing the warm ruby tones in the browns she’s already applied. First, she enhanced the black liner on top with Victoria Beckham’s black kajal and lined the waterline with MAC Costa Riche. “Sunnies Face has these eye crayons that read kind of red, and I used Earth under her eyes to diffuse the waterline color,” said Shayna. She added more Teak shadow, but also buffed in Armani’s Neo Nude Melting Color Balm (in shade 45, a rich brick, this time) into the lid as well to enhance it. Finally, after removing Mavaro’s lip liner, Shayna dabbed on a little Pillow Talk just to bring them back to a neutral pink. Ready for a night of dancing and drinking, sans smudges.

Mavaro’s shirt is Valentino, and her black floral corsage is from M&S Schmalberg.