“I think I was five years old when I first said that I was going to be an actress. My dad and I always watched movies growing up—Roman Holiday, High Society, To Catch A Thief—and there was something about his admiration of those films that made me want to be a part of that. But a manager who wanted to represent me in high school told me I needed to lose 15 pounds. I enjoyed cheeseburgers too much to do that, and besides, education was also really important in my family, and by that point I thought I had to go down a more normal route in life. So I went to Penn for college and studied romance languages—Portuguese, Italian, Spanish, and French.

CAREER
My senior year of college consisted of a lot of job interviews—I interviewed with BCG [Boston Consulting Group], Macy's management program, and the one I got the furthest down the line with was the accelerated management program for AB INBev, which is Anheuser-Busch. I made it to the final interview round, which was a group interview with five candidates and five top guys in the company. I had mentioned I liked acting, and then one of the interviewers said, 'How do we know you're not acting right now? I don't think you belong making beer with a bunch of guys.' Verbatim he said that to me. I had told myself that if I didn't get that job, I was going to go to acting school. So I started applying after they didn’t hire me, and I ended up going to the Atlantic in New York. 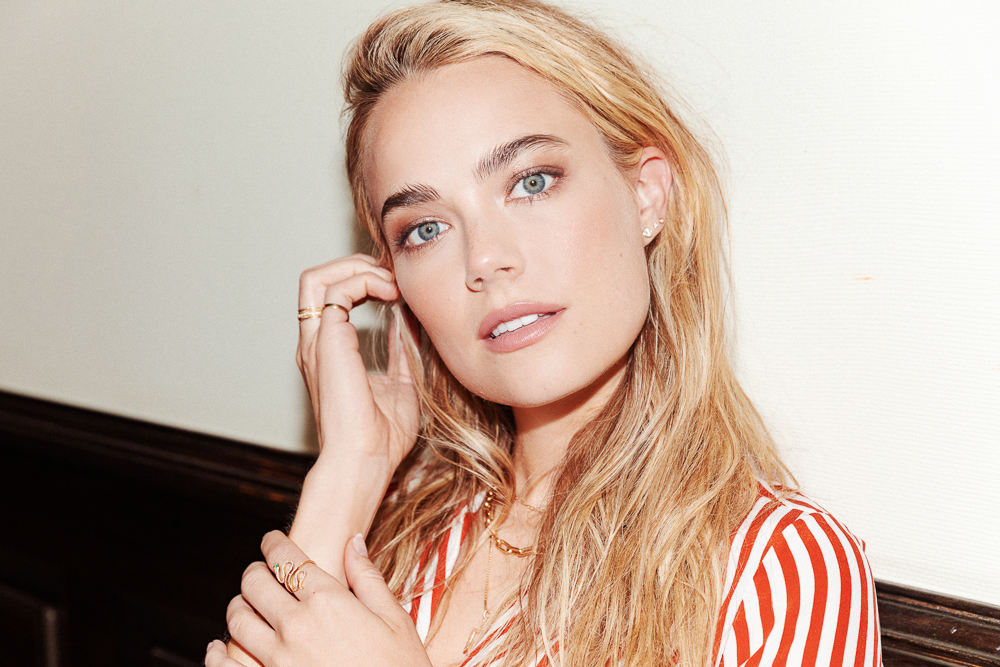 After two years of acting school, I got an agent and booked my first job—a two-minute thing on the pilot episode of The Affair. The other job I got at the same time was as an understudy for an Amanda Peet play called The Commons of Pensacola. It was a very different experience being an understudy—not something I'd ever do again—but really valuable, especially because I got to work in close proximity to Sarah Jessica Parker and Blythe Danner.

I moved to Atlanta for Red Band Society, moved to Utah for Blood and Oil, and then I started working on The Mindy Project. The Mindy Project was when I started to feel I was getting into a groove. I didn't expect to be there for long—I thought I’d be on for three episodes, and then it ended up being more. I love comedy because I find it to be a very challenging experience. On The Mindy Project I played a really frigid WASP, and I had an ice blonde bob that was very straight. On Four Weddings and a Funeral, my character Ainsley was very extra. She was always wearing something—like, she’d be at home in pajamas, a headscarf, a silk robe, and fabulous slippers. Every single day was something different. We played with a lot of color, electric blue eyeliner, bright lips. I never really thought about using that much color on my eyes before the show, but I was totally inspired and now I do it all the time.

I had mentioned I liked acting, and then one of the interviewers said, 'How do we know you're not acting right now? I don't think you belong making beer with a bunch of guys.' Verbatim he said that to me.

HAIR
I get my hair colored by Brittany King at Mare in LA. She's wonderful, but she just moved to London for a year. Alex Polillo, who owns Mare, cuts my hair. Now that it's long, I get it cut two to three times a year—when it was short I had to cut it all the time. My hair got destroyed when I dyed it red a few years ago, and now that it's back to its healthiness, I try not to put too much heat on it. I like this shampoo and conditioner called Inphenom—that's my favorite for sure. I think it's Japanese. I usually do coconut oil as a hair mask. I let it air dry a lot. I like the Oribe Apres Beach Wave spray and the Dry Texturizing Spray. I like It's a 10 Miracle Leave-In—it gives it moisture. For styling, I use a 1-inch wand and curl it, or I do a different type of wave with my straightener, which is more of a mermaid wave. Alex taught me how to do it with a straightener, which is like the easiest thing because you can do sections and it looks undone and cool and easy.

SKINCARE
I always wash my face twice a day, every day. I like Bioderma the best when it comes to removing my makeup, and I like Glossier’s Milky Jelly in the morning because it’s really gentle, or sometimes I use Fresh’s Soy Cleanser. If I've just worked out, I like a soapier cleanser, like a Clinique. I always do some type of Joanna Vargas serum afterwards. At nighttime I tend to use an oilier one—the Daily Serum, Rescue Serum, Supernova Retinol Serum—or the Rejuvenating Serum, which I love. It's basically essential oils. I don't use retinol that often, maybe a couple times a week, because I don't want to make my skin turn over too much because I'm generally happy with the texture. 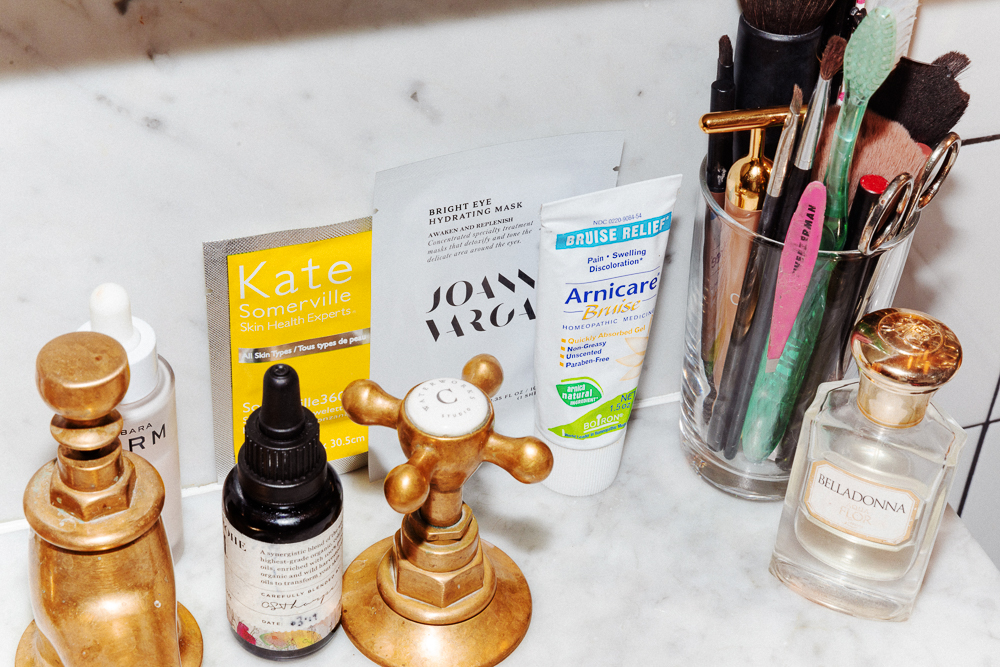 Then I moisturize—I really like the Glossier Priming Moisturizer Rich. I wear a lot of sunblock—like reapply every 80 minutes type of thing. Love the Glossier Invisible Shield. My favorite for body is Hawaiian Tropic, but I have to stop using it because my friend told me it was toxic and not reef-safe. It’s hard because the smell is really nostalgic to me. But Avene, Coola, and Elta MD all have really nice sunblocks.

The best zit cream I've ever used is Grown Alchemist’s Blemish Treatment Gel. I bought it when I was going to a wedding in Canada, and I was so angry about it being so expensive, but then it worked so well! I’m also obsessed with the Vanderohe serum, which is an oil serum. It's totally natural and the smell of it is amazing. The idea is that you put it in your hands first and smell it, sort of like aromatherapy, and then you put it on. It's lovely, I take it on the plane with me. And speaking of planes, I put Jet Lag on thick when I fly—I’m obsessed with it. 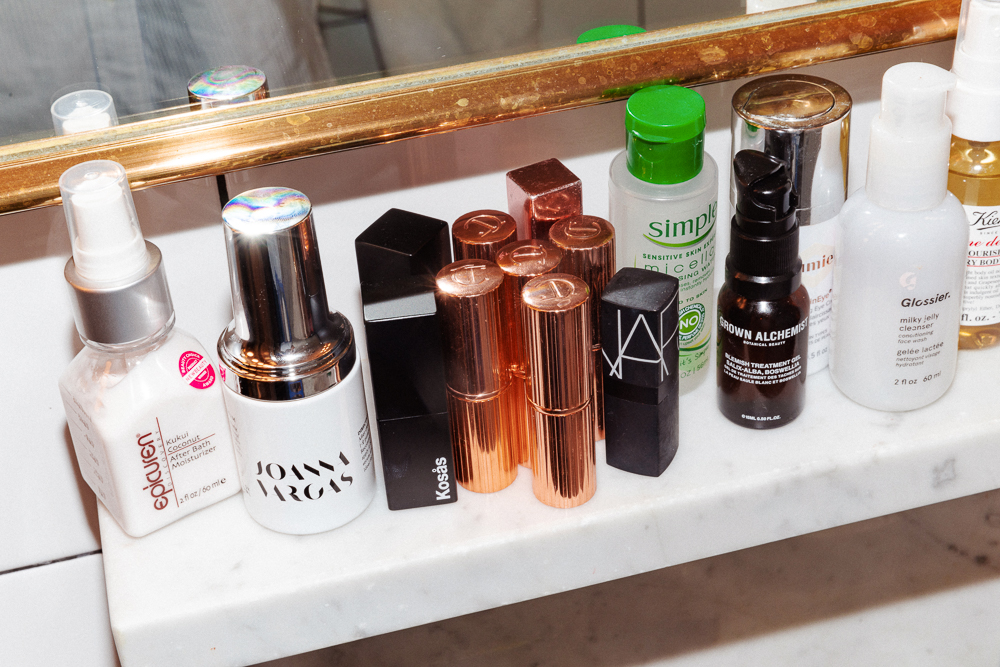 AluminEye cream is amazing—instant brightness and fewer fine lines. The annoying thing is that it’s hard to buy—you have to go through a professional or something. I bought it from facialist Lisa Franklin when I was in London. I have Jillian Dempsey’s Gold Sculpting Bar, which is something I use after I’ve put on all my lotions and concoctions. It's plated in gold, so you can't use it when you're wearing makeup because the makeup dissolves the gold. Maybe it's a gimmick, but I feel it gets rid of any sort of puffiness, and it also gets the blood flowing to your face. When you have a lot of early mornings as an actor, it helps.

I got to Cynthia Franco in West Hollywood for facials. She turned me on to this line called EMK, which has this gel called Beam Eye and it really brightens and depuffs—I use it all the time on sets at like 5 in the morning to wake my face up. Cynthia does LED light therapy, peels, and microcurrent. I'll bring my dog, and he’ll sit on top of me while I'm getting a facial. He's actually not that small—he's 18 pounds, but if I'm on top the table then he needs to be on top of me.

MAKEUP
Makeup starts with Unseen Sunscreen—it’s a really good base. Then Giorgio Armani’s Luminous Silk Foundation. I used to wear Smashbox BB Water, and I loved it because it was so light, but they discontinued it. Now I mix two of the Giorgio Armani colors, along with a Nars highlighter. I buff it into my skin with a flat brush, and it makes this really nice, glowy look. Then I have Glossier Cloud Paint in every color. 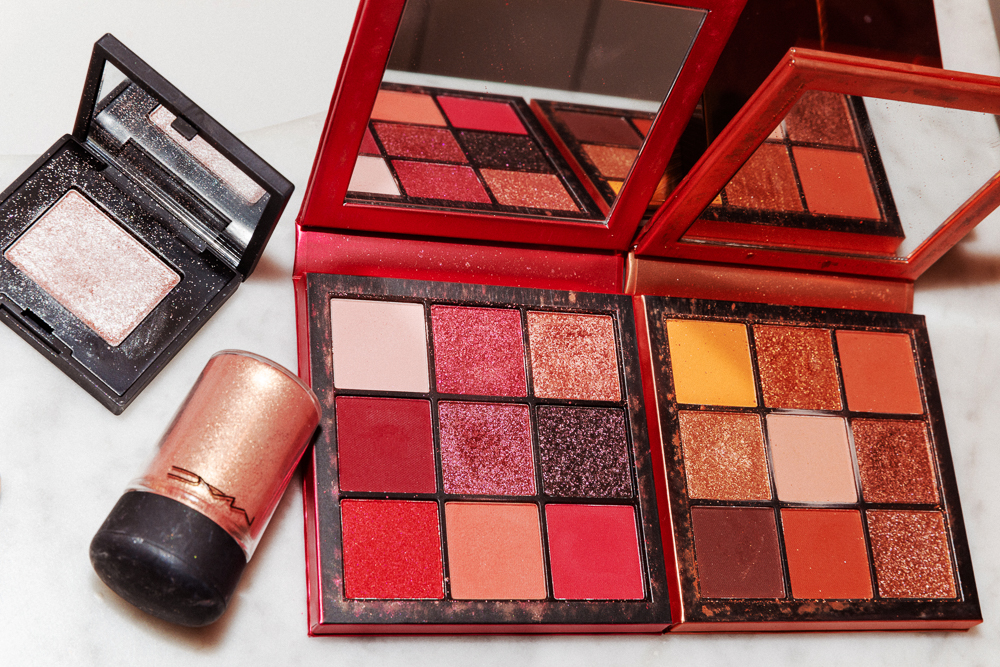 For the daytime, I usually do Lash Slick mascara and Lidstar in Cub. Cub is the best—it gives you something without overdoing it. My favorite nighttime mascara is Buxom, and then Climax from Nars. The Nars is if I want a big chunky eyelash, and the Buxom makes them really long, but separates them. Eyebrows—I don't pluck them, except for my unibrow. I comb them straight up, and set with Surratt pomade. It's white, so you can't overbuild with it, and then I fill in the ends with a MAC pencil. And because of Four Weddings and a Funeral, I love fun eyeshadows now. The Huda palettes, and then Earthshine from Nars.

A thing I have to deal with are big dark undereye circles. My secret weapon is Becca’s Under Eye Breaking Corrector—if you have dark circles, this is the jam. That and Laura Mercier’s Secret Brightening Powder for undereyes. Magic. I noticed if I don't have coffee or chocolate, the dark circles tend to get lighter, but I can't live without coffee or chocolate, so I'll just use the Becca and the brightening powder. 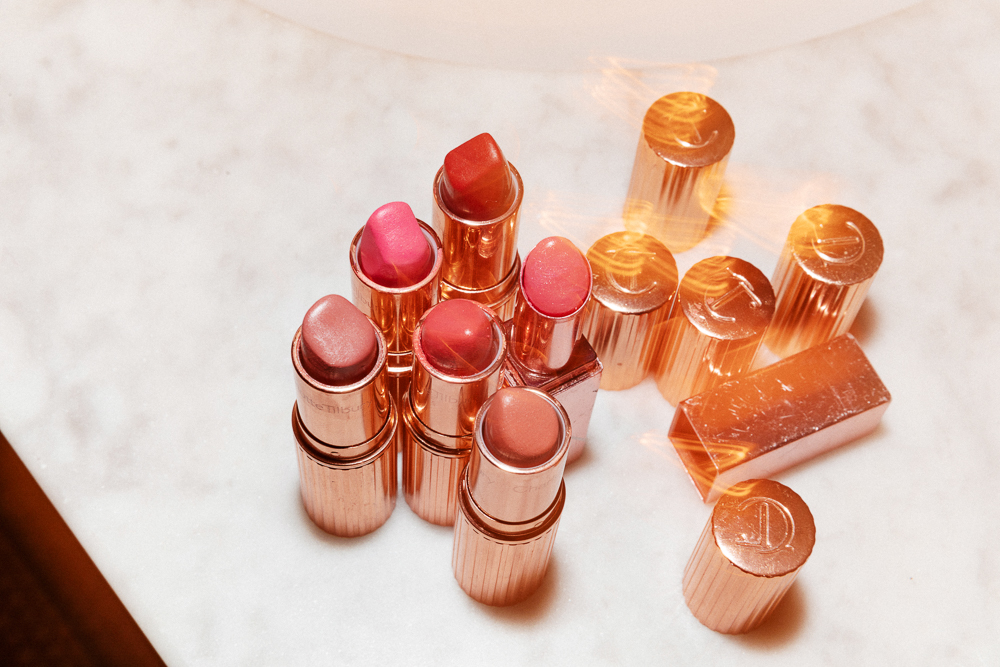 My favorite concealer is the Nars creamy stick, and my favorite bronzer is from Laura Mercier. I use it very sparingly because it's quite strong. I layer it with the Glossier Cloud Paint, and sometimes, honestly, I use lipstick as blush. Bitch Perfect from Charlotte Tilbury is one of my favorites, it's like a coral-y nude. Pillowtalk, Red Carpet Red, and Coachella Coral are good, too.

BODY + FRAGRANCE + NAILS
Even though my nails are a disaster right now, I usually do something for them. In LA I go to Gloss in Silver Lake, and I also like Marie Nails. They're a Japanese salon and they use cal gel. I do this SNS powder, which is a dip powder. It's kind of like gel without the UV. I really love an almost black, and sometimes I like a red—Essie’s Wicked or OPI's Lincoln Park After Dark. Another one I love is Topless and Barefoot. 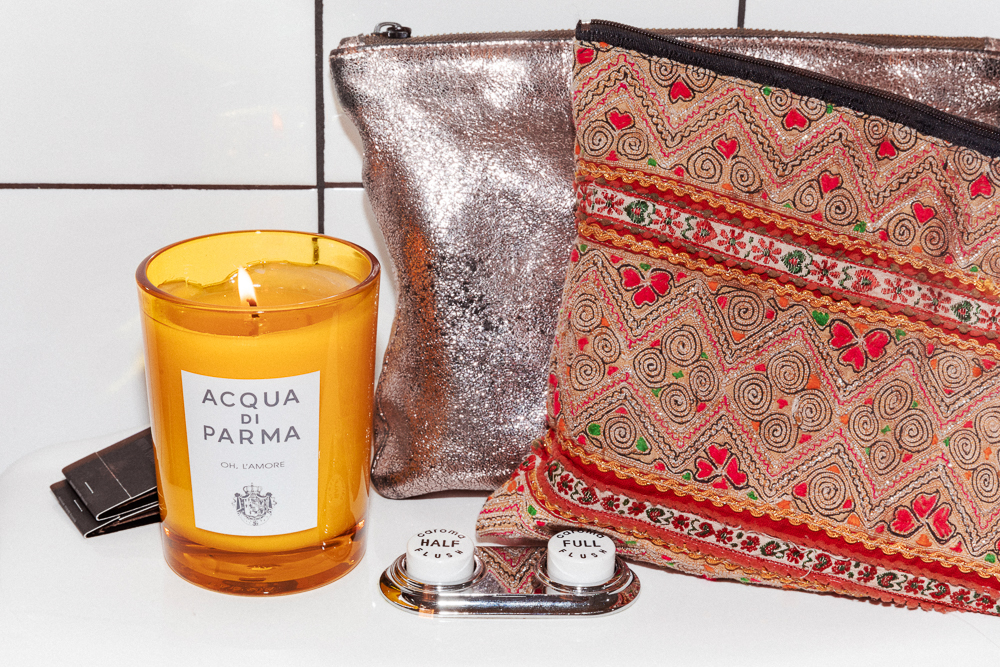 I'm very clumsy. A few weeks ago on vacation, I slipped and fell down the steps. I thought to myself, ‘Oh, that's normal.’ I had a huge bruise next to my tailbone. Huge. But I had packed Arnica because, know thyself. It really works! In terms of body moisturizer, my favorite is the Epicuren Kukui Coconut. It is expensive, but it is worth it. I love the Creme de Corps Kiehl's one, which is also expensive, but the Epiciren one is more emollient and more spreadable. The Kiehl's one is good for the winter, when you have dry skin and really need to soak it up. The Epicuren does the same thing, but it's still light and you can put your pants on, you know what I mean?”