It’s 2019, and a lot of us are paying colorists loads of money to do the thing our bodies might do naturally, if only we’re patient: take the naturally brown (or black or red or blonde) hairs on our head and bleach them white. Search “how to dye hair gray” on Google, and you’ll be met with around 130 million matching results—though it only takes one look at Sarah Harris’s Instagram to make you want glamorous silver hair naturally more than anything else in the world. While some are born with gray in their DNA (your propensity for it is genetic, after all), others have grayness thrust upon them with the help of peroxide. Maybe you haven’t crossed either of the bridges that lead to gray yet, but we’ve spoken to lots of very chic people who have. Here’s everything they had to say about dyeing grays, letting them be, and what making either choice says (or doesn’t say) about growing up.

The Ones Who Did It Early

“I went blonde because I started going gray when I was 23. I was like, I can go dark and it won’t suit me as much, or I can trick people into thinking the gray hair is blonde, and that’s what I did.” —Bec Wilson

“For my hair, I need a lot of moisture—I started going gray when I was 15, so every three weeks I dye it.” —Elizabeth De La Piedra

“When I was 24 I started turning gray. I think it’s genetic, but I think my grays were also stimulated by an ex-boyfriend.” —Walda Laurenceau

“I started getting gray hair when I was 20–like, really gray hair–so I get my grays painted out every couple of weeks. I guess that’s why people with dark hair end up going blonder when they get older because it’s easier to cover grays with blond.” —Hilary Rhoda

The Ones Who Wrestled With The Idea Of It

“I started going gray at 26, but I wasn’t confident enough to let that happen yet. When I was 37, I moved to France and I thought, ‘I’m anonymous here. I can do this.’ And I let it go gray, cold-turkey. It wasn’t cool. And the French can be pretty direct. I remember one guy in my office said, ‘Are you sick? Are you ok?’ He thought for sure that was the only way I would let my hair go gray. But, you know, it was OK. It scared me, because it’s like losing your youth, but it’s totally psychological.” —Catherine Walsh

“I like going gray. If I'm feeling tanned and healthy, then I don't mind the grays, but if I'm feeling tired and old, I'll get my hair colored. It depends on the mood, and how stressed out I am.” —Maria Cornejo

“My mom went fully gray when she was 20, and it’s a genetic thing. If I was all gray like my mom maybe I would rock it, but it doesn’t work so well when you’re trying to play 20 years-old in a movie.” —Aubrey Plaza

“If I didn’t dye it, I think [my hair] would probably be all gray and white. I thought about maybe letting it be, but then I think my hair would be more important than anything else. I’m not ready for that, and I’m not sure that I ever will be.” —Norma Kamali

“I’m not scared of the future, but I don’t want to go gray, and I still want to wear my denim shorts, you know? And all my friends are getting old with me, so I’m not the only one here!" —Cecilia Bonstrom 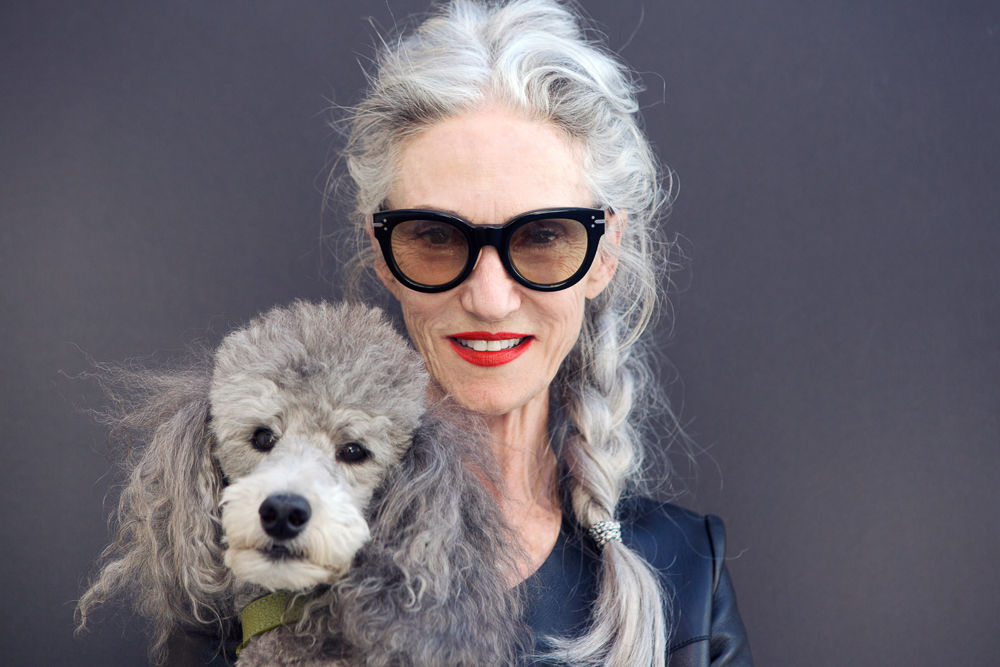 The Ones Who Dye It A Different Color

“Marie Robinson does my color. She’s a genius, but I have been experimenting recently. I tried Hairprint, which is an at-home color that you can literally eat. It seems so wrong, but I was amazed. It covered all of my grays. Game-changer. There's also Madison Reed, which is a hair color that they have in a salon near my office. Hair color is hard, and it can be so bad for you. But these both do a great job. It's a process, but worth it.” —Jean Godfrey June

“I actually have white hair—I went gray really young. And then a few years ago on a whim I decided to dye it back dark because I thought it would be so cool to just let it go later. So I dye my own hair with Garnier Fructis Hair Dye from the box. In between, because my hair grows so fast, I use this Kiss Trucolor Stick on my roots.” —Maayan Zilberman

“I’ve had a lot of grays since I was eighteen. I go to Karen at Daniel Galvin in London for color, and she makes me little bottles so I can do touch-ups at home. It’s all vegetable colors so it doesn’t damage the hair. I want to keep my color as long as possible so I wash it every other day or every third day.” —Julia Restoin Roitfeld

“I used to get my hair cut every few months, and get it colored every time the grays started to appear again…and now, Clairol Root Touch-Up is my best friend. [Laughs] If you are busy, and need to do something in between your professional hair color appointments, it’s a great product.” —Kerry Diamond

“Drybar has this dry shampoo that you can put in your roots to cover up grays. I like that a lot, it looks natural and it's good to use between washes.” —Monica Paolini

The Ones Who Took It In Stride

“I started getting streaks when I was in college. I went to the woman who cuts my hair and told her that I couldn’t afford to have it colored professionally, and that I wanted to do it myself. She told me which dye to use, and I got the developer, and I did it at home. And then I just got tired of it—it took a long time, and I felt like I didn’t need to be spending time coloring my hair every three weeks. It was part of this thing around the 2016 election where I felt like I had better things to do than trying to hide my hair color. I let it grow out, and I’m so happy I did.” —Claire Saffitz

“When the grays came I just said, ‘You know what? I’m just going to accept what’s happening here.’” —Walda Laurenceau

“I had a few white hairs here and there by the time I was 35. At that time, I was also henna-ing my hair and the white ones looked pink! After a while, I just started letting it go that way. It came in very gradually but evenly. I was lucky. And I never associated it with being old.” —Linda Rodin 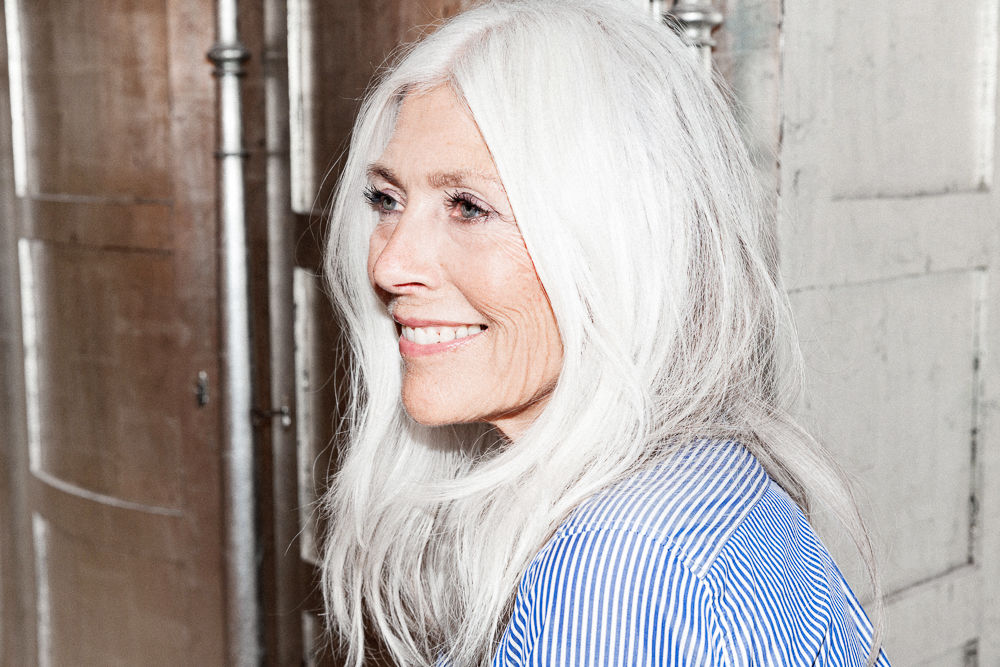 The Ones Who Know How To Keep It Healthy

“The gray hair is so different from the rest of my hair—it’s more wiry and drier. I sometimes like to use real food on my hair, like aloe, avocado, olive oil—heavy moisture. My go-to leave-in conditioner is Shea Moisture and I like their Restorative Raw Shea Butter as a regular conditioner.” —Walda Laurenceau

“I am using Philip Kingsley stuff, which is a treatment for your scalp. When I went to their salon they said, ‘Back off the color,’ and I went about four months without it. It certainly did get better, but I had to deal with really ashy blonde and gray.” —Naomi Watts

And The Ones Who Love It The Most

“I get color maybe once a month, and every time I go I ask what percent gray I am. I have this dream to have long silver hair, but I'm at 40% right now.” —Laurie Simmons

“My hair was colored dark until I was 50, and then I said, 'Time to go white.' And I think now it's my signature. People in New York always ask me if it's my natural color. They like it but they don’t have the guts to do it.” —Gun Britt

“Who knows when I went gray—I was coloring it blonde all the time. And then I was getting towards my 60th, and I just said, ‘I’m tired of coloring my hair every four weeks.’ So I started growing it out, and then I cut it very short, and suddenly everybody loved it for editorials. It’s so much easier to manage. I wish I’d gone white earlier. I think I get more respect [with white hair].” —Maye Musk

“After I went gray, I walked into a meeting and somebody there said, ‘Oh my God, I feel like I should sit up in my chair a little bit taller. You look really serious, and I should pay attention to you!’ I thought that was great.” —Catherine Walsh

“I have lots of grays—my mom would be so mad at me. Oh the years I’ve lived! [Laughs] Every time I go home my mom cries and is like 'Please dye your hair!' and I’m like 'Never!' I can’t wait 'til it gets all white.” —Sunny Shokrae