“I used to be massively introverted, and I’d look for jobs where I had to be outgoing so I could get over it. And then a friend of mine who was obsessed with Lily’s suggested that I work there. I knew how to drink drinks, but I had never been a bartender before. I made a fake resume and listed all these places that I knew had closed, or that I had been a regular at, thinking if they called, someone would recognize my name and play along. I figured worst case scenario I’d really suck in the beginning, and then get better. I sent it over to Lily’s and within an hour I got a response asking if I could come by that night. I was like, fuck it, and went in and started training. A lot of being a bartender is talking to people. If you can engage them, they’ll suffer through your terrible drinks. So I did that for two years, and then I left. But a little while later, when they were opening the Lily’s in Dubai, Serge Becker [part owner of Miss Lily’s] called and asked me to help open it. After that, they asked me to help with the Lily’s in Jamaica. I started off part-time, and I got more and more involved, and now I’m the Marketing Manager.

Recently I’ve been going to Jamaica every other week. We have two hotels there—Rockhouse in the cliffs, which has these beautiful villas with ladders that lead into the ocean, and Skylark, a retro-Havana style beachfront property. I go so much, it never gets old. Some amazing local artists and DJs come play at Pushcart (at Rockhouse), so I’ll hang out there. Then there’s this place called Kenny’s Italian Cafe, which is such a funny name, but it’s the Jamaican version of Nikki Beach. It’s cabana style, with white leather, white drapes—sometimes that can be a fun scene. Or I’m at the Miss Lily’s at Skylark. We throw a party on Wednesday and Saturday nights with dancers and a DJ, and those are really fun. In Negril, if you’re looking for a nightclub, there’s a place called Jungle that’s like full-on nightclub. That’s an experience. 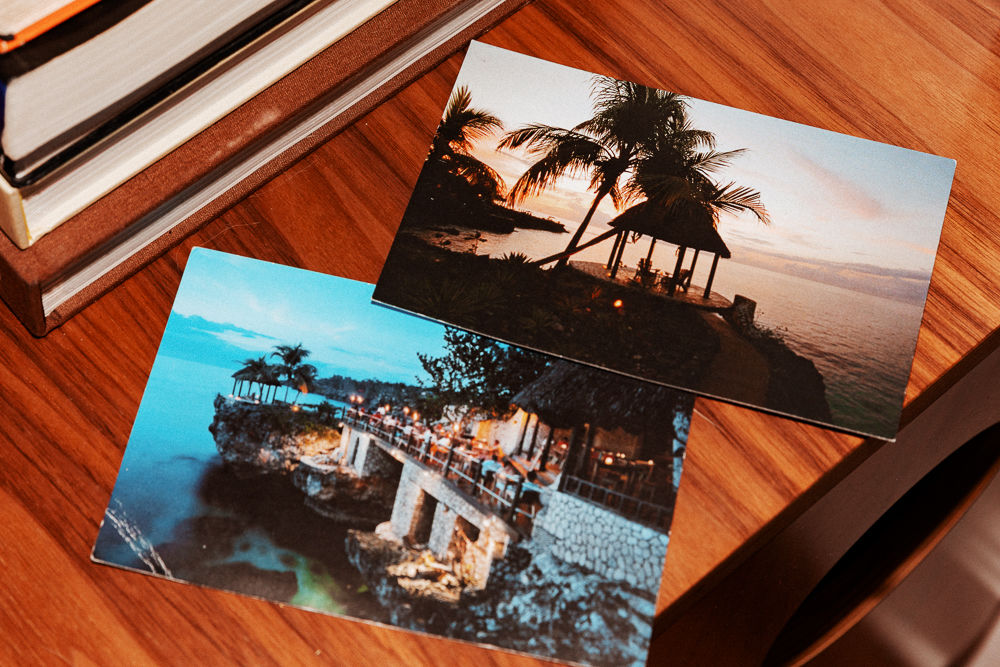 In New York, my ideal night out is going to an amazing dinner with friends, and drinking lots of wine or rum. Appleton 21 is my favorite rum because it’s great for sipping, and it doesn’t make me feel terrible the next day. I find that the better quality the rum, the better I feel—and I only drink dark rum. I don’t like light rum. Appleton 21 is Jamaican, but I also like Santa Teresa, from Venezuela.

I’ll start a night out by going to a Rum Club at Lily’s, and then Max Glazer has parties at Dumbo House, so sometimes I’ll go there. I also like Alley Cat, at the Beekman hotel. It’s super hard to find the door, but if you go on the right night they’ll play some great Afro-Cuban music. I don’t go to The Box often, but I’ve been there more times than one probably should. It’s kind of like a nightclub, but around 1AM these cabaret shows start. Some are beautiful, and sexy, and risque, but the later it gets, the crazier the shows get—one time a guy took a shit on a pizza, and then ate it. That place is crazy. I love it because I don’t think there’s anything else in New York like it. Normally I’m home between 11 or 12, and 2-ish if I’m going out. But The Box is a late night. You’re not coming home until 6AM. 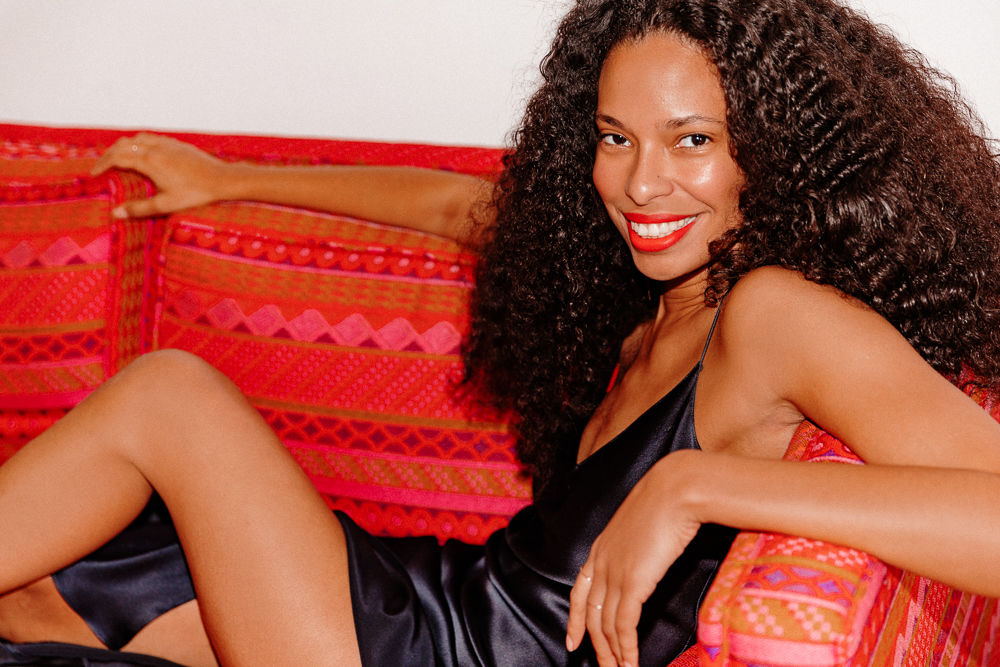 When I’m getting ready to go out, I play music, take a shower, and figure out some way to wrangle my hair. I usually wear my hair big and loose, but sometimes I wear it in a bun—it attracts a lot of attention [when it’s out] and sometimes I’m not in the mood for that. I also try to look like Sade as much as possible, so sometimes I’ll do one long braid. One time in middle school I got micro braids, because of Moesha. It took me like two fifteen-hour days and a ridiculous amount of money, and I hated it. [Laughs]

I haven’t cut my hair since 2004, apart from a few basic trims. I don’t trust people with my hair. Even when they say they know how to do it, I still get traumatized. My mom has stick straight hair, but my boss’s wife has hair like mine. One day she was like, ‘I’m going to teach you how to do your hair.’ It takes me about 20 minutes to detangle, and I do it every other day. I have an amazing brush that I use from Felicia Leatherwood, and I use conditioner from Kinky-Curly—lifesaving! I also sleep in braids, three on each side, so in the morning it’s not completely tangled. One thing I don’t do that often is shampoo. I have one from Aunt Jackie that I use once a week if I have a lot of product buildup in my hair. All my products are pretty natural, except this Ouidad Moisturizing Gel—I got obsessed with it when I used to be one of their hair models. When I put my hair in a bun, I layer that gel on top of the conditioner, and then twist my hair and pull it up. But if I want a little bit more hold, I have a thicker gel from Aunt Jackie that I use. 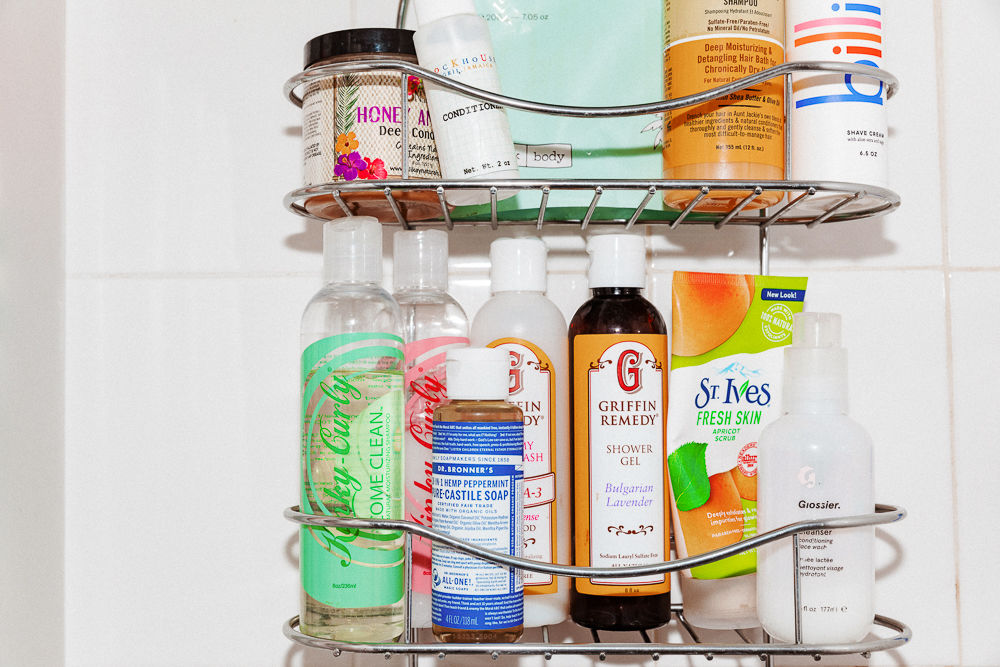 I can’t use coconut oil for my hair—it dries it out—but I use it on my skin. Normally I just go to Whole Foods and buy some kind of good-quality one. In the morning I rinse my face with water, put coconut oil on it, and dance around the apartment for a little bit so it sets in. This year, right before winter, my skin got kind of dry. I went into the Glossier store because I wanted a moisturizing mask, but I ended up with Solution. I was like, ‘Fuck it, I’ll try it, worst case scenario it doesn’t do anything for my skin.’ I feel like toners don’t really do anything, and I don’t notice a big difference when I try serums, but I have noticed a change with the chemical exfoliant.

Another thing I like is tinted moisturizer—I go back and forth between the Laura Mercier and the Glossier one. You know, the reason why I like Glossier is because I can haphazardly put it on my face. If I don’t have to think, then I’m down, I’m sold. But the Laura Mercier has a little bit more coverage, so if it’s nighttime, or if I had a long night of drinking and kind of need it, I’ll use that one. I use a little bit of Cloud Paint in Haze—I have Beam, which I use during the day, but I use the berry one at night. Then I use a little bit of Tarte bronzer as a contour because I want those cheekbones, and a little Glossier Haloscope in Topaz on my cheekbones and nose. No eyeshadow, but I use the same bronzer and the Haloscope on my eyes. And then I have lipsticks. A friend of mine has been Instagramming about this Maybelline Matte Ink one, and I went and bought it in two colors. I’m obsessed. It’s a liquid, and it stays on your lips and doesn’t move, at all. I use a little micellar water or coconut oil to remove it at night. There’s a red, Heroine, and then there’s a wine color that I really like. My friend used to work at Chanel, and he gave me Rouge Coco Gloss in 756, which I love. It’s like a glossy tint. Also, this is really good—YSL plummy wine color in the gold tube. And then Jam is my everyday one. 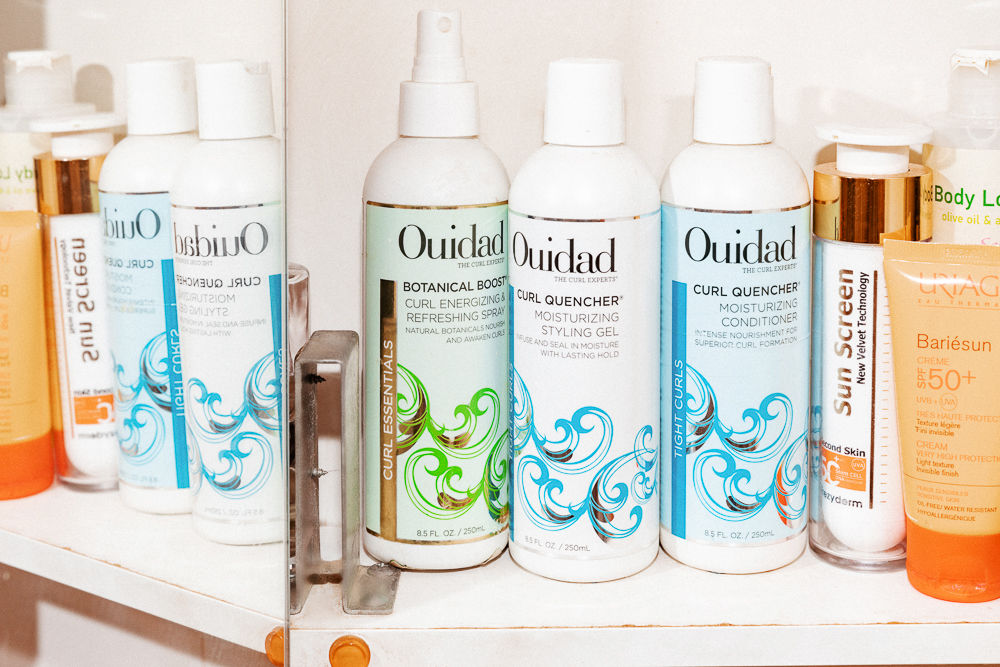 One thing I’ve learned is that the best sunscreen is from Greece—this one is called Velvet Face from Frezyderm, a pharmacy brand, and it literally feels like velvet on your face. It goes into your skin so nicely, and it makes it kind of matte. But for my body, I use Sun Bum spray sunscreen—I use it when I’m in Jamaica. I’m obsessed with lotions and stuff, but when I go to Jamaica I usually don’t want to bring a lot of liquids. Instead, I always end up using this body oil from the hotel minibar. It’s called Caribbean Essentials, and the woman who runs the hotel spa program makes them in the UK and brings a bunch over a couple times a year. And then two girls who used to work at Lily’s now make these natural products called Stripped Ego, and they have a nice body shimmer. It smells like orchids. For the longest time I didn’t use perfume because it would give me a headache, but I like Le Labo Santal 33. I know everyone wears it, so I blend it with this rose perfume from Flower Power.

I can be ready to go out in 15 minutes if I know what I’m wearing—there are certain outfits I really like. I have this oversized white blouse that I bought one time because I thought, ‘That looks like Sade.’ I know it’s corny. I also like Diane Von Furstenberg’s style in old photos at Studio 54, because it’s super effortless. In Jamaica, slip dress, barefoot, I’m fine. I have this vintage dress from this place called Malin Landaeus in Williamsburg, and another one from Dannijo. I don’t really wear jewelry, but these earrings were a gift I bought myself from Treehouse in East Williamsburg. I’ve lost them like three times, usually because of a man, and then I go back and buy another pair. 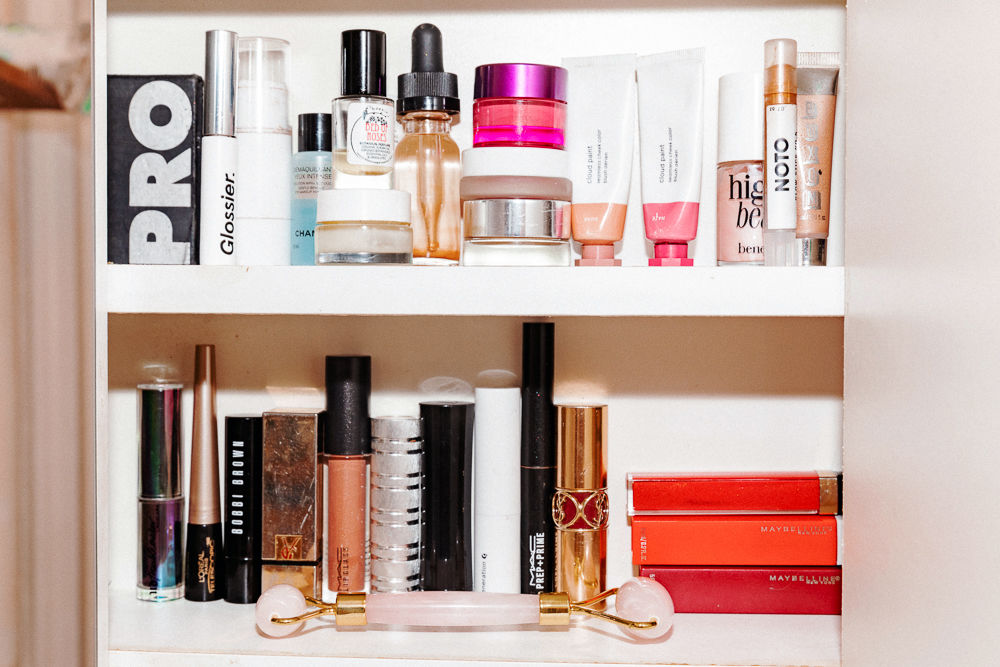 After a night out, I like pizza—come on. I’m not really near a pizza place, but I’ve had many a night with Archie’s. Otherwise Joe’s Pizza in Williamsburg is a 20 minute walk. What I’ve been doing lately is coming home, feeling nice, running a bath, lighting candles, and listening to Sade at 2 in the morning. It makes me so happy.”

Keysha Cosme photograpahed by Tom Newton on April 15, 2019 in Brooklyn.