Time flies! Seven years ago ITG got a peek into makeup artist Gucci Westman's Top Shelf. Now the founder of Westman Atelier, her routine has changed a bit. Here's how:

“I grew up about an hour away from LA until I was 10, and then my family moved to Sweden. I took a sled to school every morning, and I got to see the northern lights. The culture was so cool and cozy, and I was always outside playing in the snow. When I was 18 I moved to Switzerland for a year to learn French. I was doing everything I could do to acquire the language. I lived with a French-speaking family, and the mom was a fashion critic—she actually became a catalyst for me choosing makeup as a career. She was always getting sent tons of makeup, and then she would pass it along to me. She even brought me to fashion shows in Paris. But when I went home to Sweden at the end of my year there, I got a bit distracted. And then I looked up and I was 23 and I knew I had to figure something out. So that’s when I applied to makeup school.

CAREER
I didn’t end up staying at school for long—I stayed for about four months because I felt I got all that I could out of it. Then I went to LA to learn about special effects and how to do movies at another makeup school. When I finished, they were like, ‘Oh, go to AFI and just get independent movies!’ I was like, ‘Really?’ But I did do some independent movies—I did hair, makeup, styling, catering. It was fun, but it was a little bit too much. Around that time I had become friendly with a stylist named Casey Storm, and he was close with Spike Jonze. He told me to meet Spike, and we hit it off. I did commercials and music videos for him for a long time, and I got paid like $350 for 18-hour days. But I didn’t care, it was the best work. Then I started working with David Lynch, and this other director Tarsem, Sam Bayer, and Michael Bay. I know. Michael Bay was like for Levis, I think. And then I got introduced to Bruce Weber and Annie Leibowitz, so I had a little bit of photography work, which added more credibility and more layers. 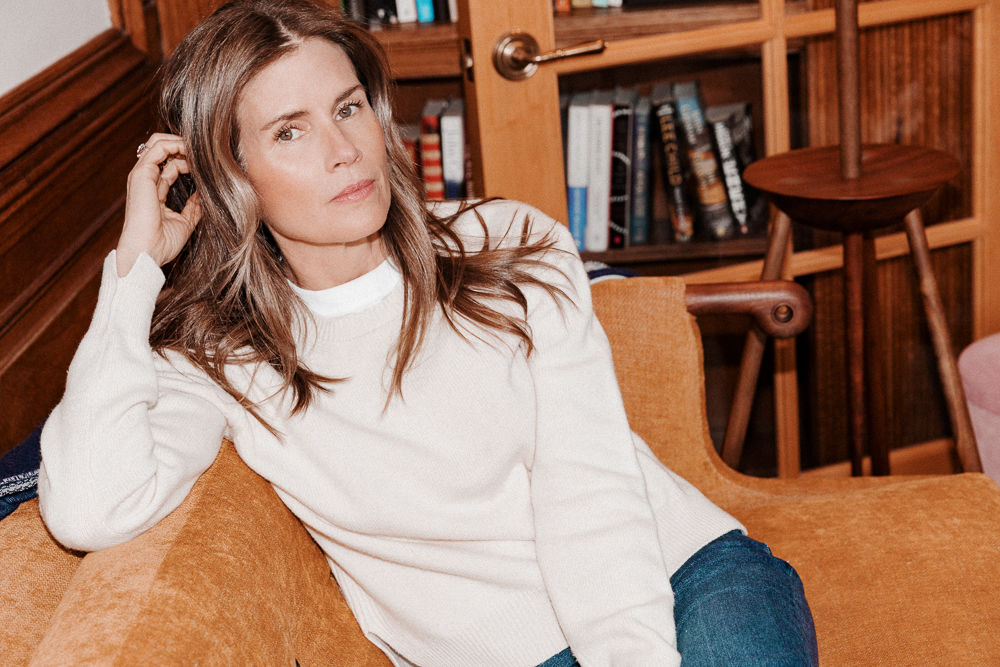 When I assisted other makeup artists, I remember being so on top of everything. Through the client of one makeup artist I assisted for, I was able to get into editorials. I thought, ‘This is what I should do.’ I love the narrative—editorial and storytelling comes so easy to me. So, I started doing a lot of it. My big moment was the cover of Harper’s Bazaar with Cameron Diaz and Patrick Demarchelier. Then I did a cover of Vanity Fair with Annie Leibovitz.

It all really kicked off when I started to work for Grace [Coddington]. She went back and told everyone at Vogue, and then I just got so busy. It was like, insanity—I was never off. At one point Lancôme reached out to me. Working for Lancôme was exceptional and it gave me so much insight into the industry. I did a lot of product development—I was there [in Paris] every two weeks, working with the labs. Because I had committed days [with Lancôme] that they couldn’t move, it was taking away so much from my other work. But even still, I enjoyed the process, and I enjoyed the time with them immensely. Into my fifth year with them, I had my son, and because of all of the travel I decided that I had to step down.

Literally a month later, my agent called and told me that Revlon wanted to see me. I just remember being in a meeting with all of these Revlon people, and they asked, ‘Well, what do you think is our problem?’ I was like, ‘I don’t want to tell you too much until you hire me.’ And then I was with Revlon as their creative director for what felt like an eternity—seven or eight years. 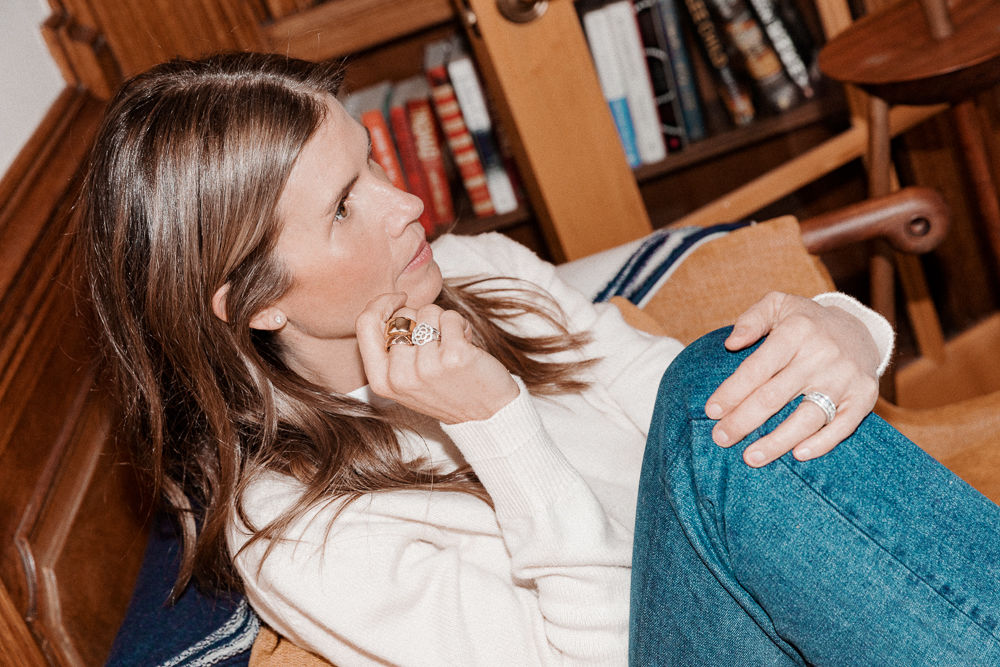 When I left, my husband and I were in negotiations with another company to do a professional line for Ulta. We were pretty far along in our negotiations. I remember talking to David and saying, ‘I don’t know if this is right. Should I do this?’ And he goes, ‘I don’t know, you get one shot. Is this what you want it to be?’ And I said, ‘No!’ And that was that. I just thought it was time to pour all of my experience and knowledge into my own product, which eventually became Westman Atelier.

We have about 15 people working for Westman Atelier now. Product development is like 18 months out. We want to keep it curated and quite edited, as a brand. But I do think that the name has enabled us to think broader, and we don’t have to be limited to just makeup. I am, I think, quite different from say Pat McGrath or another makeup artist brand, because I’m more of a lifestyle. I’m kind of extending that into the brand, as opposed to being super runway. This is more real, you know? I love the fantasy, but I also want my products to add joy to your life.

SKINCARE + BODY
My skincare routine varies because I’m always trying products, but I try to be consistent with facials. I have this incredible girl who’s based in London—her name’s Anastasia Achilleos and she does fascia release. She pulls the skin away from the muscle to activate the muscle, and it changes the shape of your face. She does the body, and she does cranial sacral. I found her through Gwyneth [Paltrow]—I was doing her makeup for her wedding, and Anastasia was giving her a facial every day leading up to it. Because we were staying in the same house [before the wedding] and it was 10 o’clock at night, I was like, ‘Let’s have a glass of wine and watch a movie.’ But then she said, ‘Hm, I’d rather you lie down because I kind of want to treat you.’ She has this hot water body thing that you lie on, and it’s an incredible sensation. I looked like a new person after I had the treatment. She’s incredible. There’s another woman I like—Danuta at Rescue. I’m always on the lookout for new people to try, but I don’t mess around. I think it’s better to be consistent, because I’d rather not have surgery. I think regular facials work, and I also have a hand-held light mask and microcurrent machine. It’s from Rantania—you can only get it in Japan. It’s very effective. 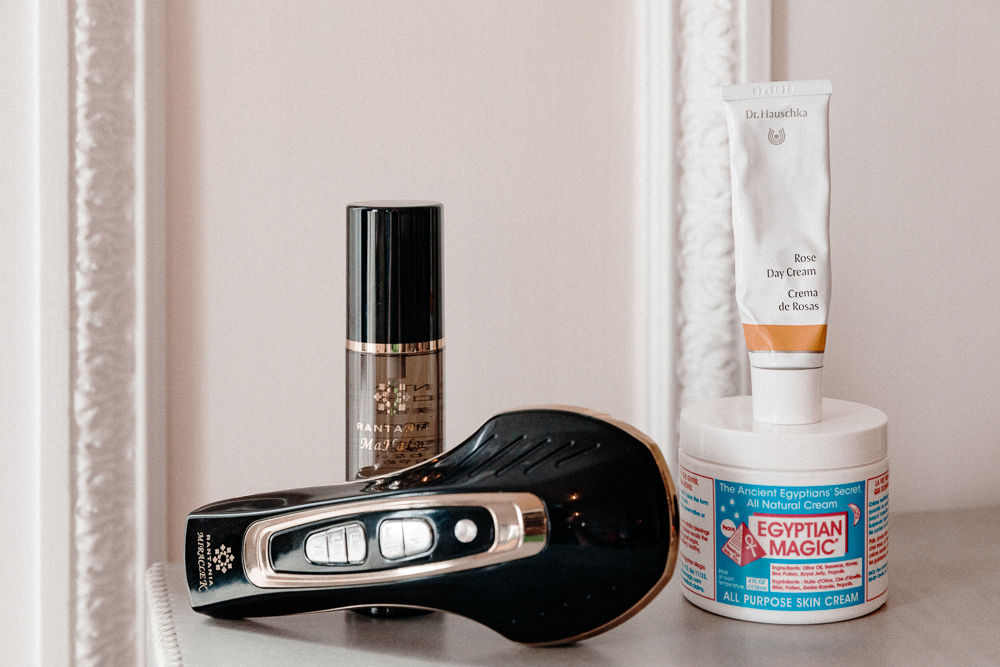 For body, I love Grown Alchemist and Pai. Body products are so exciting to try. I feel like I’m less surprised in a pleasant way by face skincare products. There’s always some reactive issue, and my rosacea flares up. I do like Augustinus Bader, though, The Rich Cream. I believe he’s a genius, and he offers pretty substantial science behind his products. But I can be high and low. Egyptian Magic has been a staple in my personal closet for 25 years. And I like Dr. Hauschka Rose Day Cream, because that always gives me the hydration I’m looking for.

I really love the SK-II Facial Treatment Mask, as well as their overnight facial. Then, I have a Japanese serum that I use with my microcurrent machine, Rantania Mahalo. I used to use a lot of P50. Mother Dirt has a probiotic-based cleansing foam that I love, and then I use these Volition apple cider vinegar wipes. They sting your face, and I like that. I also like May Lindstrom’s mask, the chocolatey one. It smells delicious, very dessert-like. And then Eminence is a great brand. They have a clear probiotic mask that I love. I often do that in the shower, actually—it’s a great way to save time.

HAIR
My natural color is super gray—I went gray at 26. I’m not into anti-aging, per se, but I'm always looking for preventative-leaning products and methods. On second thought, maybe it’s just the term, ‘anti-aging’ that I don’t like. So, I get my hair colored at David Mallett. And then I shampoo and condition my hair once a week, using Rahua and David Mallett products. Sometimes my highlights need calming, so I use a serum from David Mallett for that.

MAKEUP
Because I like to have some dimension in my face, I wear my foundation in two shades every day. I use a darker and a lighter shade and mix them together, and then put it on my face with either my fingers or a brush. Then I use my bronzer, because I can’t go in the sun anymore. I use the Contour, the Super Loaded, and the Highlight a little bit. And then I use one of the cheek colors for both my cheeks and lips. I mostly go for Dou Dou, it’s more pinky. 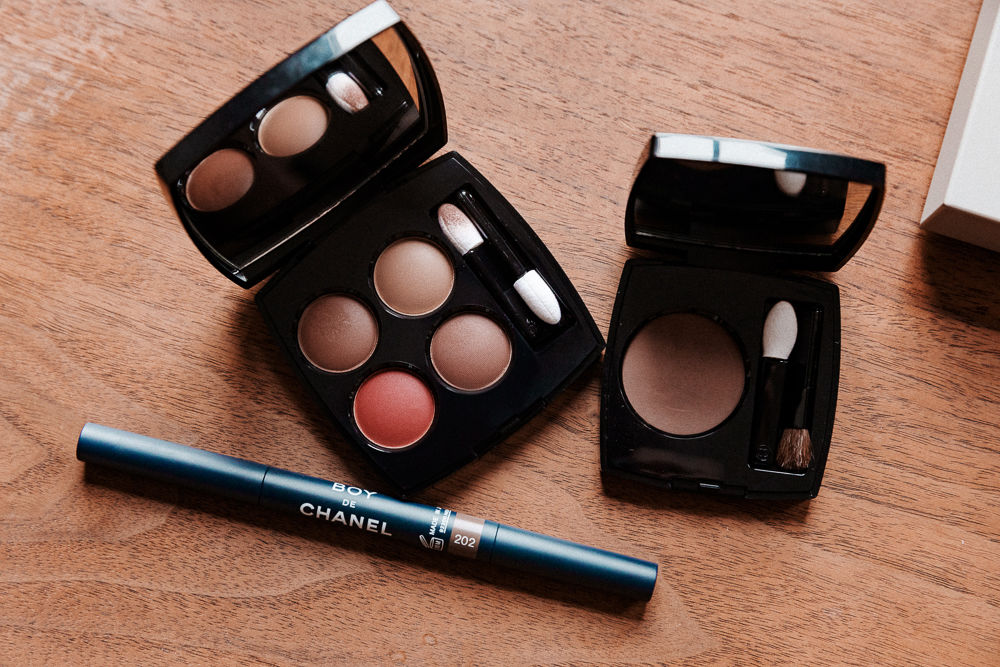 When I was younger my mom told me to never touch my eyebrows because I’d really regret it one day. And sure enough, I tweezed the crap out of them, and they kind of disappeared. So now I use the Chanel Boy pencil every day to make them thicker. I’m afraid of microblading—what if it goes wrong? I feel like I’m so controlling, and I don’t know if they would be able to get the shape right. I do dye my eyebrows, though. At David Mallett, we do it once every two weeks.

For the most part, my makeup takes five minutes. I don’t ever want to look too makeup-y—I feel like it makes me look older. But I do wear eyeshadows sometimes—I’m wearing one right now that I’m coming out with. I also like the Chanel matte palette that’s all browns, because it’s easy. For lips, I like the Nars lip liner in Bahama—it’s a fat pencil, which makes it easier to use. But a gloss on my lips—no, never. Gross. 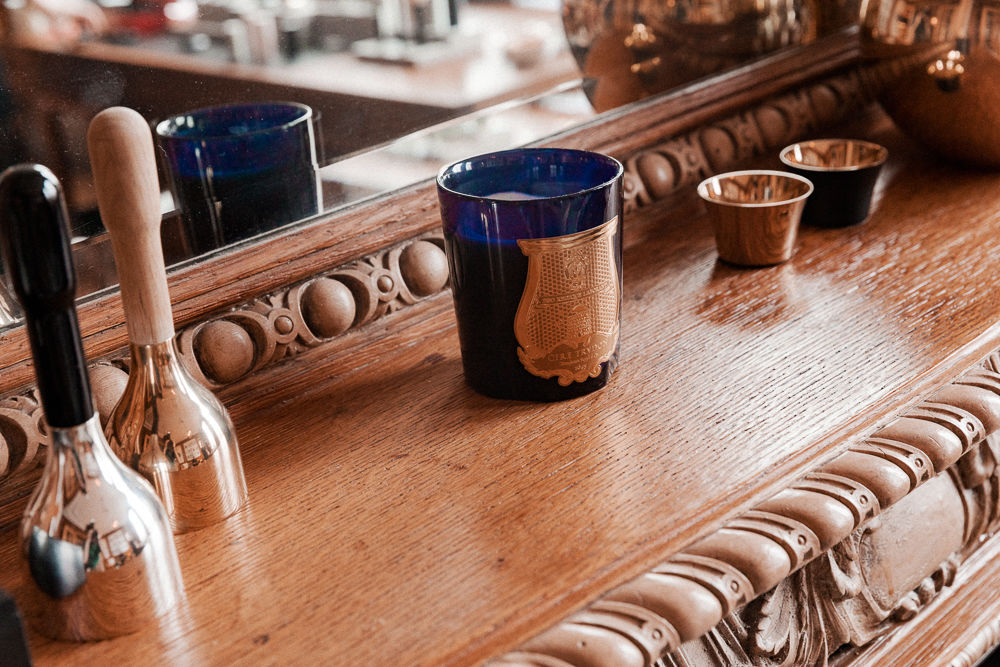 FRAGRANCE
Because I’m terrified of wearing fragrance, I haven’t worn a fragrance in a very long time. The chemicals...I don’t know, I’m not convinced. Also my husband doesn’t like fragrance. However, I love candles—I love Cire Trudon. Actually, The Nue Co has a calming fragrance that I like. I put some on today, but you don’t smell it. It’s relaxing, and I like that.”