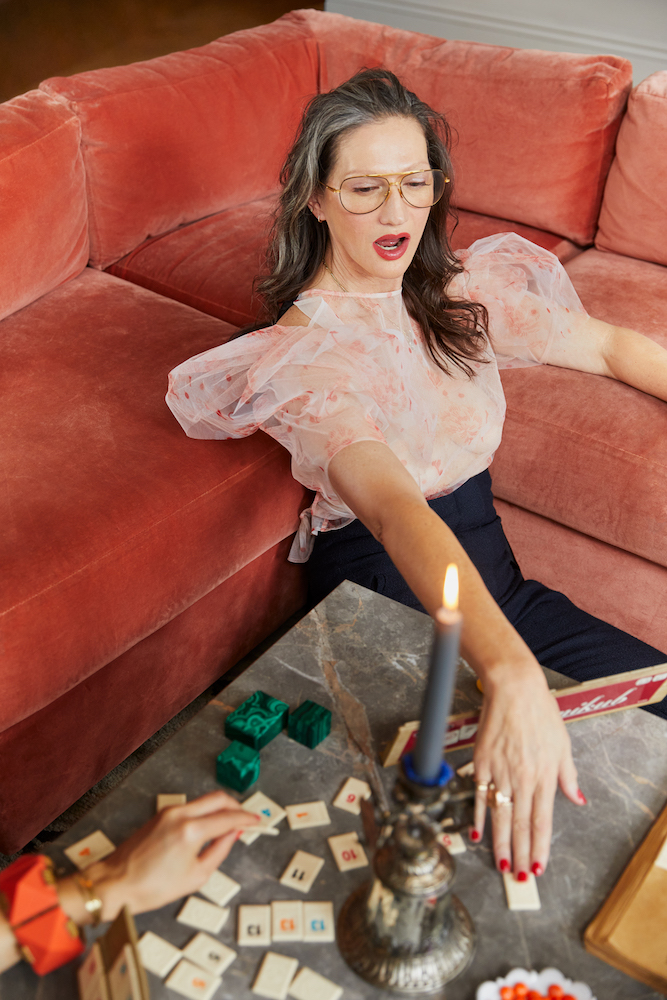 A Party At Jenna's 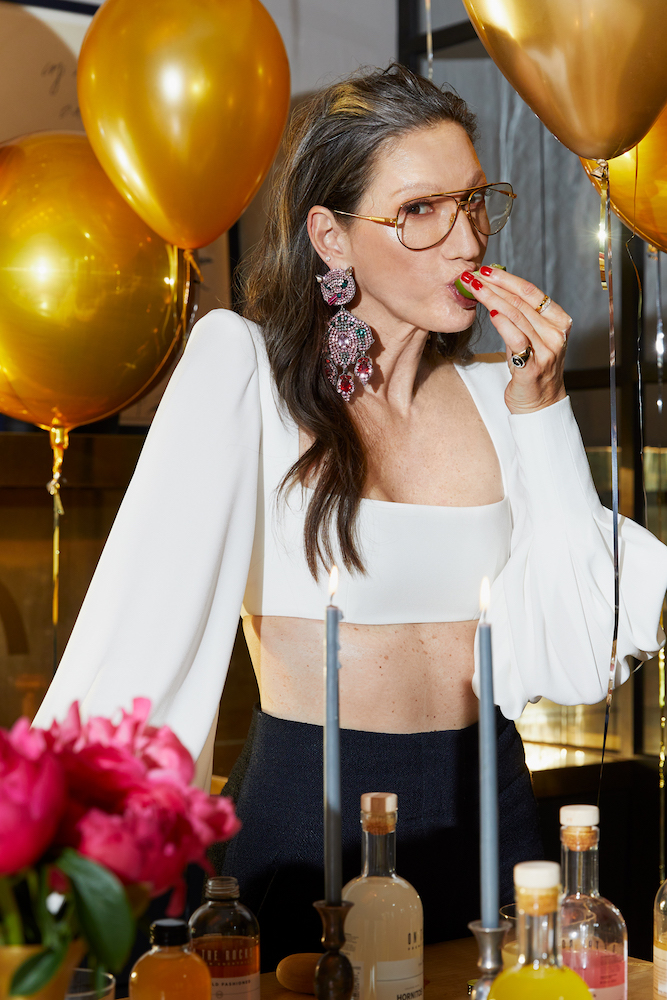 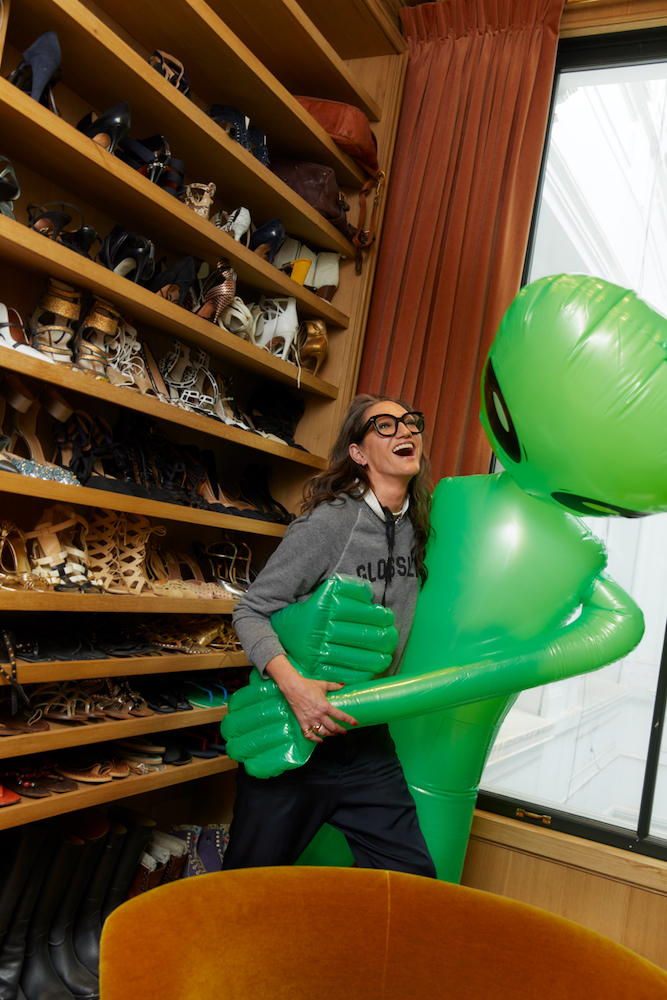 Jenna Lyons photographed by Alexandra Genova in May 2021 at home in New York. Hair and makeup by Troi Ollivierre.

You've sort of been to Jenna Lyons' new apartment before via The Top Shelf. But last week, she invited team ITG back over to party. Well, OK... it wasn't a real party. It was an editorial shoot, with the general theme of festively reuniting with vaxxed friends now that CDC has given the green light. Jenna's airy Soho loft is filled with curiosities and antique collectibles, but she's not too precious about any of it. In fact, she semi-recently gutted the entire thing. A renovation like this one takes years—but Jenna didn't get much time to enjoy her new digs with others before the world went into lockdown. Sharing the space with her inner circle (which includes you now—keep up) feels particularly exciting. And maybe that's the energy we were feeling the day of: With music blasting, balloons glittering, and genuine laughs caught on camera, it sure felt like a real party. Below, come play dress up with Jenna as she hosts three imaginary parties—she insists you're welcome back any time.

Jenna Lyons photographed by Alexandra Genova in May 2021 at home in New York. Hair and makeup by Troi Ollivierre.

A Jenna Lyons fun fact? She loves Rummikub, the parlor game that’s like a cross between Rummy (which you play with cards) and Mahjong (which you play with tiles, and a lot of tricky rules). But perhaps more importantly, she loves winning at Rummikub—and isn’t above playing dirty. Said Jenna with a laugh as she slid in between her reupholstered pink velvet couch and the coffee table: “I really like to play it when other people are drinking. Then you can really mess with them.” The blush tone upholstery worked doubletime as the ideal backdrop for Jenna's game look: “I felt like this frothy top deserved a gentle red lip and nude eye,” she explained. It’s a little romance, but balanced—plus, if you’re too shy to wear such a sheer top out, breaking it in at home is the perfect compromise.

Jenna wears a Simone Rocha for H&M top with Marni trousers. Her glasses, from Dita, frame eyes with soft definition: Troi tapped Glossier Lidstar in Lily all over the lid for shine, then tacked on a set of brown Loveseen Iris lashes. For Jenna's lit-from-within skin, Troi prepped with Biologique P50, Dr. Hauschka's Revitalizing Day Cream, and just a spritz of Tatcha's Dewy Skin mist. Next he applied a sheer layer of Nars tinted moisturizer in St. Moritz and spot concealed with Stretch concealer in G9. A few dots of Cloud Paint in Puff and a swipe of Haloscope in Moonstone on her cheeks catch the last of the day's natural light. And finally, Ultralip in Fête finishes the look.

While we helped set up the second “party” in the kitchen, Jenna played dress up in her bedroom. She started with a sparkly sequin top and white blazer, which felt… somehow not right. Next up was a slinky latex bodysuit, definitely outside of Jenna’s comfort zone. “I worked at a brand for a long time where we developed a look that was very iconic and clean,” she explained, “and being on my own affords me the opportunity to be more experimental, and try things I might not have before.” Ultimately, she landed on a look with a recipe like a mixed drink: one part chill to one part sexy (Jenna chalked up her abs to a recent obsession with the Tracy Anderson Method), and a dash of bold accessorizing. A warm smoky eye, pushed-back hair, and a nude lip maintained the balance between fun and elegant. And as tempting as it was to go straight for a margarita and call the shoot a wrap, we had one more look left.

Jenna pairs the same Marni trousers with a white Alex Perry crop top (it's called the Arlo). Her earrings are from Gucci. To achieve Jenna's subtle smoke, Troi started with Glossier Skywash in Valley smudged along her top and bottom lash lines. He pulled Dolly Wink's Deep Black Waterproof Eyeliner, a Japanese drugstore find, across her top lid, and then used it as a base for black Loveseen Cate lashes. The skin's the same, except he swapped out Puff Cloud Paint for nude-brown Dusk here, which adds tonal cohesion with Ultralip in Villa.

The Party Of One

Reader, even though bars, clubs, and—heck!—amusement parks may be open for business these days, the most fun spot in New York is probably Jenna Lyons’ shoe closet. It’s big, but there’s little space for minimalism: crystal-covered Tom Fords, strappy Gucci sandals, pointy pumps in every bright color and ironic finish (including one pair that bears a striking resemblance to Restoration Hardware’s yeti chair). “I have a tendency to appreciate opposites in a look,” said Jenna, and footwear is the perfect place to play with contrasts. “How many things can I mash up in one look? Give me a minute and I’ll keep trying!” she added with a laugh. Then she threw on a mens blazer with pearls, a smoky eye with a heavy pair of glasses, and dramatic false lashes with a heather gray sweatshirt. Ultralip in Lucite, which doesn’t add much but a sheer glossy finish, offered a palate-cleansing neutral to the chaos... er… everywhere else. Which happened to include a giant inflatable alien. Hey, if the past year has taught us anything, it’s that new friends are everywhere!

Jenna wears a Glossier sweatshirt (her second, because the first got snatched off the back of her chair at a restaurant) on top of a Hugo Boss men's shirt. Her glasses are Tom Ford. Troi added vampy drama underneath the heavy black frames, but kept it fresh by playing with unexpected tones: shimmery moss (Lidstar in Herb) meets matte navy (this single Bobbi Brown shadow) on the lid, and melts into Black Ink gel liner at the lash line. A dusting of Ilia's Radiant Translucent powder, a high-impact Loveseen Noor lash, Ultralip in Lucite, and we're done.