It's a tale as old as time: one partner loves beauty, and the other... loves their partner very much! But every so often, the stars align for romance and routines and you get a couple where both halves are beauty experts in their own rights. That's exactly what happened for Allison and Cass: the former is a longtime editor-turned-founder of her own skincare line, Mara. And the latter is a celebrity colorist whose clients include Natalie Portman, Kylie Jenner, and Rosie Huntington-Whiteley. ITG caught up with the soon-to-be-married pair at their LA home, where beauty's both work and play. Here's what they had to say:

Allison McNamara, Founder, Mara Beauty: We got engaged August 5th of 2019, and the plan was that after I launched my cleansing oil we were going to start planning. Then I sort of did the media tour, and we had all these activations… so our goal became March. We started talking about venues, and then the whole world shut down.

Cassondra Kaeding, Celebrity Colorist: Before I met Allison, I didn’t think I would date another person in the beauty industry. I had dated another hairdresser and—

Allison: She literally sat next to you!

Cass: Yeah, we were one chair away from each other at the salon. We’re friendly now, but I was just sort of like, ‘I’ll probably never do THAT again.’ When I met Allison I was working on the third Hunger Games movie and she was a television host.

Allison: My goal was really to host E! News, but I feel like I was five years too late—by the time I was seasoned enough, no one was making those shows anymore. Anyway, at that time I was hosting this show on TV Guide, and all three of us hosts were blonde. The producers kind of threw it out there that if any of us wanted to try a new color, it was the time. So my colorist started dying it auburn.

Cass: It was very soft.

Cass: One of my coworkers asked to bring a friend and client to my birthday party, that coworker was Allison's colorist, and that’s how we met.

Allison: I remember it was 2014, because that's the year we got Billie.

Cass: That’s how you remember when we met? The dog’s birthday? So sad. After we were dating for a while she was like, ‘Why don’t you do my hair color?’ I knew you would be a difficult client but eventually I had no choice.

Allison: We dyed it this fake red—it looked really cool, but it was much more vibrant than what we’re at now.

Cass: And everybody loved it, so we had to keep it. I created a monster! 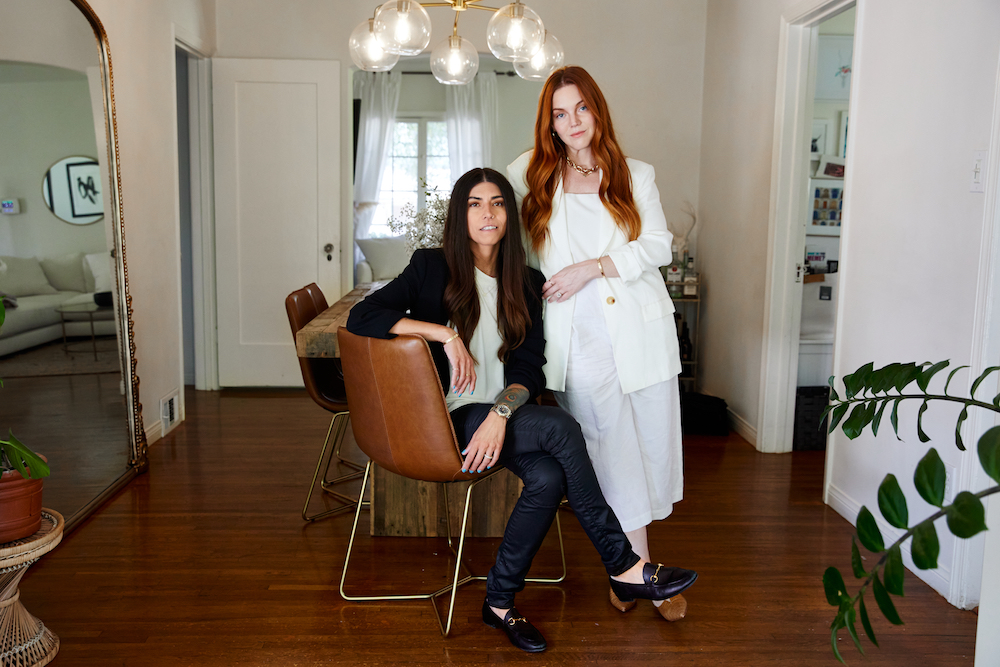 Allison: I love doing beauty things on Cass. Actually, for this shoot Cass wanted to wear her hair stick straight, which is not my favorite way that she wears it—

Cass: I was getting my makeup done so I couldn’t move, and the next thing I know the curling iron is plugged in and Allison is futzing with my hair.

Allison: It’s the Sultra wand. It’s amazing. When we get our nails done together Cass always gets this blue shade. Who gets blue nails every single time?

Cass: You know, if I get anything that’s lighter the hair color always ruins it. This is 168 by OPI, and it’s a gel.

Allison: We really like doing masks together too. I pick the masks, obviously. I like the True Botanicals Moisture Mask for her, because I know that she likes moisture, and the Detoxifying Mask for me. I love the Tata Harper Clarifying and Resurfacing masks—I think they make some of the best masks. There’s a Sonya Dakar one I put on [Cass] a lot, too. It’s the Rose Gold Mask.

Cass: Oh, yeah. I had a few facials with her, and that was fun because she talks a lot as she’s treating you. I actually thought she made my skin look wonderful. She gave me some stuff, but most of my routine is Mara.

Cass: Allison says I don’t use it but I do. I wouldn’t be surprised if she goes into the bathroom to measure it. But anyway, I use the Mara cleanser and the face oil. I actually have some in the salon too, so I can put more on midday. I pretty much wash my hair every morning. We say not to, but I just like that clean feeling, and because I don’t color my hair it’s not very dry. I have a few grays—

Allison: A few?! Girl, you’ve got more than a few.

Cass: Whatever! They’re not super thick, and some are hidden. But the second it gets super solid I will be coloring it.

Allison: I mean, or you could do it now.

Cass: There’s so few! Even though I don’t color my hair it tends to go brassy just in the sun. Brownlights is this progressive toning shampoo and conditioner that came out in the beginning of this year, and over time it cuts the brass and gives my hair sort of a golden tone, which I prefer. There are a lot of similar products on the market, but Brownlights has actually been the best. I spray a little bit of leave-in conditioner, and I use a mask from this Japanese brand called Inphenom once a month. 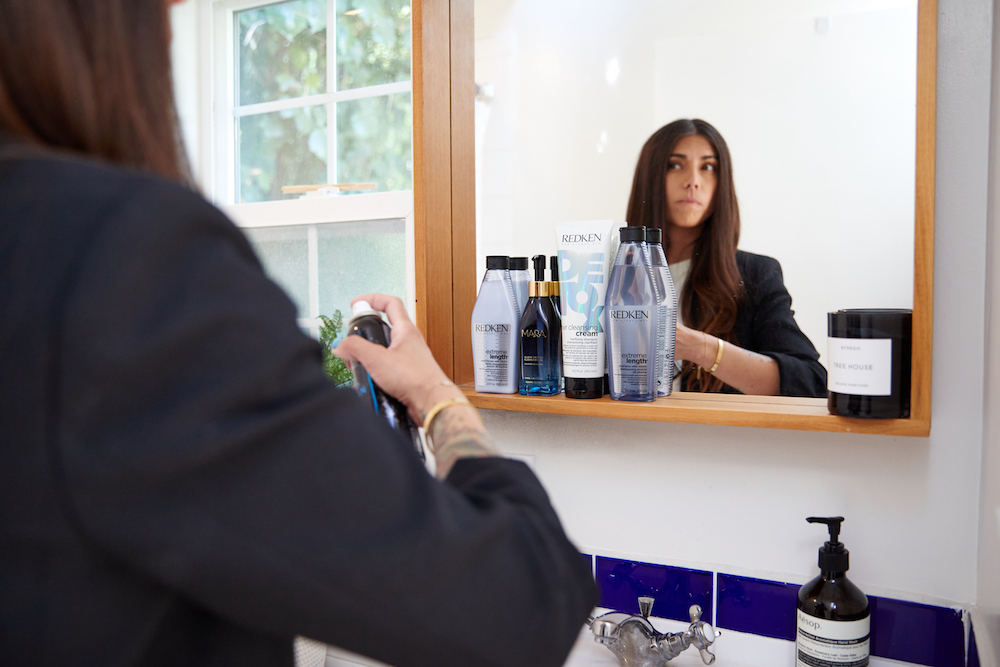 Allison: I have psoriasis, and it’s hard because a lot of psoriasis shampoos strip the color and a lot of color-safe shampoos have fragrance, which irritates it. Virtue’s Recovery Shampoo is probably my favorite, though I’m using this one from Derma-E right now that’s specifically targeted for people with psoriasis, and it really does calm my scalp. I wash my hair every few days, which I can do because you’ll fix the color. I’m always asking to go to Salon de Cass.

Cass: It’s been an interesting rollercoaster for us in the hair industry, but what’s been really great is I was able to set up a salon in our backyard.

Allison: We have a long tandem driveway, and my pseudo-office is actually just over the driveway. I hear ‘Cass? Cass?’ maybe three times a day—it’s her clients, lost.

Cass: In the beginning I was sending out all these color kits, because if you were caught doing house calls it was a two year license suspension and a really big fine. It was just not worth it. I did Kylie’s color with those pieces in the front right after we finally got the OK to do house calls. Of course, I get a test every single time before I go into somebody’s house. 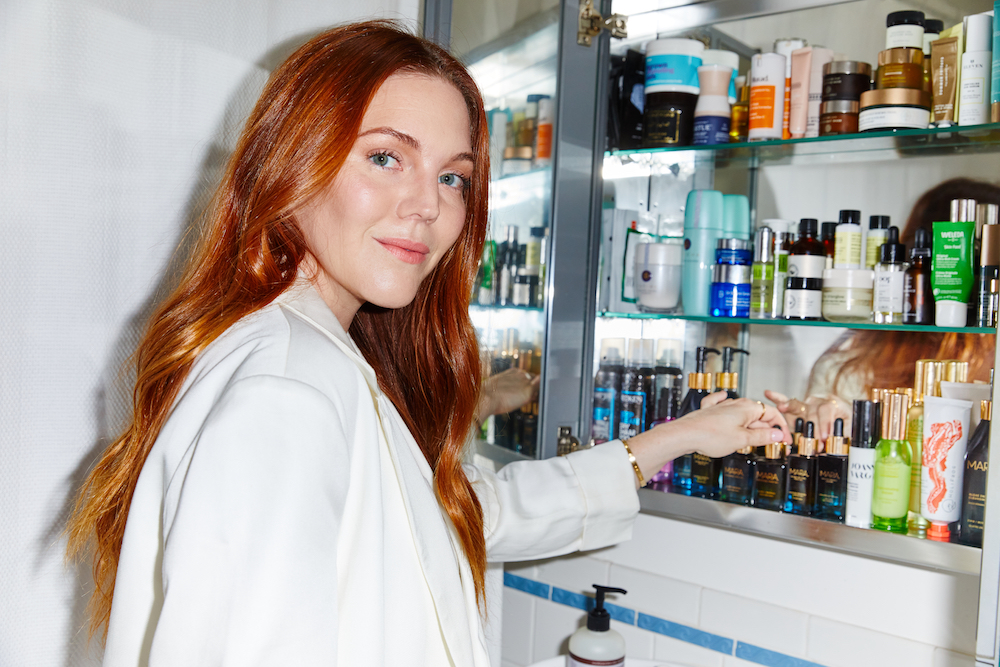 Allison: If I wash my face in the morning, I like the Mara cleanser on damp skin or the Tata Harper Regenerating Cleanser on dry skin. The Tata is a gentle physical exfoliant and it's great for those days when you want to just…

Cass: Get the grime off.

Allison: Yeah. Then I go in with a vitamin C. I love Drunk Elephant’s, but I usually use the Mara vitamin C because I like a very silky dry down, and I think ours does that well. After that, I use Universal Face Oil and then SPF. There’s a Biossance SPF I really like, and I also like the Eleven from Venus drops. I do think that the component clogs easily, which is kind of frustrating, but that’s my ideal consistency for SPF.

Cass: Sometimes when Allison gets a little sun her freckles come out. She gets a mustache of tiny freckles—it’s so funny.

Allison: I hate it. It’s not melasma—I know a lot of women have melasma. I just get straight up freckles.

Cass: And you have freckles on your lips.

Allison: Lipstick is probably my favorite makeup item. I’ve written so many stories that are like ‘This is the best lipstick for you based on your hair color,’ but I don’t actually subscribe to any of that. I like Kosas Thrillest, I love Charlotte Tilbury in Pillowtalk, which is not a super bright shade but I think it’s awesome. I wear Rosette from Ilia all the time, and then Nars Heatwave I love. For glosses, I like Tower 28’s Fire because it doesn’t have any white in it. And for a very light wash of color, I like the Saie glosses—all the shades look the same to me, so I just grab whichever. But who can wear any makeup with these masks?

Cass: I’ve seen a few people take their masks off and it’s like… uh, you have a little something right there. 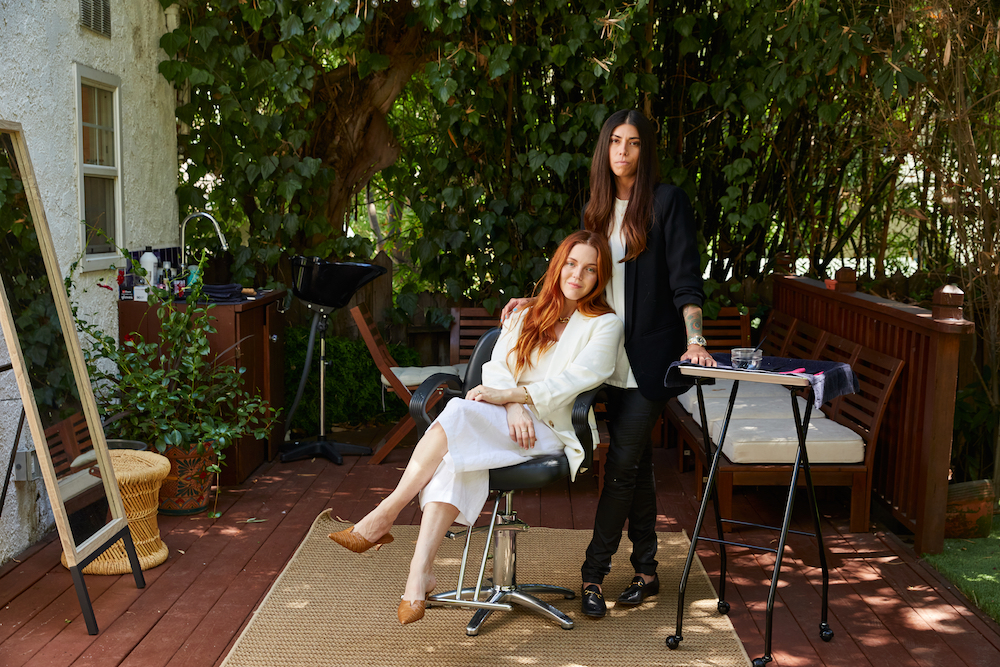 Allison: When I did wear makeup, I liked the Ilia Skin Tint in the lightest shade and either the Ilia concealer or the RMS concealer, which I’ve been using for five years. I love the Tower 28 Dew Balm—I think it’s kind of brilliant. I like a bare lash, to be honest, but for brows I like Saie Beauty’s new Brow Butter or Boy Brow. Oh, and I use Just For Men beard dye to tint my eyebrows. I don’t even let Cass do it.

Cass: I think Allison does a pretty good job with her makeup. It’s always very clean, soft, shiny. I never have to say, ‘Oh my God Allison, take that off.’ The only time I didn’t like your makeup was when you were on television—you had cake face.

Allison: You are so simple that you still use makeup I gave you way too long ago.

Cass: I just keep re-buying the Nars Sheer Glow foundation. The woman there did a really great job at matching my color. Before that everything I used was always too orange or too yellow. Sometimes I’ll mix a few drops of oil into it too because my skin gets really dry.

Cass: I deal with so many chemicals, and it’s hot, it’s cold… I feel like I’m just around so many things that I need an extra layer of protection.

Allison: Actually, we talk about this a lot—I do think the clean beauty space is coming to the point where it’s shaming people. Beauty should be fun, at the end of the day. I love Nars lipsticks, I love Charlotte Tilbury… you can use a clean beauty routine, or eat all organic, or work out a lot, but maybe you also get your traditional hair color done. Life is all about balance.

Cass: For the record, I’ve tried to use clean hair color, and it just… either it doesn’t cover well, or it comes out a different color. Clients are like, ‘Now how am I going to get this out?’ And it takes a while.

Allison: The truth is, I’m not meditating for 10 minutes, and then reading a book, and then journaling—I’m like, panicking, reading the news, drinking coffee. Especially with healthy living it’s easy to be hard on yourself, but life is too short to make everything so regimented.