“I was 23 when I found stand-up. I was at an open mic at Brainwash Cafe in San Francisco, and I thought, ‘Oh, this is what a calling is.’ People talk about falling in love, but then you finally feel it for the first time and it’s only then when you understand what the big deal is. That’s how I feel about stand-up. I don’t even view it as a work ethic—it’s just passion. Ever since my first open mic—with the exception of my two C-Sections, my honeymoon, and shooting Always Be My Maybe—I’ve been going up at least three times per week, maximum nine times a night. I’m going to be touring New York, Boston, and Washington, DC soon, and then my plan is to go to Europe for the first time next summer.

ON STAGE
It was such a boys club when I first started, and inevitably, at the end of the night, someone would be drunk and try to hit on me. I wanted to decrease the chances of that happening, so I would dress like a kid. I would wear this rainbow Adidas Originals vest over a hooded sweatshirt, cargo pants and colorful Asics or Adidas sneakers. I was all covered up. And then I would wear my hair up in two buns, like Chun-Li. After a while, I just felt like wearing my hair down. I think it’s because I got more confident about my craft, and received more respect in the community. Then I felt more secure looking like myself. 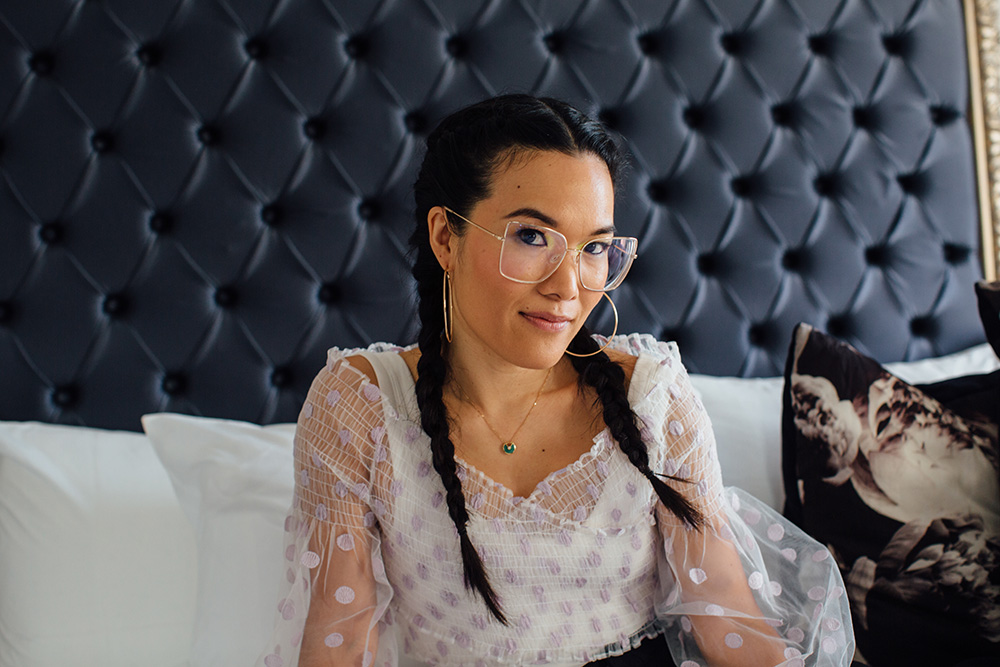 Now, I have to be comfortable, so wearing flats is important. And when I’m working out material, sometimes I’ll drop into an LA club or bar show wearing sweatpants. Women do look really glamorous when they wear a heel, but it just doesn’t work for me. I wear checkered slip-on Vans, and I like wearing a dress that’s above the knee so I can move freely. It’s interesting, now that I’m not pregnant, in that I don’t want to wear anything super tight. I felt more comfortable wearing those things when I was pregnant—you can just stick out your gut and that’s your silhouette.

Before a show, I do my brows. I might put my hair in a little top knot and I’ll do highlighter on the tops of my cheeks and under my eyebrows. Then I’ll do light contouring. I learned that it goes from about a quarter of the way down your ear towards the corner of your mouth—you stop when you hit the outer edge of your pupils. Then I’ll do the Marc Jacobs Eyeliner Gel Eye Crayon in Blacquer on my top and bottom lids, which I learned about a year ago from a makeup artist. Life-changing. I always liked the sixties aesthetic—so I think it looks really sultry and bold and nice. If I’m feeling extra fancy, then I’ll do a whole smoky eye thing with Beautycounter’s Romantic eyeshadow palette. And then I’ll wear Roman Holiday Nars lipstick. The whole thing takes five to 10 minutes. Meanwhile, male comics do jack shit to their faces beforehand.

Women do look really glamorous when they wear a heel, but it just doesn’t work for me.

SKINCARE
I wake up and wash my face with CeraVe Facial Foaming Cleanser. If I’m strapped for time, I’ll just wet Swisspers cotton rounds from Costco with micellar water from Caudalie and wipe my face. Sometimes I’ll put Tatcha Violet C Brightening Serum on my face and neck, but most of the time I just use my Dermalogica Skin Recovery SPF 50 sunscreen. Once a week I’ll also do an exfoliator. I’ll use Caudalie Deep Cleansing Exfoliator and some sort of face mask. Andalou Organics has a pumpkin one that I really like. My face feels so soft afterwards. At night, I’ll use Beautycounter Cleansing Balm followed by the Tatcha Violet C Brightening Serum, Silk Cream, and Silk Peony Eye Cream. My skin absorbs those creams right away.

MAKEUP
If I have time in the morning, I’ll do my brows with the Anastasia Brow Definer in Medium Brown. That’s the first priority—I’ve gotten my hair and makeup done so much over the years, and [makeup artists] always tell me that it goes brows, mascara, and then blush, in order of importance. I love the pencil because it’s self-sharpening and fat—it’s less work for me. And the brush on the other end is forgiving. I used to get my brows threaded, but then they kind of stopped growing. Now I pluck them myself. If I have more time, I’ll do blush with a Beautycounter Illuminating Cream Highlighter stick that I really like, or Nars Orgasm. It’s so fast. You just go boom, boom boom and then rub it in with your fingers. I do believe that your fingers are your best tools. Under the brow with my finger, I’ll do a highlighting situation with the Anastasia Sun Dipped Glow Kit. For my lips, I like Nars Cruising. And then I also use this Tatcha Camellia Gold Spun Lip Balm. Look how fancy it is! It has gold flakes. It makes me feel like Marie Antoinette, wealthy-ass lip balm. I wear that during the day and at night. I don’t do mascara because my eyelashes bat up against my glasses like windshield wipers—they leave streaks. 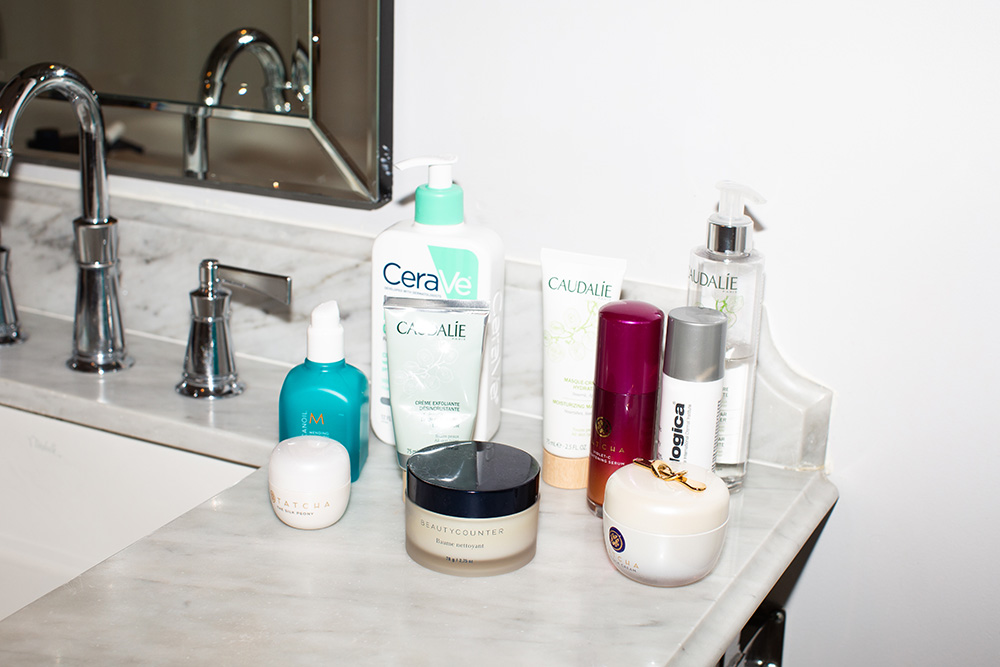 HAIR
I wash my hair about once a week. When my hair gets really greasy towards the end, I’ll wear it in two braids. I give my daughters a very specific haircut that makes them look like Asian Amélie: cute short bangs and then short in the back. It’s very nineties Linda Evangelista. I stick a pile of raisins in front of them and they just eat and let me cut their hair.

MOTHERHOOD
My sister got into an accident when she was in her twenties, and she has these scars from the surgery, so I knew before my first C-section that I might be subject to keloiding and that the scars would be really intense. Now every time I have a friend who’s had a C-section, I’m always like, ‘I want to see your scar.’ A lot of times they say, ‘Oh my God, my scar is terrible,’ but then when they see mine they tell me how much better they feel because mine is so intense... I’ve been in fittings with young women too, who say things along the lines of, ‘Wow! That is no joke.’ But we always have a good laugh about it and it kind of makes me feel better. My second C-section healed the same way, and I just had to acknowledge that I didn’t have control, you know what I mean? And that’s OK. I don’t have the discipline to follow up with scar creams. I just try to be grateful that I had two healthy daughters. The scar is much lower than you think it is—it’s lower than a low back tattoo, but on the front—so the only person who can really see it is me. I do yoga and hike now, but when I was finally able to run three months after I gave birth for the second time, I would run for miles in Stanley Park in Vancouver. That’s when I felt like myself again. I loved it so much.

Every time I have a friend who’s had a C-section, I’m always like, ‘I want to see your scar.’

NAILS
I get pedicures at Q Salon. They’re great. I think they have no idea who I am—that’s probably why I like to go there. And they have an autoclave, which is really important to me in terms of sterilizing the instruments. For Always Be My Maybe I had to get my nails done every two weeks, and we kept it white for consistency, and since then, that’s what I get. I feel like it’s the most neutral color. I have to be careful because if I get tan, my feet look like little dicks, you know? And that’s not cute.”

Ali Wong photographed by Kate Berry in Los Angeles on October 30, 2019. A version of this article also appeared in Netflix's Queue magazine.