“I was born and raised in Phoenix. My grandmother—my inspiration—was a single mom with nine kids, and she helped raise me. I grew up as a multi-sport athlete—actually, basketball and track were my two primary sports. But when I was 12, and my basketball and track season had ended, my grandma said she was not going to let me sit in the house all day. Meanwhile, my older brother Brandon had always played soccer. He made youth national teams as a 13, 14-year-old. I thought to myself that I wanted to travel the world and do what Brandon's doing too, so I started club soccer at age 12. By the time I was a sophomore in high school, I got my first call to join a youth national team. So, two years in, I was like, ‘OK, I guess I have a little bit of potential here.’

I'm the only mom on the national team [USWNT]. And then amongst the National Women's Soccer League [NWSL], there are seven of us. It's so hard, oh my God. The best way I can describe it is that it takes a lot of mental toughness. Of my career in the NWSL, I’ve only played one season where I wasn’t a mom. Trying to figure out a routine is probably the hardest thing, and because I got traded a lot, I had to find new babysitters and child care all the time. Child care in particular was very difficult, because it’s expensive and we don't get paid much. If I put [my son] in a daycare, that's my entire paycheck, you know?

Winning the World Cup overwhelmed me with joy. This was my dream, and so for my dream to actually come true... And for my kid to be able to witness that? He's seven, so he’s at an age where he's going to remember this. And we're going to the ESPYs tomorrow—my seven year old is my plus one! What seven year old can be like, ‘yeah, I went to the World Cup final, I got to hold the FIFA World Cup trophy, I know Alex Morgan.’ And so that's the most important thing to me right now, that he witnesses it all. I want that to inspire him, I want him to know what hard work is going to get him. 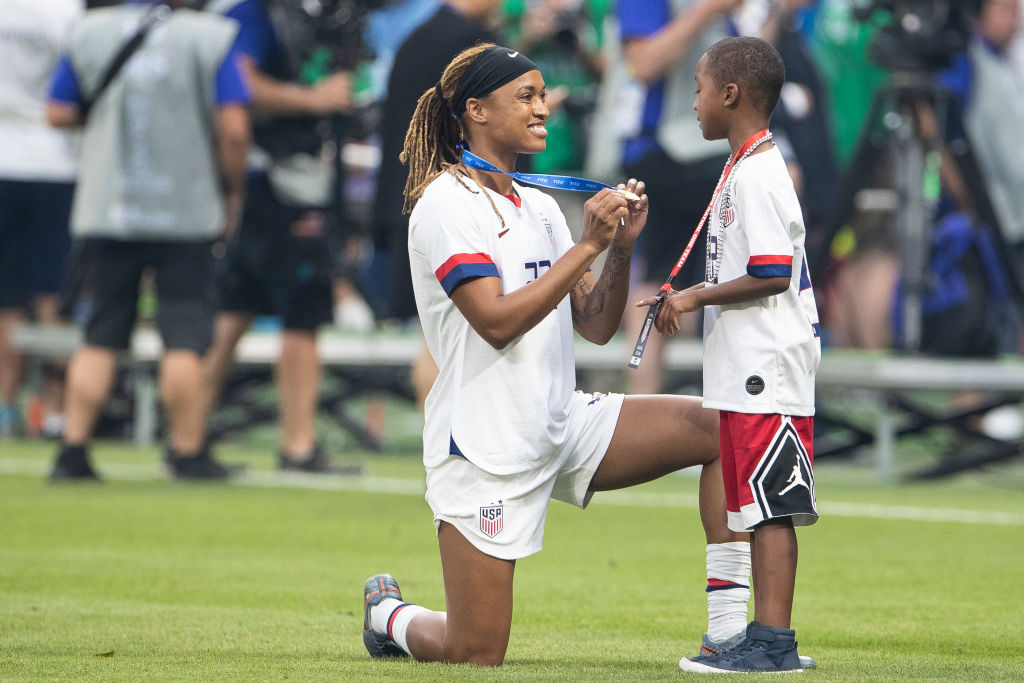 Sometimes I wear makeup while I play—I did it during the World Cup because the cameras were always on us, but for club not so much. If I’m wearing it on the field, I try not to apply too much. I'll do a little Fenty foundation, and I'll put a dab of Fenty powder over it to make it stick more. It's done very well so far. But really, I’m Fenty everything. Trophy Wife, Gloss Bomb, Stunna Lip Paint, Fenty primer, the Galaxy palette. I just love Rihanna and bright colors, so as soon as she came out with the makeup line, all of my other makeup went in the trash.

That being said, I've never had the guts to wear [a full makeup look] on the field. Some women did in the World Cup this year. Marta [Vieira da Silva] wore a nice maroon lipstick, and the whole world was so blown away by it. That's a very powerful thing—to look beautiful as a female athlete, because why not? That's amazing.

For skincare, I love Rodan and Fields. That's what's helped me big time. I didn't have acne growing up, but I got a horrible breakout last year and it came out of nowhere. I even went to get my blood drawn because at first I thought it was a hormonal thing. Dermatologists couldn't figure it out, no one could. And then a friend of mine who sells Rodan and Fields told me to try their stuff. I've been sticking with it ever since. I stopped for about two months, just to give my skin a break, but then I broke out a little bit during the World Cup and just started applying it again, and now my face is clearing up. I use the Unblemish cleanser, and the spot treatment in the yellow package. After games I wash my face with the cleanser, and that's it. Then at night I'll wash again, use the toner, and then the Dual Intensive Acne Treatment. When I wake up in the morning before training, sometimes I just splash my face with water and then apply sunscreen—I like Neutrogena’s, the one with zinc in it. After training I normally just do the face wash and that's it. It's kind of hard because I don't like to wash my face so much. My face is just very sensitive, so I try not to do too much to it.

Louis Vuitton’s Dreamcatcher [Attrape-Rêves] is my favorite fragrance. I spray it three times a day, every day. I went to the Louis Vuitton store with with my teammates, and I never shop, but the guy working there introduced me to it. I smelled it and I was sold. I wear Chance by Chanel as well. Those are my two go-tos right now. I like how soft smelling they are. I'll spray myself before I work out sometimes, and before training sessions.

When it comes to deodorants, I'm torn between two right now. There's one called Art of Sport. It's a new deodorant that Kobe Bryant and James Harden, along with a few other professional athletes, just came out with. It’s specifically made for athletes, so I like to wear that during games and training sessions. I wore it during the World Cup. Other times I’ll wear a more basic deodorant, like Secret or Dove.

In high school and college I always, always straightened my hair. Don't ask why, I was just so into my image. Post-college I started wearing my hair natural. And then, this is my fifth year with dreadlocks. Being a black female athlete, it's already hard enough to take care of our hair in general. And so to go out and sweat every day, and to not be able to wash my hair, it just got frustrating over time. And being a mom and spending so much time on my hair was taking time away from my son. So I got the dreadlocks, and then I dyed it January of 2017. That was my first time dyeing it, and it was so gutsy because I dyed the whole thing blonde. To take care of it, I use this dreadlocks line called Dr. Locs. I use their whole line and it's absolutely amazing. I use their Yaya oil, their shampoo, leave-in conditioner, pre-shampoo, you name it. Once a week I'll wash my hair and just go through the whole routine.”