“Every child actor has to go through the transition to adult actor. I was 11 when I got Never Let Me Go—I grew up pretty fast. As tempting as it is to just keep working, if you want to make the transition in a healthy, constructive way, it is important to step out. I had gotten to the point where I was not getting the kinds of scripts I wanted—it was the girlfriend of the main guy, or the one who was just there to be objectified—so I took some time off to recalibrate. It was only eight months, but it was the longest I’d gone without working since I was 10. Then I got Sweetbitter, and I fell in love with acting again. Not to be cheesy, but it completely changed my life—I moved from East London, where I had lived my whole life, to New York. Everything just flipped. Obviously I had a lot of acting experience, but I had grown up doing films—the whole industry of TV is new to me. The show could get picked up, it could not, you don’t get the script until the day before it shoots… It’s a completely different job. In the show, Tess is thrown into this restaurant industry and she has no idea what’s happening, and I was like that with TV, just trying to stay afloat.I ended up learning with her. A cliche, but life does imitate art. It’s funny how that happens, right?

Another thing that happened in my time off was that I started writing a nonfiction book on mental health with my therapist. We’re approaching the subject from two points of view—there’s a side of it that’s based on personal experience, but then there’s another side that’s scientific. Someone saying to me, ‘Hey, there’s an actual serotonin imbalance in your brain, and the brain is an organ, and you must take care of it like you would your lungs, or your liver,’ is something I’ve found really useful in my recovery. Writing and acting are very similar in the sense that you need self-discipline. You’re not going to learn your lines unless you get off your ass and learn your lines, and it’s the same with writing—you sit, you write, and you have to stick to your own schedule. Up until this point, most of my writing has been on trains, or on set, or at my local coffee shop. They know me, they know my order, and it’s quite nice to have a community like that. But I just got my membership to The Wing, and I’m really excited about it. Between LA, New York and London, which just opened up, I can kind of have a home anywhere. 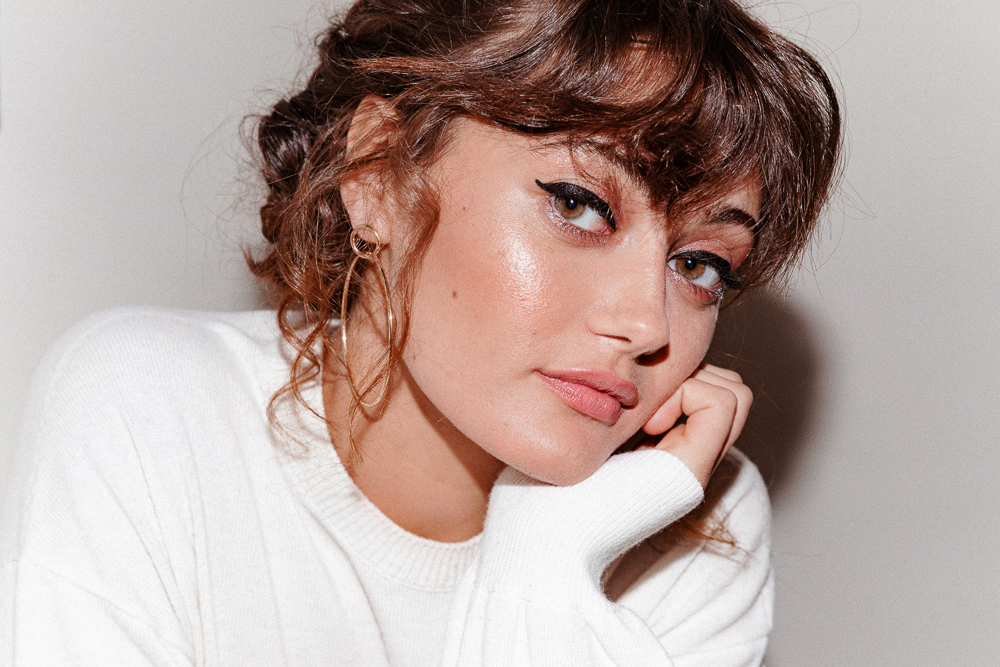 Getting involved with hair and makeup is incredibly helpful in creating a character. I worked on a Tim Burton movie called Miss Peregrine’s Home For Peculiar Children, and for that I was playing a proper character—I mean, it’s Tim Burton. I sat for three hours as they made me super pale and put me in this super wispy white blonde wig. On the other hand, not wearing makeup is a costume, too. For example, in the beginning of Wildlike, my character has this thick raccoon eyeliner. She’s a troubled teenager, she’s gone through an abusive relationship. As her arc goes through the movie, and she gets lost in the wilderness of Alaska, she goes from this synthetic, masked self, to something quite raw. In season one of Sweetbitter, the transformation happens with the hair. Tess experiments with all these different hairstyles—she’s finding herself, and trying a bunch of different things. Then, in season two, it’s a bit more consistent because she feels more comfortable in her own skin. I’m interested in the journey the character makes, and hair and makeup is such an important part of that.

I love getting LVL lash lifts for movies, because I can play natural but still have something framing my eyes. They’re quite big, so without a little bit of lashes you just sort of see eyeballs. They basically keratin the root of your lash to keep them curled, and then they tint them. There are no extensions, and it stays for six weeks. I use the Glossier cheek blush every day. I love the slightly more tan, bronzey one, Dusk. Then I do Elizabeth Arden lip gloss, and I’m done. I stay away from foundation because I have a hard time finding a shade that matches my olive coloring. I actually think my skin is better off from it, since I already have to wear foundation for jobs. I’m super interested in people who use organic and natural products. I have a long list of people I’d love to work with—there’s a makeup artist I found through Emma Watson on Instagram named Justine Jenkins who’s great at that. Honestly, all the chemicals in skincare and makeup kind of freak me out. I had quite bad acne when I was in my teens, and did my whole Proactiv time. It was great in that it worked, but it was harsh and started to dry out my skin. Right now I don’t really use anything consistently, but I think figuring out what you really like is something that comes with age. A routine of all natural, organic products is my next big project. 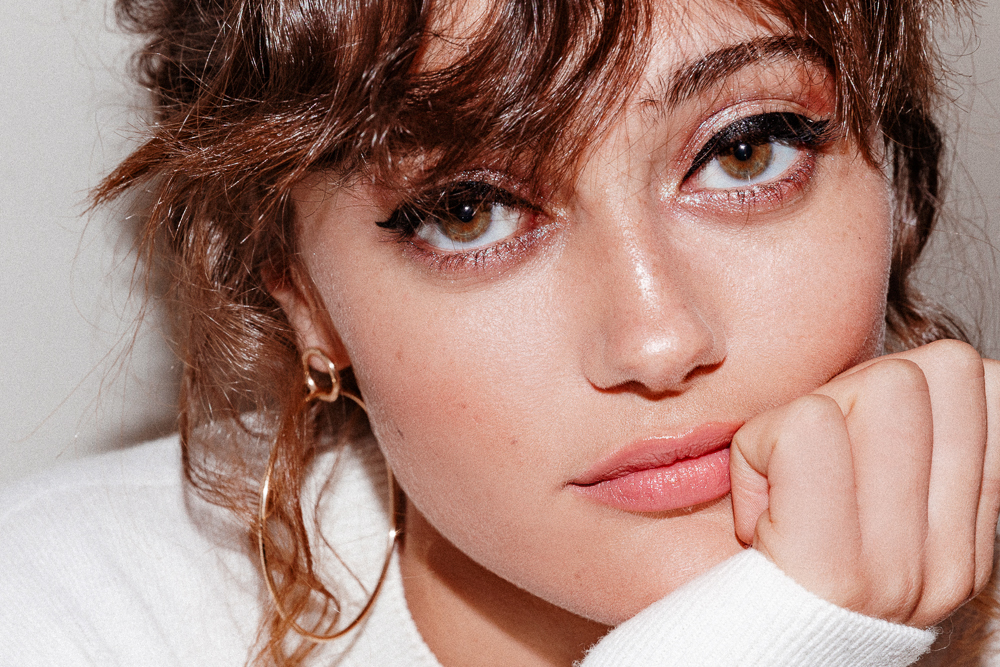 When you’re in the public eye, sometimes dressing for events can feel like getting into character, too. In all the pictures of me at my first ever fashion show, I look like a deer in headlights. The dress was beautiful, and I was so lucky to wear it, but it wasn’t me. I’ve learned that in my press life, I have to ask for what I want. I’m quite an animated person, and my hairstylist knows I don’t like my hair to feel too constricting. Sometimes I like to bring a few photos so he can see the vibe I’m thinking of. My friends like to joke about my style and ask me, ‘Which Ella are you today?’ I used to be super grungy—a lot of black, everything ripped and distressed, fingerless gloves, a hundred big, heavy rings and big cross chains even though I’m not religious. I was quite goth. I went through a phase where I wore, exclusively, thick black liner. I stopped that around 18 because I realized it was a look, and not a good one. Then I went the opposite way. Something that’s always consistent is trainers—trainers are my best friend during press, because I get really sore in heels. And I love when I can wear pants because I can sit, and slouch, and put things in the pockets. It’s important that I feel comfortable, and bridge that gap between the public persona and the real me. I just want to be as authentic as possible. 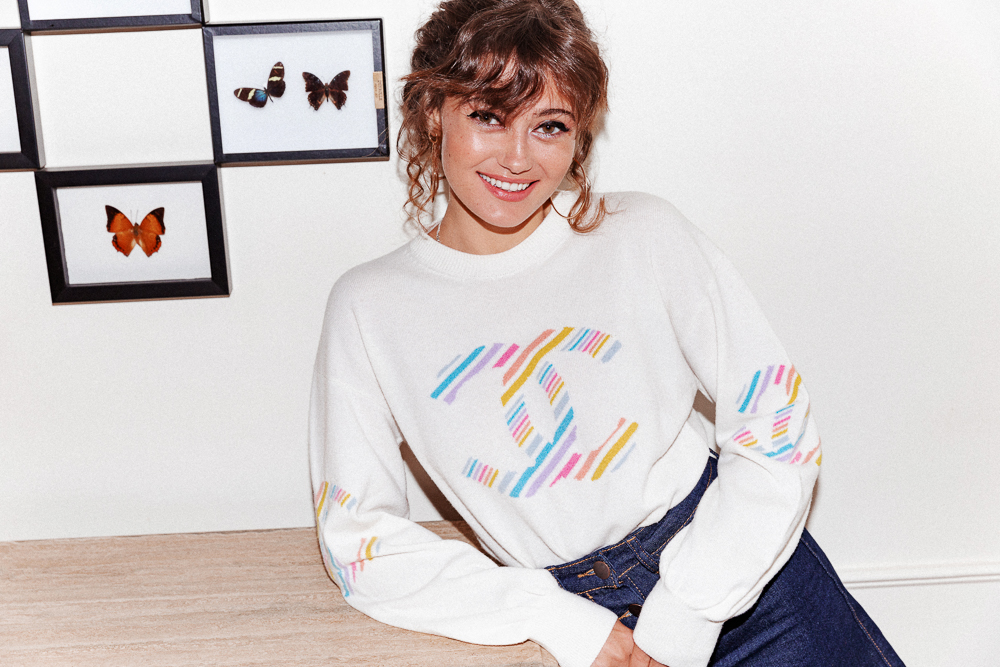 Right now I’m trying to grow out my bangs—if season three of Sweetbitter happens I’ll have to cut them again, and this will all be absolutely in vain, but I figured I’d give it a go. Trying to be creative with the ways you grow out bangs is quite the challenge—I like to pin them back with colorful clips I got on Amazon, or those clips that have diamond words on them. Hats and beanies are a great way to grow out fringes, too. My hair is naturally wavy, but it changes depending on the water, and the weather, and the humidity. If I want it to be straight, I’ll brush it with a Tangle Teezer when it’s wet. I like the one with the handle. It’s still the same head as the original, but you can use it like a real brush—it’s fantastic. If I’m trying to accentuate the curls, I trade the Tangle Teezer for a wide-tooth comb, scrunch it while it’s wet, and avoid towels. Towels will wreck your hair, and make it very frizzy. I always try and air dry it—my mom uses a diffuser, though I never quite got the hang of those. She has really curly hair, but it only turned that way after she got pregnant—that’s crazy, right? It’s mad that bodies do that!

I like unisex or men’s fragrances, really, and it’s always Chanel. They just released three new ones, Venise, Biarritz, and Deauville, and they’re named after the places Coco Chanel vacationed. They sent me to Europe to learn about them—I didn’t know anything about smell, except that it’s your most powerful sense. We were sniffing things, and they were telling us about all the complex notes behind the fragrances, and I was like, ‘Lemons. Candy.’ I’m not very good at it. Fragrance is very similar to wine—once you learn about it, you appreciate the finer artistry.

For me, self-care is about committing to myself. The actual bits and bobs matter less than actually carving out one hour a week and dedicating that time to myself. It’s really about digging deep, and learning to give myself things. Little pep talks in the mirror, repeating affirmations, and setting goals help with that. I’ll do a face mask, take vitamins, moisturize, or shave my legs, but my absolute favorite thing to do is to light a candle and spend an hour reading a chapter of a book that I love. It’s not time that I’m on my phone, or reading emails, or doing laundry, or dishes, or calling that friend who really needs me—because I need me, too.”