The BET Awards Got Glossier

All of our friends were at this year’s BET Awards. Rihanna, Mary J. Blige, Regina Hall, Lizzo, Lil Nas X (yee haw), and... Glossier. Yes, Glossier! Inanimate object or not, it is our friend (it feeds us, it supports us...), and like any good friend, we’re going to show how proud we are publicly, on the internet. Megan Thee Stallion, H.E.R., Ciara, and Ryan Destiny all wore quite the assortment of Glossier on the red carpet last night, and with the exception of H.E.R., all stepped out wearing a swipe of Glossier’s crystal clear Lip Gloss. We talked to the makeup artists behind the looks for a full rundown of how everything came together. Don’t worry, the artists didn’t only wear Glossier—lots of other brands made an appearance. Below, an explanation of each of their looks, delivered to you straight from their makeup artists. 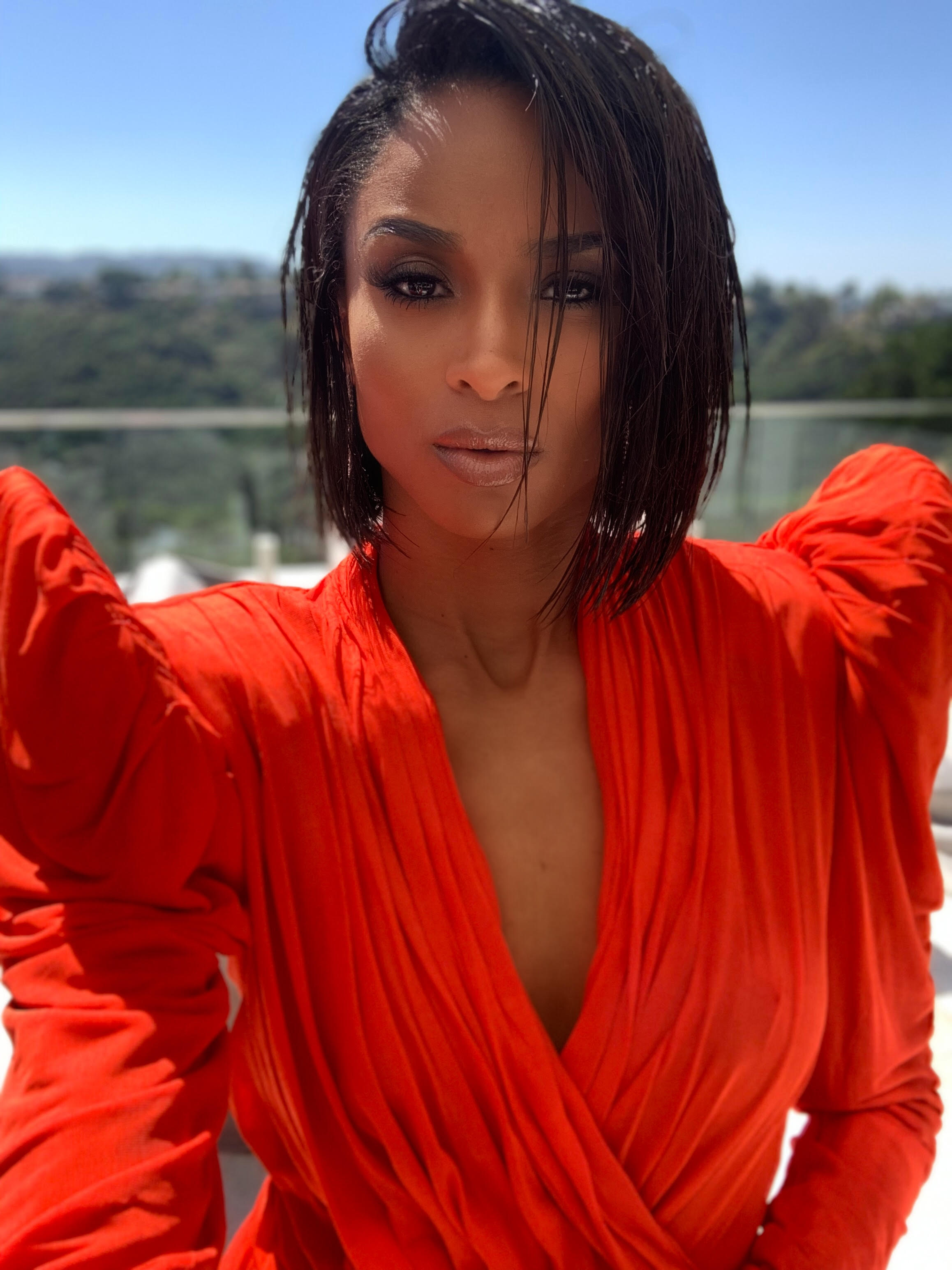 “We decided on a smoldering sultry look for the BET red carpet. First I prepped Ciara’s skin by hydrating it with Glossier’s Priming Moisturizer. I shaped the brows with Boy Brow in Brown, then filled them with my favorite Anastasia brow pencil in Dark Brown to frame the face.

I love doing the eyes first because this is where I spend the most time. First I created the shape by carving out a winged-eye shape using Glossier’s Colorslide in Brack, then blended it until all the lines were diffused. Next, I topped off the eye with Lidstar in Fawn to create a reflective pewter smoky eye. Then I circled back with the Brack pencil to contour the lash line for more dimension. I then popped on my favorite Lash Me Up lash, Bombshell, adding lots of Lash Slick to really light up her eyes.

I love a smooth velvety finish on the foundation, so I customized the perfect colors to enhance Ciara’s warm caramel undertones with the Deep NYX concealer palette—and I only used the concealer palette for her foundation, as she only needs light coverage. In order to keep her skin looking sheer and radiant, I dusted on a bit of MAC’s loose powder in Peach to set the foundation, followed by a hint of Glossier’s Cloud Paint in Dawn. Then I stippled Glossier’s Deep Copper Niteshine onto the high points of the face for the perfect glow up. And for her luscious lippy I used the NYX slim lip pencil in Espresso to contour the lip line, and then blended in Anastasia’s Ashton liquid lipstick before topping off with Glossier’s Lip Gloss!” 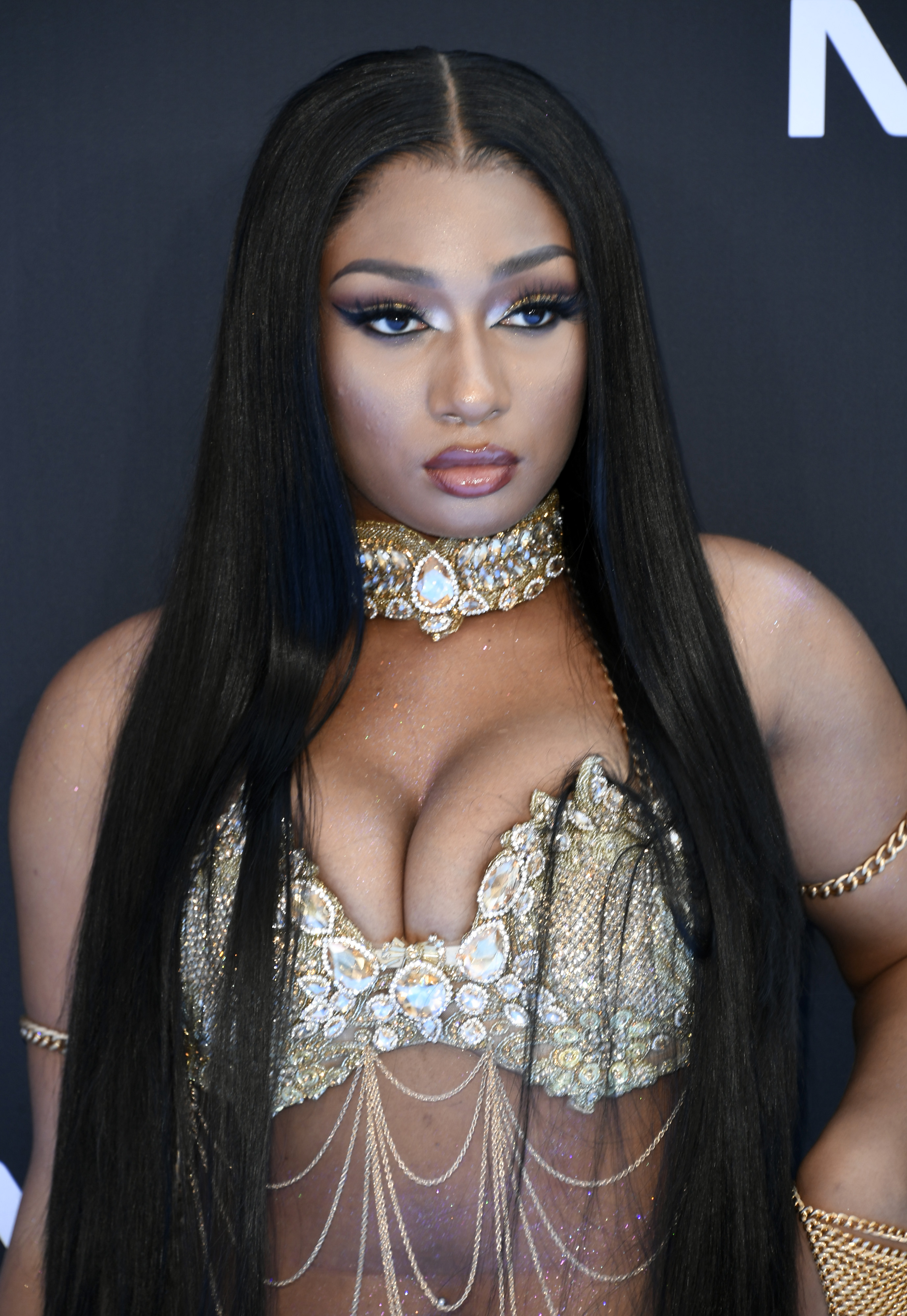 “The look is a soft '80s cut crease, with neutral browns, copper, gold, and a little orange in the eyes. I prepped Megan's skin with Glossier’s Priming Moisturizer Rich, and waited about three minutes for it to fully dry. Then I used NYX’s Studio Perfect Photo Loving Primer on top, paying attention to her T-zone and neck. After, I added some Glossier Bubblewrap to Megan’s lips. The first foundation I applied was Black Opal’s True Foundation in Amber, followed by Maybelline’s Fit Me in Classic Tan 335. Using two foundations makes the beautiful flawless finish of a foundation last longer. After that, I applied L.A. Girl’s Pro Conceal concealer in Pure Beige under Megan’s eyes, under her lip, on her forehead and nose, and then Black Radiance’s True Complexion Concealer in Medium to Dark under her cheekbones to create a contour. Glossier’s Cloud Paint in Storm and Ruby Kisses’ Sweet Cheeks palette was used on her cheeks. I set the makeup with Fenty’s powder in Banana before moving to the eyes.

For the eyes, I used Pat McGrath’s Mothership V palette. At the beginning of the cut crease, about half between the eyebrow and lash line, I used the Aubergine shade. Entrapment went on the lower lid, and blended into the cut crease. Closer to her brow bone I used Blitz Flame, and for a little pop of color on the inside of the eyes, I used Astral Luna Gold. I tapped a gold glitter from Ben Nye on top for a rainbow, iridescent effect, and then I lined her eyes with Pat McGrath’s liquid liner. I filled in her eyebrows with a brow pomade from Jemstone Cosmetics, and I highlighted the top of Megan’s cheeks with a combination of Milani’s Shimmering Face Luminoso Glow, and the Clueless shade from Yes Daddy Cosmetics. Her lips were lined very lightly with Pat McGrath’s Manhattan pencil, which is the perfect nude—not too orange, not too dark—and Pat McGrath’s Full Fantasy lipstick went on top. And then I finished with a few swipes of Glossier’s Lip Gloss. All in all, it took about two hours, and I’m calling this look Hot Girl Summer!” 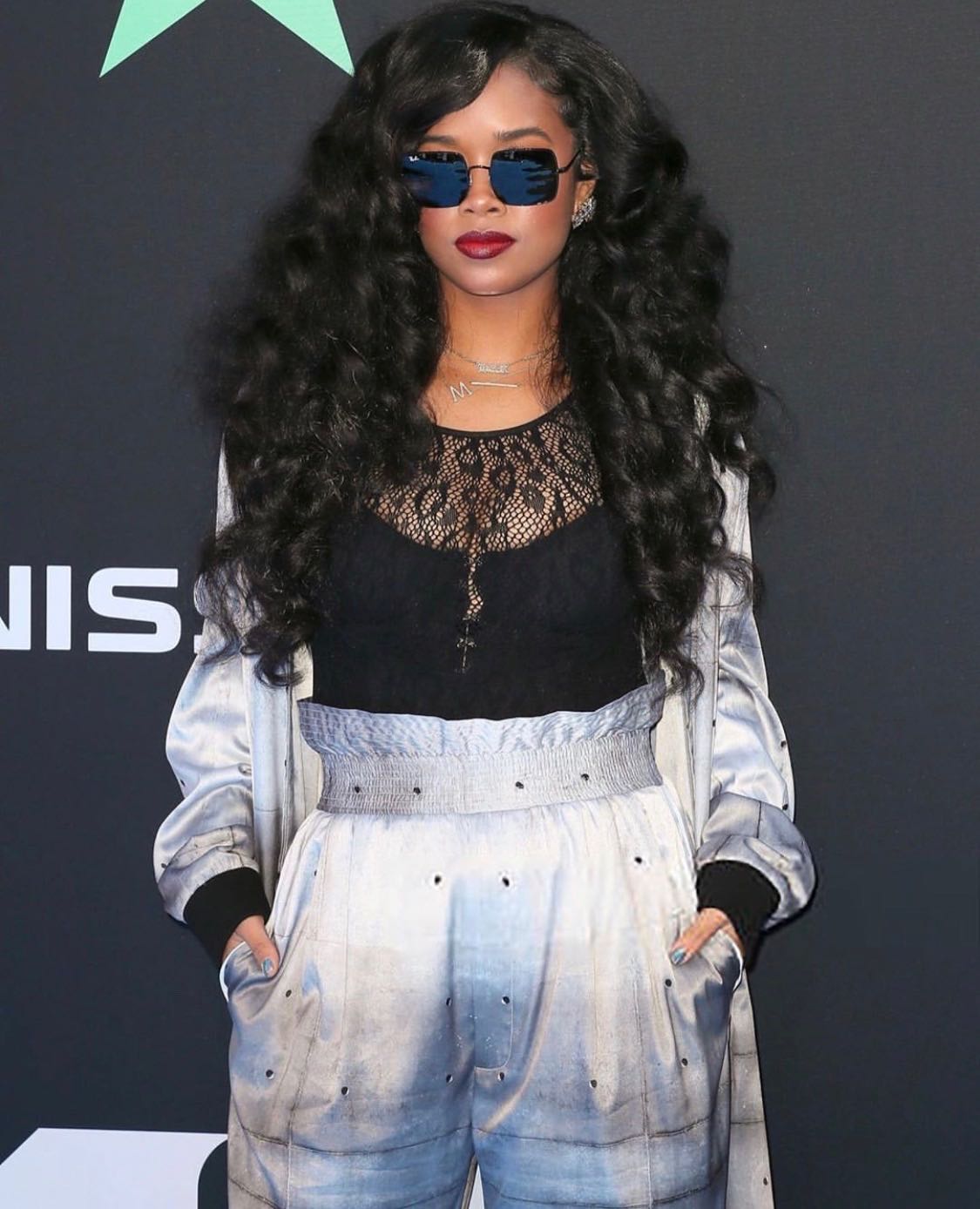 “I always start by asking H.E.R. what she’s feeling… her mood her vibe... it all goes into how her makeup look turns out. Her stylist, Vice, sent me the wardrobe before the awards, and I pulled themes from that to do her makeup. I prepped her face with Skindinavia primer spray and Klorane eye patches. Then I started with her eyes. I used the Goddess shade from Pérsona's Identity Palette, and Royal Prerogative and Duchess from Coloured Raine's Queen of Hearts palette. Her brows were groomed with a combination of Boy Brow from Glossier, and Brow Blade, from Urban Decay.

The foundation I used was Dior’s Forever foundation in 5N and 4W0, as well as the Backstage Face and Body foundation in 4.5. Then I added a couple of concealers, Medium Neutral and Med-Dark Neutral concealer from Urban Decay, and Glossier’s Stretch Concealer in G2. On top, I dusted some of Laura Mercier’s Setting Powder, and then I followed that with MAC’s blush in Sweet as Cocoa [Ed. note: discontinued] and Dark Deep Mineralize powder. Glossier’s Haloscope in Topaz and Quartz went on top, and as for the lips, Make Up For Ever’s Artist Color Pencil in Free Burgundy was mixed with Glossier’s Vinylic Lip in Disco and Bank. We love the lips here! Her signature! And then everything was set with Skindinavia’s setting spray.” 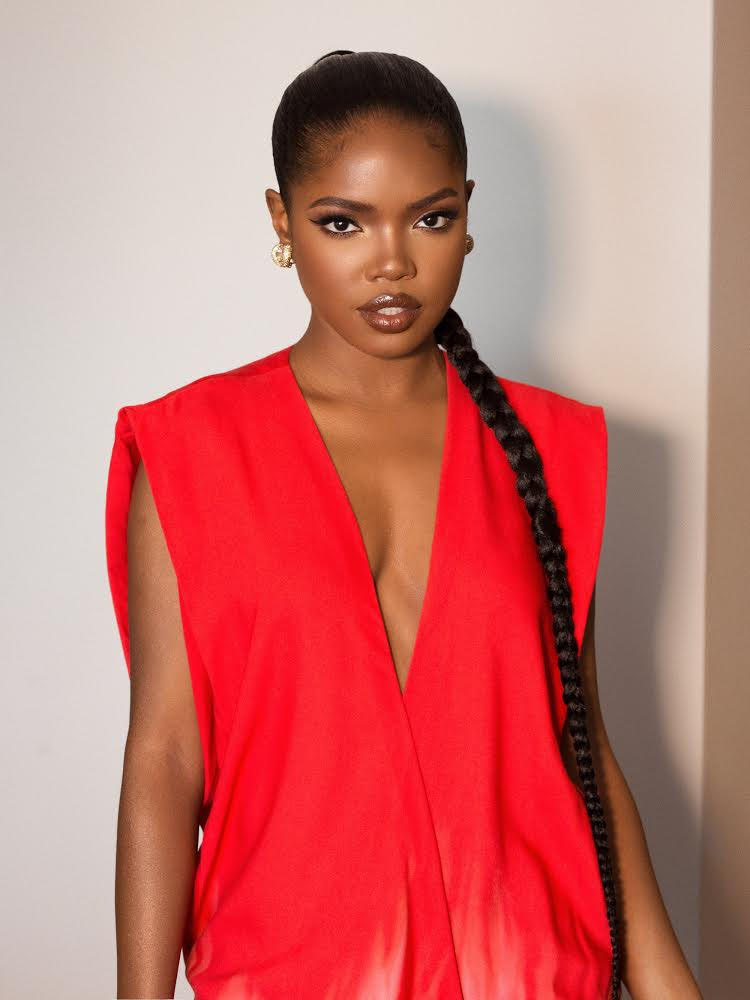 “When I saw the beautiful red dress that stylist Scot Louie pulled, I knew I wanted to give Ryan a flawless complexion with earth tones and a bronze glow. I wanted her makeup to read fresh and sexy, something classic that would photograph well. Hairstylist Darnell [Davis] slicked her hair back into a long, sleek ponytail so that her face would be the focal point. Because of that, keeping the skin flawless was my main priority.

I prepped the skin by applying thin layers of moisture; I used the Moisturizing Primer all over, Bubblewrap under the eyes, and Coconut Balm Dotcom on the lips. I then applied Nars' Natural Radiant Foundation in Macao all over and Soft Matte Concealer in Caramel in the center of the face with a Beautyblender. For a little warmth, I swirled the Cloud Paint in Dawn over her cheeks, building it up in sheer layers, and I added a bit of highlighter in Topaz on top with my fingertips. For depth and shading, I used Anastasia Beverly Hills Contour Powder in Carob on the perimeter of the face. I then set everything with Wowder in G3 in the center of the face and to also mattify the shine.

I kept the eyes simple by contouring them with a dark brown eyeshadow from the Viseart Neutral Mattes palette and elongated them with Inglot AMC liner in Black. I added a touch of Glossier’s highlighter in Topaz on the inner corner of her eyes. Her brows were filled in with Anastasia Beverly Hills Brow Wiz in Dark Brown. A set of minx lashes by VLV Lashes in Style 01 completed the eyes.

Lastly, I lined the lips with a warm chocolate lip liner from Colourpop in the shade Bff 4, and used Leo to blend the liner out. To complete the whole look, I applied a generous amount of Glossier’s Lip Gloss.”