Fact: fall is the best time for candles. You’re more apt to be indoors, lighting something warm and molten as temperatures drop. But beyond the logistics, it’s also a scent thing. It’s hard to go wrong when there is nothing wrong with the classic profiles: cinnamon, cardamom, cedar, sage. Even the cheap, cheesy, obvious ones are great! So cozy. So comforting. So nostalgically tied to the idea of fall that staying in and burning one can make you think the leaves outside are crunchier and the sweaters more expensive. That being said… something being unwaveringly good doesn’t mean there’s no room for great. So, with greatness in mind, ITG’s editors set out to find the candles that riff off of and actually improve upon the classics. What we found didn’t fall short: a little more nuanced, a little more elevated, a true delight to treat yourself to. Below, what we’ll be burning for the next few months. 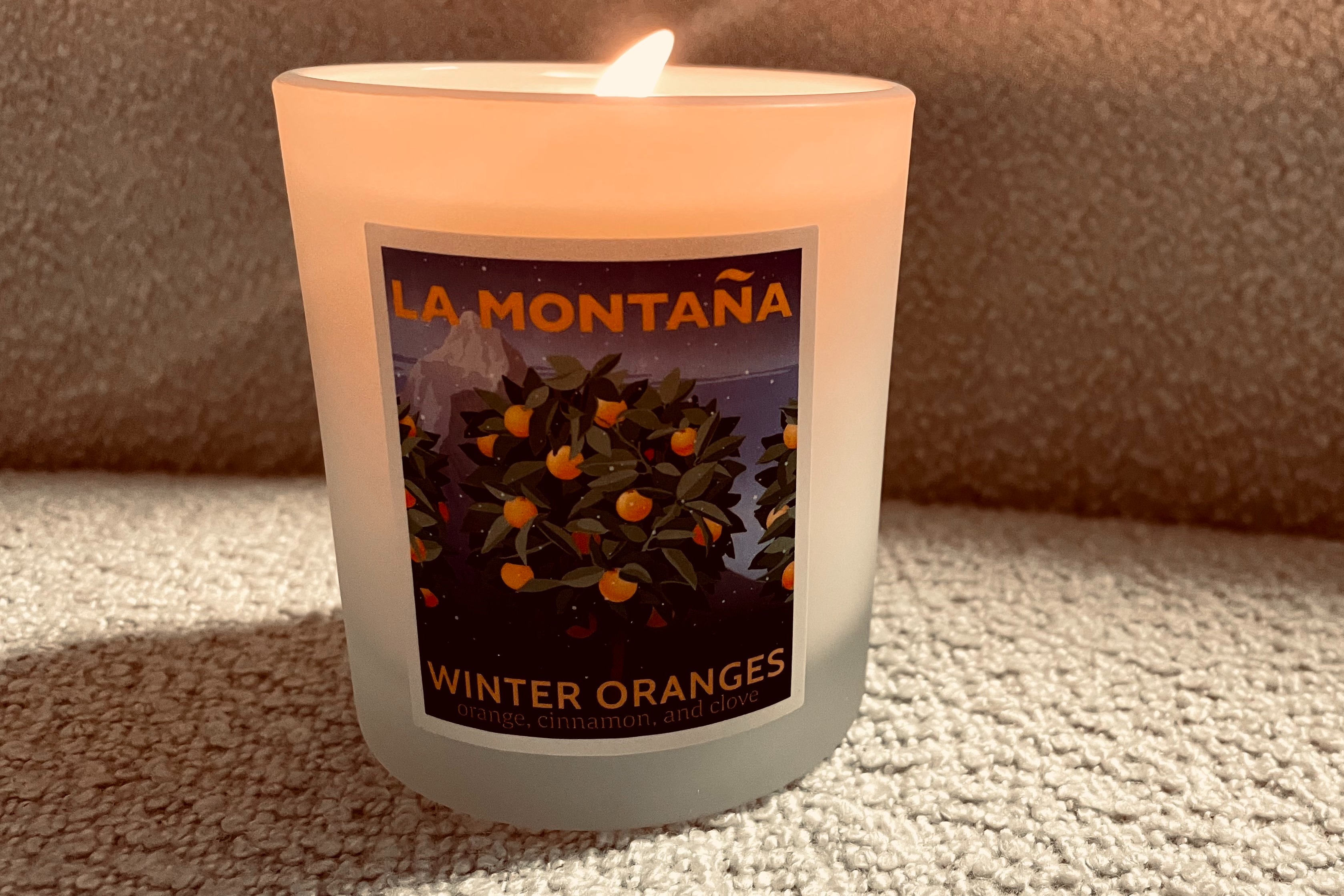 What they say: “A warm, spicy, zesty blend of Valencia orange, cinnamon, red apple, and clove”
What we say: These candles are strong—seriously, you only need to hover your nose a foot away from the unlit wax to get a distinct whiff of the fragrance. It’s a lot of bang for your buck, which is exactly what you’re looking for from a luxury candle. Each of La Montaña’s scents are inspired by the memories founder-duo Cassandra and Jonathan Hall picked up in Spain, and Winter Oranges is no exception. It smells like the fall version of a creamsicle. Top notes of pie spice come through first, and you think, old news! But then you get the juicy, totally unexpected citrus notes. And it works! It’s the perfect introductory candle to the brand. (Though, for a second pick, we also love the off-beat, raisiny Mistela). 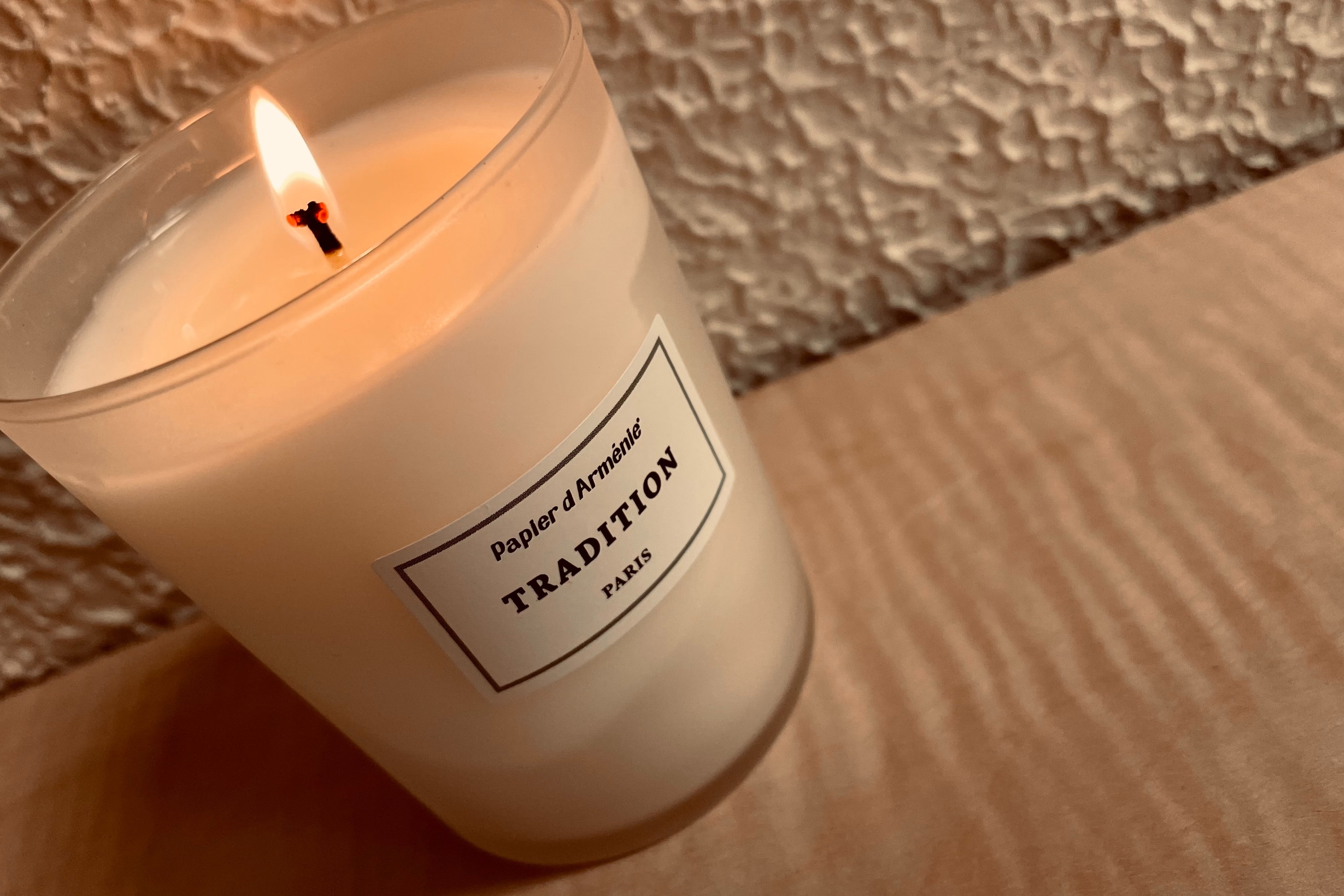 What they say: “Sweet, vanilla and balsamic scents of the far east”
What we say: A Maison Francis Kurkdjian candle will set you back anywhere from $85 to over 100, but Monsieur Kurkdjian himself is the nose behind this scent, and it only costs 35 bucks. A steal! It’s the candle version of Papier d’Arménie’s incense papers, which may be easier to burn if smoky incense isn’t your thing. And it smells like a Parisian apartment furnished on 1st Dibs: classically sophisticated, but not old or stuffy. It’s like the powdery scent of a Cabbage Patch Kid (do you know the one?) wrapped in a cashmere blanket, eating a vanilla-y creme brulee. Cozy and woody, it takes on a deeper, richer scent as it burns. 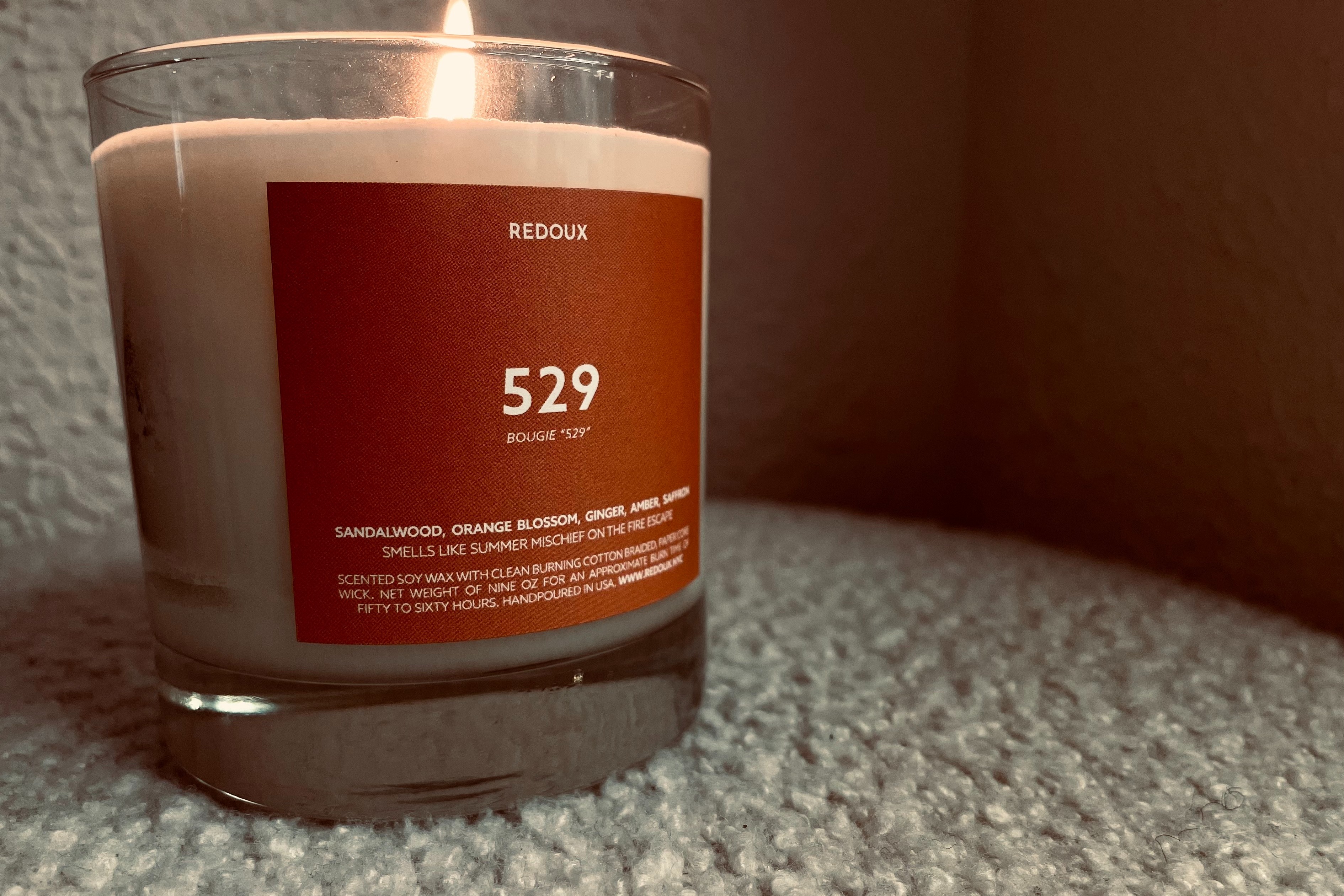 What they say: “Sandalwood, orange blossom, ginger, amber, saffron, summer mischief on the fire escape”
What we say: With nothing but respect to Redoux, this is not a summer scent. It’s a gorgeous late summer, fall-into-winter, sunsets getting earlier, weather getting chillier scent, a perfect balance between warming spices and sparkly, effervescent orange blossom. It’s cozy but… you know those days where you stay home, but you’re super productive? When you know you really should be outside enjoying the weather, but you simply can’t bring yourself to put on pants? This is the perfect candle for a day like that. It pairs beautifully with both a mug of ginger tea, or with cocktails and appetizers, if you burn it with friends over. Please burn it with friends over! 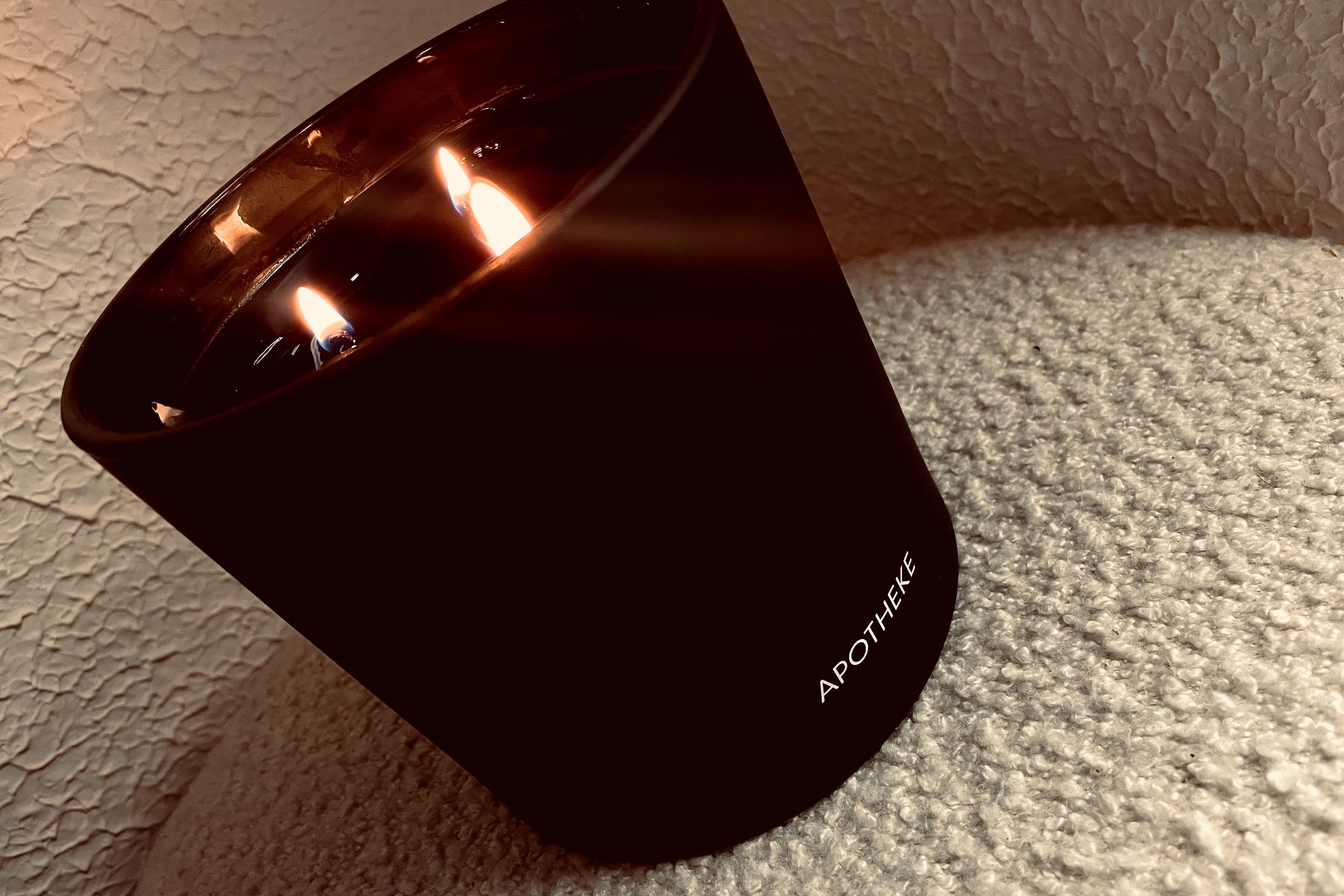 What they say: “Cedarwood and sandalwood combined with notes of smoky amber and oud in a broody, full-bodied fragrance”
What we say: This absolute tub of smoky perfection smells like a charcoal grill. But it also has an underlying fruity sweetness like… cherry? Whatever it is, it’s unique, and elevates the scent from something that could be read as really down-and-dirty outdoorsy. This is the kind of burnt smell that you hope gets caught in your sweater fibers, infusing them with cozy memories that come rushing back every time you slip it on. A Sonoma bonfire in a gigantic three-wick jar. 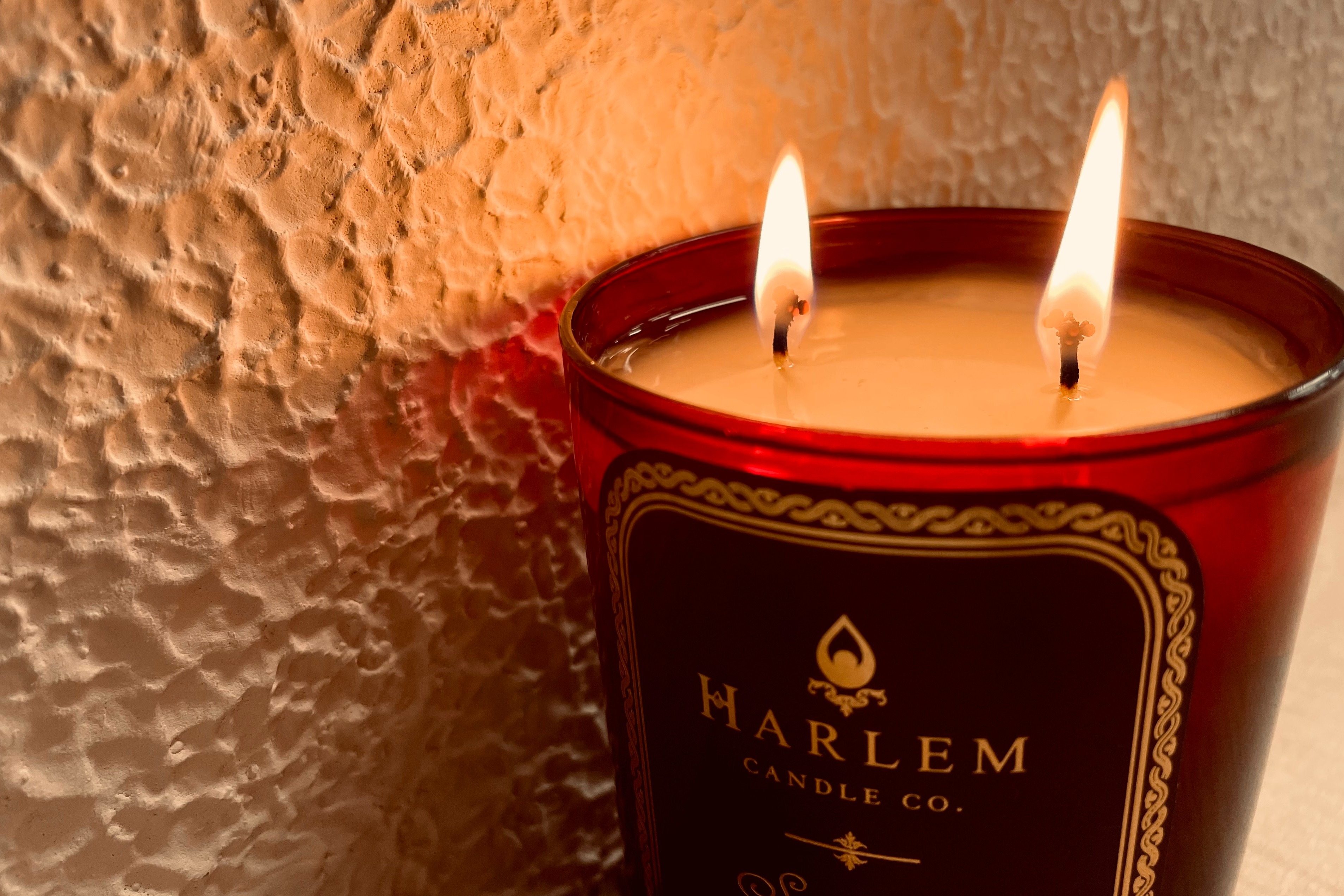 What they say: “The thrill of the forbidden, embodied by sensual flavors of vanilla and dark chocolate, palo santo and tobacco”
What we say: This candle smells way cleaner than velvet couches and indoor cigars. And it’s also a vanilla-forward scent, albeit totally differently than the Joya one above. It’s more reminiscent of the smooth, rich beaniness of a pot of vanilla paste. Smoke and palo santo are also present, but you get the grounding woodiness from them without the heady spiciness. And then there’s also something soapy. Fresh. This is the kind of candle you could leave burning all day without getting a headache. That your friends would say “oh, smells like your house” when they walk in the door. Cozy-lite. 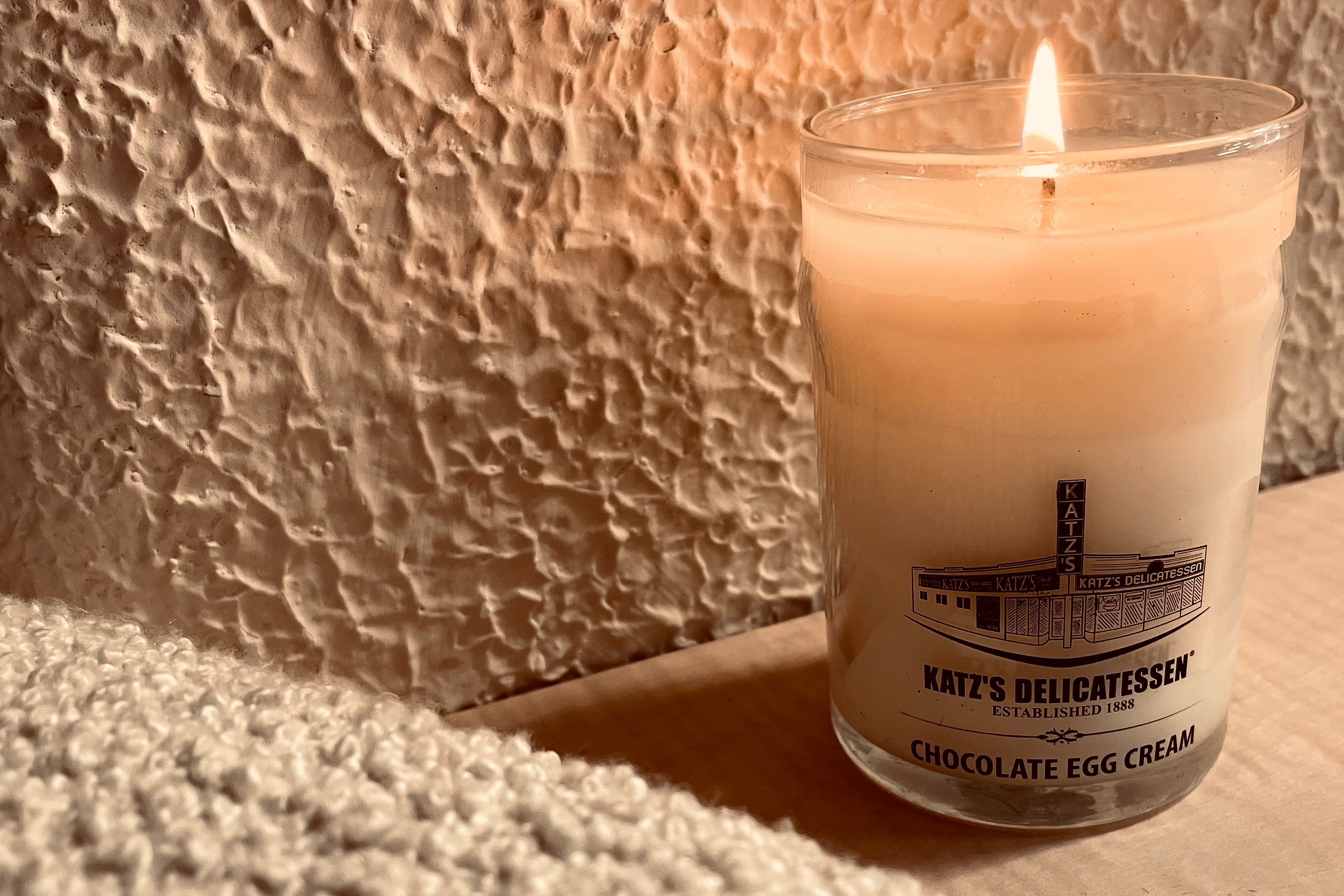 What they say: “Seltzer water and ryegrass, cedar leaf, chocolate syrup, milk, musk, vanilla and tonka beans”
What we say: An essential for Meg Ryan Girl Fall, this candle was inspired by Katz’s deli but doesn’t smell like pastrami on rye, which is probably for the best. Instead, you get a subtle whiff of powdery vanilla and a little Cocoa Krispies, artificial-but-good chocolate. It’s surprisingly delicate, more soft than sweet, and the creamy musk and tonka bean notes give it an undercurrent of “this is a candle” versus “this is an exact replica of a chocolate egg cream.” As a bonus, when you burn it all the way through, you can reuse the vessel as a novelty drinking glass. Pour yourself some Dr. Brown’s Cream Soda! We’ll have what she’s having. 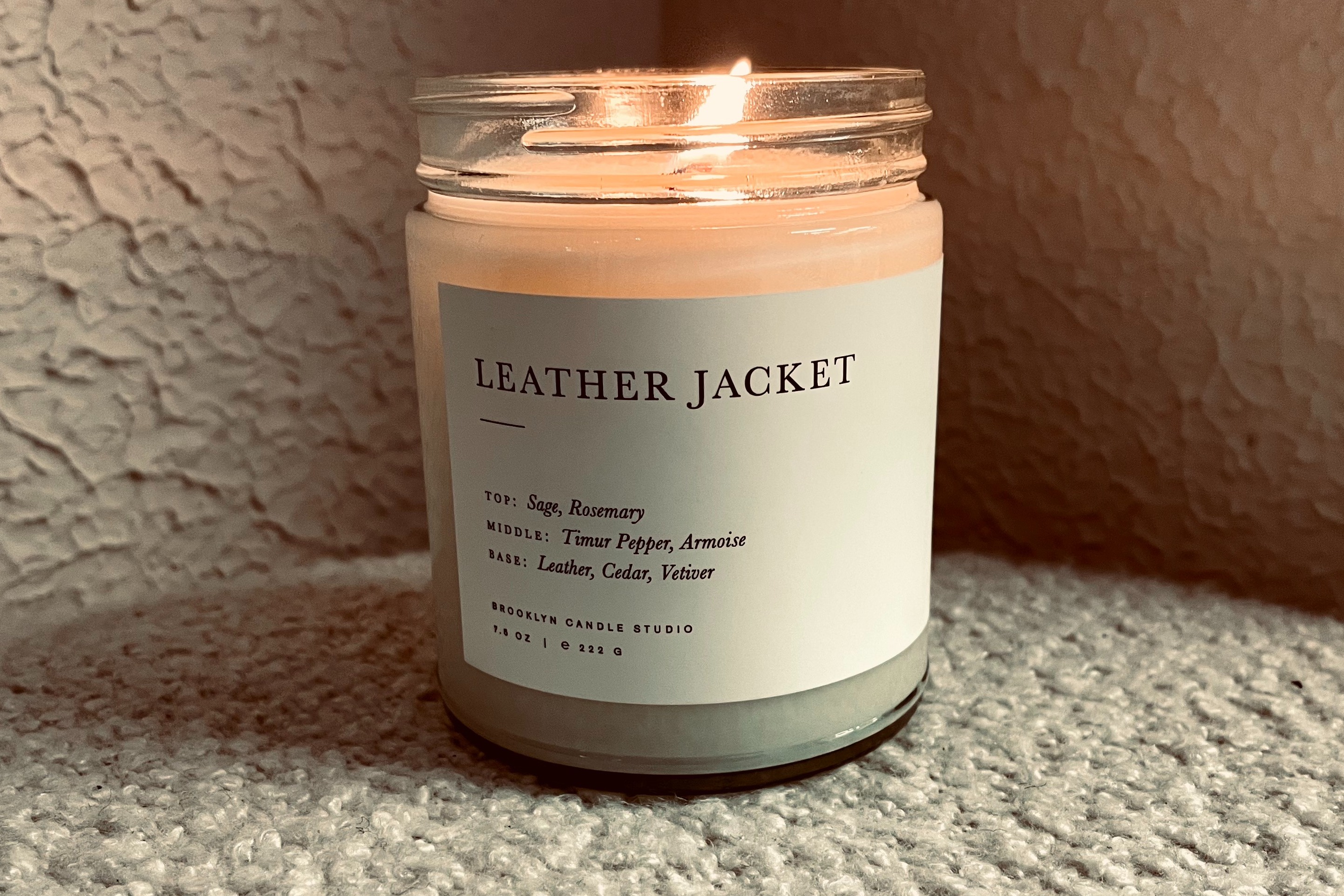 What they say: “Cozy notes of vetiver, timur pepper, leather and cedar”
What we say: The fact that Brooklyn Candle Studio candles are only $28 is truly mind blowing. This one is named for a leather jacket, though we think it smells more like the air outside on the kind of evening that calls for a leather jacket: crisp, perfumed with evergreen pines and sweet sap, dusted in dew. The herby notes of rosemary and sage come through the clearest, making this the perfect swap if you were addicted to minty, basil-y candles in the summertime. Perfect for a Feu de Bois lover who’s looking for something a little bit different—warmer and slightly more nuanced than straight pine. 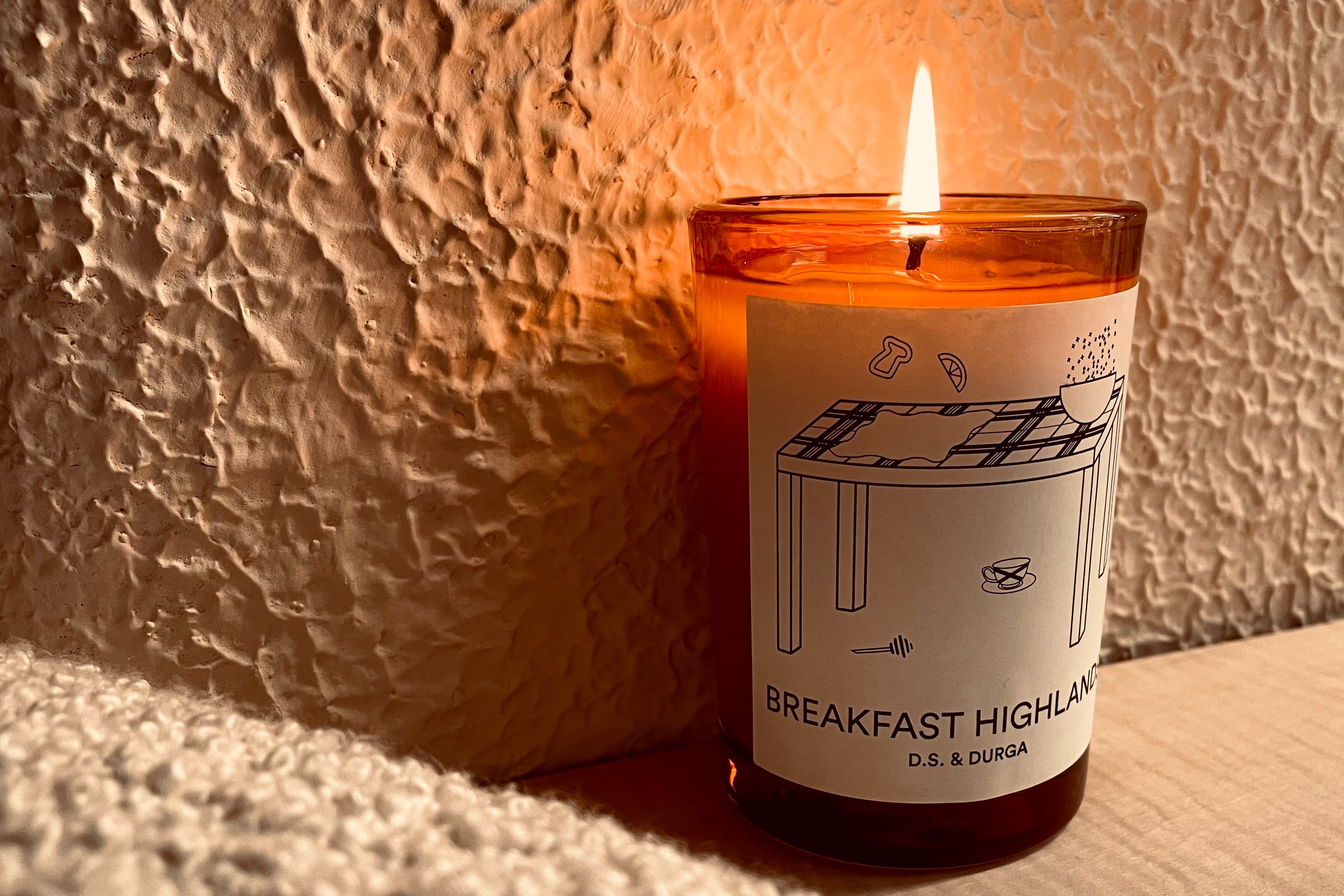 What they say: “A fortifying meal among rolling heather hills, peaceful lochs, and pure highland air”
What we say: This candle doesn’t really smell like breakfast, or like food at all. It smells more like drinking black tea spiked with whisky while the fireplace struggles to stay lit, smoky tendrils creeping out between the burnt logs and you feeling too lazy to top it off. It also smells like you’ve dug your nose deep into the paper of a book—that particular, processed woodiness? It’s unmistakable. There’s also an undertone of rubber or leather too, for some reason, like the inside of a car on a cold day. Maybe it’s the top notes of hay? Either way, this is really lovely! It’s strong-scented and very fall, but a little unexpected. 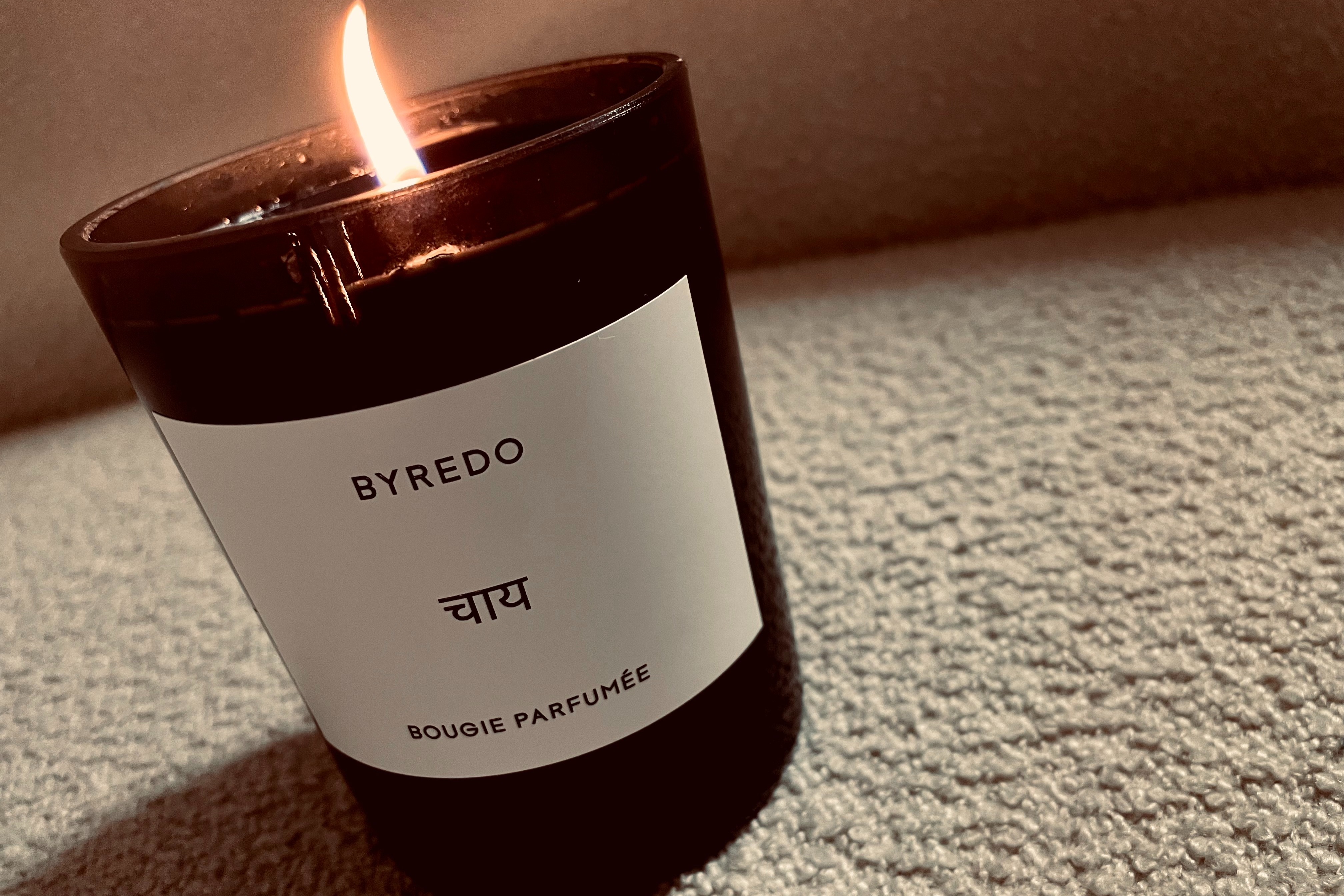 What they say: “A tribute to the tea ritual of the Indian subcontinent… a blend of spices and black tea leaves infused in boiling milk”
What we say: This one, on the other hand, smells like breakfast. Cinnamon oatmeal, more specifically. And guys… it’s so good. The creamy, neutral sweetness makes it stand out—it’s sweet the way oats and milk are sweet, or like the way a baby’s skin smells sweet when you nuzzle your nose into its head. It’s extremely hard to capture. Even trickier to get it to actually project in a candle. But those subtle notes do so beautifully here! It’s also not just cinnamon: warm notes of cardamom and the earthiness of tea (only perceptible while the candle’s burning) round out the scent. Byredo is a splurge, but this is special. 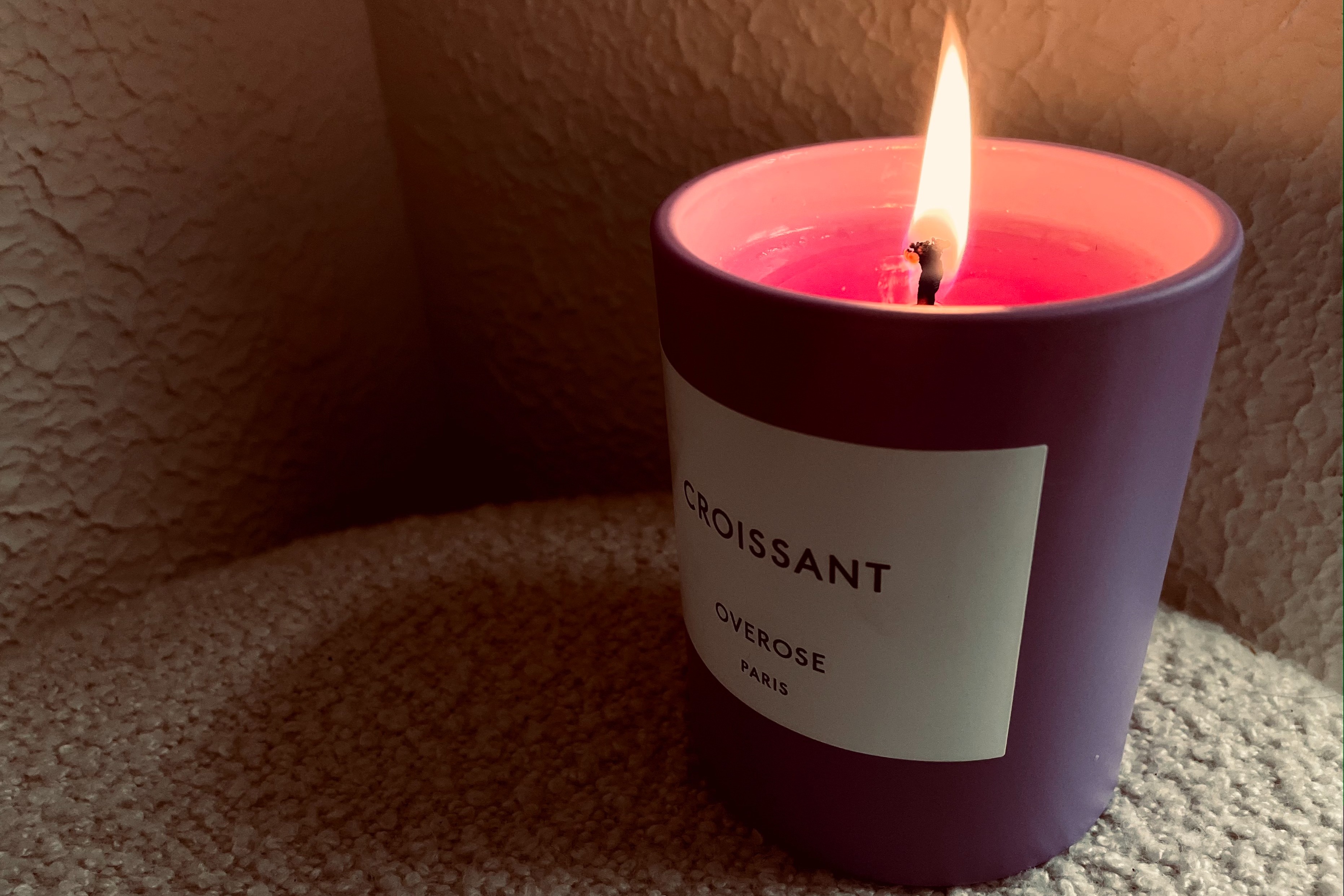 What they say: “The aroma of freshly baked croissants from the bakery at the corner of the small street near the river Seine”
What we say: This is the gourmand candle for people who hate gourmand candles. It doesn’t smell sweet, or focus on the sugary aspect of pastries like many attempts at pastry-scented candles tend to—it actually smells buttery. Like a pat of melted butter smeared on flaky, crispy dough. Like someone in the kitchen just pulled biscuits out of the oven, and you can smell it faintly wafting in the bedroom. What wizardry is this? This candle has kind of a cult following (for good reason) and has been sold out on Overose’s website for weeks. If you’re interested in trying it for yourself, it’ll be back in stock tomorrow.