The first time I got Retin-A, the prescription retinoid also called tretinoin you can only get from a dermatologist, I thought my doctor made a typo—or whatever you’d call the version of a typo where your doc is scribbling so quickly they accidentally add an extra zero after the decimal point. A cream with 0.025% of the active ingredient seemed far too low to be right, so when I texted Emily Ferber to tell her about my new skincare acquisition, I just glossed over the assumed mistake. 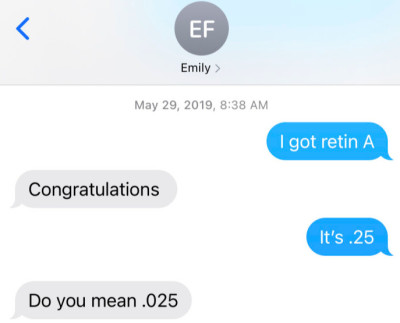 Of course, she and my doctor were right—a prescription of 0.025% tretinoin was strong. I just fundamentally misunderstood the way skin processes different vitamin A derivatives. I hadn’t yet learned about the retinoid chain! (At least, that's what I call it.) When I finally did a few months later, it kind of blew my mind.

The retinoid chain begins with retinoic acid. In most basic terms, retinoic acid is how your body speaks vitamin A. “The skin has specific receptors that respond to and take up retinoic acid,” explains dermatologist Dr. Ranella Hirsch. When retinoic acid is created for topical use, it's called tretinoin. But in over-the-counter products, you’ll see ingredients like retinol or retinyl palmitate instead—your skin can still use these, but it can't understand them unless they're translated into retinoic acid. Some ingredients need multiple steps to be converted, and like playing a game of telephone, with every translation a little bit of the message gets lost. “The strength is weakened in each conversion step,” says Dr. Hirsch, “which is why people get so confused when they look at percentages.” Though it seemed low, my 0.025% tretinoin was still much stronger than a 1% retinol serum. “These ingredients are very much not apples to apples.”

If retinoic acid is the first link in the chain, one link down is retinal. Jump another, and you’ve got good ol’ retinol. And if you keep going one link further, that’s where you’ll find esters like retinyl palmitate. Are you still following? Let’s explore each conversion further.

To make these ingredients usable, your body needs to perform three chemical reactions. That process doesn’t leave your body with lots of retinoic acid to use, unless the ingredient is present in super high percentages to start. Some products actually work this way (take the French pharmacy staple A313, which is chock full of retinyl acetate, retinyl propionate, and retinyl palmitate) but most don’t. And although they won’t give you irritation, products that rely on 3x-removed retinoids won’t give you the same wrinkle plumping, acne busting results of other retinoids either. Dr. Hirsch admits she rarely recommends products that fall in this category. If you’re set on starting with a weaker retinoid, look for products that feature retinyl propionate. Researchers believe it’s the best of the bunch, though some studies at low concentrations show no difference from a placebo.

Retinol is the most common over-the-counter retinoid, so you’ve probably seen it around (or used it) before. With two conversions needed to change it into retinoic acid, retinol is decently potent, but still about 10 to 20 times less so than Retin-A. If you want to see maximum benefits, studies have shown you’ll have to use a retinol serum for six months. Many retinol products are padded with other actives like AHAs and niacinamide, which can speed up visible reductions in breakouts and discoloration. They can also bump up the price of your serum. A budget option is Neutrogena’s Rapid Wrinkle Repair Cream, which is Dr. Hirsch-approved and only 30 bucks at the drugstore. And if you’re particularly concerned with redness, she suggests spending a little more on a retinol serum boosted with calming ingredients. “First Aid Beauty’s Retinol Serum has ceramides and colloidal oatmeal, which help counteract irritation,” Dr. Hirsch explains.

If you’re looking for faster, more intense results than retinol with less irritation than a prescription cream, look for a retinoid that’s only one conversion away from retinoic acid. You’ve got a few options here. The first and most abundant, product-wise, is retinal. Dr. Hirsch likes Avène’s Retrinal 0.1 Intensive Cream, and also recommends the Allies of Skin Retinal and Peptides Overnight Mask for a more indulgent treatment. The second ingredient in this category is the gradual-release retinyl retinoate. It’s a good option if you’re looking for something strong that won’t cause irritation. And finally, there’s hydroxypinacolone retinoate—no need to try to pronounce it, because most brands just call it granactive retinoid. “The big dog in this category is The Ordinary’s Granactive Emulsion,” says Dr. Hirsch, explaining that the cheap serum tends to be a hit or miss with users. “Some people love it, some people loathe it.”

Right On The Money

Congratulations! You’ve reached the end of the retinoid chain—or the start of it, depending on whether you’re the glass half full or half empty type. Your skin understands tretinoin, adapalene, and tazarotene as retinoic acid, and they can each bind directly with its retinoic acid receptors. In other words, with no conversions necessary these guys are strong. Adapalene is the only one available at the drugstore without a prescription, and for a long time your only option was Differin. Now, La Roche-Posay and Proactiv make products with adapalene, too. Since adapalene is a synthetic retinoid, it's less likely you’ll experience irritation with it. For chronic acne, prescription-only tretinoin will be particularly helpful, and prescription-only tazarotene is best for treating psoriasis.