Tomatoes Are The Best Part Of Summer

My favorite summer activity is waking up early on a Saturday morning, taking a shower, slipping on a dress that doesn’t touch any part of my body, and walking to the farmer’s market. Wet hair on my shoulders and empty tote bag in hand, I’ll walk for 40 minutes just to see the tables piled high with vibrantly hued in-season vegetables. It’s a purely aesthetic appeal—I let my eyes guide what I buy, and I often end up leaving with things I don’t know how to cook. Also, too many tomatoes. Powdery-skinned heirloom tomatoes the size of a softball with wrinkles like a bulldog. Taut-skinned cherry tomatoes streaked with red, green, and yellow in a big bin like candy to pick through. Tomatoes connected in a chain still perfectly attached to the vine. The smallest, roundest tomatoes so perfect that you wonder whether you’re supposed to pop them into your mouth like boba or wear them like pearls. I lift each to my nose before plopping it in my tote, a behavior I’ve stolen from seasoned-looking shoppers who seem to be culling something more from each sniff than a deliciously sweet tomato smell made stronger by sitting in the sun. But I can’t do any of that this summer, so I’ve been burning tomato candles instead.

No two tomato candles smell alike—I don’t think fragrance makers can agree upon what, exactly, a tomato smells like. So “tomato” on a candle label is more or less a secret signal that what’s inside smells really, really good. Some of them are fruity, some of them are grassy… but they all smell like summer. Here are my favorites: 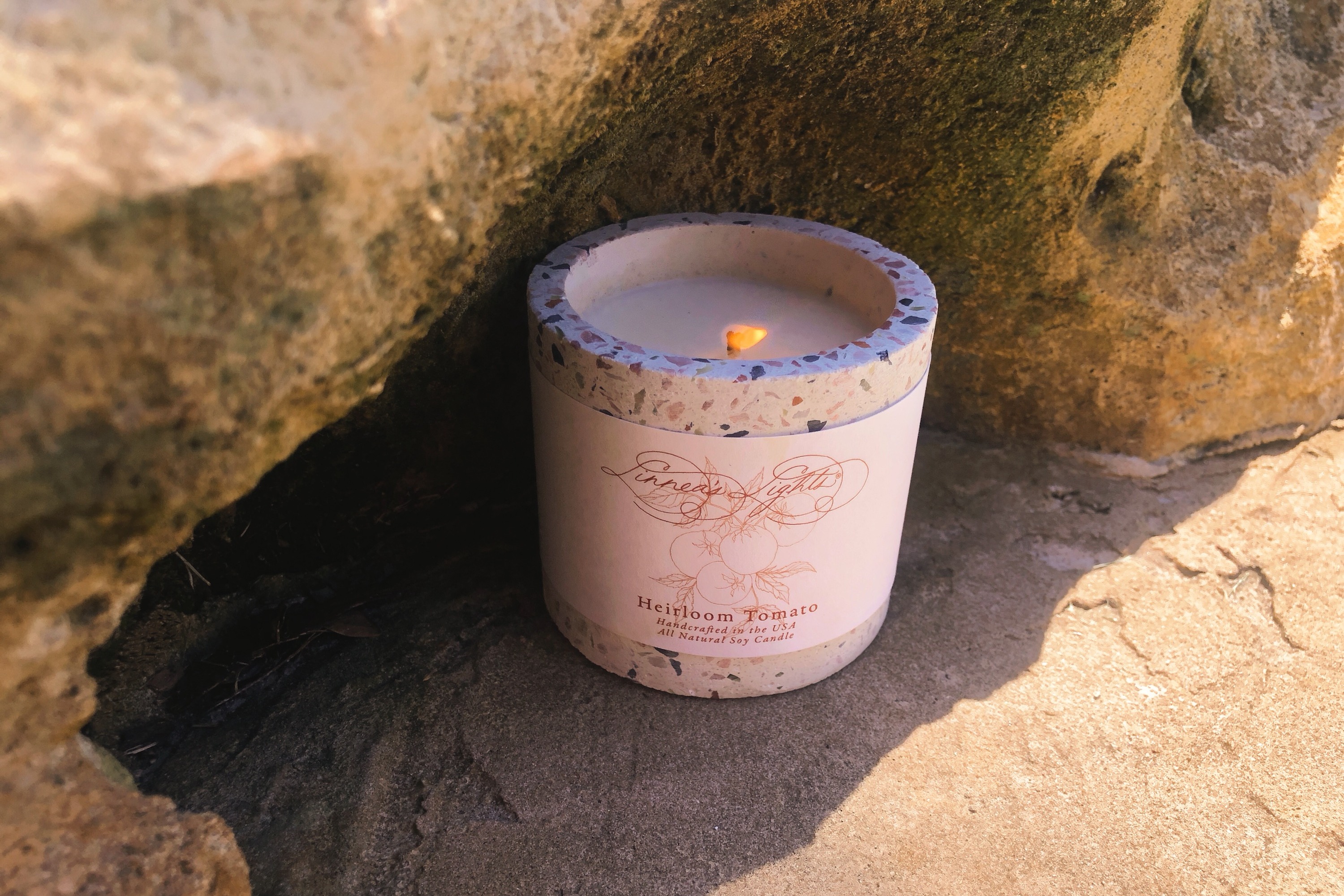 A fun fact: in 1893, the Supreme Court ruled that, because of their culinary application, tomatoes should be considered vegetables. But as any smart-mouthed kid will tell you when presented with a plate of Greek salad, tomatoes are actually fruits. Little, red, flower-sprouted, seed-bearing fruits. Linnea’s Lights seems to follow ye olde definition, because their version of a tomato candle is decidedly fruity, not vegetable-y. A touchstone would be Diptyque’s Baies, but it’s not a total clone. Alongside that rich, familiar tanginess of currant, you get a bright, green note of stems and the blunted sweetness of a tomato that’s been sitting in the sunlight. And then, once it’s lit, there’s an added smoky earthiness that grounds the whole thing. On first sniff my eyes rolled back into my head with pleasure—has that ever happened to you before? Plus, beyond the scent, the brand is woman-owned, the candle is genuinely affordable ($24!), and the terrazzo jar is begging to be reused after I inevitably burn it through. If you’re hesitant about tomato candles, start here.

The One To Light Before A Bath: 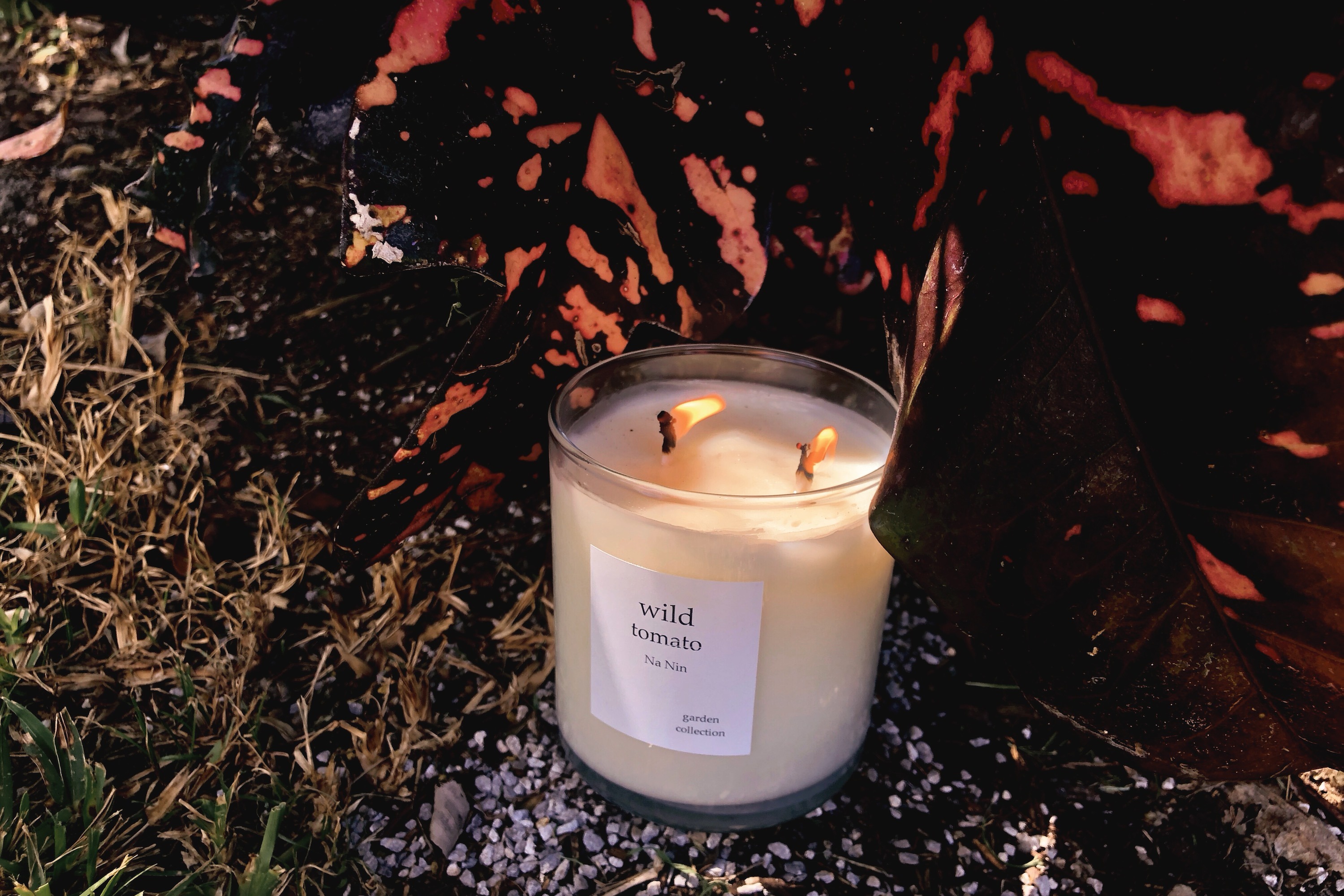 Na Nin’s take on tomato is all about balance. It’s fruitier than a floral, summery but not citrusy, peppery without spicy heat, and fresh without being cloying. The clean and mild opener brings to mind the sugary white sap that oozes out when you split a stem in two. As it burns the juiciness comes out, but not in a grating, nauseating way… more watery than that. Crisp. Like the first bite of a yellow cherry you washed and put in the fridge, or a crunch of watermelon, it’s the kind of refreshing juiciness you’d welcome to run down your chin. Actually, it has everything I love about a fig candle, except it doesn’t smell like fig. (And if you hate fig but have a sweet, plant-y itch only fig can really scratch, the smell of pure tomato vines might be your solution.) The candle is on the subtle end and doesn’t have the strongest throw, but a small humid room—say, a bathroom—can sharpen its reach. Every time a perfectly blended whiff hits your nose, it’s heaven.

The One To Burn In The Backyard: 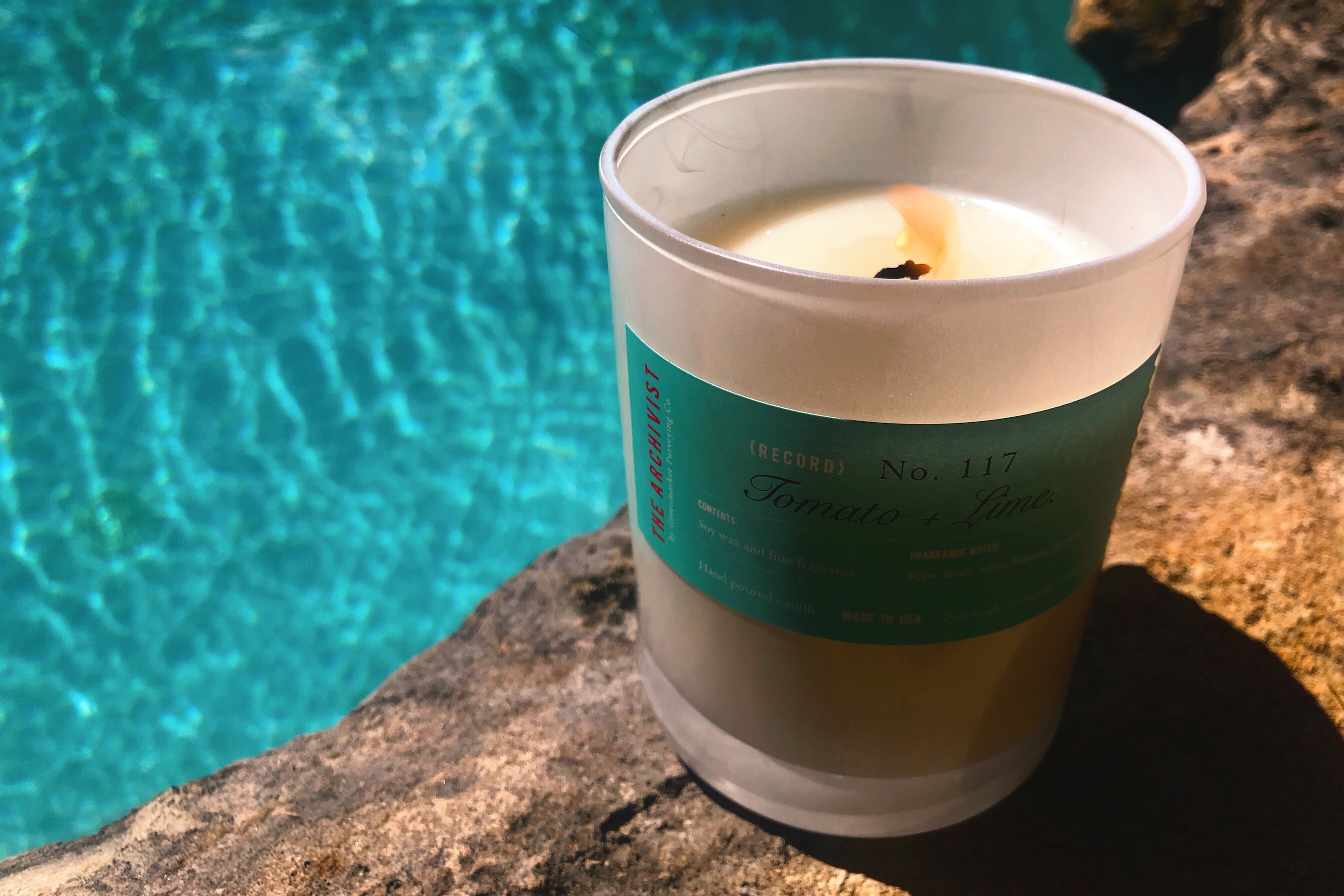 Tomato plays the sidekick in this candle that’s anything but a one-note wonder. Before it’s lit, you'll recognize a strong lime scent and some almost milky notes. But the candle is really activated by flame—after a few minutes of burning, the lime gets subdued, softer somehow, and other notes of vine and spicy herbs spring up. Give it another sniff, and mild tomato-y notes pop out. It’s a unique, unexpected harmony (the tomato blending together the tangy lime and grassy parsley into something distinctly summery with a hint of I-don’t-know-what) that pairs particularly well with a warm night and a pitcher of margaritas. The powerful throw means you’ll still smell it when you light it outside (even though it’s magically under 30 bucks), so it’s perfectly suited for a socially distant backyard picnic with friends.

The One To Keep At Your Boyfriend’s: 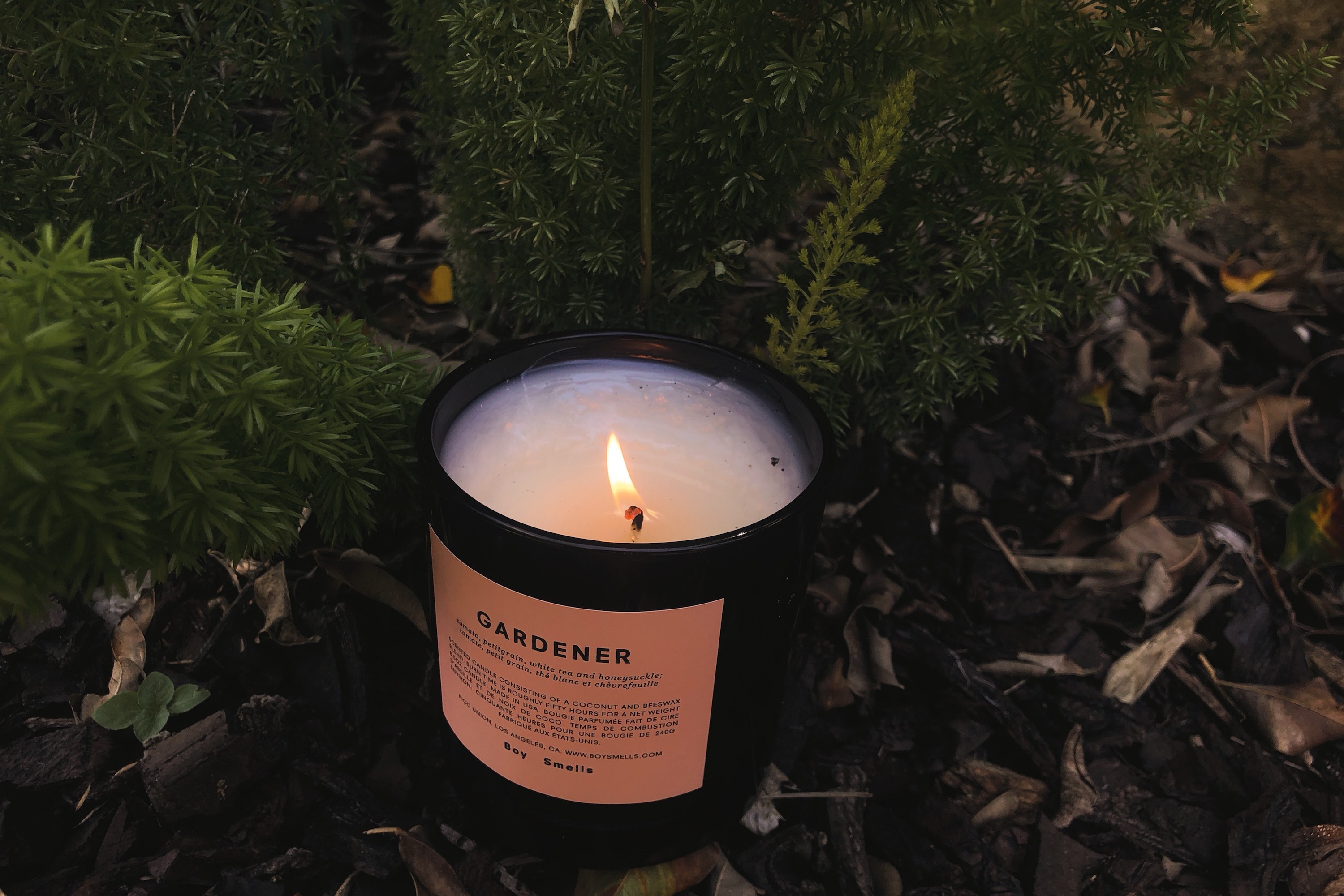 It’s not because the brand is called Boy Smells. No, this tomato candle just smells decidedly more masculine than any of the others on this list, though the list of notes reads particularly sweet: tomato, petitgrain (the leaves and twigs of bitter orange), white tea, and honeysuckle. A lazy review might say this smells like a man’s cologne. But a more nuanced one reads like this: the heady, crisp tea and honeysuckle race up your nostrils first, followed by an almost licorice-y bitterness like freshly snapped plants. The tomato ambles slowly and confidently behind all the other notes vying for your attention—actually, it only presents itself at the moment right before you exhale. Which is maddening! And makes you want to keep breathing deeply to catch sweet juiciness just for one more second! Suddenly you’re addicted to breathing, and there’s nothing you can do about it except keep Gardener lit and in your vicinity.

The One For Tomato Lovers Only: 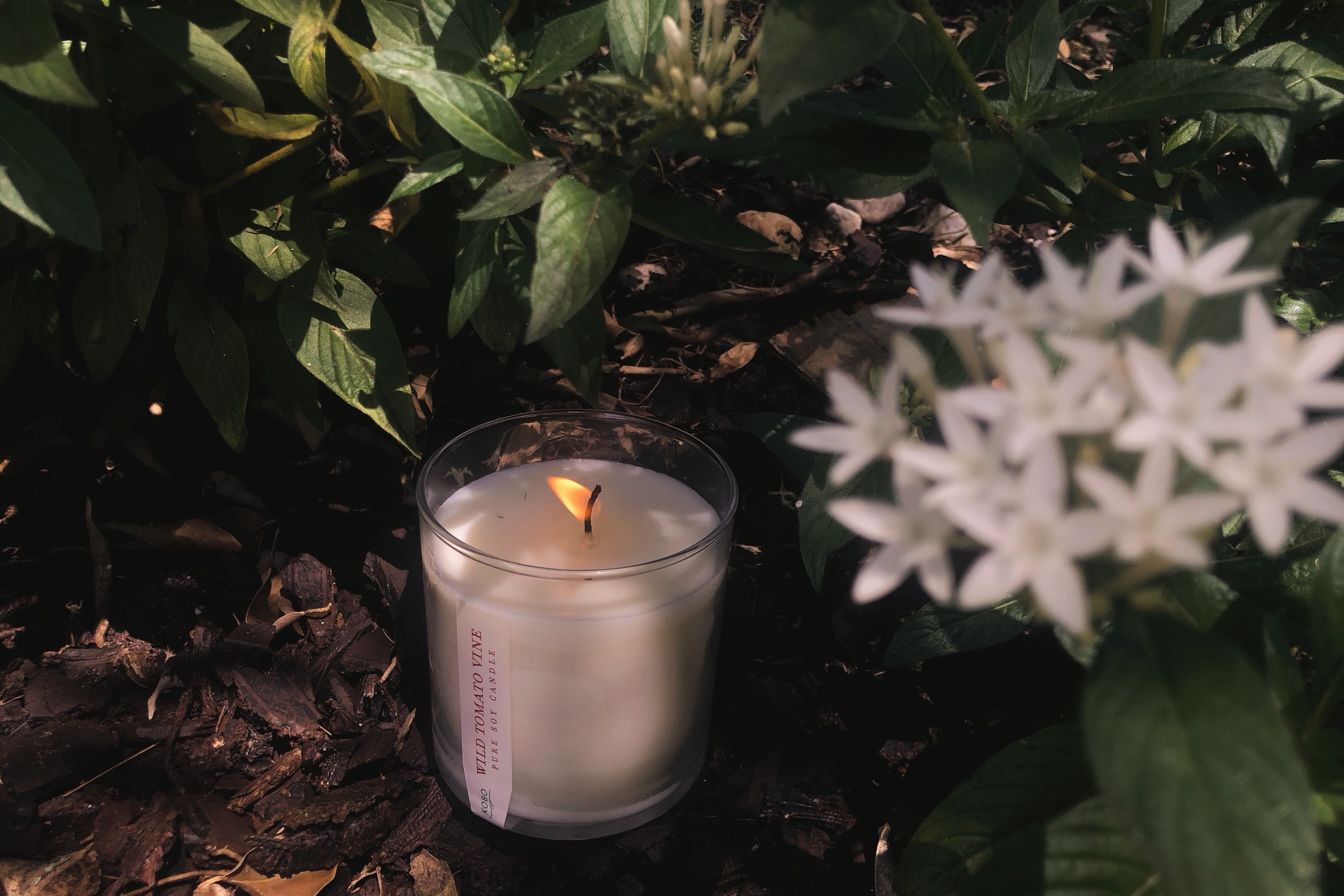 First of all, let’s take a moment for Kobo. Have you heard of this brand before? They make a few different collections at different price points, but you can get a nuanced, beautiful-smelling candle for around $20 without any of the overt, gourmand sweetness you might expect from something so cheap. You honestly can’t go wrong—but I digress. I’m here to tell you about their Wild Tomato Vine candle, which relit a spark of love that previously only Cire Trudon’s basil-y Abd El Kader could kindle—if the previous candles smelled like vine or the warm flesh of a tomato sitting on a farmer’s market table, this one takes a perfect, juicy tomato and cuts it right open. Taking a deep whiff with my eyes closed makes me feel like I’m sitting outside with the world’s best caprese salad in front of me. The tomatoes are sliced and marinating in salt, the spicy basil freshly torn by capable hands, the creamy burrata cooling everything down. It’s licorice-y and bitter and a little dirty at the end, to temper any idea of being overly sweet or overly green. Essentially, this candle is the platonic ideal of a tomato. Light it in the kitchen (it’s one of very few candles suited for it), or any time you want to indulge in pure summer fantasy.