“I grew up in Brownsville, Texas, which is a border town, and from a very, very early age I wanted to be in fashion. My parents didn’t discourage me, but they definitely encouraged me to do something else. I went to college in Illinois, and there was no strategy to that—I didn’t even visit campuses. And U of I was nice, but it’s not exactly the right place for fashion. One year into it I went to FIT to take some different courses, and ended up getting an internship at Cynthia Rowley. I went back to school and consolidated the last two years of education into one, hurried back to New York, and got a job as her trim buyer. Most people would leave around 6PM every day, but that’s when I went into the design room. I’d say to Cynthia, ‘I’m done with my trim buying, how else can I help?’ and eventually I became more integral to the organization.

CAREER
I met Rebecca Taylor while I was working at Cynthia Rowley, and eventually we left together to start a new brand. As CEO of Rebecca Taylor, I was playing a role, and eventually it started depleting energy in other areas of my life. A good example of that is I wore my hair pulled back almost every day—I was trying to look put together. Now when I think about it, I wonder: was I was trying to look put together because I didn’t feel put together? So in 2015 I left to start Foundrae, which was very much an unfolding of who I really was. 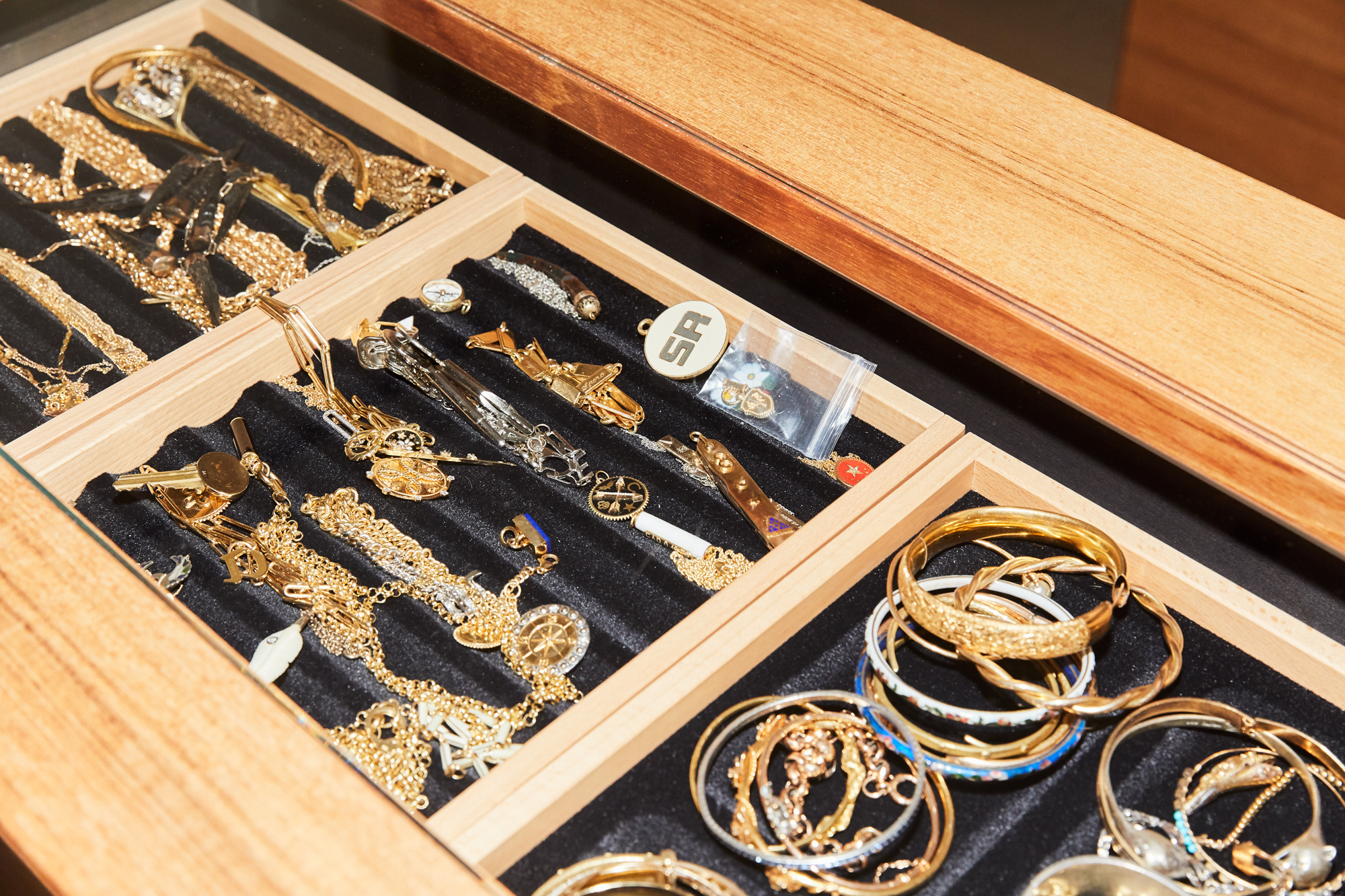 I had been so used to creating decks for private equity people at Rebecca Taylor, so I actually created a deck for myself about the creative vision and intent of Foundrae. From the beginning, I had the symbols. And then I knew the aesthetic I wanted, which was definitely more Victorian and Arts and Crafts. I like layering, because I feel like that is a metaphor for how layered and complex we are as people. All the medallions should be equally important, which means they had to show, so we started off with extension clips. All of that really defined the aesthetic of Foundrae, and the rest was trial and error—we walked back and forth on 42nd Street until we found jewelers who could do the kind of work we wanted to do.

JEWELRY
Jewelry has always defined my style—I always felt like I had defining moments that would either start or end with jewelry. Like, in high school I had a snake ring I wore every single day. On my last day of high school, my snake ring broke in half from the back, and I really felt like that was symbolic of the end of an era. I had a boyfriend where, right before we broke up, I lost a piece of jewelry that he had given me… I always feel that these things are symbols. But I never had a budget to get really great pieces.

Jewelry has always defined my style.

I was a silver person growing up, definitely because I lived on the border of Mexico but also because it was less expensive. And then I would do a lot of antique shopping, and started to mix gold and silver. Mixing metals has to feel intentional. I’m still crazy about eBay, and vintage shopping. You can get very similar looking ones chains to the ones I’m wearing that are Victorian watch fobs. The difference is they’re nine karat or they’re hollow, so they don’t have the weight, but visually they’re really great.

SKIN
I started going to Rescue Spa, and it has been so helpful for me I can’t even tell you. I deal with dryness because I’m aging, and redness. And right away my aesthetician Alina said to me, ‘You wash your face with hot water, don’t you?’ I did! That was what was causing me more redness. So now I use the Biologique Lait EV soap with cool water. Then I use P50 1970 V, and since I started using it I have not had problems with blemishes. I really am a good rule follower, so I use it twice a day. Afterwards I put this Serum Amniotique on, which I think neutralizes the acid. It makes my face stop tingling. It’s funny, they sometimes give me samples of different serums, and the other night I put one on without really looking at it. My daughter is really sensitive to smell and was like, ‘Wow! You stink!’ I went to check what it was called and it was called Placenta. Maybe that’s... literal? [Laughs] I have the Elastine one too, but I stick with the Amniotique usually. In the morning I follow that with the MSR H cream, and at night the Creme Verte Espoir. I love how it smells like oatmeal—it makes me feel very calm, and nurtured. 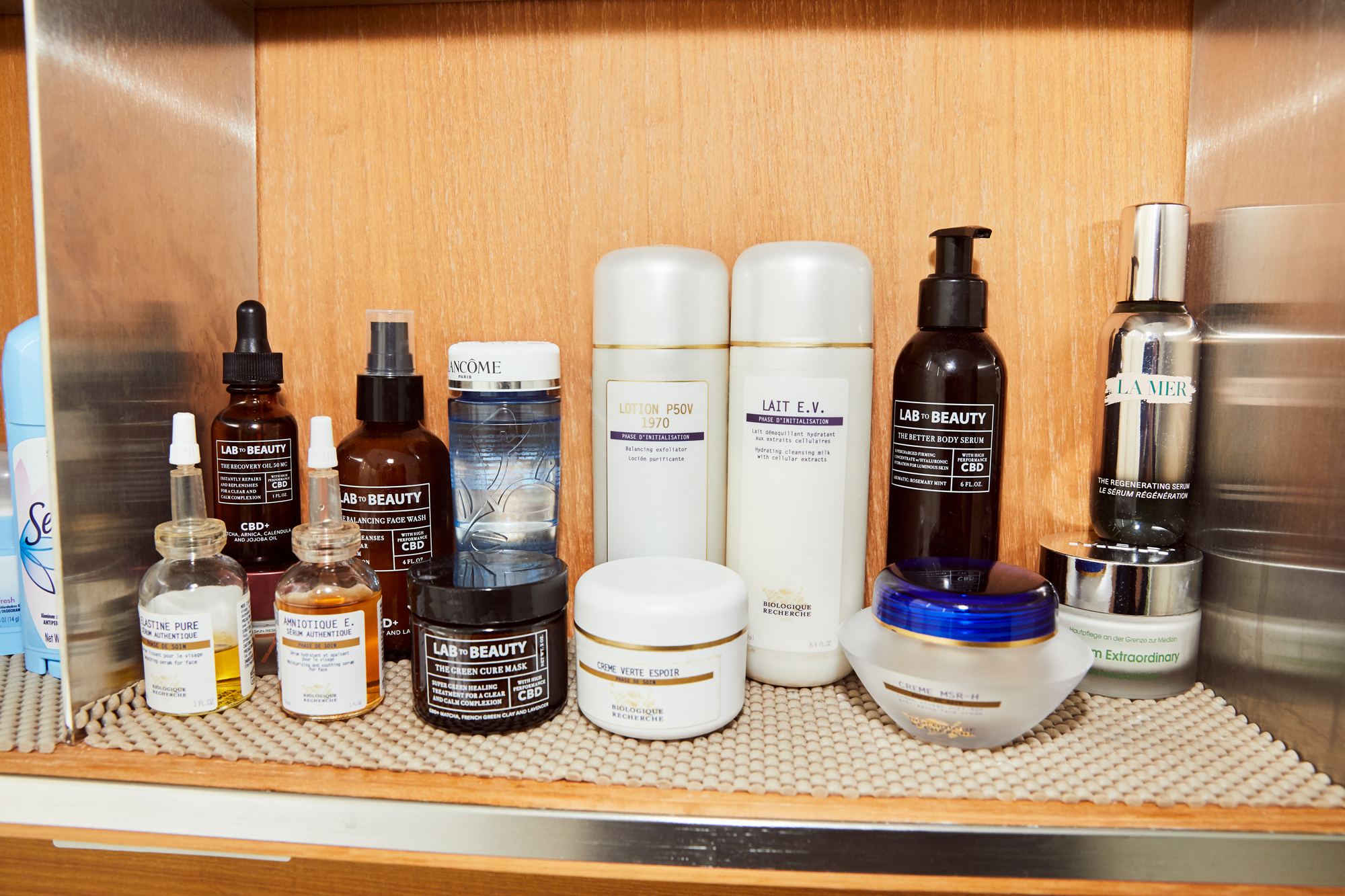 MAKEUP
When you wear this much jewelry, you can’t really do a lot of hair and makeup without being totally over the top. I always just do a very bold eyeliner, Chapstick, and coverup. Every time I get my makeup done professionally, they say to me, ‘I’m going to take your idea of the eyeliner, but I’m going to make it less harsh, and soften it up, and I’m going to give you just a little bit of color on your lips.’ And they always put blush on me, and I look so much better. [Laughs] Seriously, when I get my makeup done everyone always tells me how good I look. But I’ll hear that I should soften my eyeliner, and then the very next day I’m back on the thick line. Maybe I should have more color, or be softer, but it’s just who I am. So I purposely did my makeup today exactly how I wear it every day.

I get the most creative with my eyeliner color. I’m not loyal at all. Every couple months I’ll go to Sephora and pick up colors that look interesting—right now I’m wearing a Sephora Purple eye crayon. I like this Lab To Beauty lip balm, which has CBD in it and kind of tingles on your lips. Then I’ll define my eyebrows, because my hair is getting more gray so without anything they’d disappear. I use Glossier Boy Brow in Brown and an Hourglass brow pencil, but I’m not loyal there either. Where I’m really loyal is with RMS Un Cover-Up concealer. Romy told me to get it, and she was so right. It really helps me. I always put it around my nose, and then anywhere else there’s a red mark.

Maybe I should have more color, or be softer, but it’s just who I am.

HAIR
I fought against my natural texture my whole life. I just wanted smoother, more in-control hair that looked like I brushed it. But I don't have that hair. Now I’ve just been going with it, and I’ve found it works better for me. I wash my hair once a week, and I’ll brush it right before I get in the shower so I can get the conditioner through it easily. That’s the only time I brush it. I shower in the morning, because I find my hair is best when I leave the house with it wet. Then I’ll wear it like this the second, third, and fourth days, but a little tighter on the fourth day because it needs a little control. That’s when I’ll use a styling wax like the Bumble and Bumble Sumotech, just in the front. On the fifth day I’ll either put it in a bun or a ponytail—I have a million Goody hair ties, because they always disappear. Then I start all over. This is day two hair.

Sometimes I’ll do a hair mask. I’m not good at actually using them, but I probably really need to. I get my hair colored and cut at Marie Robinson, and the Christophe Robin Prickly Pear mask is something my stylist kindly suggested to me the other day—when people try to help you, I feel like I should listen. I like it, but when I run out I’ll probably just get something from the drugstore. Since I leaned into my natural texture, styling cream has become critical. I swear by this Moroccanoil Hydrating Styling Cream, and I’ll go in and scrunch it into my hair while it’s wet. It doesn’t make my hair look crunchy, but it separates it. 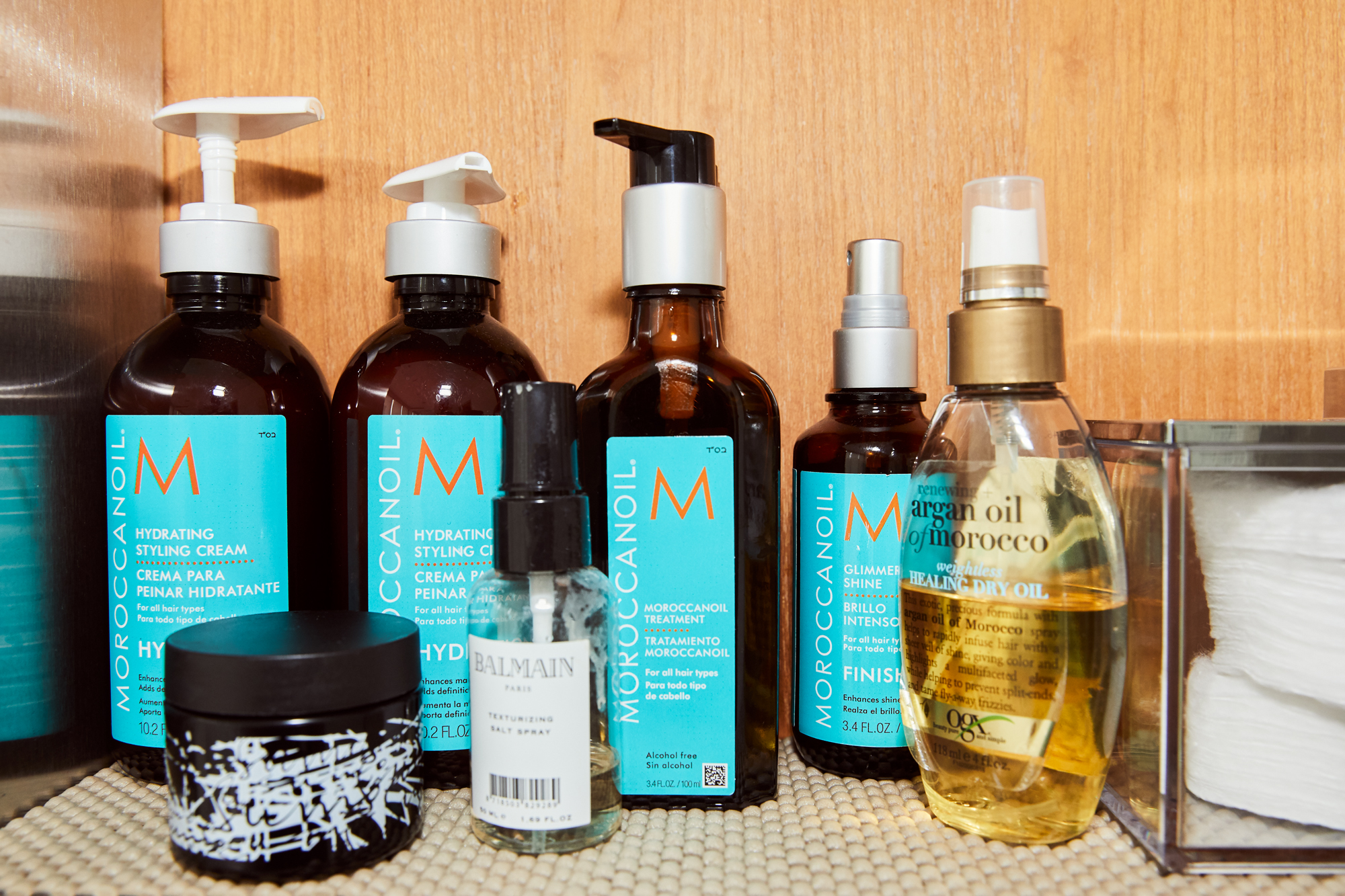 NAILS
People would probably think that my nails are a big part of my style, but they definitely weren’t before I started making jewelry. I would never have my nails painted—they would always be bare, and short. But then I started wearing a lot of Foundrae rings, and I felt like it was almost disrespectful to other people not to have my nails done. Or, it seemed like they kind of expected it from me. I had to come up with a way to paint them that felt authentic to me, so this is what I’ve been doing. I have no base, so they can grow out and it doesn’t matter, and then I put a symbol on them with these Sally Hansen I Heart Nail Art nail pens. They sell them at Target in all different colors. Sometimes I just do one single line—that’s it. Other days I do a dot and a dot. One time, a model came to set when we were shooting rings, and her nails were a mess. I had her take off all her nail polish and I put little dots on her nails—I didn’t even do all 10, maybe two on one hand and one on the other. It looked really good. I think it just makes my nails look intentional.

I started wearing a lot of Foundrae rings, and I felt like it was almost disrespectful to other people not to have my nails done.

CANDLES + FRAGRANCE
I get candles everywhere I go, and they’re like a beauty practice for me. I usually have incense, too, and maybe I’ll light a piece of wood. The candles change, but I always really like nice matches. These are from HomArt—I just got them on Amazon.

It’s so unlike me to buy a random perfume. I’m not educated about perfume, and sometimes I’ll get something that I really don’t like. Like, I bought this Hermès one when I was out with my husband one day, and in the moment it smelled good, or, I thought it smelled good. Then I got it home and was like, ‘Who am I?’ I don’t like it at all. My kids gave me Chanel Gardenia, which I would say isn’t really my scent. It’s too strong for me. But I have three perfumes I actually wear. I wore Chanel Mademoiselle for like 10 years, and haven’t been wearing it as much recently. I love Byredo’s Rose of No Man’s Land. And I really like this new one, Marfa from Memo—that’s the one I use all the time now. I want to say they smell kind of sensual to me, but I would love to know, from somebody who knows what they’re talking about, what the three have in common.”