I’ve been on the prowl for vintage perfume vials ever since a collection of ornate antique scent and snuff bottles on view at LACMA fanned the flames of desire. Wearable scent-jewelry hybrids trace back to Ancient Egypt and were ubiquitous throughout the 19th and early 20th centuries when fragrance was seen as a hygienic imperative, not just a decadent elixir. I find that aside from being a classy, old world, and rather audacious way to carry around your scent (encased in a piece of fine jewelry), there’s something talismanic that happens when you decant your fragrance into a vial, stripping it of its branding and transforming it into something far more personal.

I’ve gotten lucky finding beautiful Mexican silver vials at scent fairs, flea markets and vintage stores (then scrambling to find microscopic chemistry lab-grade funnels to complete the transfer). Etsy also has a dizzying selection of old and new finds, sometimes regretfully crossing over into the territory of its enfant terrible counterpart: vials on chains meant to stash an intoxicant of a different kind. Lots of people collect Tiffany & Co.’s versions: pendant vessels shaped like rounded flacons, scallop shells, and of course, a heart. But recently stumbling onto designer Andrea Vargas Dieppa’s Monolito Instagram had me in a full body spasm of delight: square after square of oversized-yet-wearable sculptures that presented a distinctly modern take on the historical keepsake. If I’m going to take the tradition into the 21st century, I’ll do it with these bold future heirlooms: dice-like stacking silver cubes meant to be worn as a ring, or conjoined gold orbs dangling on a long cord. 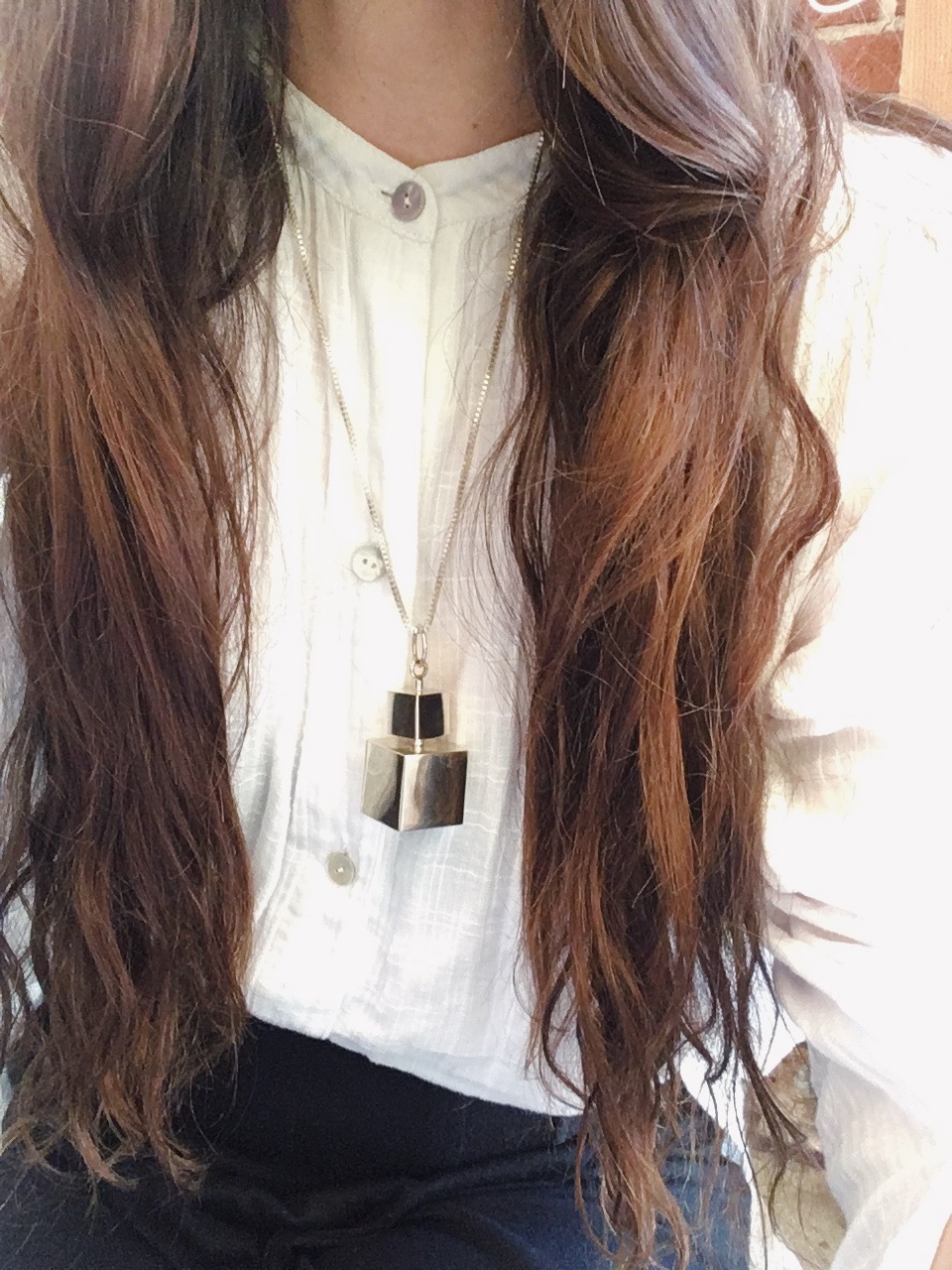 If the designer’s name sounds familiar, it’s because Dieppa co-founded Dieppa Restrepo, a shoe line known for its gentlemen-style oxfords and loafers in luxe materials. Dieppa left three years ago and moved back to Bogotá, Colombia to work on the interiors of a cocktail bar with her now-husband. She started Monolito, a nimble design studio predicated on the exhilaration of creating custom elements (monolito means monolith or one stone in Spanish). Having found extremely skilled local artisans to create sculptural-accented tables and chairs for Quilate, the cocktail bar project, Dieppa simultaneously developed a prototype for a perfume vessel inspired by Pre-Colombian motifs. “At first we were doing a really big bottle, but I noticed that one of the jeweler artisans I was working with had all these small molds, like cubes and spheres for spoons, so I said let’s just make it in miniature,” explains Dieppa, citing her lifelong obsession with collecting miniature items. Each vial takes about 15 hours to make, and houses 5-7 ml of fragrance when filled. For reference: a sample vial tester of fragrance that might already be in your dopp kit holds 1-2 ml.

The Monolito vials, in precious metals, aren’t an impulse buy, but they are refillable and come with a tiny metal funnel. Further intriguing, they arrive pre-filled with a custom fragrance called Shandy Shandy, the result of a collaboration between Dieppa and French master perfumer Barnabé Fillion. If you’re going to take a chance on a new scent without being able to smell it elsewhere, you’d want it to be by the same nose behind Aesop’s Hwyl and Marrakech Intense fragrances, Le Labo’s Geranium 30, and Paul Smith’s Portrait. Shandy Shandy is alluring in a way that is reminiscent of the best of Aesop’s signatures: tasteful and herbal with a warm ambery base, a woodsy incense of the most compelling variety. The herbal quality is from top notes juniper and long pepper (a very distinct and pretty note) and the ambrosial base comes from frankincense and myrrh. I came for the vial, but I stayed for the scent.

Monolito vials were designed with a “mischievous spirit,” since Dieppa says “no one would guess there’s anything inside.” As you carefully unscrew the adjoining pieces, the top has a pointy metal applicator, which you then press into the skin wherever you like. Thus, the scent doesn’t throw or announce itself (as it would if it were heavily spritzed); it thrums on the skin like an intimate secret, only heightened by the fact that you dab on a bit at a time.

Dieppa also points out, beyond being sustainable and reusable, they are very practical. “You can take your favorite scent everywhere, even on a plane. Mine [in alpaca silver] didn’t even sound off the metal detector at security.” The vials can be cleaned in between fragrances by flushing them a few times with rubbing alcohol. I can’t stress enough how well-advised a chance on Shandy Shandy would be: your new secret potion. Then refill with your Tam Dao, your Molecule 01, or even the peppermint-eucalyptus blend your sinuses have relied on all winter (I’m looking at you, Olbas).

Photos via Monolito and the author.