I’m back! My inexplicable hiatus from the world at large can be attributed to the fact that I adopted a dog. And not just any dog! The Glossier Dog, if there ever was one. It went like this: Cherie from Glossier's People Team was fostering a coquettish, seven-week-old chihuahua mix via Muddy Paws Rescue. Emily posted this puppy on Instagram, and within seconds I texted her, demanding she let me meet him. During our first encounter, he sat roundly in my lap and attempted to gum at my thumb. His ears smelled like cashews. His yawns were slight and hapless. His belly was pinker than undercooked chicken. He weighed as much as a grapefruit. I applied to adopt him that night. A month later, I took him home and we started our lives together with 36 hours of uninterrupted barking.

I’m thrilled to introduce you to Orson Gotham—my pride and joy—and a few of his favorite things. 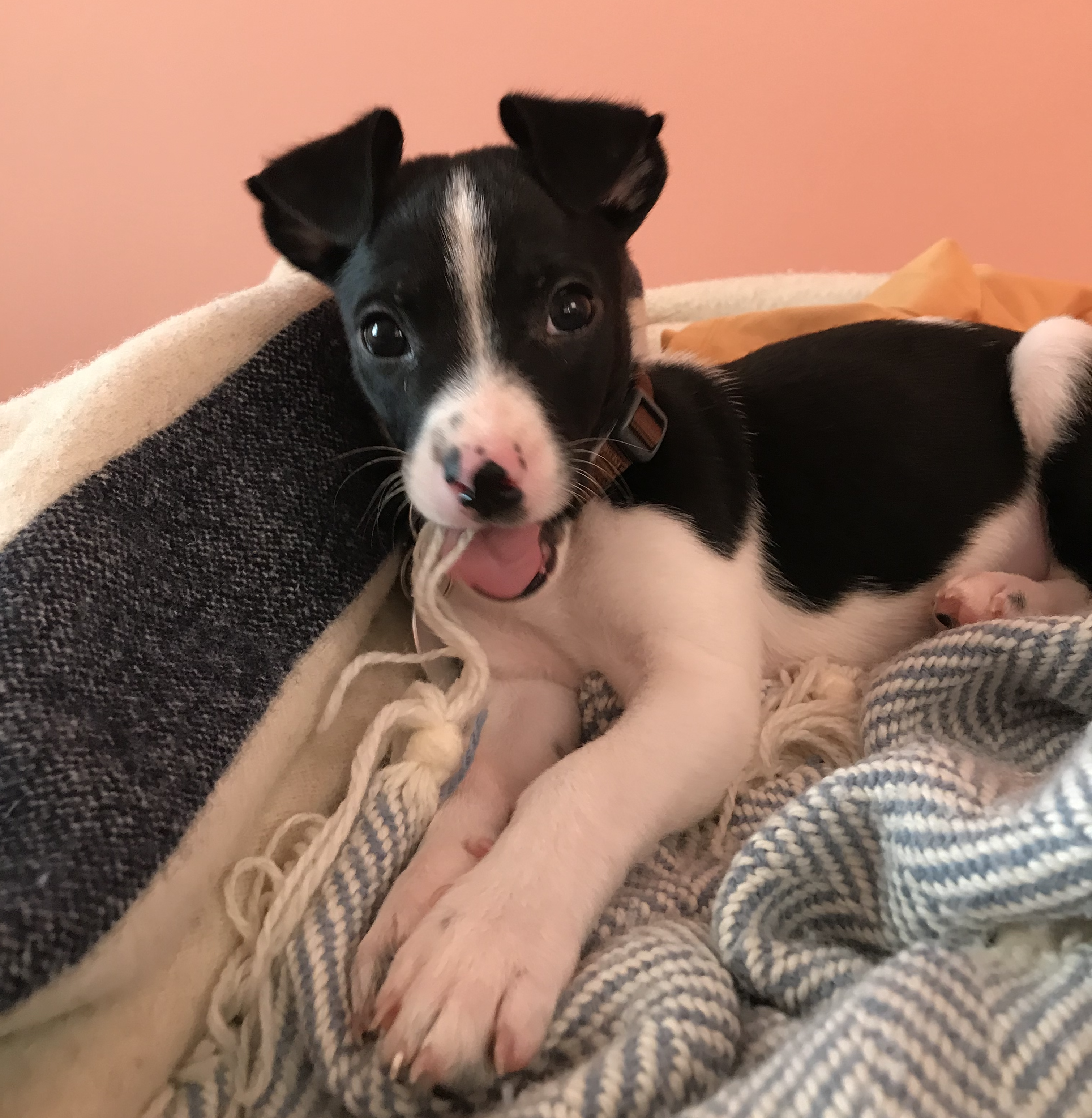 There are lots of dog bags out on the market, but none of them worked well for me. The typical, hard bottom, horizontal tote with a head cut out encouraged Orson to remain upright, on all fours (rather than seated), which meant he was constantly swaying about, nearly tipping out of the bag because of inertia. It also drew all the dog pervs out on the subway to graze my dog, unsolicitedly. 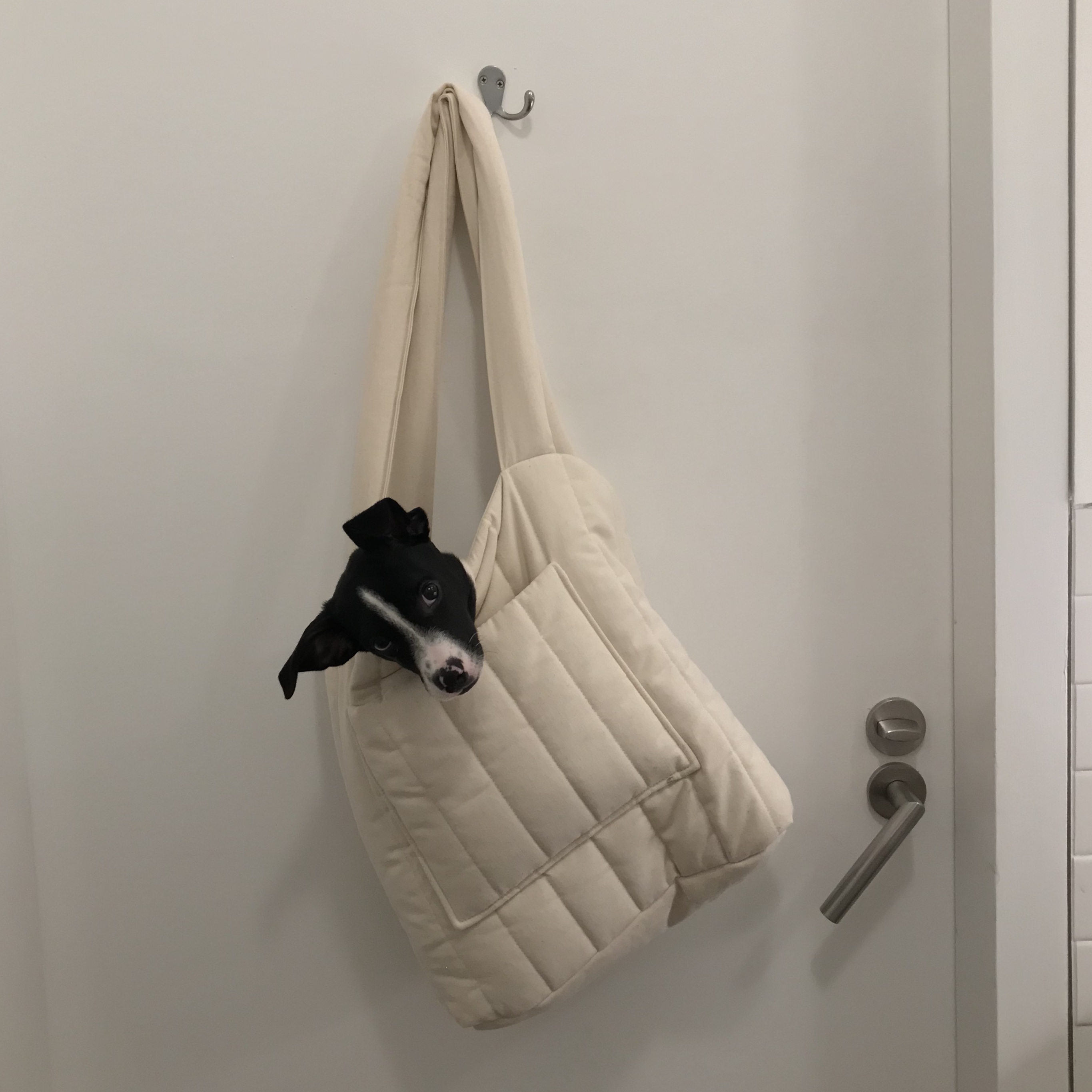 That’s why my go-to bag is this quilted tote by Textilehaus. It’s padded and roomy and has wide, comfortable straps. Orson can sit in it, with his perfect little head poking out the top. There’s an outside pocket that fits a Glossier pouch filled with his lunch, poop bags, and leash. There’s also an inside pocket for his hideous, half-gnawed chews that I’m afraid for the general public to see. When it’s windy, he ducks his head inside, and twice, I’ve heard him snoring inside of it. Perhaps most importantly, it doesn’t make me look like an idiot and I wouldn’t hesitate to use it sans-dog, to carry my laptop or a change of clothes to the gym. (Sike! Did I get you with the gym bit??) 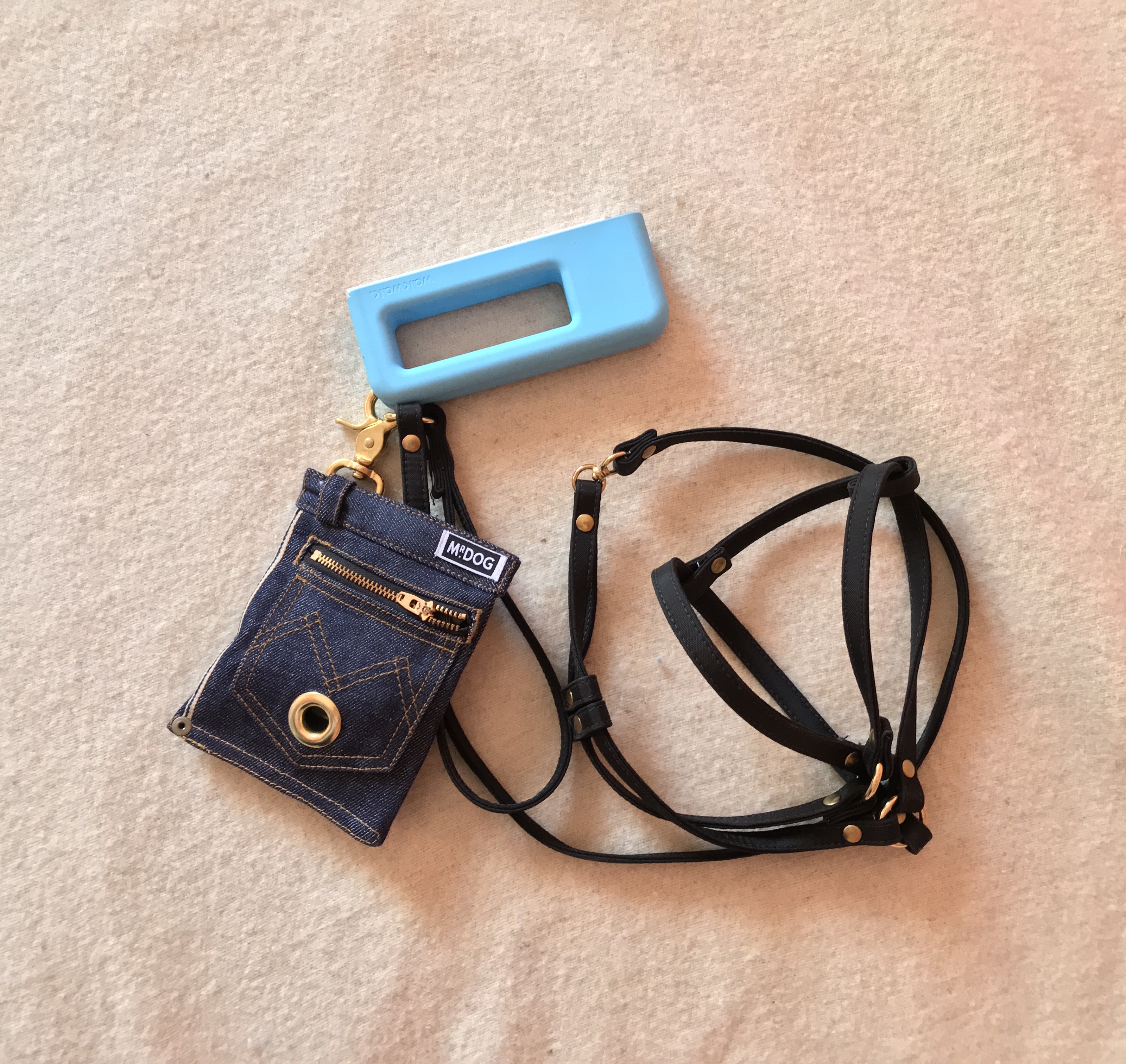 A reference for other enterprising dog parents.

An integral part of having a puppy is constantly rewarding them for relieving themselves. It’s like a sick Faustian bargain where I sell my soul and, in return, I get a lifetime supply of urine. This is why I’ve Frankensteined my ideal leash together from three separate parts. His treats are stashed away in a secret compartment in this handle from The Basic Concept. Clipped to that is this denim pocket from Mr. Dog that holds his waste bags. At the very end of the leash is a practically chew-proof nylon harness that he can step into without much ado. The finished product? A contraption that is greater than the sum of its parts.

Orson’s best friend is a stuffed mallard named Brancusi. (Cusi for short.) He starts every morning by thrashing Cusi around with his mouth, carefully maneuvering his grip to locate the hidden squeaker. Often, my alarm clock is just the sound of a honking duck. He carries it around from the couch to under the dining table, and I often find Orson laying with it in a spooning situation that makes me so jealous I can barely speak.

He, of course, has the Glossier dog toys [Ed note: These were a limited edition offering]. He likes the crinkle of the Boy Brow tube best, I’d guess, considering how much drool it is invariably covered in. He owns rope, tennis balls, rubber balls, and Nylabones and ignores them all.

The concept of dog clothing is Yanny/Laurel-level polarizing. My own thoughts are that, if your dog finds wearing clothes traumatizing, don’t subject them to it! If your dog, however, is a very shivery chihuahua mix that springs up when he sees his hoodie being pulled out of the laundry, forcing his head into it like the chestburster in Alien, then it’s probably fine. This is the hoodie I put on him when it is nippy outside. I had to cut off some of its length because he kept peeing inside of it, but now that it’s cropped, the issue has since been resolved. 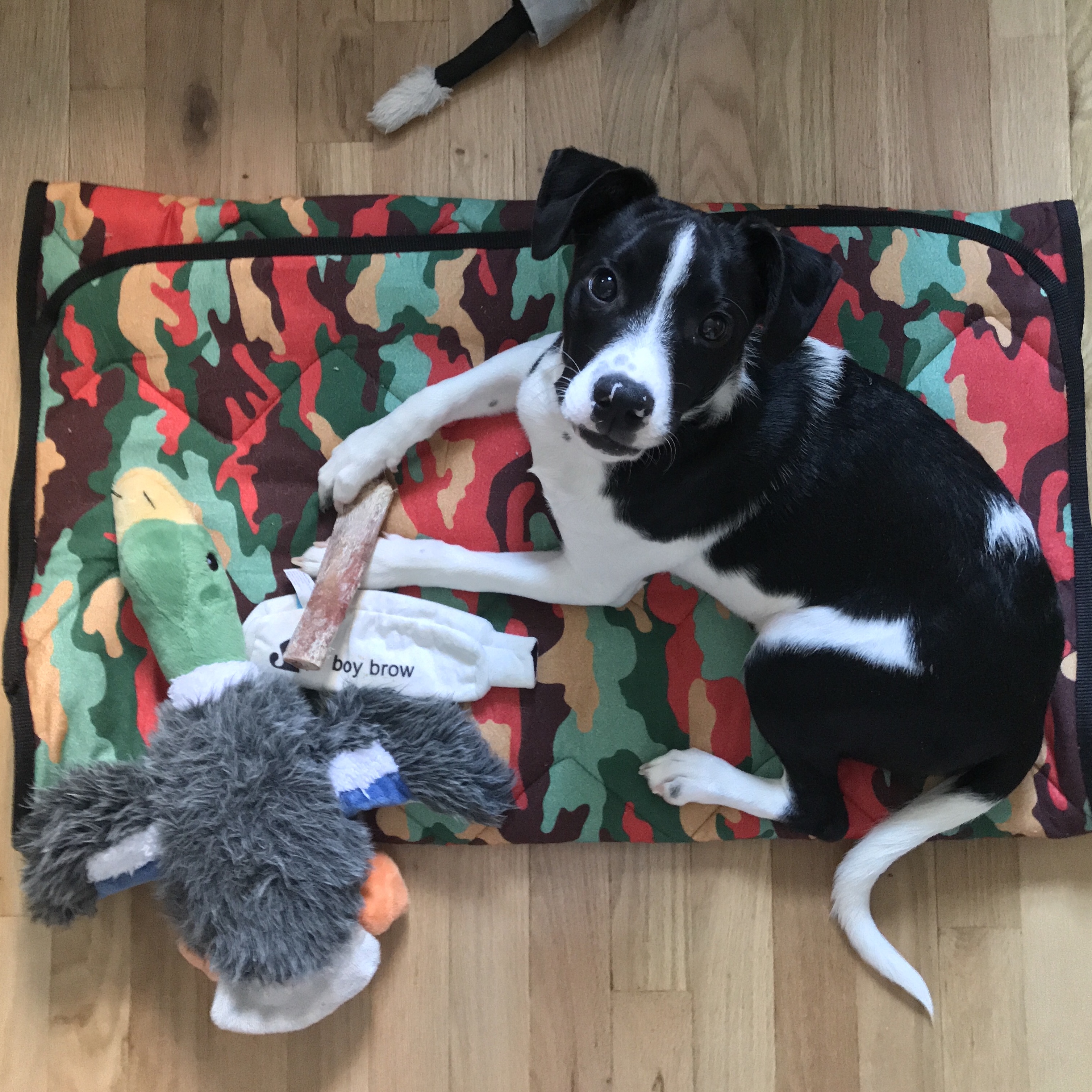 Orson sleeps up on the bed with me, confoundingly, as the big spoon. The rest of the time, he uses this dog blanket. I knew I was a dad when I began to wax poetic about how downright practical it is. Fold it and it’s a dog bed. Throw it on the couch (he’s currently shedding his summer coat) and save me some vacuuming. It’s sewn with nylon thread and webbing which means Orson can go to town on it, leaving it intact, unlike every other blanket he’s come into contact with. The best part is it’s machine washable. No Woolite, no Laundress, no special FlyCleaners instructions. Daddy likey.

Often the first reaction people have when they find out I have a dog is disorientation. “How does a neat freak (you) deal with a sloppy houseguest (pet)?” they think, behind my back. I guess the answer is twofold. Answer part one: Orson isn’t really that dirty. I wipe down his paws and hindquarters with a dampened Viva paper towel after our walks. I also routinely bathe him. He hates it, so the only way I can do it is by holding him in my arms and stepping into the shower with him. He lets out resounding groans of protest that I attempt to muffle with my raspy rendition of "A Whole New World." I soap him up with Malin + Goetz canine shampoo, and hit his paws with a soft nail brush. The finished product leaves him softly scented like neroli (like a Glossier dog would!), without masking his intoxicating puppy scent. Afterwards, I hold him in a towel and feed him guilt treats until he’s dry. 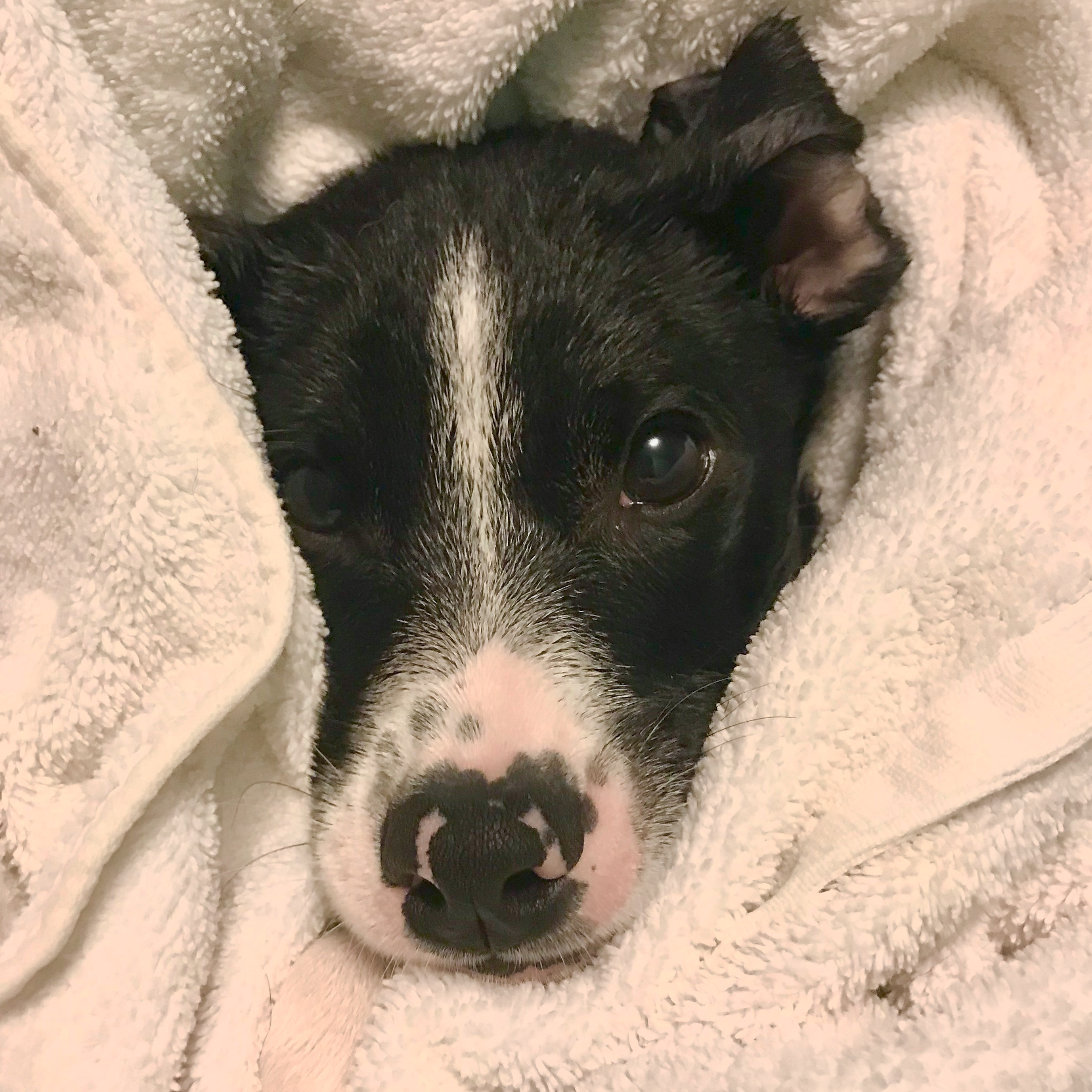 Speaking of puppy scents—left unmonitored, his breath smells like earring backs. A capful of this zinc-based water additive brings it to true neutral.

Answer part two: you kind of just learn to deal with the gross stuff? A younger me bristled at the notion of my apartment being turned into an en suite bathroom. Now? Been there, done that, sang the reprise. He simultaneously feels like a partner, a child, and an extension of myself, so I’ve learned to place the gaze inwards: “He only chewed that up because I left it out.” “It was time to replace those socks, anyway.” “Lint rolling builds character.” Don’t get me wrong, he does plenty of things that disgust me—the juice just outweighs the squeeze.