When Pregnancy Skin Changes Get Weird

“Quick, catch this light!” I said to my babysitter-cousin, Mia, handing her my iPhone to get a shot of my face. We had just carried a double stroller up and down subway steps before arriving home from an outing in Soho, so my skin was exactly the right amount of oily to appear glowing. She captured my right side: “Yasss!” I shouted. But when I looked at the photo of my left side, I was all wide eye emoji-faced. My moles were huge and practically staring back at me. Before pregnancy they had been petite beauty marks sprawled across my skin like sweet little constellations, and now they were more like the chocolate chips in the Insomnia Cookies I stuffed my face with postpartum.

I’d heard about skin discoloration or melasma, I knew stretch marks were pretty much a given, and I had already reconciled with my new varicose veins—however, no one gave me the heads up on how the hormones released during pregnancy can make your moles grow. But, when I posted a selfie about it en route to the dermatologist, friends quietly slid into my DMs confessing the same experience.

At the dermatologist’s office I sat with my nine-month-old, Noah, while Michelle Henry, MD went over the A–B–C–D–E’s of melanoma with me. While I was scared AF that I had waited so long to get them examined, Dr. Henry jumped right in.

A – “So we’re looking for asymmetry, these are symmetric,” she began.
B – “B is the border–nice and smooth. If I were to draw around them, they don’t have any off-shoots.”
C – “C is the color; so the color is nice and brown and even, instead of blotchy.”
D – “And, the diameter is smaller than a pencil eraser,” Dr. Henry concluded.

Thankfully, we didn’t make it to “E,” which stands for “Evolving” or a mole that’s transforming in shape or color. “They look absolutely perfect and benign,” she confirmed. I let out a deep sigh of relief, and then we decided to remove the largest of the two moles and send it for testing, just to get a final confirmation that it was indeed non-cancerous. Dr. Henry injected the mole just below my left temple with a local anesthetic. The last time this happened I pushed out a baby, so I reverted to Lamaze breathing and coached myself out loud: “You got this. You gave birth!” A bit dramatic, I know, but I was scared as hell to have anything on my body sliced off clean. 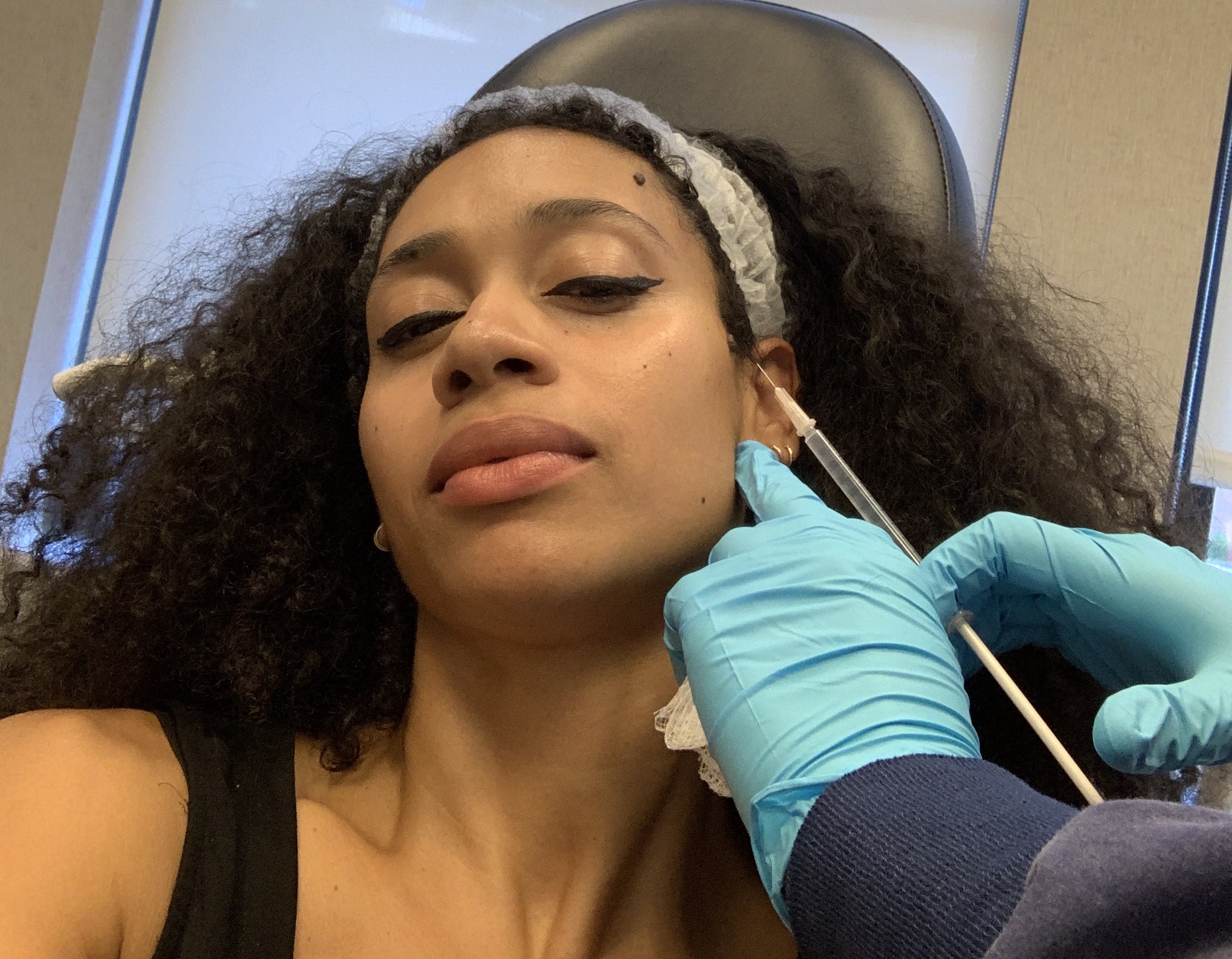 I had so many questions. Could I have avoided this growth? Taken in a little less sun in Jamaica during my second trimester? “Sun plays a role but it’s especially hormones,” Dr. Henry reassured me. “Do you know how you get the line on your belly during pregnancy? That’s an indicator that all of those hormones are really turning on your pigment cells. So it’s not odd that you’re going to get darker or larger moles. We still have to evaluate them because we do see melanoma in pregnancy and post pregnancy,” she explained.

Of course, the list of pregnancy-related skin changes doesn’t end there. There’s hyperpigmentation in freckles, scars, and in some of your already dark areas like nipples, areolas and down below. Skin tags may pop up or appear larger on your face, neck, upper chest and beneath your boobs; you also might see hair growth in random areas. I could pretty much check all of these boxes. Now, while these changes weren’t any major cause for concern, understanding how your body can change during this important life event puts your mind at ease.

I was sent on my way with two tiny tubes of Aquaphor for healing, steri-strips to keep the area covered, and a scrip with two of Dr. Henry’s favorite sunscreens: SuperGoop’s Unseen and EltaMD UV Clear.

Two weeks later, test results thankfully confirmed the mole was benign. All that remains is a circular shadow of where my mole and concerns once stood.

Photos via the author.