Why I Spent My Summer Following The Dead

We may be hanging on to the last weeks of summer, but my summer ended when Dead and Co., the greatest Grateful Dead cover band of all time, played its last show. The band consists of three-out-of-four living members of the Dead, and three additions—if you’re into John Mayer, you’ll be delighted to learn that he’s on guitar. I got into the Dead via my dad, but grew into it in college. It went well with the pot-smoking, Cherry Garcia loving parts of myself—but that’s not quite enough to justify why I’ve taken planes, trains, and automobiles (yes, really, all of them) to 16 Dead and Co. shows. In the past three years. With my whole family—two parents and two brothers. Let me try to explain.

In many ways, the shows are a time capsule—a window into a different time, kept slightly cracked only by the music and the people who love the music. Being a Deadhead very much feels like a bigger-than-yourself, amorphous, historic thing. It’s easy to fall down a hole of researching the lyrical Easter eggs or subcultures—but even on just the surface, the music is fantastic. So technical. So mesmerizing. Sometimes the band tours in the fall, but the summer tour is better—outdoor venues more easily facilitate bandanas as tops, laying in grass, and passing hand-rolled joints between friends and strangers who by the end of the show become friends. And my family members become friends, too—talking about the Dead makes us so much closer. It makes us do crazy things like follow them on tour and road-trip in a cramped car for full days at a time. 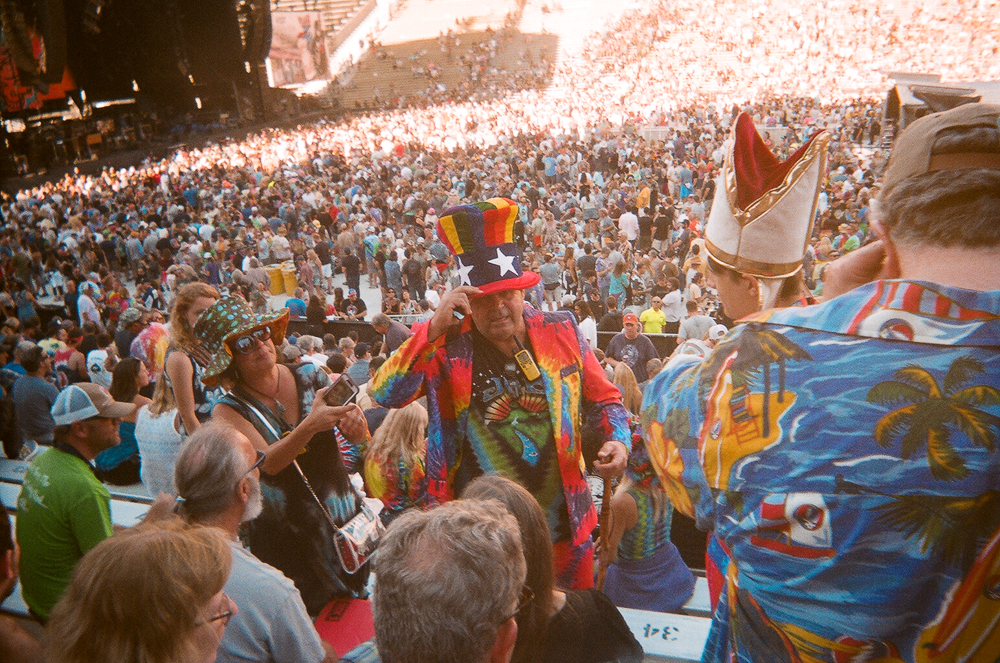 There’s a lot of waiting around, between the travel time and the intermissions, so we try to guess which songs they’re going to play each night. A good place to start narrowing it down is the previous night’s setlist—they rarely repeat a song back to back. Further clues include city, day of the week, and proximity to national holidays. Some songs are kept for special occasions only—like “Ripple,” a most beautiful and notoriously rare little diddy. If you want to hear “Ripple,” go to the last show of the tour. And if they’re playing two shows in your city, go to both. The songs will be completely different. 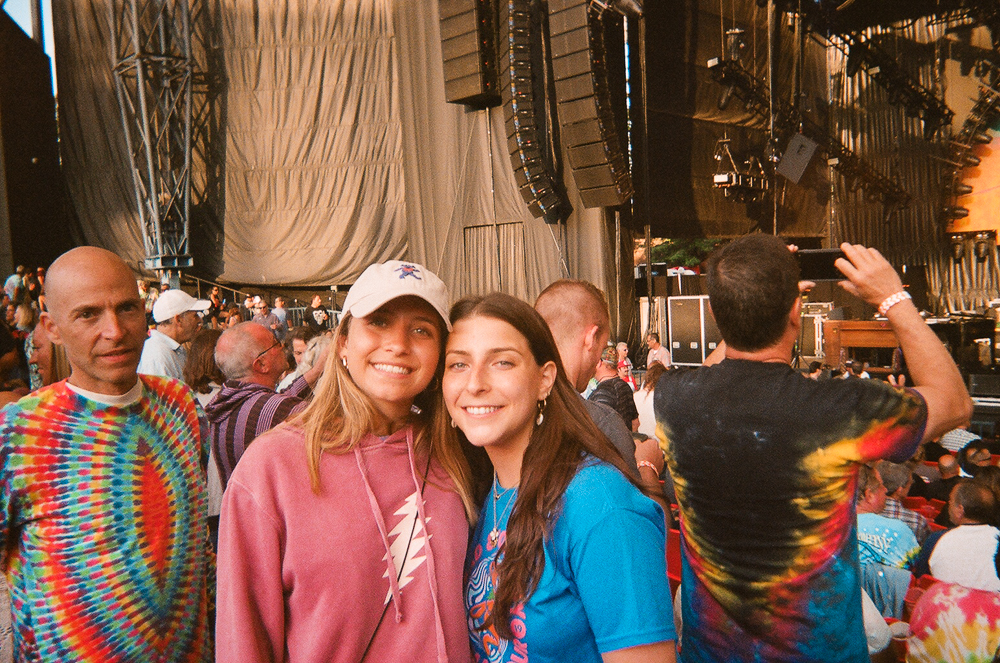 There are certain... quirks about Dead shows that you should probably know about before going in. For example, Drums and Space. A surviving artifact from the original Dead, Drums and Space is a segment where everyone leaves the stage save the two drummers, who improv heart-pounding, psychedelic, often completely discordant sounds for around half an hour. Or the Spinners, members of a religious maybe-cult that take up the back eighth of the venue. They wear voluminous garb and twirl through the show. Or Shakedown Street—the Dead’s answer to a tailgate. It’s always in the parking lot, and there’s always white-peaked tents and half-naked stringy-haired toddlers and rainbow-hued nitrous balloons. Someone is grilling onions—someone is loudly advertising brownies laced with pot. Everyone is selling tie dye. It makes me laugh to think of all the people spending their paychecks on SS19 tie dye when the greatest, most perfect ones are in the flatbed of a pickup truck in the Citi Field parking lot for 20 bucks. I bought a pair of sizeless tie dyed jeans without trying them on and they fit like a glove. It’s got to be the magic, right? 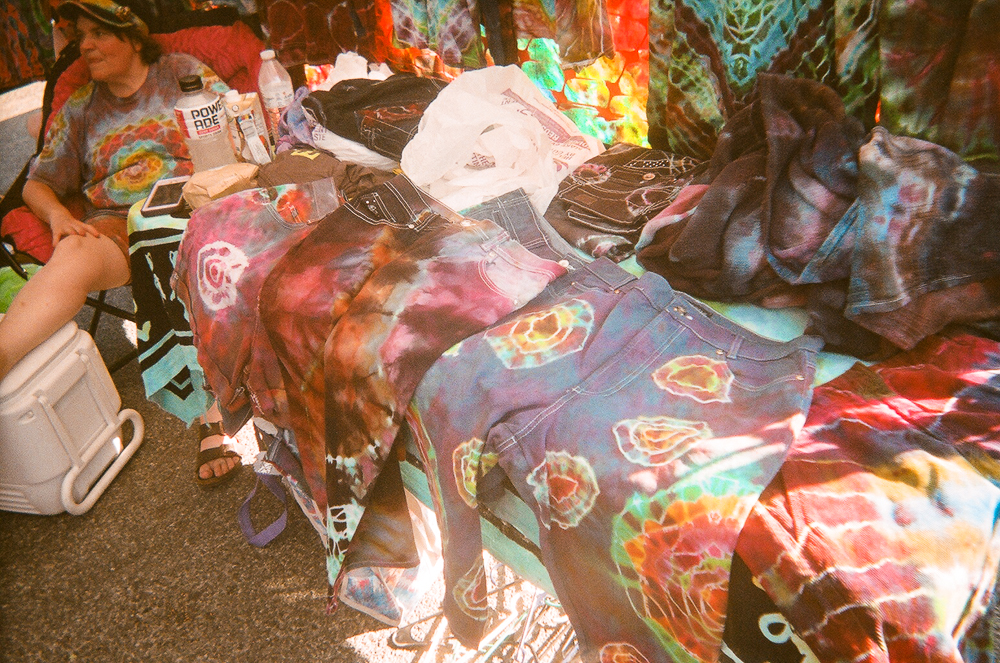 I always pack light—for clothes, skincare, what have you—because a bigger suitcase won’t really fit in the car. The only wild card is bunch of rainbow eyeliners, but I don’t even use them because I’m waiting for them to feel right, and they never do—a bare face and sunscreen is better for the shows. Au naturale to blend in with the hippies. The crowd is SO mixed, and the people-watching is the best. I love to see the different ways people move their bodies, and try to move mine the same way. I love seeing two 60-something-year-olds so into each other that they’re making out like teenagers. I love to watch women swaying with babies in giant headphones slung over their arms. I love it all so much! It’s such an unperformative beauty, so different from everything else I’m used to seeing—but it is so, so beautiful. A little bit sweaty, a little dirty, happy. I’ve learned a lot about sex appeal from the hippies.

Après-show, I like a grilled cheese—it doesn’t matter where we are. I have eaten so many midnight grilled cheeses in so many cities. Did you know Subway will make you a grilled cheese if you ask very nicely? Oh yes, they will do it, and it will taste bad but satiate your hunger just fine. And with every grilled cheese, the number of shows left in the tour gets fewer and fewer. My dad gets all weepy thinking maybe this is the end—eventually I go back to New York, my brothers split up for Louisiana and Missouri, my parents return to Florida. But sure enough November rolls around and another summer tour is announced, keeping my window propped open for just a bit longer. Eventually it will close, and my borrowed experiences in the flower-power 60s, psychedelic 70s, and all-American 80s will take on their own tint of nostalgia and fade to real memories. But for now, say you’ll meet me on Shakedown next summer?